In each installment of Pastry Cases, sweets fanatics and lovers of (most) things baked Charlotte Druckman and Gabriella Gershenson (of Every Day with Rachael Ray) share a favorite confection, slice of cake, ice cream scoop, or other delectable delight worth the sugar high—and the trek. In this week's edition, the fry girls dig into a baker's dozen of the very best doughnuts in New York City, at none other than the Doughnut Plant. 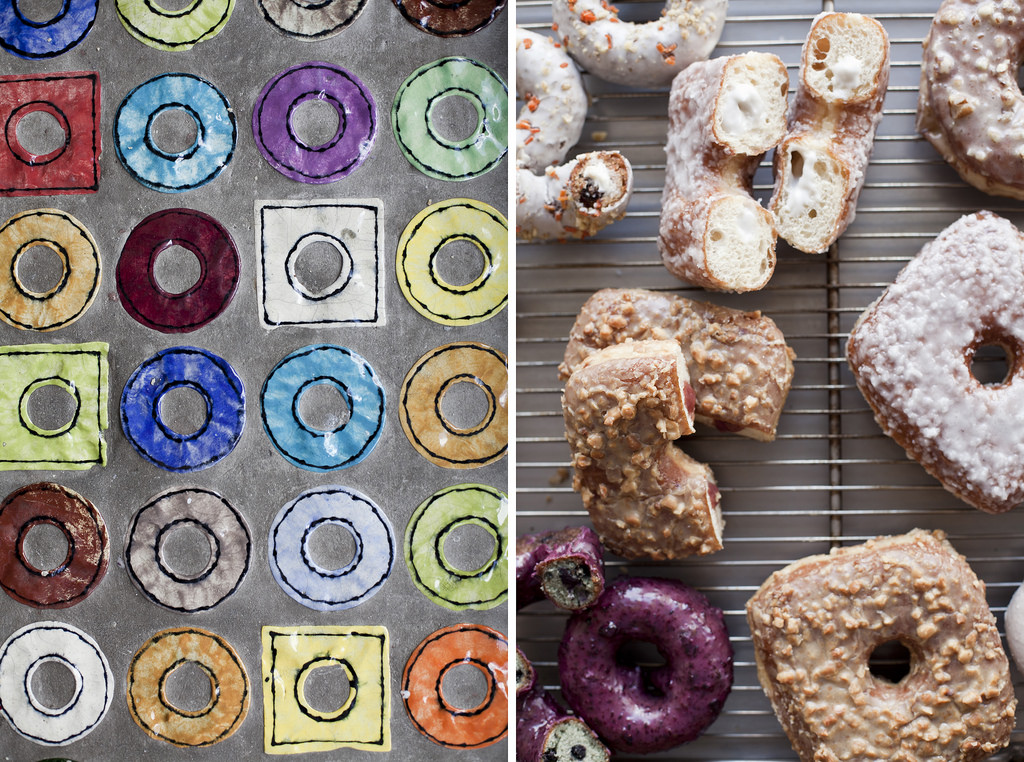 [From left, signature tiles made for the Doughnut Plant by Mark Isreal's father, Marvin, who is a sculptor; an assortment of Doughnut Plant doughnuts. All Photos by Paul Crispin Quitoriano]

GG: Hello…non-doughnut girl? I didn't realize this when we set off on our latest mission, to the DOUGHNUT PLANT, but Friday is national doughnut day. I don't typically support those things, but it feels like a sign.

CD: Harrumph. I think a few over-enthusiastic people decided to take the D in D-Day to mean doughnut.

CD: Yes, boys, hide your laptops from the prying eyes of your lovers. We're about to get you off.

GG: Well, you are the first person I ever met, a sweets lover no less, who does not care for doughnuts! I love them, and have the utmost respect for Doughnut Plant's, which is why I brought you there.

CD: Correct. I am indifferent to them. I could take or leave them. I'd rather be eating pie. But, now that you have introduced me to Doughnut Plant, I have a newfound respect for a well-made doughnut, and if I were to crave one, I'd go to Doughnut Plant. 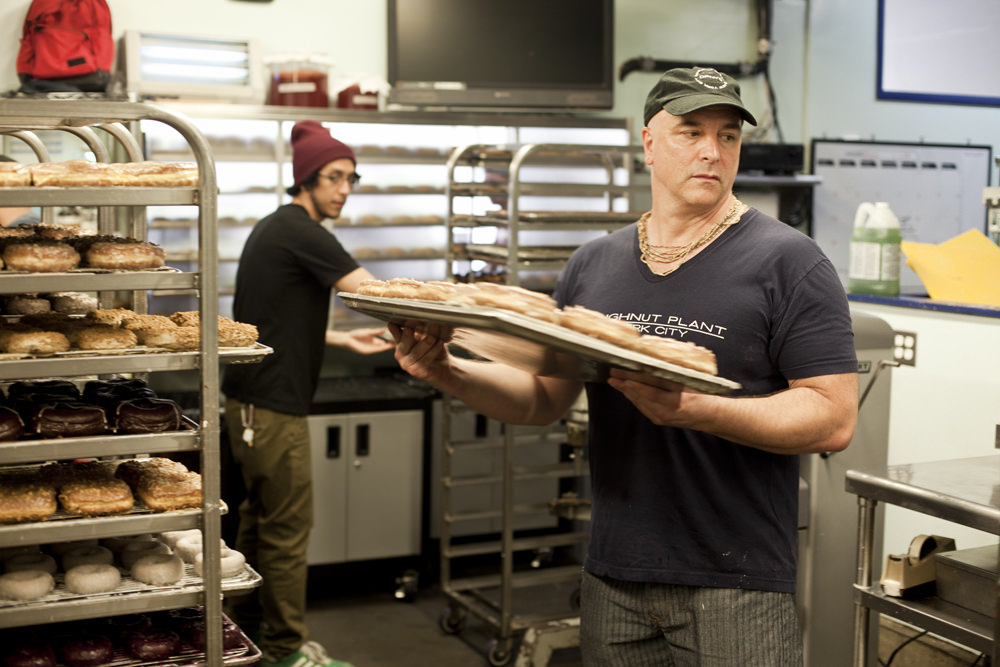 [Mark Isreal, the mastermind behind the Doughnhut Plant.]
GG: That means that my mission is complete! I took you, Charlotte, to have a degustation of doughnuts at the Chelsea Hotel location, with none other than Mark Isreal, who, in my humble opinion, is a real doughnut artisan. And not in the fakey buzzword sense of the word. He opened his first store in 1994 on Grand Street. His company turns 20 this year.

CD: He was an artisan before the word was co-opted and he is a wonderful human, and doughnut maker. There's something so soulful there—in how he expresses himself in person and through those doughnuts. 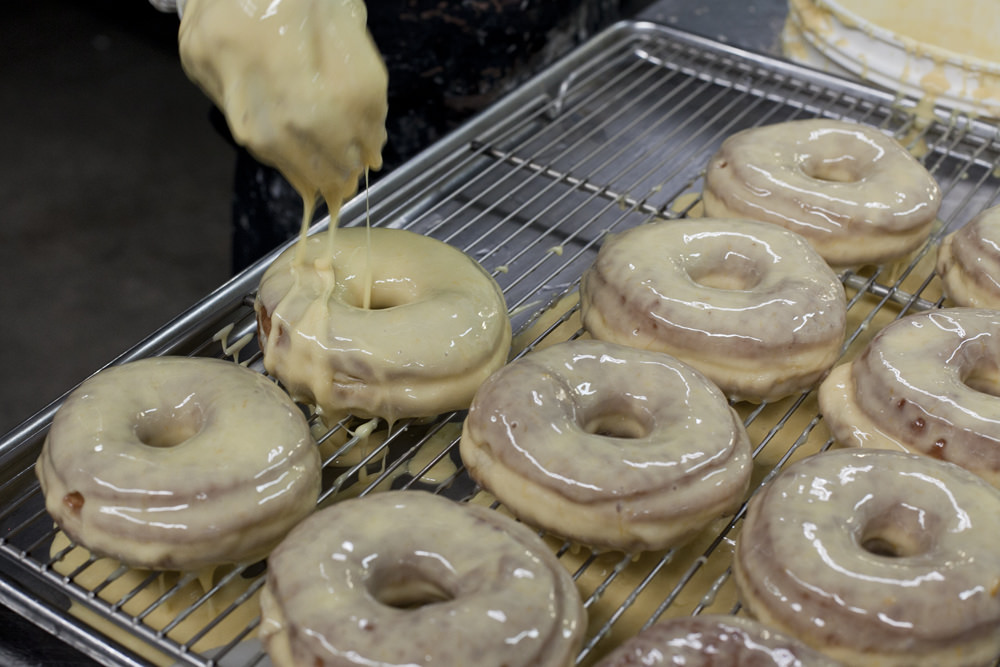 [On goes the glaze for the Doughnut Plant's buoyant yeast doughnuts.]

GG: I couldn't agree more. I wanted you to taste his stuff because I feel that he is always striving toward perfecting his doughnuts, whether it's the yeast dough tires or the daintier cake numbers, or his little filled "dough seeds," which are somewhere between a munchkin and regular sized doughnut. His grandfather was a baker and made doughnuts, but Mark never managed to taste them, because he died when Mark was so young.

CD: In Greensboro, North Carolina, right? So he's a Southerner with a legit doughnut legacy.

GG: Yes. Mark started making doughnuts that "suited his lifestyle," he told us. He has a history of working for health food cafes (he managed Angelica Kitchen), and wanted to create a doughnut made from ingredients with integrity, all in the service of deliciousness. So he started incorporating fresh and seasonal fruit into his glazes, organic flour into his doughnuts, etc.

CD: He said that health wasn't his priority, that flavor was, and that he believed by putting flavor first, he'd end up with something healthier, naturally. For me, the coconut cream doughnut embodies that. You had said it was imperative I try that doughnut, and when you described it, you mentioned that Mark uses fresh coconuts, and that they hack them open on-site. I love fresh coconut, so I was already—relatively, since it's a doughnut—excited, and that doughnut gave me the pure shot of coconut I'd been hoping for. 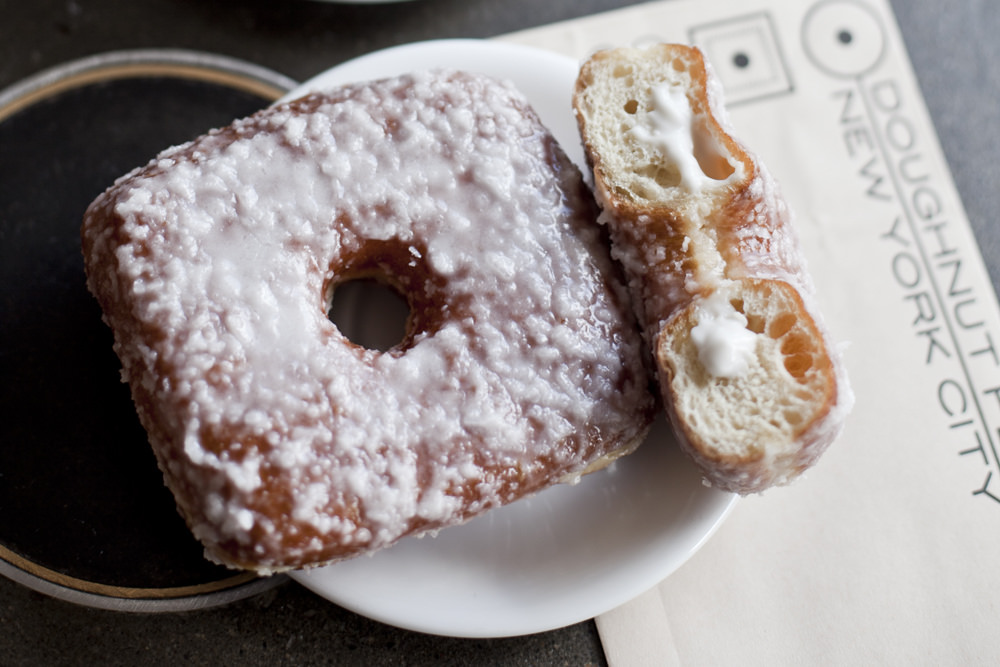 [The Doughnut Plant's coconut cream doughnut is made using the milk and meat of fresh coconuts.]

GG: There's coconut meat in the glaze, and coconut milk in the custard center.

CD: I love how Mark uses cream in his doughnuts, because it's not gratuitous; it really just gives the doughnut some moistness, and it almost dissolves into the pastry, so it's not too thick. The cashew-orange blossom dough seed is another excellent example. I'm so glad you insisted I try it.

GG: It tastes like a Middle Eastern sweet, which I love.

CD: Yes. The orange blossom is muted, in a beautiful way; the cashew's nuttiness takes some of the perfume out of that floral element.

GG: It's delicious, but it's also singular, and not in a gimmicky way. Some bakeries have fancy flavored doughnuts, like hibiscus or what have you, but they're fancy in name only. Nothing about them tastes special. Mark is such a nut that he even makes his own peanut butter and jam for his PB&J doughnuts

CD: Again, before it was trendy. 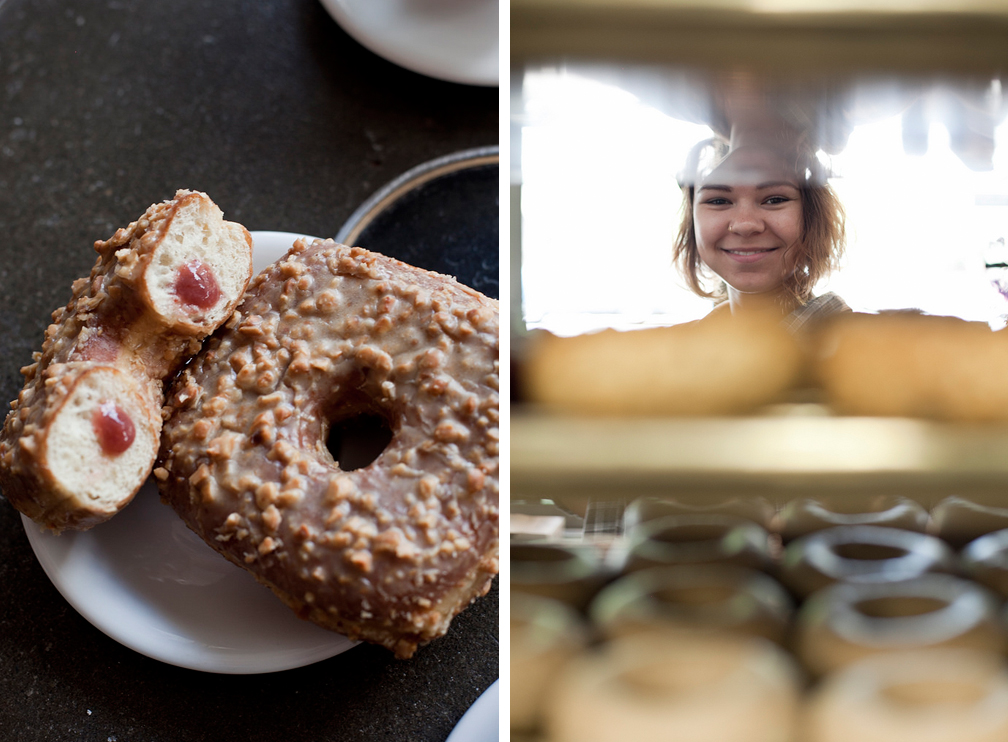 GG: Because it was the only way he would know how fresh the PB and J were!

CD: His strawberry jam is beautiful—in flavor and color. It looks almost like red applesauce. That doughnut, by the way, was the closest thing I've had to a literal interpretation of a PB&J sandwich in pastry form in a long time. It's a flavor combination that lots of pastry chefs have fun with, and I often like the results, but this really gave you that old-fashioned PB&J experience.

GG: Most of his filled doughnuts, like the PB&J and coconut cream, are shaped like squares, which makes them look fun and unique. I love that Mark's doughnuts aren't only delicious; they're creative and beautiful. 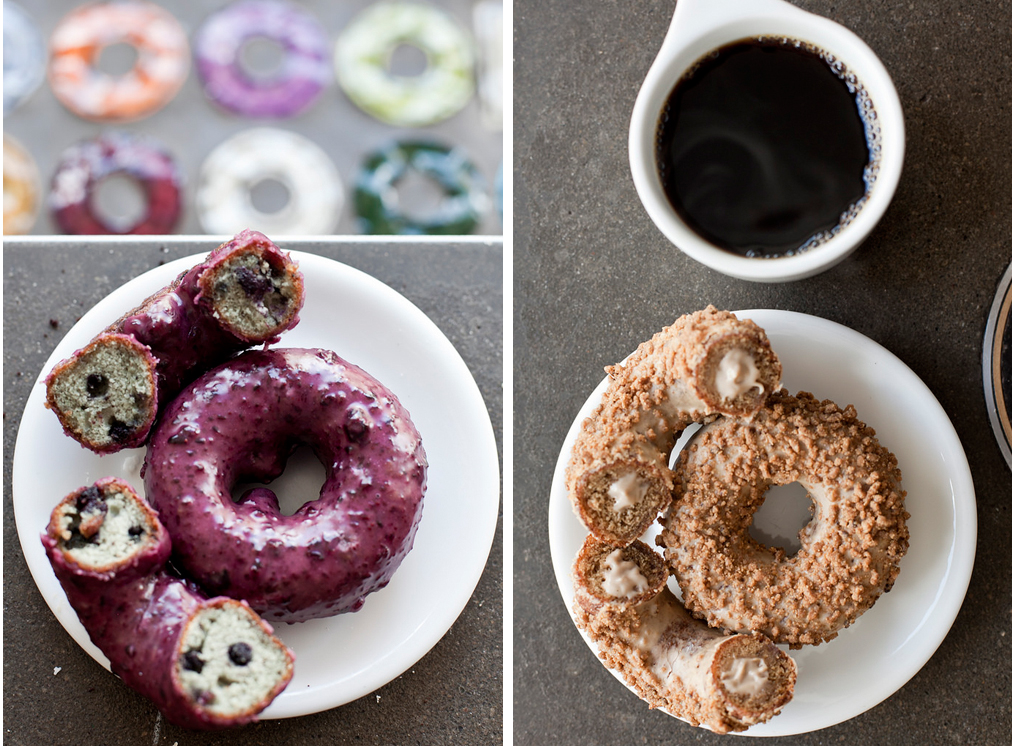 [Wild blueberry cake doughnuts have whole berries in the batter and berries in the icing; the Doughnut Plant's newest flavor is coffee cake, a coffee-flavored cake doughnut with a ribbon of mascarpone filling, coffee glaze and a coffee streusel topping.]

CD: It reminded me of Pop Art. There are whole wild blueberries in the batter and then the blueberries in the glaze create this almost neon magenta effect. So first you see that bright, purply-pink. Then you bite in, and you get these navy blue, 3-D polka dots. Ben-Day Dot Doughnut! Sort of. I can't believe I'm going to say this, but I think the blueberry muffin may have met its match. And, as I suspected, I prefer cake doughnuts to the yeast ones. I also loved that coffee cake doughnut…or is it coffee-cake cake doughnut?

GG: That was the star of the day. Coffee cake doughnut. Game changer. I can still taste it. It's Mark's cake doughnut, which is like a sweet little cake with a nice tender crumb. 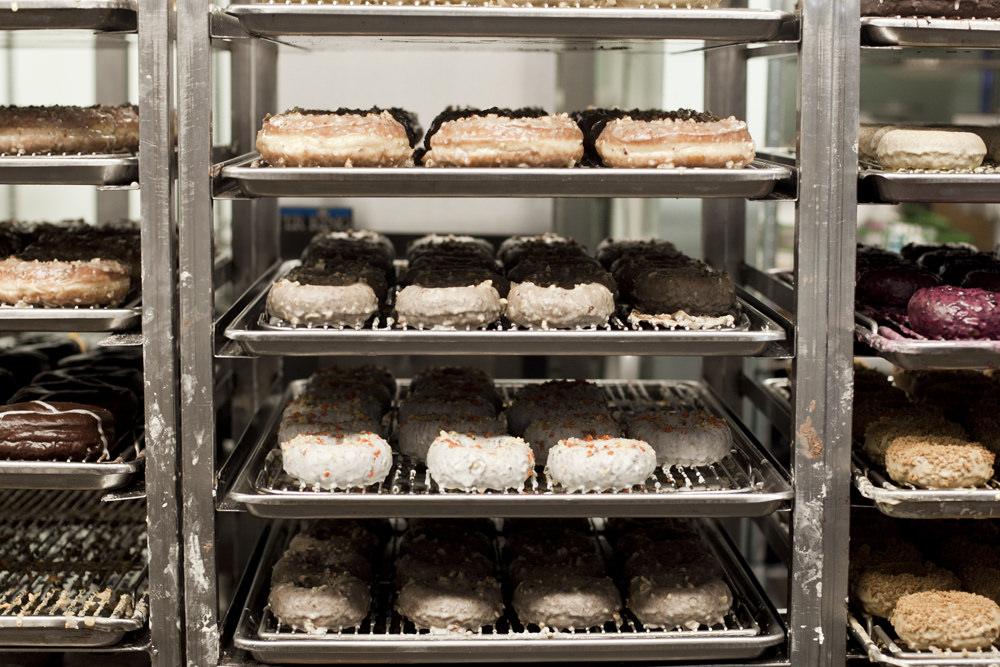 CD: For me, it took the crumb topping of a coffee cake and turned it into a doughnut, but then, it was COFFEE-flavored, which, really, why isn't all coffee cake?

GG: Right, it's a coffee cake that actually taste like coffee. But it has the breakfast quick bread nature of a coffee cake and the crumble, too.

CD: And then he had that mascarpone filling that he said was inspired by tiramisu, but for me, it was purer in coffee flavor than tiramisu and I liked that. It just added a textural contrast to the sandy cake.

GG: It's a mashup that's better than a Cronut.

CD: Oh please, don't even use that word in the presence of Doughnut Plant greatness. Insult.

GG: I made you try a simple yeast doughnut with glaze. I wanted you to see what I see, which is the amazing golden color of the skin and bubbly buoyancy of the interior of the yeast doughnut. You bite in, and it slowly bounces back, allowing you to see all the small lovely holes that make it so airy. People typically don't notice such things, but try that the next time you have a non-DP doughnut. Unlikely to happen.

GG: I also feel it's important to note, because people note such things when they discuss doughnuts, that these were GREASELESS. The cake tastes like cake, the yeast dough like wonderful elastic tender soft goodness.

CD: I'd like to see where all these other doughnut knock-offs are in 20 years, because I'm not sure many of them will still be standing, but I know Doughnut Plant will.