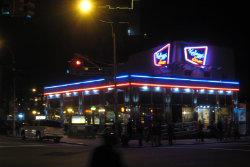 1) The Dying Breed of the Diner:
Nikos Katsanevakis, the manager of Kellog's Diner in Williamsburg, talks to the guys of the show Eating Disorder, about the ins and outs of running a 24-greek diner institution in the heart of Williamsburg. 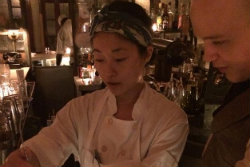 I've worked in such great grand houses that there was someone taking care of that. It was almost as if you didn't think that someone had to do it, you just came in and you cooked and you made food beautiful and made everything great, and this is like real life. Like, if the dishwasher doesn't show up, what do you do? You're too good to wash dishes? So I've washed dishes, I've shucked oysters, I've gone behind the ice machine and changed the hose, I've fixed the walk-in, I've defrosted things, things that I never thought that I'd ever have to know. 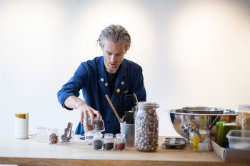 3) Spicemonger Lior Lev Sercarz:
On this week's episode of the close-up on all things food PR, All in the Industry, Shari Bayer spoke with Lior Lev Sercarz, chef, spice master and owner of La Boîte. Here he is, broadening the scope of good spice:
You don't even need to cook to use spices. You can sprinkle them on something that's already made- that's ok if you don't like to cook. 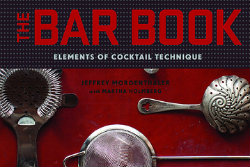 4) Jeffrey Morganthaler of The Bar Book:
Damon Boelte of The Speakeasy spoke with bar manager at Portland, Oregon spots Clyde Common and Pepe Le Moko, and the author of The Bar Book: Elements of Cocktail Technique:

Recipes and flavors are so subjective, which is great! We don't have to agree about the proper proportions for a whiskey sour because there are so many different palettes and preferences. One thing we can agree on is that we should strain the lemon juice before the whiskey sour so there's no pulp. The technique is more objective, which is fun for me. 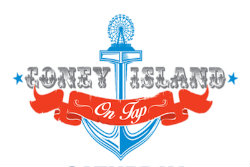 New York state has a tremendous fraternity of brewers and beer professionals. There are more and more every dat! it's exciting - there's room for everybody in craft beer. We see it as a privilege to be able to go out there and spread the word.