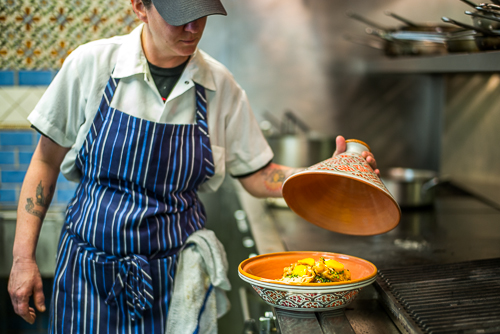 "I wanted the flavors to work together but also to be true to the food of the region," says Claudette's chef de cuisine Koren Grieveson of her chicken tagine. By region she doesn't just mean North Africa, where the tagine is a popular cooking vessel, but also Italy and most importantly Provence. It is there that the chef finds a "melting pot of influences" incorporating not just local flavors but those from Marseilles, Corsica, Tunisia, and Morocco. While a tagine is traditionally used to both cook and serve a dish, it didn't makes sense in the restaurant setting "when you are serving 30 a night" says Grieveson. Also, putting a scalding hot dish in the middle of the table "legally isn't a smart idea," the chef explains. Instead the elements are prepared separately ahead of time and then combined at service before being assembled in a tagine.

Grieveson brines chicken thighs for just under a day in a solution that includes salt, sugar, and mint before browning them off and then braising them in a mirepoix of carrot, celery, onion spiked with apricot, dates, mint stems, and mint leaves—marrying French and North African technique and flavor profiles. Bulgur wheat, which she employs for its "great chewy" texture and "nutty" flavor, is cooked ahead of time in the braising liquid from the chicken and then reheated at service. It forms the bed of the dish, which is then topped with zucchini, eggplant, dried fruits, herbs and nuts.

Editor markup for Koran Grieveson's Chicken Tagine at Claudette. This is only visible in the story editor.