Roy Choi, the chef/restaurateur/author that gave the world the Kogi Truck and L.A., Son, is in New York City right now, checking out the scene. After dining at Ssäm Bar last night, Choi had an epiphany: "Don't know how long it will take but I know I'm ready to try and make New York happen. Should be a fun journey. #next" Then, Roy got a sign that he should move out to New York: 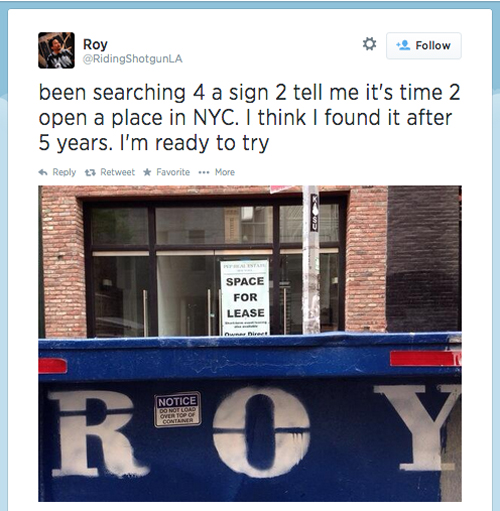 Clearly, Choi is meant to move to New York City.

Right now, the chef is busy with running his new hotel project Pot, as well as well as a fleet of Kogi trucks, and sit-down restaurants Chego, A-Frame, and Sunny Spot. But in all likelihood, a New York restaurant from Choi would be a massive hit. Perhaps Roy should talk to his LA colleague Ilan Hall about the process of expanding from Los Angeles to New York City, then he can make up his mind.
· @ridingshotgunLA [~ENY~]
· All Coverage of Roy Choi on Eater LA [~ENY~]