First, a brief history of tapas bars in New York. In the late 1930s as the Spanish Civil War wound down, leftist refugees (paradoxically known as "Republicans") streamed into Greenwich Village, eager to tell their stories of Fascist persecution. Many started Spanish restaurants there and in surrounding neighborhoods. In addition to formal dining rooms, many of these places — including Rio Mar in MePa and El Quijote in the Chelsea Hotel — boasted dark, red-upholstered barrooms where the odor of garlic wafted through like an ocean breeze. While the dining rooms were busy peddling massive servings of paella to hungry, cash-strapped bohos, the bars served snacks to homesick Spaniards, including grilled sardines, flaming chorizos, and poached octopus washed down with wines, sherries, and sangria.

Numbering perhaps two dozen, these combo restaurants and tapas bars dominated the city's Iberian food scene for 60 years, until a startling event occurred. A decade ago Mario Batali launched Casa Mono ("Monkey House"), a newfangled type of tapas bar with no restaurant attached, serving regional Spanish small plates with Italian twists. The orange-clogged dude also took what had been a placid institution and added a new level of theatricality, allowing you to admire a cook flipping coxcombs on a broad griddle. And Casa Mono elevated the runny poached egg to a pinnacle it would never descend from.

Not long after Boqueria debuted, named after a Barcelona market. If Casa Mono was a carefully constructed one-act play, Boqueria was a three-ring circus. The minute you came in the door, there was a gal madly slicing things in the front window, and the entire place — which featured raised tables and felt like an airline departure lounge — was constantly abuzz. But though small plates of charcuterie, bread dips, and pan con tomate attracted the most attention, these places and the imitators that soon followed insisted on backsliding on the promise of a real tapas bar by offering full-blown entrees that competed with the small plates.

These two establishments begat the modern New York tapas bar, where you were invited not only to graze but to sit down and eat a full meal. But with international attention currently swinging from Catalonia's Ferran Adria to the Basque country's Andoni Luis Aduriz, it was inevitable that some new restaurant would want to chuck the sit-down menu and take these institutions back to their roots in the famous pintxo bars of San Sebastian. That place is Donostia. 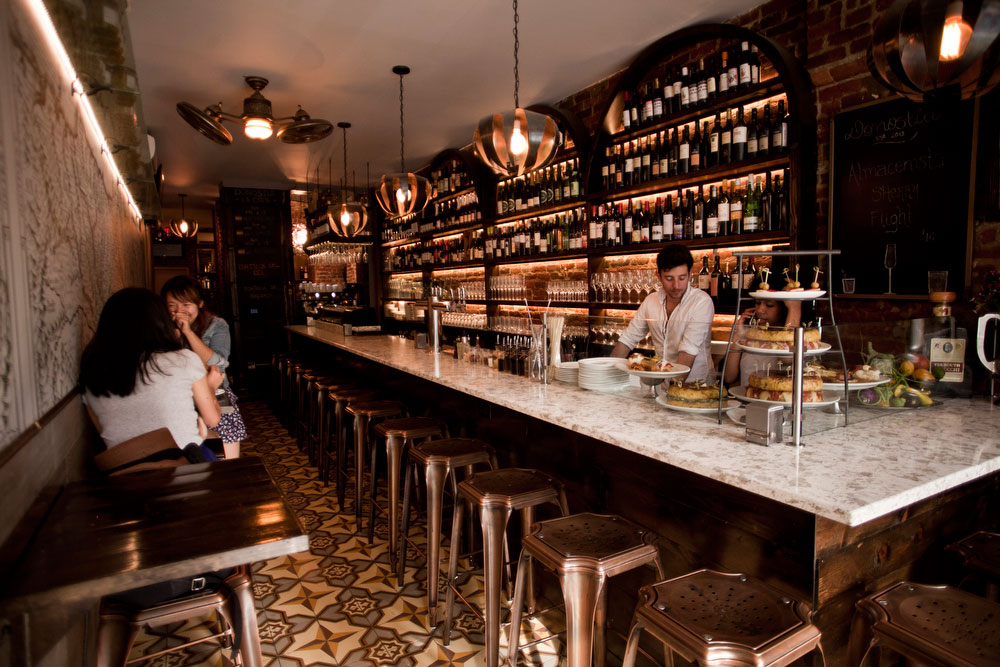 Located at the northeast corner of Tompkins Square Park, Donostia is the Basque-language name of the city and tourist mecca of San Sebastian. In case you didn't get the message, an antique map of the Basque territory is repeated three times on the wall. The bar is gray-splotched white marble. The lighting consists of tortured metal globes like an eagle's talon in the deep narrow barroom, and a nifty chandelier made of wine glasses in a semi-private room toward the back. A third room allows tapas eaters to survey the bare-bones food prep area. With the facade flung open in fine weather, the place takes full advantage of the park, and there's nothing quite like sitting at one of the raised tables in front drinking a glass of sweet sherry and nibbling a pintxo or two as the sun sinks behind the Temperance Arch.

The function of a real tapas bar? It's a place to have a drink or two in the evening and a handful of snacks selected for their sharp flavor and eye-appeal. The food represents a hunger-deterrer, not a meal. The same implied advice pertains to Donostia: Have a drink or two, but don't try to eat dinner, because if you do, you'll be disappointed. But as a place to snack and explore the alcoholic beverages of Spain, Donostia is unparalleled. The food menu sprawls across two folio pages in a whopping 17 categories, but is reducible to a small collection of dried, pickled, and canned ingredients repeated in several small-plate formats. Don't expect any of the current dining tropes of fresh, local, or sustainable to be observed. This contrariness alone makes Donostia worth visiting.

As a place to snack and explore the alcoholic beverages of Spain, Donostia is unparalleled.

When you first arrive, stick with Banderillas ("flags," $2 to $4), delightful toothpick-borne combinations of one or two bites, and Montaditos ($2 to $6), open-faced sandwiches of three or four. In the former category be charmed by gilda: two green olives and two pickled peppers skewered with an anchovy – a pintxo that originated in San Sebastian in the 1940s named after a Rita Hayworth movie; and chorizo picante: a single slice of spicy sausage, a wedge of aged manchego, and a streamer of pimento. These banderillas look like miniature chivalric pennants carried into a battle of flavors. The montaditos are similarly compelling, edible bread-mounted sculptures on which you might find a dab of salt-cod puree, a tentacle of octopus, brine-pickled cherry tomatoes, blue-veined cabrales cheese, a baton of eerily white asparagus, or the best canned sardine you've ever tasted. 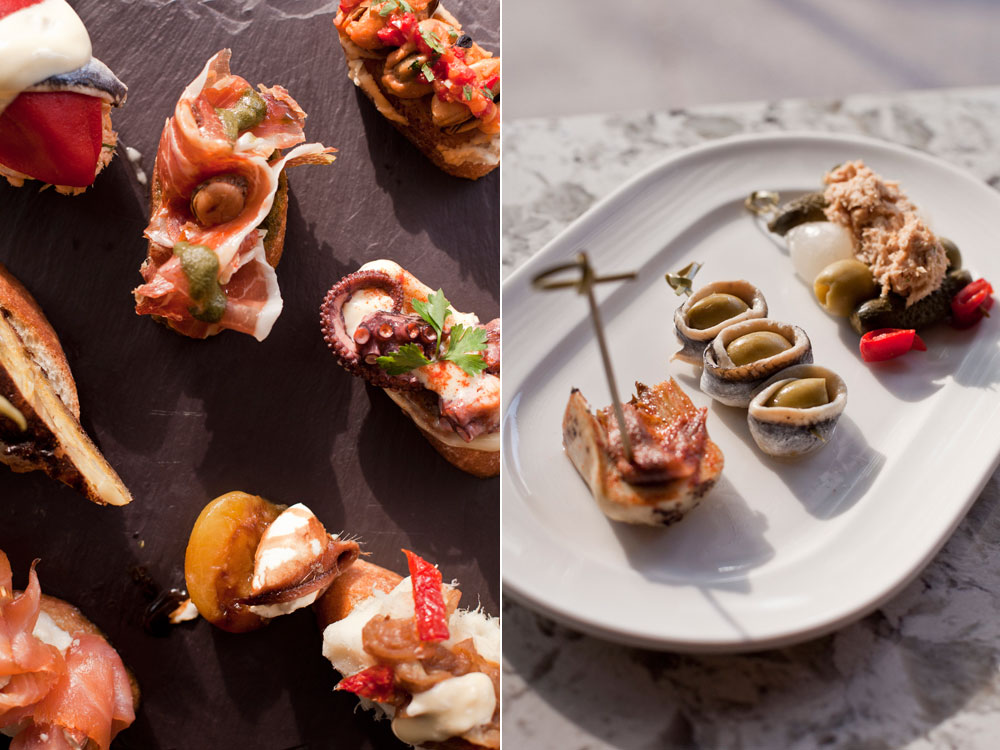 You can also discover culinary nirvana in the Pates section, which means in one instance a glass crock of whipped artichoke dip flooded with olive oil and served with a small flock of toasts. Another high point are the weird-ass sandwiches made with a pair of tortilla wedges, one example with a filling of creamed leeks and spinach constituting the menu's biggest feed. You also can't go wrong with the charcuterie assortment called plato de carne y queso ($20). A friend who's spent time in San Sebastian noted that the tapas bars there whet your hunger with trays displaying snacks stacked on every available surface. While our own health department prohibits this sort of sumptuous display, the bar at Donostia features several selections on cake-display platters under glass. You could do worse than ignore the confusing bill of fare entirely and adopt a point-and-eat strategy.

Ultimately, the menu at Donostia is more about the booze. That part of the menu is a didactic document with voluminous special sections for red and white wines, ciders, beers, sangrias, and sherries (wonderful fortified wines that run from bone-dry to raisin sweet). Sampling the full range of beverages at Donostia could take a lifetime. My advice: Get started! 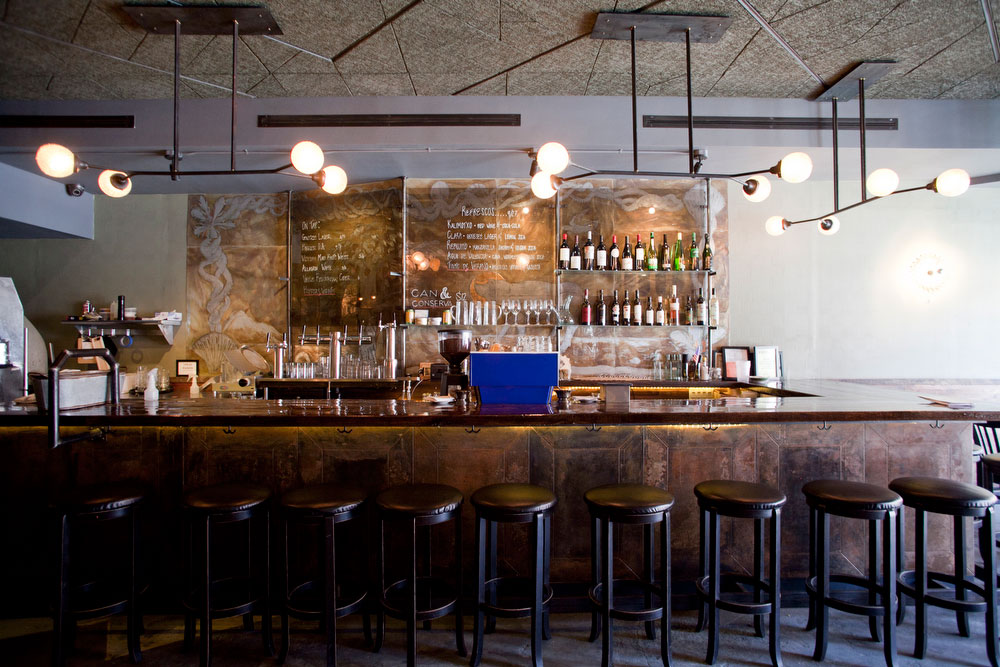 To misquote an adage, "Good things sometimes come in twos," and that is true of Basque tapas bars in the East Village. Not long after Donostia opened, an olive's throw away on First Avenue a place called Huertas ("Orchards") appeared, also claiming to be a Basque tapas bar. The interior makes artful use of dark woods and antique mirrors using bare brick as a backdrop. Huertas attracted lots of attention by its method of addressing the visual display problem by creating something called "passed tapas," whereby pintxos would be placed on trays and carried through the barroom ($2 to $4). These were available in addition to medium-size dishes called raciones, which could be ordered from the kitchen.

Huertas has a beautiful gilda, too, with a little more emphasis on the anchovy, and individual mussels escabeche awash in white vinegar and chopped aromatics. The only dud here was the spongy hake croquette resting in a puddle of indifferent garlic mayo. There tend to be eight passed tapas listed on the chalkboards, and an additional 10 raciones, plus charcuterie and cheese, making the menu in the front room much easier to digest than Donostia's. As an added boon, some of the sea creatures featured are fresh and imported from Spain. Foremost in strangeness are percebes, gooseneck barnacles that look like a baby alien that has just gnawed its way through your stomach. The flesh squeezed from its neck is sweet, but the price of four or five small specimens priced at $13 is too steep. The best dish among the raciones is something called migas, featuring tidbits of duck and croutons tossed in a verdant green sauce, with fresh pea shoots on top. Brilliant! Fresh is not a dirty word at Huertas, as it is at Donostia. 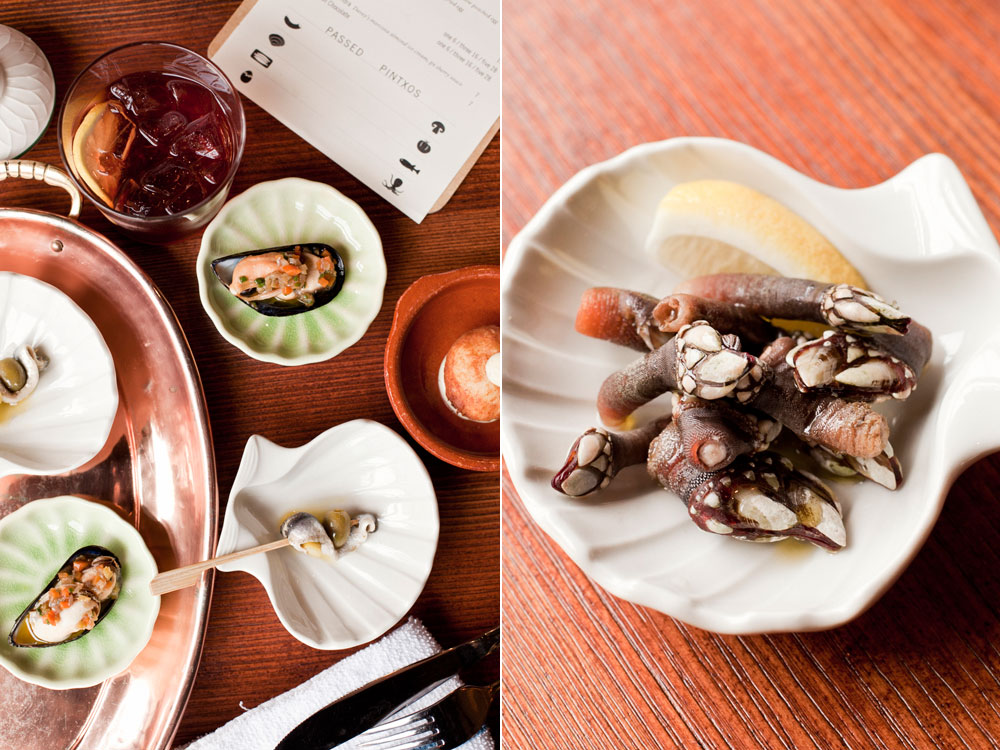 The list of Spanish alcohol is much shorter at Huertas; nevertheless, there is good cider, sherry, and vermouth (the latter on tap), and the barman is well versed in the selections available. Then there's the back room, which is reserved for a single prix-fixe meal ($52) in the faddish modern style, which flies in the face of the tapas tradition, though it serves as a reminder you're in the East Village rather than San Sebastian — as if you'd forgotten. 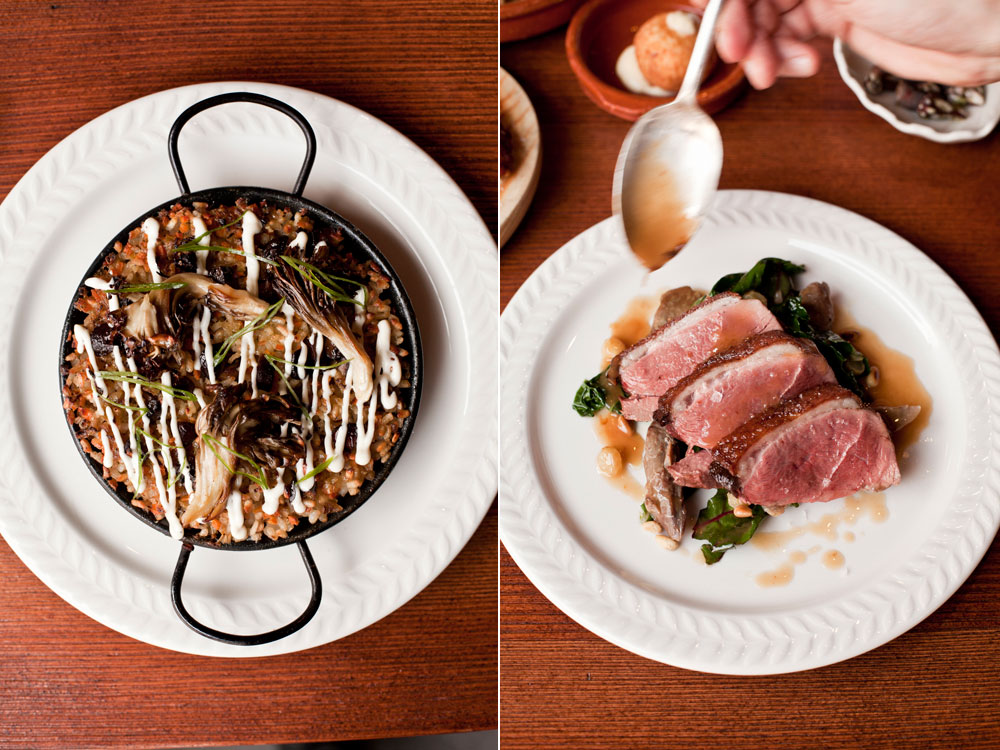 Lucky for us, the four-course feed via chef Jonah Miller verges on the superb. It begins with radishes served with whipped parsley butter as a prelude, then progresses to the first course: three small pintxos, including, on this occasion, a gilda, a toast with an agreeable puddle of foie gras, and a single mussel escabeche served in a soup spoon. The second course is a variation on the duck and pea-shoot migas of the raciones menu. So far, the meal has been a triumph, but it threatens to run off the rails with the third and largest course, which is not quite big enough to qualify as an entrée. This is the first course offering a selection of three, and my dining companion and I enjoyed a sliced duck breast with greens and golden raisins in a broth that threatened to be sweet, but wasn't. Less satisfactory was a grease-sodden vegetarian rice dish featuring pickled mushrooms squiggled with mayo, presented in a miniature paellera, suggesting once again that tapas bars shouldn't meddle in main dishes. The final course was a return to fine form, with three choices, from which we picked a pair of small cakes draped with pickled rhubarb and a cheese plate offering three bang-up selections with membrillo and a dab of honey.

Taken as a pair, Donostia and Huertas give a good idea of what dining in San Sebastian might be like, without jacking up your frequent flyer miles. Thus, your best bet is to graze at both places in succession, which I did one evening with a promenade around the park in between. Then went home and cracked open a book about the Spanish Civil War.

Our review of Donostia

Cost
Four pintxos with a charcuterie platter, with two glasses of wine and two of sherry shared by two people, $70 plus tip
Sample dishes
The sandwich made with two wedges of tortilla (like a potato omelet) called tortillas de doble capa, the banderillas gilda and chorizo picante, brandada (salt cod) or alcachofa (artichoke) pate.
What to drink
The alcohol menu is humongous, so bring your smart phone and Google freely; try a glass of the austere and brittle Basque white wine called txakoli, the sweet sherry called oloroso, or one of the Basque ciders.
Bonus tip
Don't try to eat dinner here; have some snacks and glasses of wine, beer, cider, or sherry, then go eat a pizza at Stromboli, or, better yet, go over Huertas and have some raciones.

Our review of Huertas

Cost
Prix fixe menu in the back room, $52 or $80 with beverage pairings. Two pintxos, two raciones, two wine cocktails called refrescos and two glasses of on-tap vermouth, $75 for two, pre-tip.
Sample dishes
Don't miss the migas of the day (a nicely sauced toss of croutons and meat topped with a poached egg), the octopus or gooseneck barnacles imported fresh from Spain, the foie gras toasts, or the pintxo called gilda.
What to drink
rebujito, a cocktail of manzanilla sherry and ginger soda; vermouth on tap; Itsasmendi "No. 7," a Basque white blend by the bottle; El Maestro fino, a very dry sherry.
Bonus tip
The four-course menu in the back room is certainly worth experiencing, but it defeats the purpose of a tapas bar, and most of the dishes are available piecemeal in the front room.