Share All sharing options for: At Union Square's Cevich, the Fast-Fooding of Ceviche

Has the range of possible gimmicks for fast-food restaurants been exhausted yet? Apparently not, because Union Square now hosts the first example of a would-be chain specializing exclusively in…ceviche! As if to telegraph its streamlined grab-and-go nature, co-owners Reina Laws and Lindsay Goldstein have named the place Cevich, leaving off the last "e" from a term that designates a cold seafood soup or salad common to Peru, Ecuador, and Mexico, in which raw seafood is "cooked" in citrus juice. Well, it's not really cooked, because heat is not applied and the fruit juice doesn't kill whatever bacteria may be on or in the fish, though the soakage renders the flesh opaque. Therefore, as with sushi and fish carpaccio, hygiene, freshness, and certainty about sources is paramount when it comes to where one consumes ceviche. 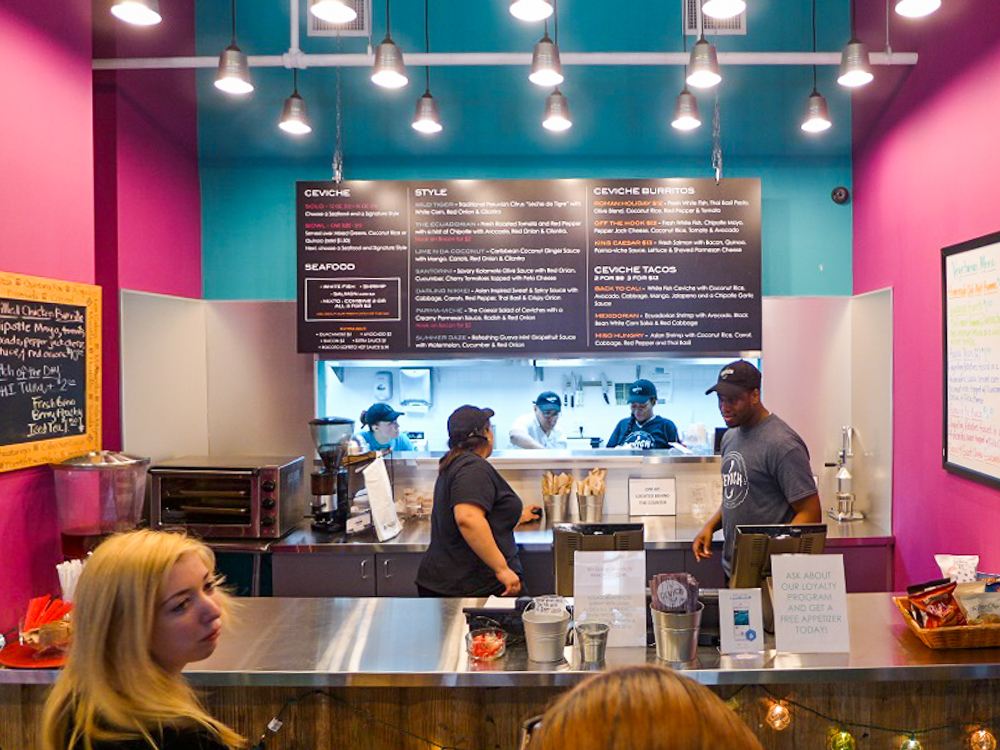 Located on East 15th Street, Cevich has that concrete bunker look often cultivated by modern fast-food spots, as if intentionally utilitarian and none too comfortable. One is permitted to perch and eat at one of the small number of stools and chairs, but not relax. Also in common with today's fast food joints featuring newfangled offerings, the menu is bewildering, offering choices you'd maybe rather not make. Ceviche is assembled in seven "signature styles," some relatively authentic, others invented out of whole cloth. These styles are available in two sizes, 12 ounce ($12) and 16 ounce ($14) — Why so little difference between sizes? Each serving allows you to select one out of the three types of seafood (shrimp, salmon, and tilapia — which technically isn't seafood, since it's farmed in fresh water). Confused yet? For some reason, salmon is $2 more expensive, and so is a combination of all three types in one serving. Plus there's a roster of add-ins, most priced at $2, including guacamole, avocado, extra sauce, and bacon. Bacon in ceviche? I'm throwing up a little in my mouth. 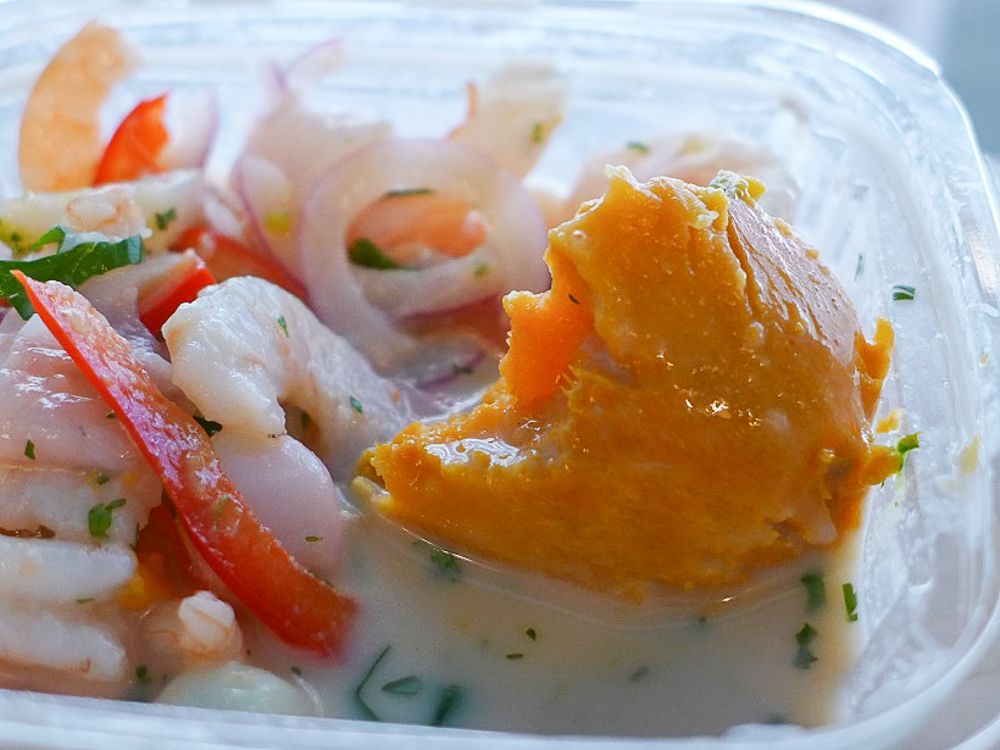 The invented styles include one that resembles Caesar salad and another that contains guava, mint, grapefruit, watermelon, cucumber, and red onion, making ceviche into a wacky fruit salad. Instead I went for a couple of main-stream ones. Wild tiger is a fair approximation of Peruvian leche de tigre, a reputed aphrodisiac, but only if you drink the milky fluid after the solid parts are consumed. I got the mixed seafood option and the smaller size, which came nicely flavored with cilantro but had big hunks of orange yam in it that seemed like filler. The salmon, shrimp, and tilapia tasted fresh, and I asked one of the owners which, if any, of the seafood selections had been cooked with heat before being turned into ceviche. "We poach the shrimp very briefly, just a few seconds, but everything else is raw," was her reply. She went on, "In the future, we hope to have additional things like octopus and sea bass." 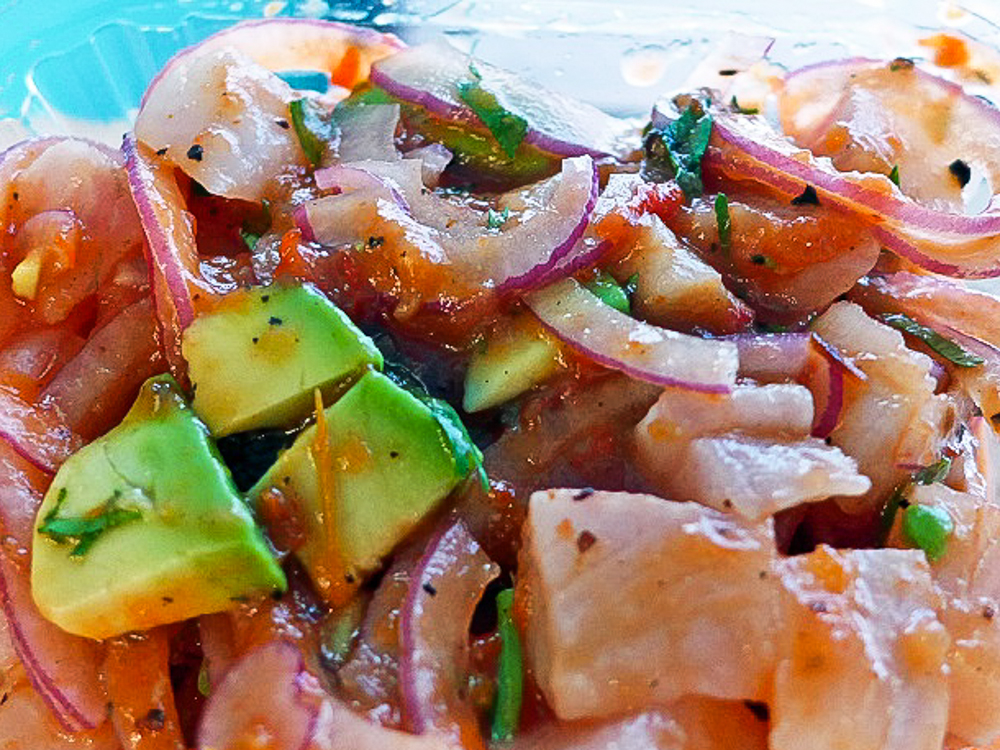 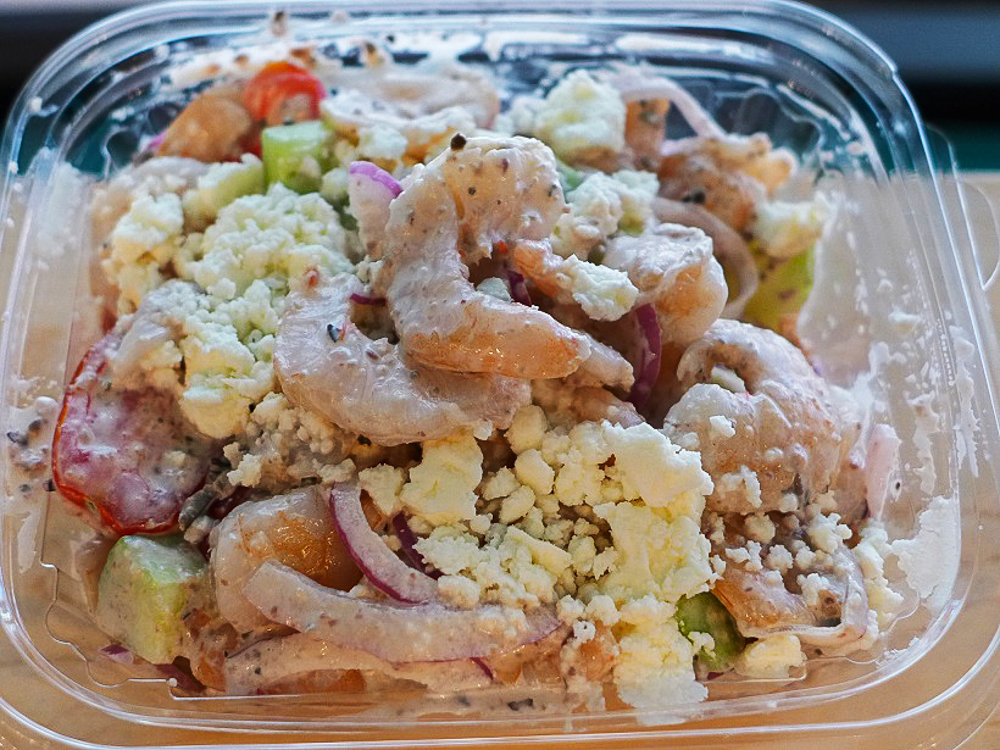 Like the wild tiger ceviche, the choice called "the Ecuadorian" came in a clear plastic tub, and also featured cilantro, but with roasted tomato sauce and a small amount of chipotle added. Chipotle instead of ahi, the national pepper of Ecuador? Well, yes. The tilapia that I picked tasted fine, and this ceviche came authentically furnished with free cancha (corn nuts) and popcorn, to be tossed in at your discretion. This particular ceviche was pleasantly zesty, though I don't think that, at $12, it would quite make a full meal. My favorite ceviche was one of the invented ones. The Santorini featured the ungainly combo of Kalamata olives, red onions, and feta cheese tossed with shrimp. It tasted Greek, but seemed more like salad than ceviche. 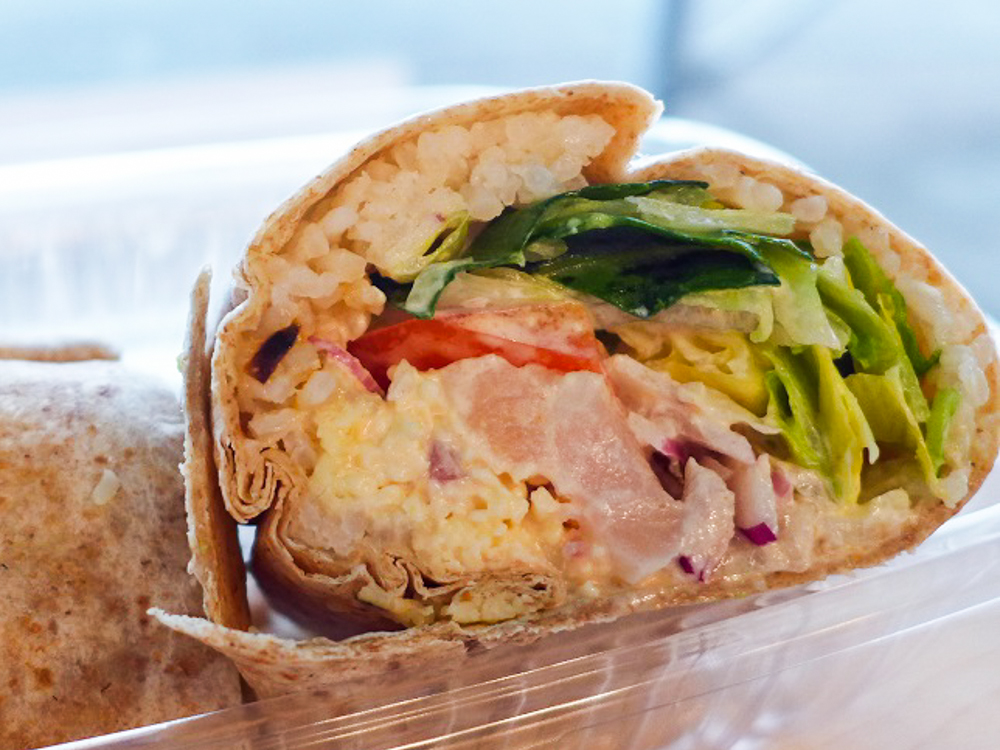 ["Off the hook" ceviche burrito] 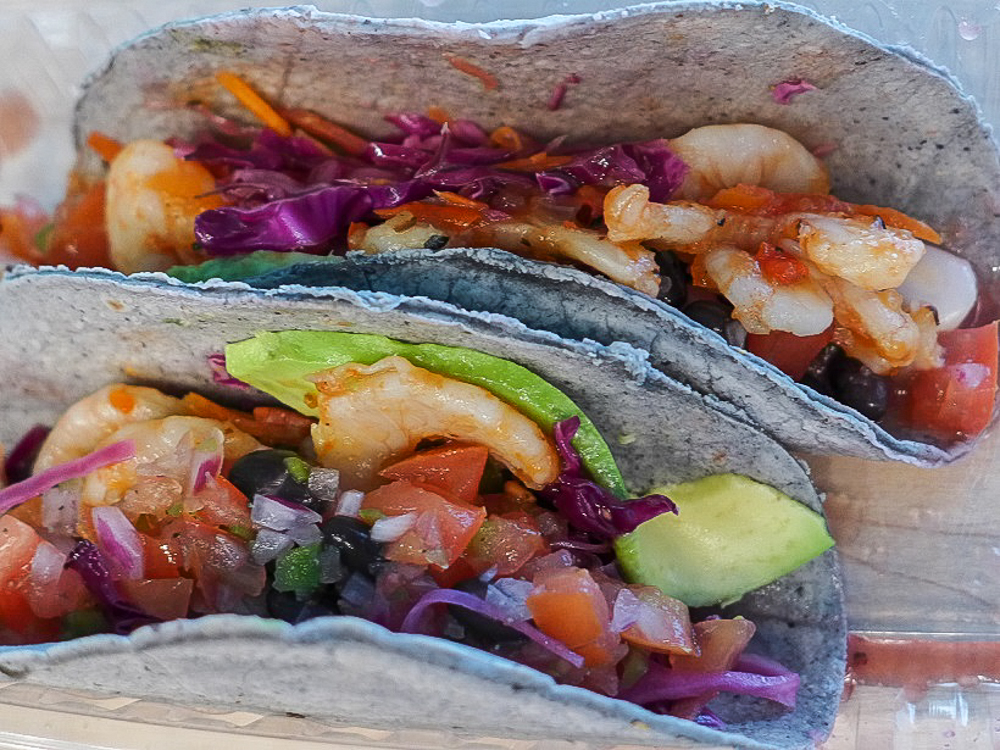 While the three ceviches I tried were fresh and wholesome, inevitably the menu is filled out with absurdities aimed at those who really aren't that interested in eating ceviche. There are three ceviche burritos, for example. The one called "off the hook" ($12) featured raw tilapia, pepper jack cheese, chipotle mayo, avocado, lettuce, tomato, and — sending the thing in an Indonesian direction — coconut rice. Frankly weird but fairly tasty. It would have been just as good without the tilapia. Mexican cuisine comes in for further abuse in the ceviche tacos. Now, it is traditional to serve Mexican ceviche on tostadas, but the tacos called "Mexidorian" fill a pair of blue-corn tortillas with the Ecuadorian ceviche on the ceviche menu. The main flaw is that the tortillas have not been heated and thus rendered pliable, so they are brittle and raw tasting, making a crappy context for the ceviche.

Stick with the ceviches rather than the burritos or tacos and you won't have a bad meal — though I'm still not sure about eating ceviche in a fast-food place. It seems too much like eating sushi from a salad bar.