In each installment of Pastry Cases, sweets fanatics and lovers of (most) things baked Charlotte Druckman and Gabriella Gershenson (of Every Day with Rachael Ray) share a favorite confection, slice of cake, ice cream scoop, or other delectable delight worth the sugar high—and the trek. In this week's edition, the coquettes nibble authentic French pastry with piping hot tea at the venerable Bosie Tea Parlor in the West Village. 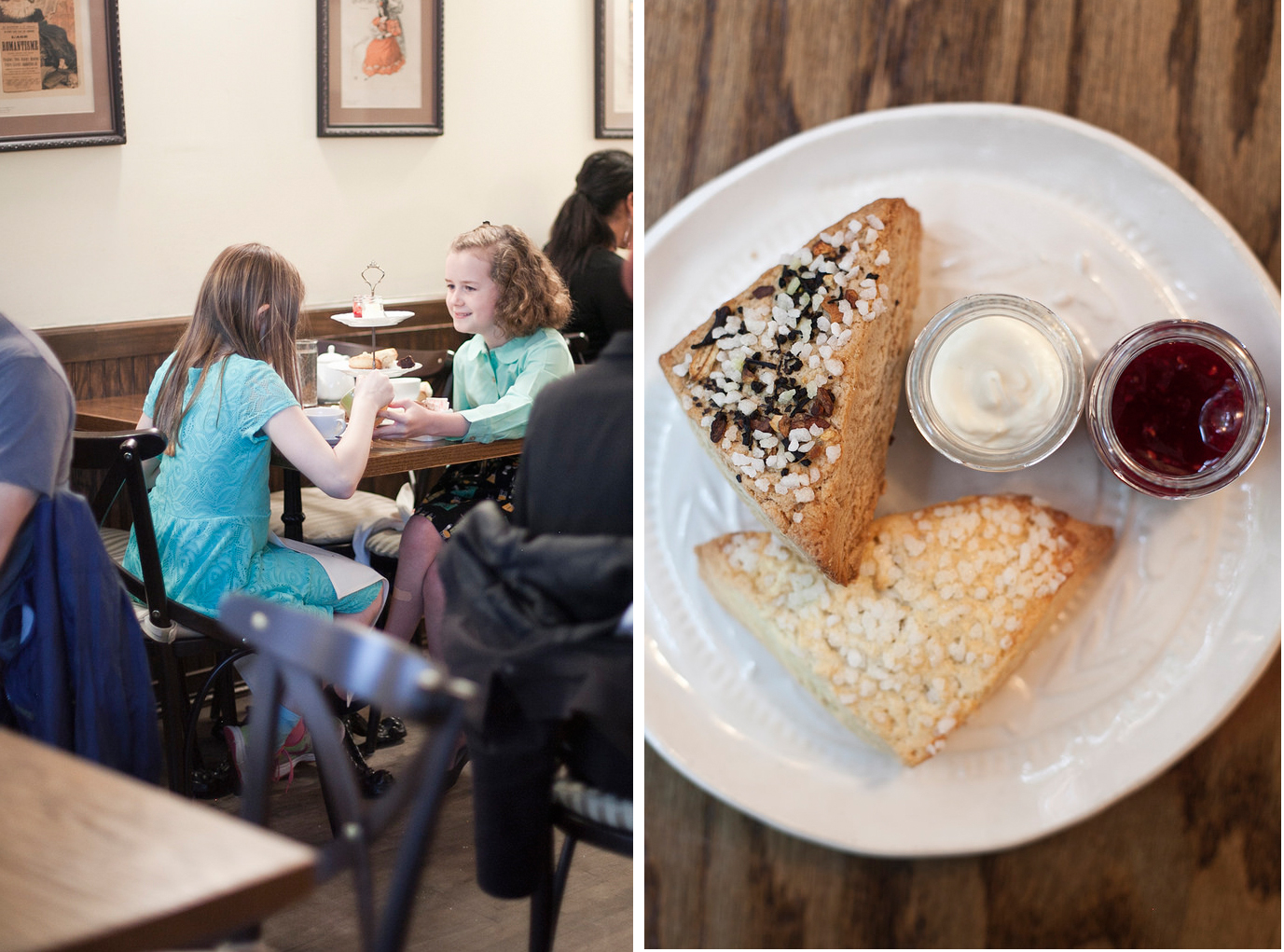 [It's a tea party! Clotted cream, jam and scones at Bosie Tea Parlor. All photos by Paul Crispin Quitoriano]

GG: You have to watch this before we start. I think excluding goats was a missed opportunity.

CD: Agreed about the goats. Now, what did you think of Bosie Tea Parlor?

GG: You brought me to a little oasis in the West Village, Charlotte. I was so impressed. I had no idea it was there, and no idea there was such pedigreed talent behind it. Clearly, I've been living under a fucking rock.

CD: I do not dick around when it comes to butter and French pastry, Gabriella.

GG: Good Lord, it was good. And the matcha latte was pretty bangin' too

CD: Oh yes, I have ushered you into the ways of the matcha latte.

GG: But back to French pastry, the guy who makes it there, Damien Herrgott…

CD: It's practically in his DNA; he is a third generation pâtissier.

GG: When and how did you find him?

CD: He is French and comes from Franche-Comté, the area of France that lies in between Alsace and the Alps. I found him there and carried him back on a palanquin. Just kidding. I found him when Bosie opened, three years ago. It's the retail storefront for a company called l'Âge de Thé that imports and blends all sorts of teas. I noticed there was some fine-looking pastry on the premises. Damien, I was told, was a Pierre Hermé protégé. So I decided I should maybe try some of the sweets. That's how it started, my addiction. 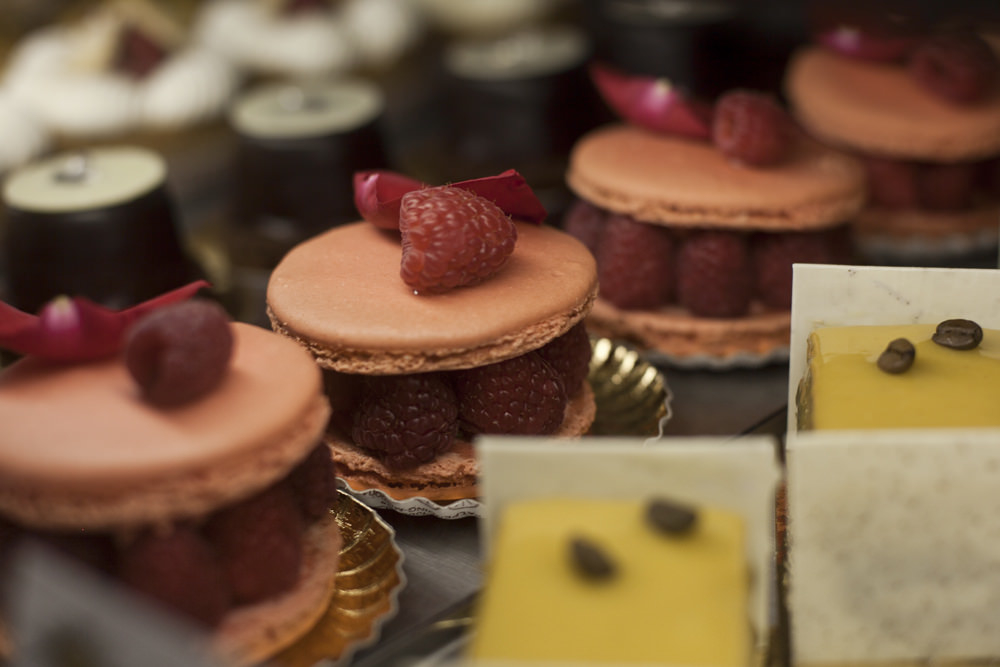 [The Ispahan pastry, a raspberry macaron with lychee and rose cream.]

GG: We had the benefit of chatting with Damien while we ate. Some of his creations are recognizable from his days at Pierre Hermé and Ladurée. We have bona fide pastry nobility in our midst. Did you recognize things like the Ispahan right off the bat? When I saw that on the menu I definitely perked up.

CD: The macarons. I noticed he had a few flavors—salted caramel, jasmine, milk chocolate-passion fruit (eek)—that made me think of Hermé. I tried a few to get a read on things. Then I branched out. The best day was the one where the canelés turned up. People like to talk up the canelés at other places. And I humor them by smiling as though in agreement. Really, I'm smiling because I know they haven't a clue and my dream canelés are hidden away where they can't find them and steal them from me.

GG: You are a woman of breeding, and thank you for sharing them with me. But I'm afraid the cat's out of the bag. 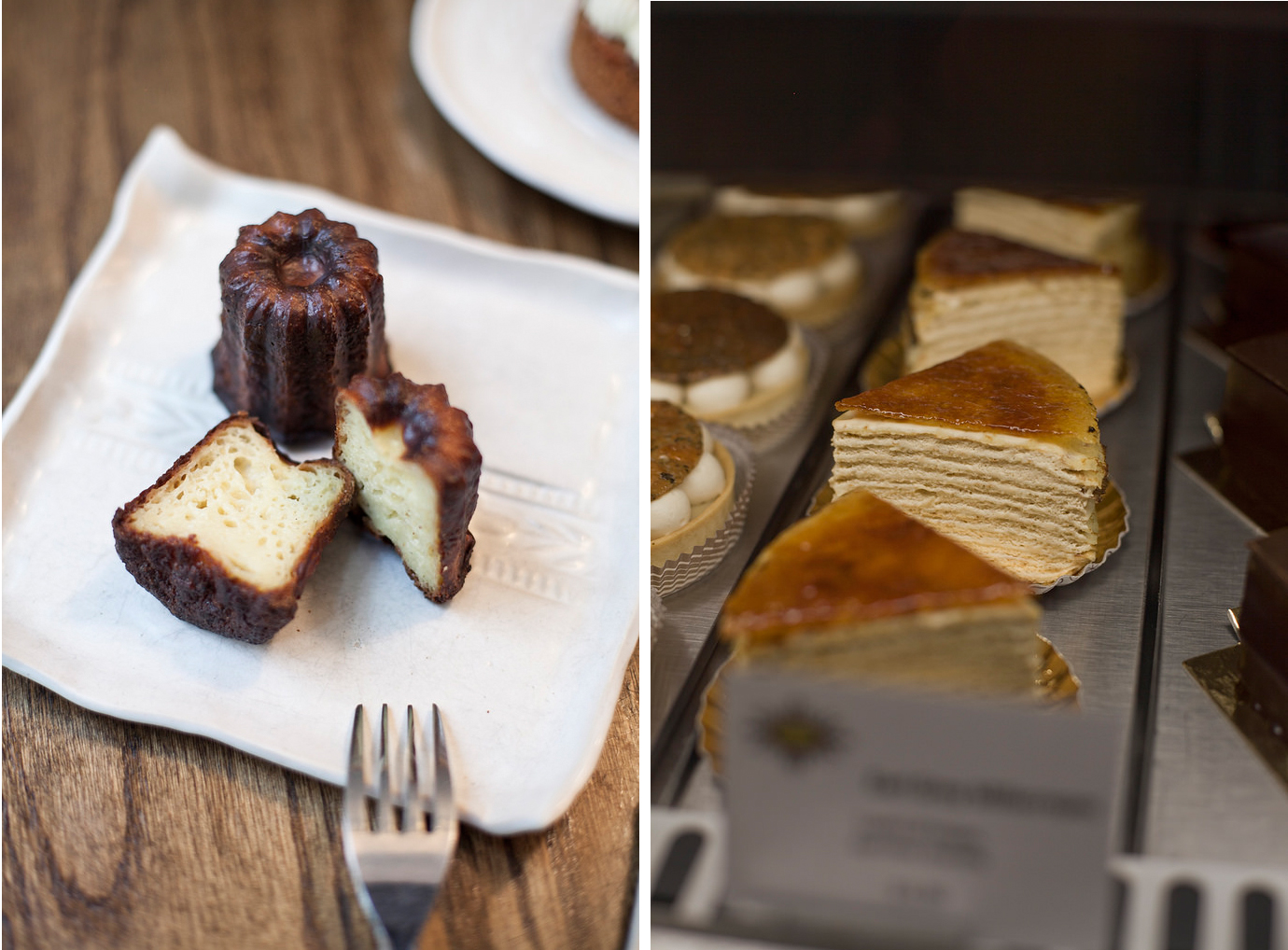 [The exemplary canelé and a slice of Earl Grey crêpe cake.]

CD: I would like to know what you thought of the canelé?

GG: It defied expectations. I didn't know what expectations to have until I had this one. It's a benchmark against which to measure all canelés. The soft custard on the inside, with that great caramelized crunch. Exquisite.

CD: The exteriors get almost shellacked, because of the beeswax used to line the molds, and the molds—

GG: So that, we agree, is the crown jewel of Bosie?

GG: I know you're very keen on their scones too.

CD: Because it is not really a scone. It's more like a biscuit.

GG: What's the difference between a scone and a biscuit? 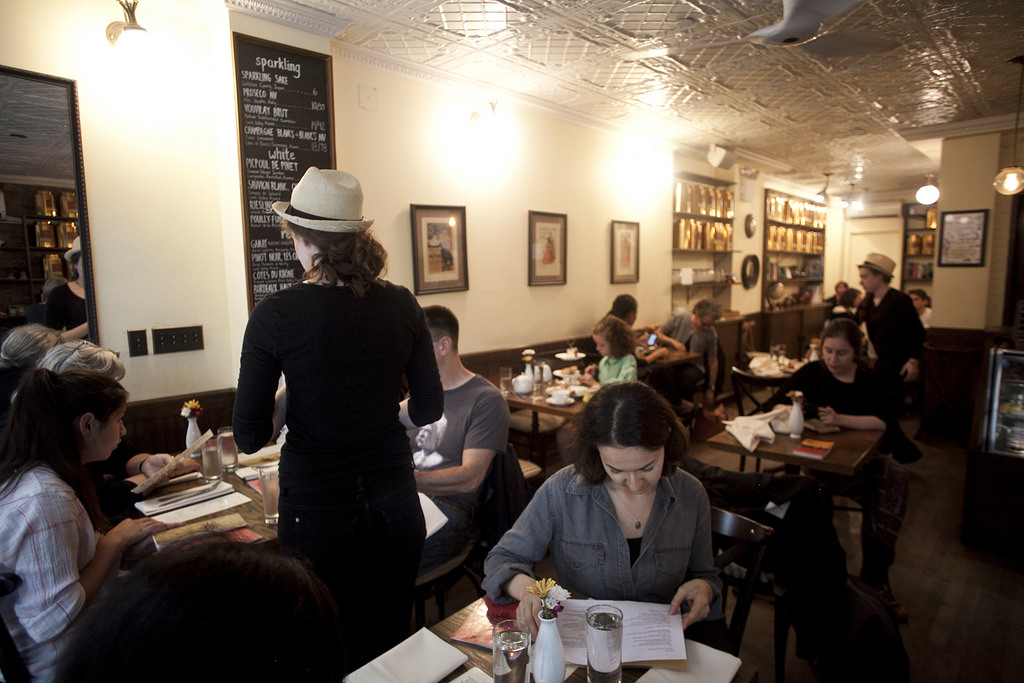 CD: You have to ask Julia Moskin this question. There are overlaps. I want her to try this Bosie scone. Damien was so forthcoming about everything but he clammed up about that scone. What I found so interesting was that he'd never really made a scone before, from scratch, and he did a lot of experimenting to develop his recipe.

GG: I would love to hear the finer points because to be honest, it was a good scone but it didn't strike me as revolutionary in any way. What feels different about it to you?

CD: Probably the fact that it's not a true scone. "Sweet biscuit" would be more accurate. He decided to start with an American biscuit and he uses cake flour. He also uses heavy cream as his only liquid, and then LOTS of butter. He will not say how much. The crumb is so much moister than your average scone's, and denser, too. Plus, there is that distinct sweetness that comes from CREAM—sweet, sweet dreamy cream, and butter. So there's not a lot of sugar, but you get this clean milky sweetness coming through. Actually, this is what you might imagine a French interpretation of a biscuit to be.

GG: Another I really enjoyed was the Earl Grey crêpe cake. I've never delved into the fussy charm of the crêpe cake but this one was a fine introduction. The crêpes were tender, the Earl Grey infused cream layers filled my mouth with fragrance, and that brûléed sugar topping, in a way, approximated the warmth of a hot cup of tea. Its toastiness really worked here. 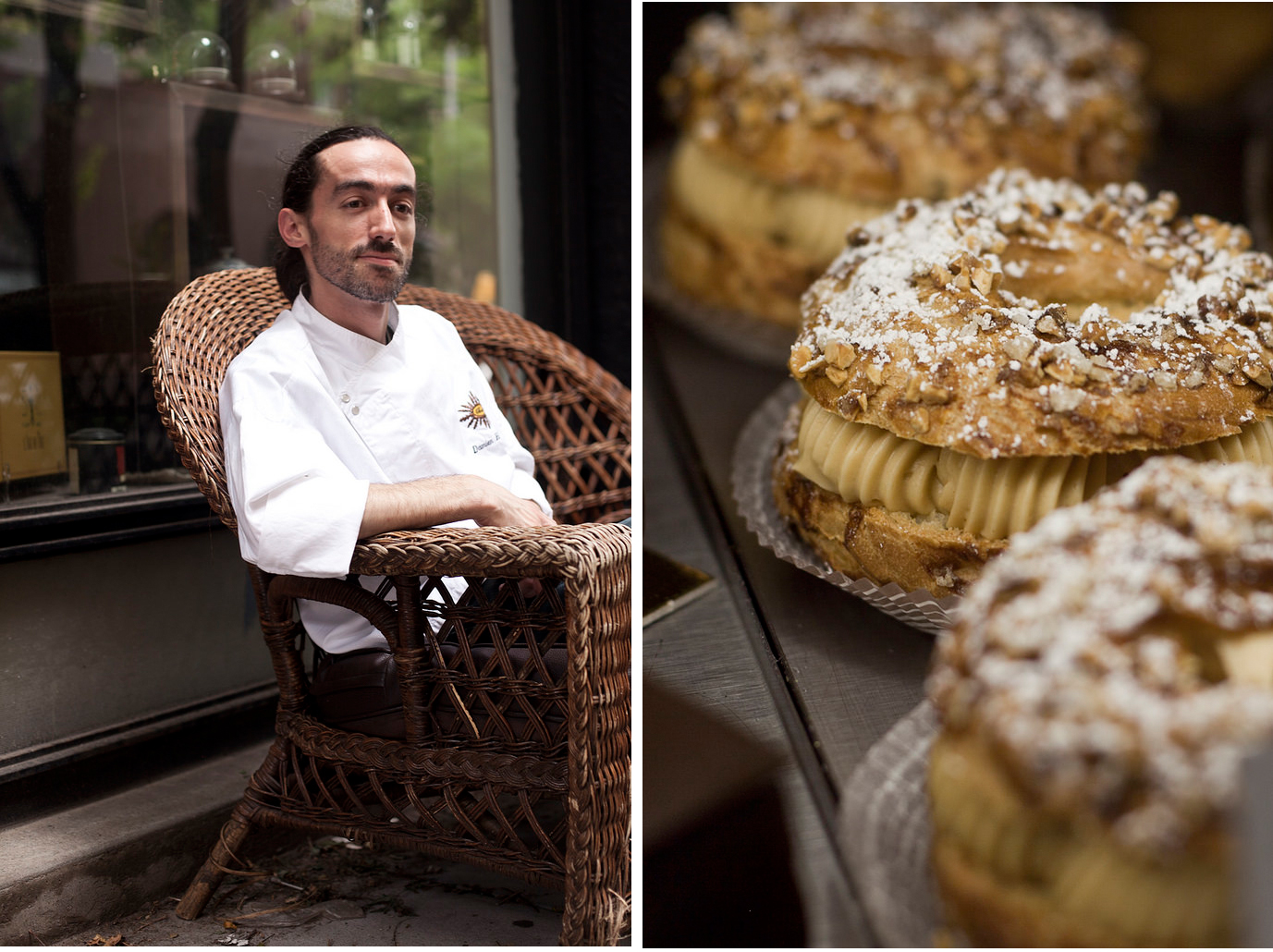 CD: Damien said that what he learned from Pierre Hermé and valued most is this idea that the pastry is always a vehicle for expressing flavor and texture. I think this crepe cake is such an excellent example of that. The tea flavor—that infusion in the cream—is so well calibrated, and then, too, the brûlée top for that surprising shattering crisp. And the crêpes were so light and not chewy or soggy.

GG: I really appreciate that he focuses on the classics as well as on more unusual signature items. I loved his lemon tart; it might be the best I've had in the city. A good lemon tart is something that you can find with regularity in places like Paris or Montreal, where patisseries abound. Here, not so much. This one had a tender pâte sucrée crust that just supported the lemon curd filling. The curd was soft and voluptuous, held its shape just enough, and was not overly tart or sweet—just soft and reassuringly citrusy. And then the toasted meringue topping harmonized with the rest. It's a whisper of a dessert in many ways and yet so satisfying. 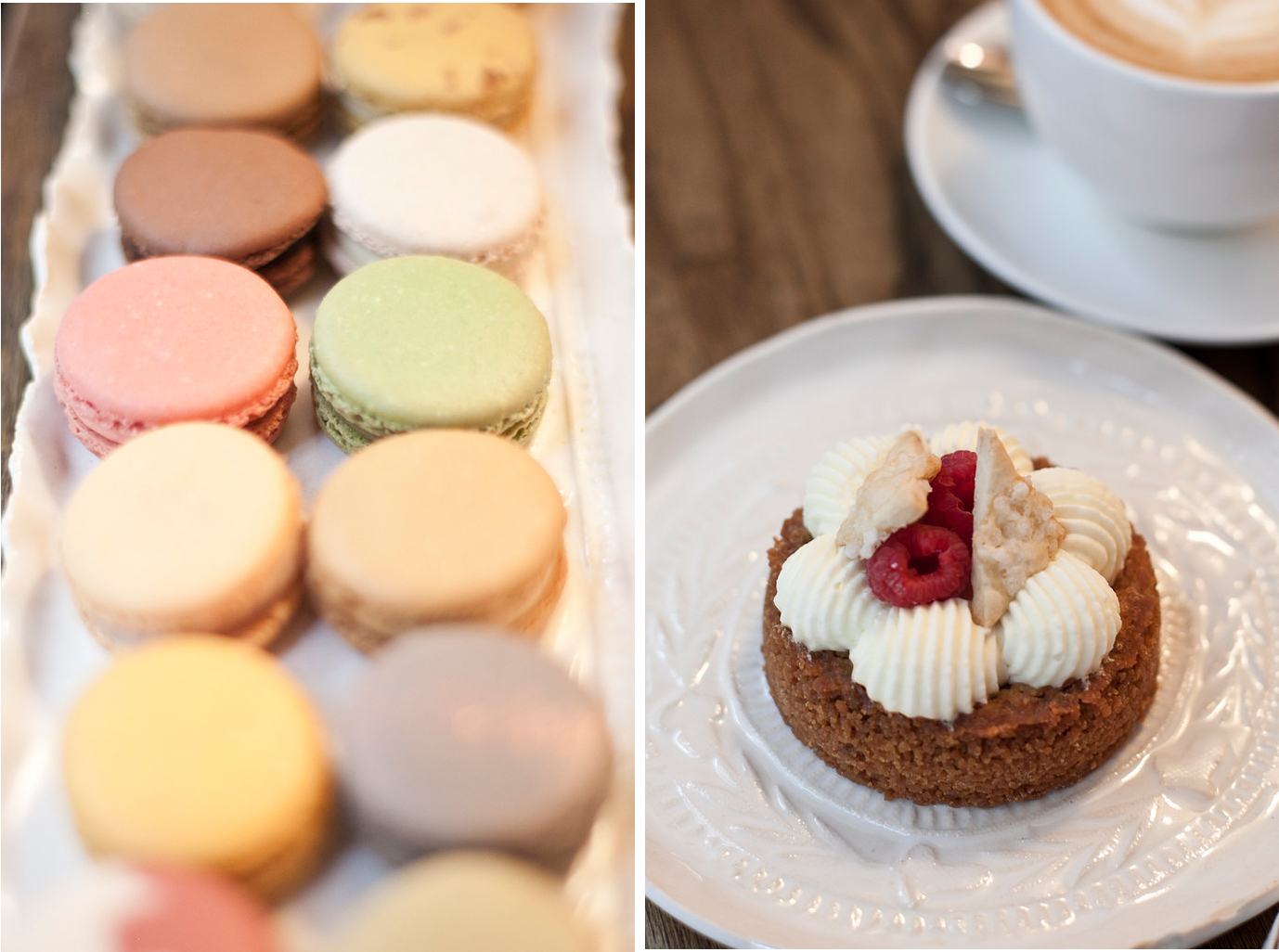 [A pastel palette of macarons and the Tea Time tart with a scone crumb crust and clafouti batter filling.]

CD: I did something a little naughty with the lemon tart, and I would do it again. I put a little bit of the raspberry jam that comes with the scone on my forkful of tart. So much for breeding.

GG: I looked the other way.

CD: It was really good. I'm confessing it here, because if there's anyone else out there with similar tendencies, I hope he or she takes a cue. I hope people take our cue in general and hit Bosie. In a few weeks a Harlem outpost will be opening on Second Avenue between 109th and 110th streets. The commissary kitchen will allow Damien to increase wholesale production and expand his viennoiseries selection.

GG: Meet me there when they open. I'll bring the jam.