Share All sharing options for: The Black-and-White Cookie's Curious History

No pastry — except perhaps the cheesecake — is more closely associated with New York City than the black-and-white cookie. This flattened dome of fine-textured cake, with a coating of chocolate and vanilla fondant bisected in the middle to keep the flavors apart, is really not a cookie, but a "drop cake," as William Grimes points out in a 1998 New York Times article. Many believe it was descended from a cookie popular for over a century in upstate New York called the "half moon." This baked good has a cookie-shaped base of chocolate cake (vanilla is a common variation) with a fluffy layer of actual frosting on top, with the same chocolate and vanilla demarcation as the black and white, but with a thicker layer of chocolate frosting. Wikipedia and other suspect sources contend it was invented in Utica by Hemstrought's Bakery early in the 20th century, but the archaic form of the cookie and the iconography suggest the half moon is much older.

The word "cookie" itself comes from the Dutch word "koekje," which is pronounced nearly the same as its English equivalent. It simply means "little cake," suggesting that early cookies brought to this country by Dutch settlers in the 17th and 18th centuries were often just miniature cakes. Other cookie examples that date from that time include gingerbread men and macaroons, neither of which conform to the idea of the modern cookie. Thus our own black and white, rather than being inspired by something from Utica, may date to the city's own colonial days, when this type of cake-cookie was sold to shoppers as a pick-me-up in baked-good stalls of open-air markets.

The transformation of the cake-cookie by the application of fondant rather than frosting simply makes it more modern and streamlined, and capable of being broadly distributed without smearing the frosting. Yet the image of the half moon remains — a medieval symbol representing the midpoint of the lunar cycle — as a modern reminder of New York City's remote northern-European past. The moon also symbolizes Diana and the Virgin Mary, both paragons of sexual purity. Never give the black-and-white cookie to another person hoping to get laid! 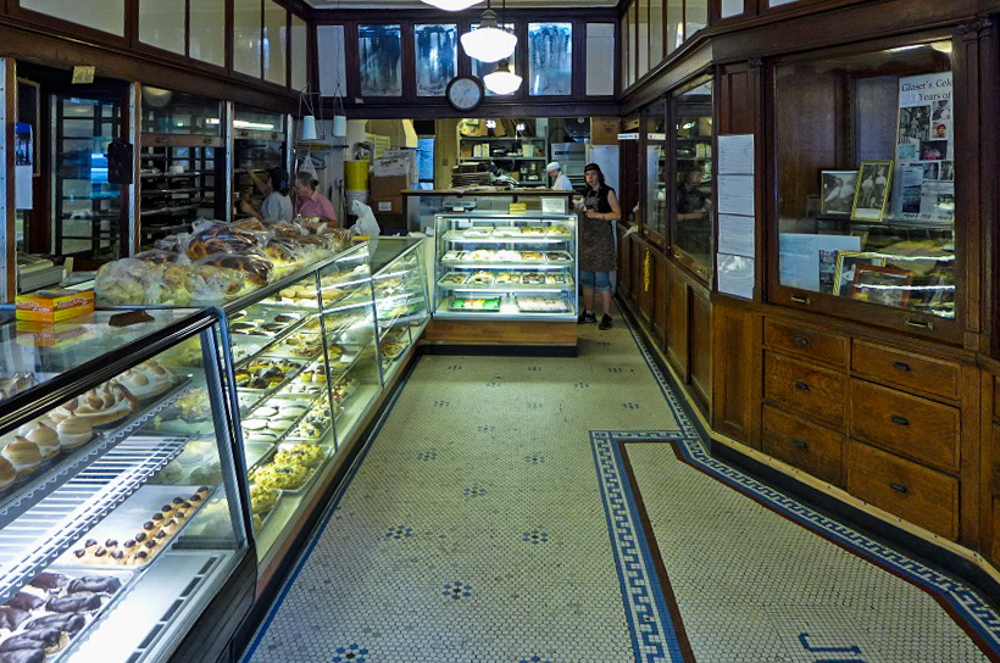 [The inside of Glaser's Bake Shop]

Also countering the idea that Utica's half moon inspired our own black and white is the example found at Glaser's Bake Shop in Manhattan's Yorkville neighborhood, also mentioned in the Grimes piece. The black-and-white cookie was apparently among the original recipes that Bavarian immigrants John and Justine Glaser used when they opened the bakery in 1902, according to grandson Herb Glaser, making their black and white at least as old as Hemstrought's half moon. 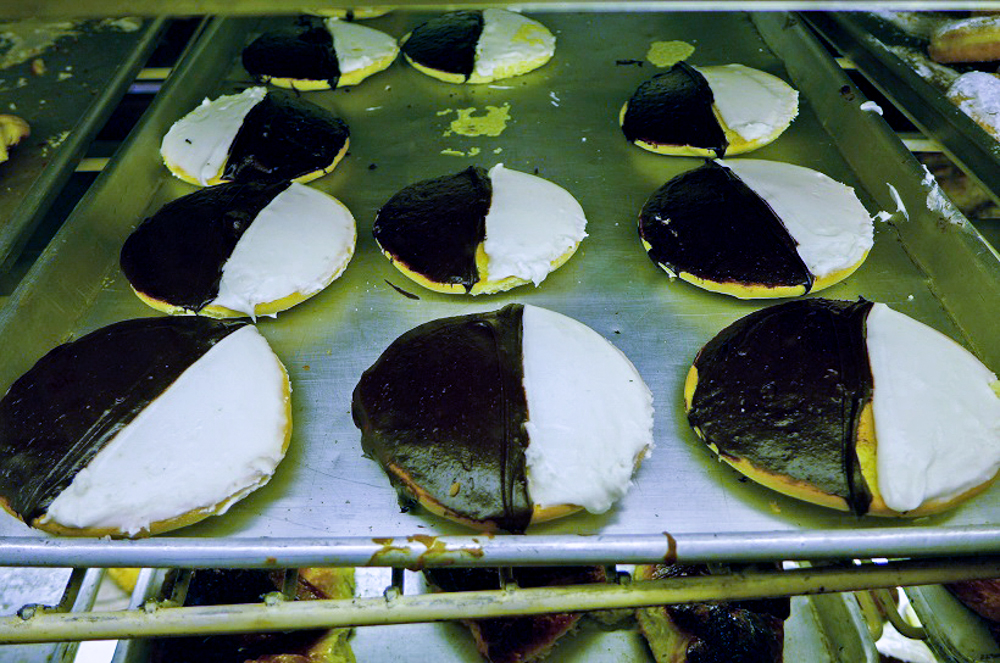 But the moon symbolology of both cookies was blown out of the water by Seinfeld in a 1994 episode entitled "The Dinner Party." Set in a bakery, it shows Jerry remaking the pastry as an anti-racist icon: "Look, Elaine, the black-and-white cookie. I love the black and white — two races of flavor living side by side in harmony," remotely echoing the Stevie Wonder and Paul McCartney duet, "Ebony and Ivory." Jerry later instructs her how to properly eat one: "See, the key to eating the black-and-white cookie, Elaine, is that you want to get some black and some white in each bite…yet somehow racial harmony eludes us. If people would only look to the cookie, all our problems would be solved!"

Inspired by re-watching the Seinfeld episode, I decided to check on the cookie's current state 20 years later. These days, black and whites remain widely available in bakeries, bagelries, and bodegas in many parts of town, averaging four inches in diameter and retailing at around $3 each. But many have been oddly transformed. Here are my tasting notes, listing the sources in alphabetical order. 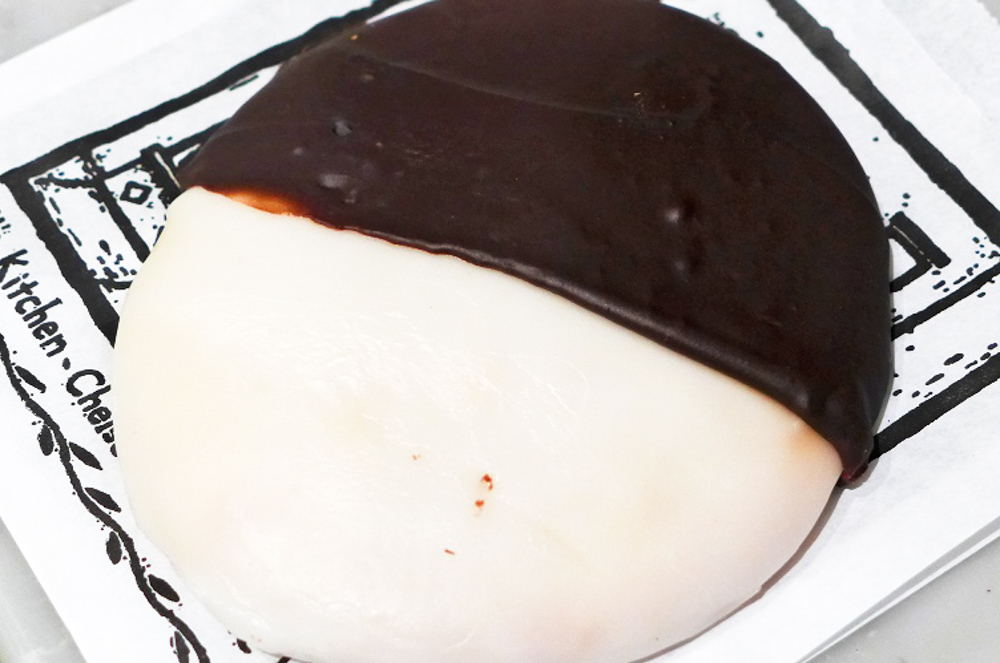 Amy's Bakery — The black-and-white cookies at the Chelsea Market branch are notably fresh and more cake-like than average. As with most bakery versions (see Glaser's, below), the frostings tend to be fluffier than the fondants found on the cookies not sold in bakeries. Chelsea Market, 75 9th Ave, 212-462-4338. 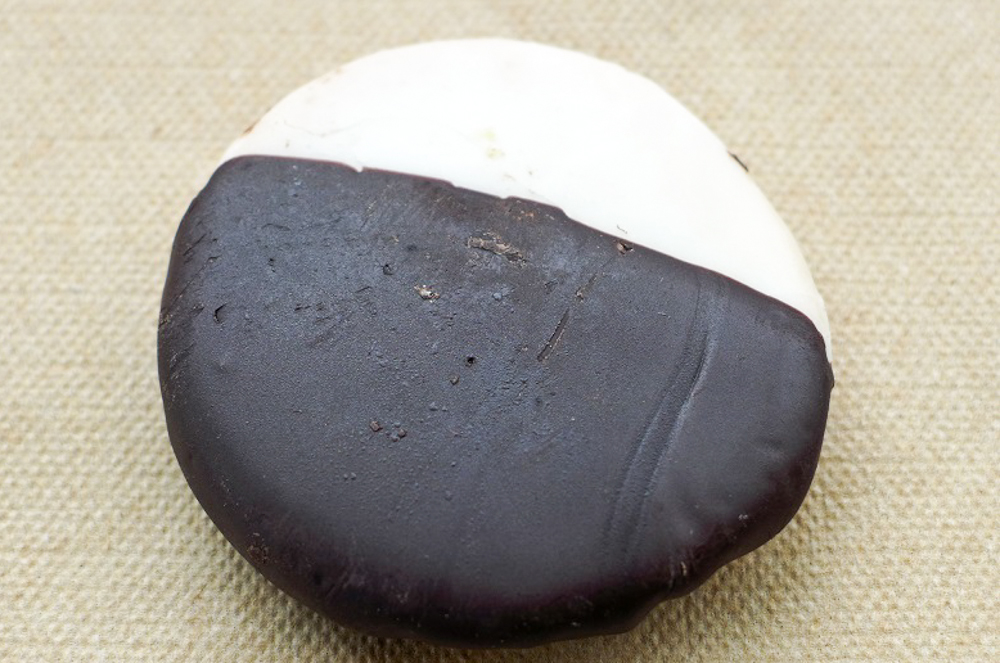 Bagelsmith — Interesting that one of the most popular bastions of the black and white seems to be bagel bakeries, though the cookies are usually not made on the premises. Williamsburg's Bagelsmith sells miniature versions, a scant two inches in diameter, for 55 cents each. 566 Lorimer St, Brooklyn, 347-294-0046. 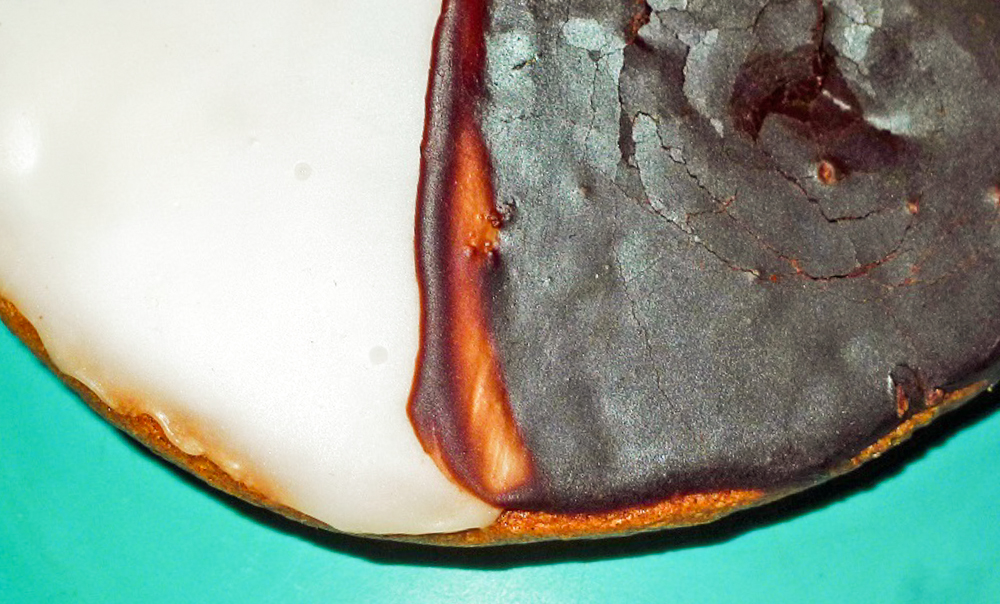 Chelsea Deli & Bakery — The adamantine fondant school of black and whites is here demonstrated by this corner deli specializing in oversweet baked goods. The cake is unexpectedly moist and flavorful, and not as stale as you might expect. 254 8th Ave, 212-243-8444 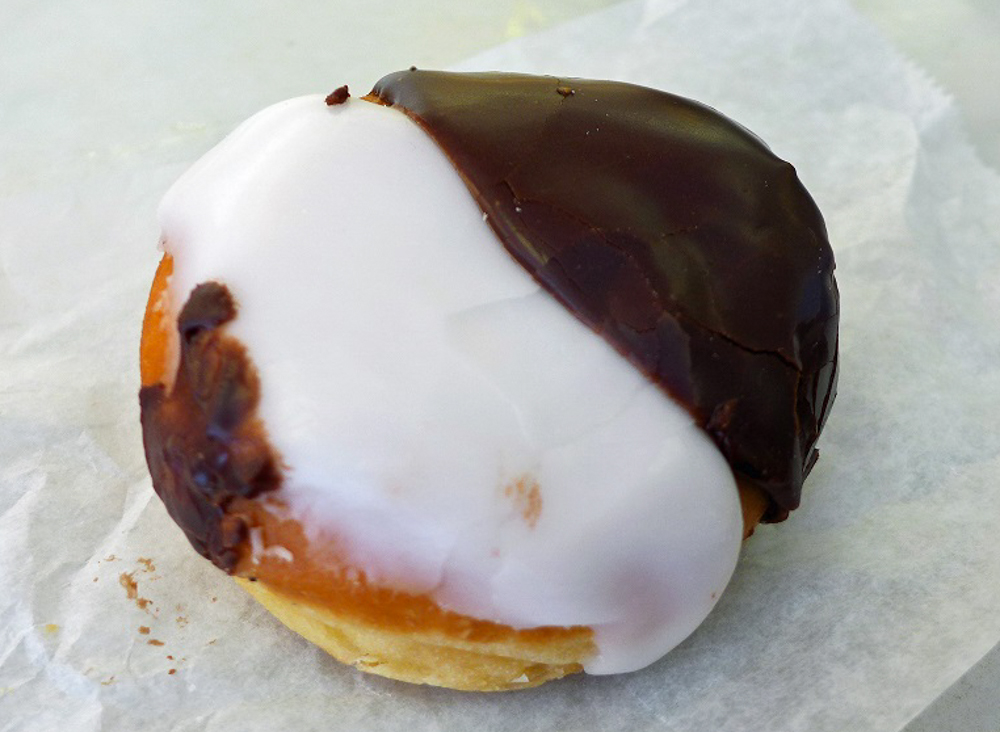 Donut Pub —Though most cookies sold in independent donut shops (notably, Dunkin' Donuts doesn't have one) are trucked in, Chelsea's Donut Pub insists on making its own. Not really a cookie, the result is a flattish, custard-filled donut. 203 W 14th St, 212-929-0126. 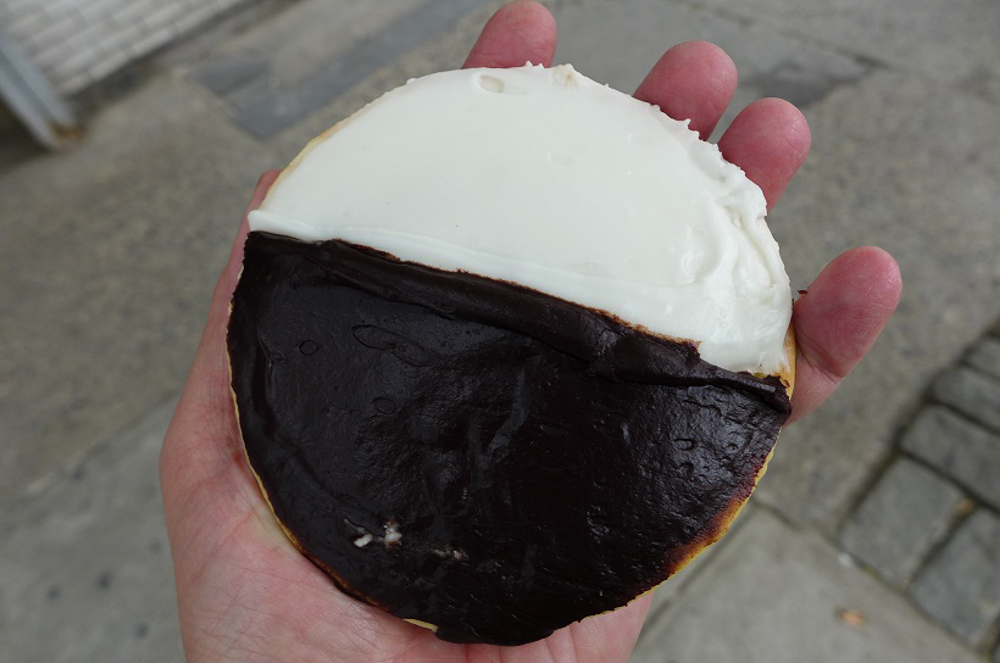 Glaser's Bake Shop — The version here — which is closer to Utica's half moon than we may care to acknowledge – is coated with very fluffy frosting, and the chocolate is more profuse than the vanilla. The cake is plain, suggesting that the frosting is the cookie's raison d'être. And the result ($2.25) is very, very good. 1670 1st Ave, 212-289-2562. 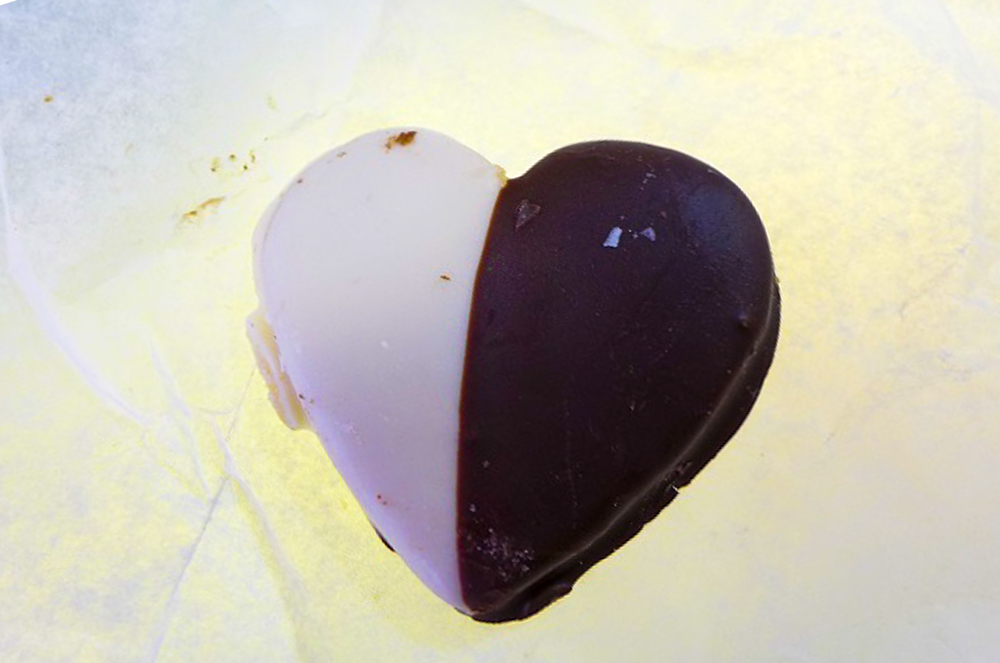 Le Gourmet — This carryout and catering concern, like Bagelsmith, makes a miniature black and white, in this case shaped like a heart. The pastry is more sugar cookie than cake, topped with a very firm fondant. Does it still qualify as a black-and-white cookie if it's not round? 1267 1st Ave, 212-772-8811. 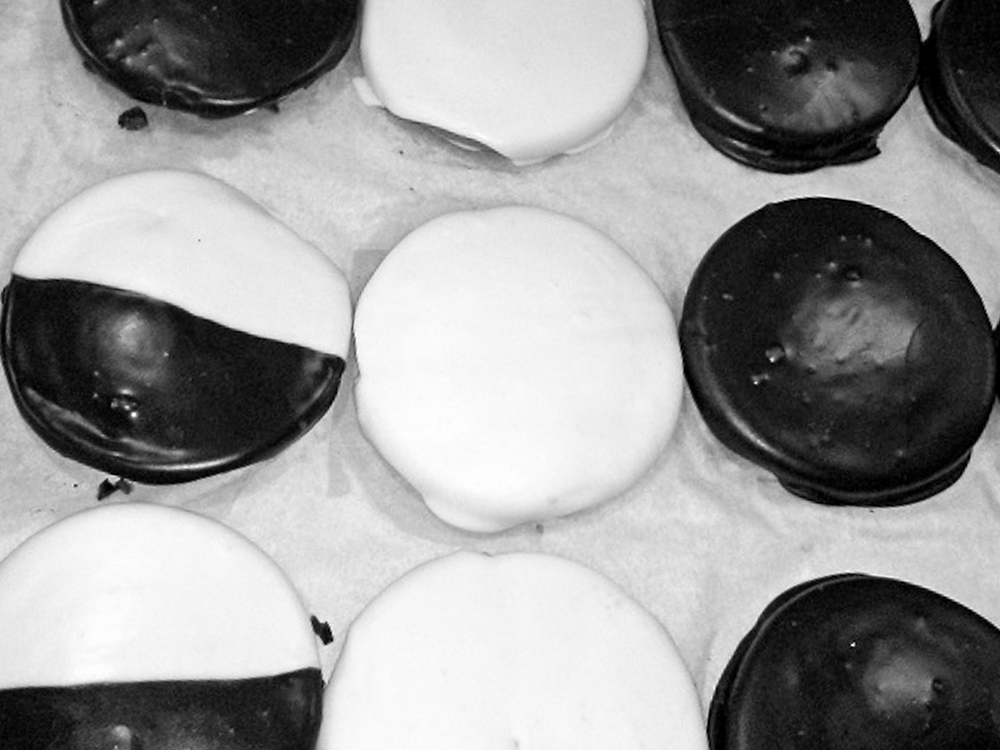 Pick A Bagel — At this Battery Park institution, open 24 hours, not only are decent black and whites available, but you can also get the same cake base topped exclusively with either chocolate or vanilla fondant. Are those versions racist by their very nature? 102 North End Ave #1, 212-786-9200. 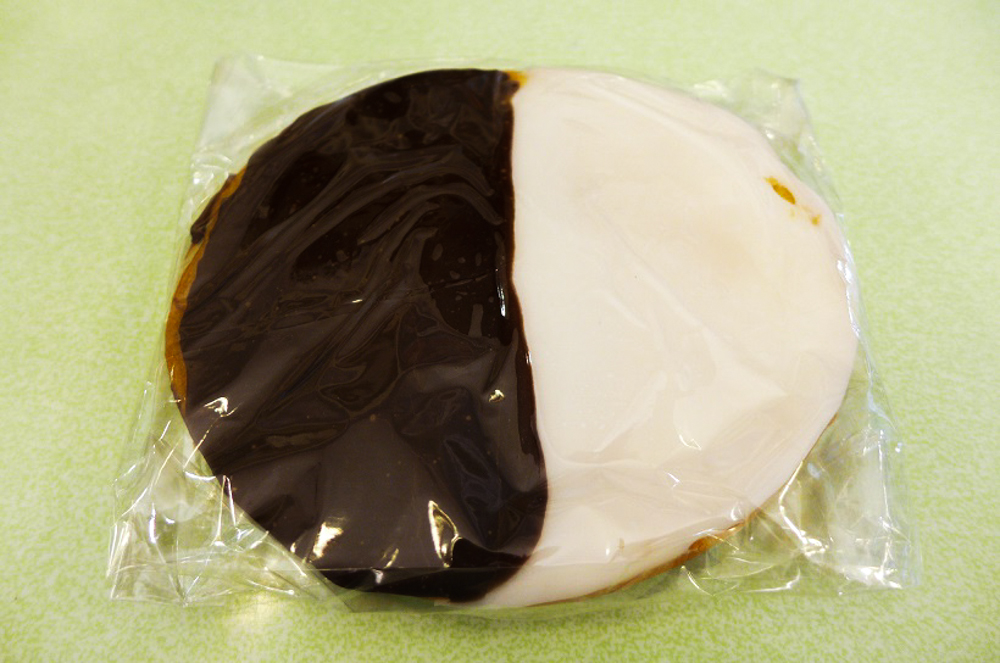 Ruthy's Bakery — The cookie may come wrapped in plastic, but Ruthy's are pretty good anyway, a little on the sweet side and a little firmer than most. It's one of two versions available at Chelsea Market. 75 9th Ave #13, 212-463-8800.