A Visit to Hudson Eats on the Day Before Its Opening

Share All sharing options for: A Visit to Hudson Eats on the Day Before Its Opening

At the new Hudson Eats in Brookfield Place of Battery Park City, about half the stalls were in preview mode today at lunch, prefatory to an official opening on Tuesday. It was evident that some stalls and kiosks would not meet that deadline. "We expect to open on Wednesday," said a representative of Black Seed Bagels. Nevertheless, several stalls seemed to be doing a particularly good business, while others were at half throttle. Skinny Pizza, while not thronged, was selling their super-thin-crust pies, many featuring vegetables, at a steady rate, packed in cardboard boxes that proclaimed their eco-consciousness. 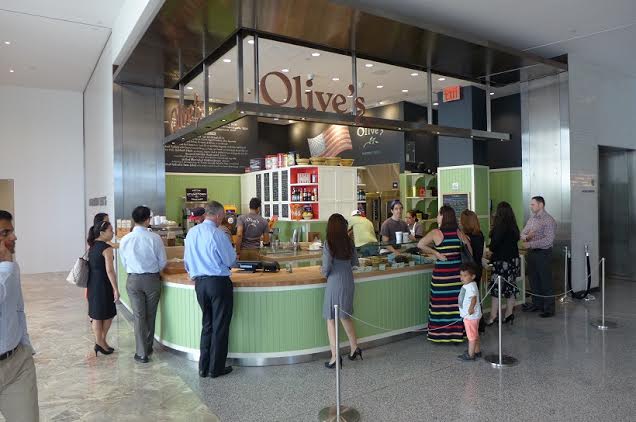 Mighty Quinn's was selling the occasional brisket sandwich, and man was it good. The rectangular-shaped counter called Tartinery, which specializes in open-face French sandwiches, had a few customers gobbling their soupe de poisson — and, believe it or not, the staff and food is authentically French. So too was Num Pang open and selling a trickle of sandwiches, and Olive's was doing a bit better — at one point I spot eight people waiting in line for food, while Dig Inn, a place that describes itself as a Seasonal Market, was doing just as well. Meanwhile, things were slack at Dos Toros, despite the eager staff crowding the counter, and a few customers were dutifully eating their made-to-order salads at Chop't. 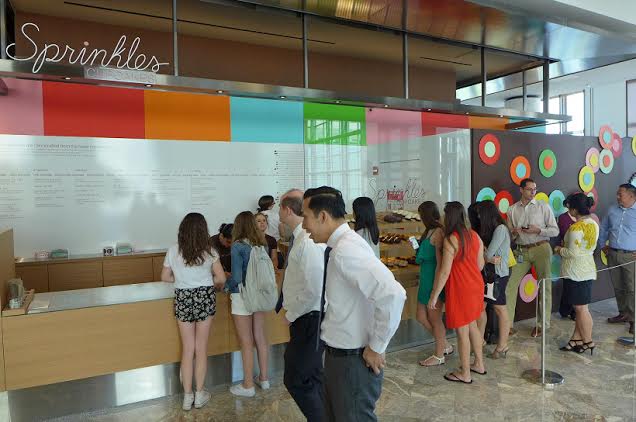 But far and away the place that drew the biggest crowds was a cupcake bakery called Sprinkles. The office workers and suits lining up seemed more interested in snacking than in eating a full meal. Rather than sit in the opulent booths or along marble counters, they chose to take their boxes of small round frosted cakes and bring them back to the workplace.
· All Coverage of Brookfield Place [~ENY~]