I've always viewed the endless line of cars clogging up the Hamptons with the same skepticism as I've looked upon the masses clamoring to get into Keith McNally's latest hot spot. There are other restaurants with as many pretty people. There are other beaches with as much sand.

So whenever my buddies invite me out east, my response is always, "No thanks, I'll stay in Long Beach." It's just a 50 minute train ride from Manhattan. It's where the only transportation you'll need is a good bike or your own two feet. It's where Billy Crystal, Rocky Graziano, and Mario Puzo's Michael Corleone have all lived. And it's where this critic has called home, off and on, since 1998.

Of course, things aren't as fancy on our tiny barrier island as they are in, say, Sag Harbor. The helicopters and seaplanes pass by rather than land here. Construction abounds, not to erect multi-million dollar estates but rather to rebuild the working-class family homes destroyed by Superstorm Sandy.

There's no Whole Foods or Citarella in Long Beach; you'll just have to buy your coconut water at Waldbaums or Key Foods. There's no serious margherita pizza either — not that I know of at least — slice joints are the dominant players. And like elsewhere in Long Island, you'll be more likely to encounter wasabi-crusted tuna or soy-glazed salmon than locally caught bluefish, striped bass, or fluke. So be it.

Want to watch the World Cup? Most Long Beach restaurants have multiple televisions; some even hang flat screens outside so you can watch the game while having a smoke. And then there are the dress codes, like this one at Minnesota's, a perennially packed bro-deo: "No tank tops. No boots. No low hanging pants. Hats front of back facing only. No exceptions."

You can eat well too in these here parts, something I like to remind my Manhattan friends who flee back to the city before dinnertime. No, our restaurants won't rival any of New York's finest, but they're usually a good enough time, and by patronizing them you'll know you'll be helping our Sandy-ravaged city get back on its feet. So here's what to eat (and what to avoid) in and around Long Beach: 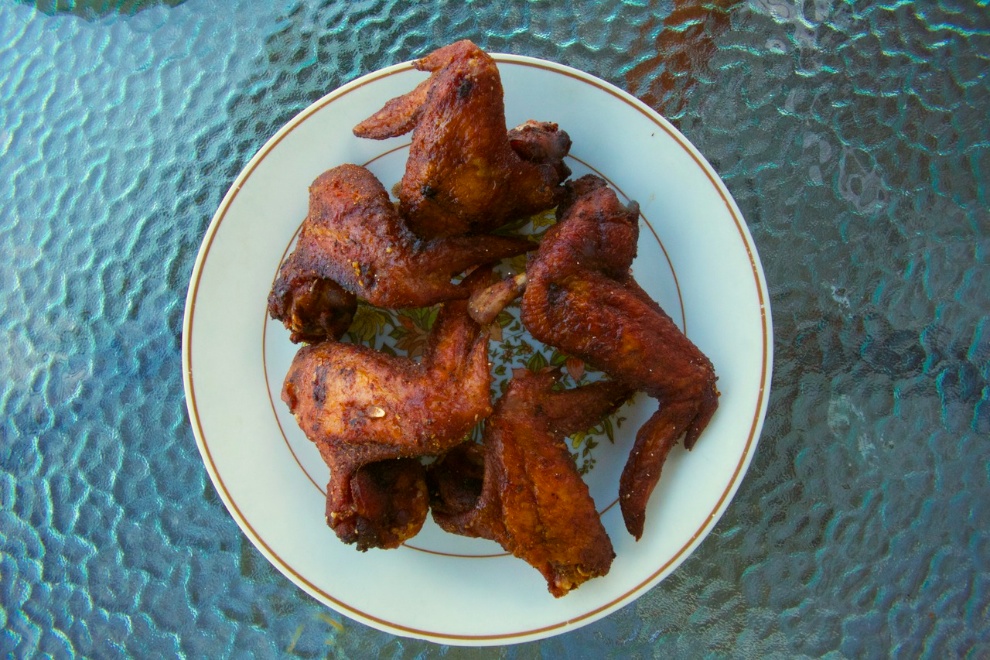 Swingbelly's: Sean Sullivan's barbecue joint, which shuttered for nearly seven months after Sandy, is as awesome as ever, with meats cooked slow and low over cherry, hickory, and applewood. Steer clear of the brisket or pulled pork, which can trend light on flavor and moisture. The money entree is the St. Louis dry-rub ribs ($18), boasting supple, smoky meat and an increasingly chewy exterior as you get to the shorter ribs. Chicken wings ($13) are lightly smoked, fried, and dry-rubbed with a hint of sugar. The fat is sweet, boasting the same gentle chewiness as good bacon. And the meat packs a distinct poultry punch. It is the finest chicken wing I've sampled anywhere. Pair this all with sweet cornbread, al dente spiral mac and cheese, a cold beer, or a strong Dark & Stormy, and there's your perfect meal. [909 W Beech St.; 516-431-3464; website] 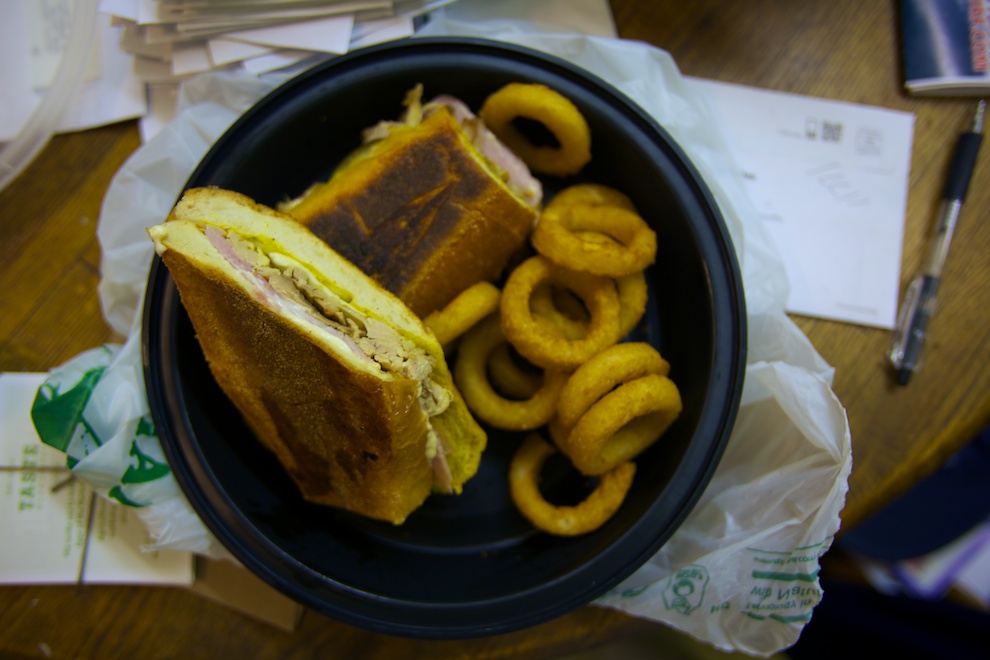 Corazon de Cuba: This used to be the Cuban Crocodile, which closed, like many other local businesses, due to Sandy-related issues. In its place is Corazon de Cuba, which opened in January and ranks with Swingbelly's as one of Long Beach's top restaurants. Beef and chicken empanadas are fine after a dose of salt. Ham fritters taste like what would happen if someone chopped up deli meat into a sausage and fried it, which is to say, not too bad at all.Things get even more interesting with the ropa vieja ($17), a kick-ass stew of shredded skirt steak; the poor man's dish isn't so much a study in beefiness as it is in using tender meat to show off the gorgeous flavors of red and green peppers. And the lechon asado ($15) is everything it should be, garlic rubbed pork cooked so succulently it tastes as if it were Japanese shabu shabu.

And while a more experienced consumer of medianoches like Robert Sietsema might disagree, I'll call Corazon's cumin-scented Cubano ($10) the best I've tried anywhere. The key here is the oversupply of soft roast pork (for fat and flavor) with the other components boasting more normal ratios: deli-style ham (for salt), mayo (for more fat), mustard (for spice), and pickles (for acidity, though there should be more of these). Order it take out if you're rushing to catch the train, or stay and watch the World Cup. [26 East Park Ave.; 516-272-4200; website] 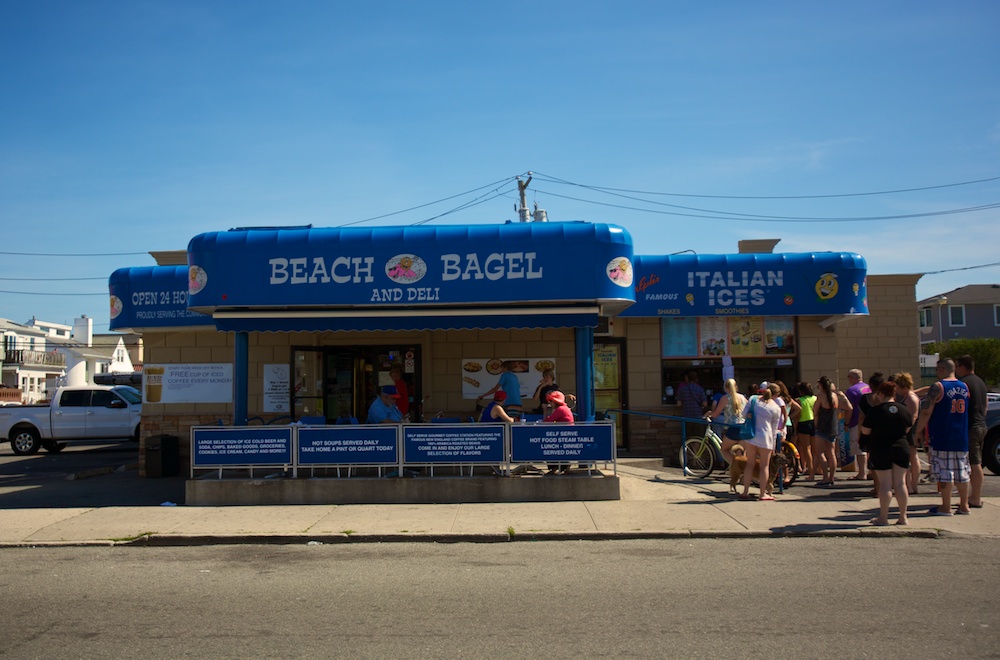 Beach Bagel: Established in 1991, this is as close to a community center in Long Beach as there is; it's open every day, 24-hours a day, even Christmas. The bagels, which are hand rolled, boiled, and then baked on premises, are a hint undercooked — nothing a toaster oven won't fix. The lox sandwich ($8) is too cold (that's bad); the BLT is the most frighteningly mammoth portions of nitrites I've ever consumed (that's good), and the venue is cash only. One more hint — the breakfast grill opens at 3:00 a.m. if you're here that late. [1090 Beech St.; 516-431-7406; website] 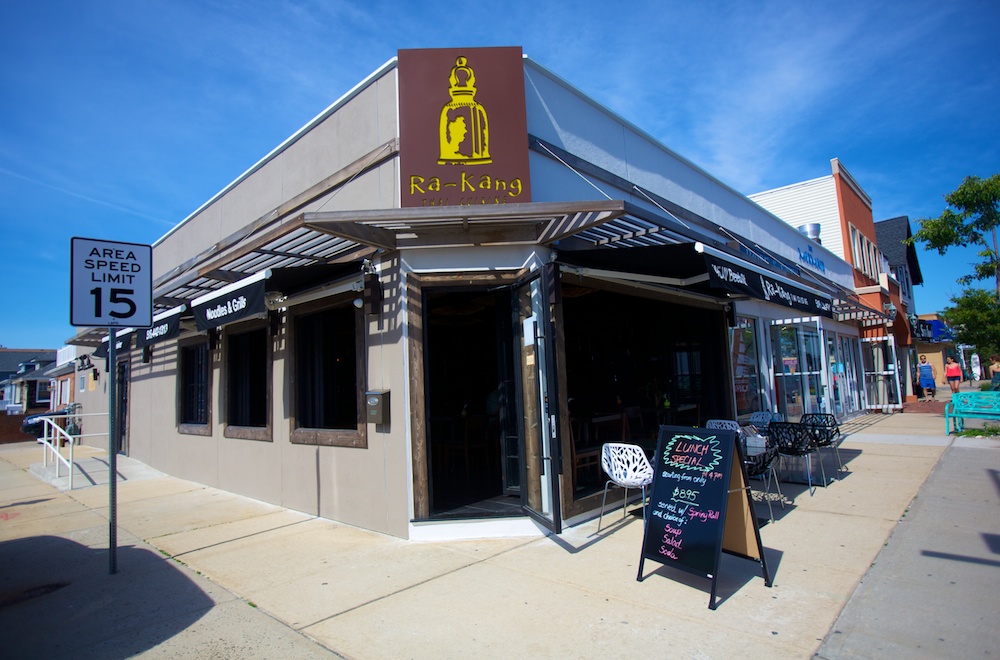 Ra Kang: This Southeast Asian spot is a welcome (and risky) effort in the West End, where fratty bars like The Beach House and The Inn reign supreme. Ra Kang opened in December with a Pan-Thai approach, not in the brilliantly concise way that you might find at Harold Dieterle's great Kin Shop in Manhattan, but rather with the everything-but-the-kitchen-sink approach of a Greek diner. Based on a single visit, Ra Kang is a decent enough place to grab a quick iced-coffee — sweet and strong — and a plate of duck penang ($20); a brilliant mix of crispy, funky fowl and mild red coconut curry. Thai ice tea was aggressively sweet, while the chicken larb ($9) and papaya salads ($9) were watered down, under-seasoned versions of their Isan or Chiang Mai analogues; they lack sufficient salt, funk, and fire. [895 West Beech St.; 516-442-1314; website] 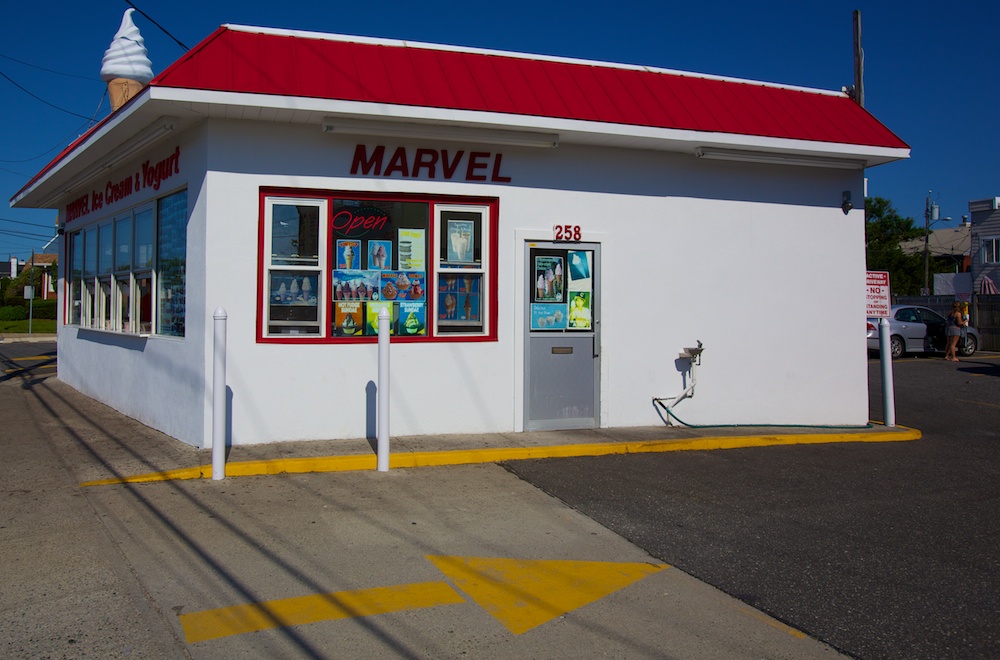 Marvel: Remember how there was a McDonald's rip-off called McDowell's in Eddie Murphy's Coming to America? Well here we have Marvel instead of Carvel and it's been pumping out ice cream since 1951. The house-made offerings are simple: soft-serve or frozen yogurt for $3.75. Toppings will cost you a buck extra. Pistachio is cool and creamy, but the stronger move is banana frozen yogurt, with as much rich tropical flavor as a Michelin-starred dessert and an almost frothy lightness that goes down fast. [258 Lido Blvd, Lido Beach; 516-889-4232]

Pizza: The two main pizzerias in Long Beach are West End (right across from Swingbelly's) and Gino's (across from the LIRR). Which of the two you patronize likely depends on which one you're geographically closest to because both produce a very similar and decidedly average slice. Expect bland mozzarella and nearly imperceptible sauce at both; I prefer West End's slice as it has a hint more garlic and vaguely thinner crust; Gino's is a touch sweeter and the crust, thicker. But really, these are just varying degrees of mediocrity, like comparing Z100 with WPLJ. [Gino's is at 16 West Park Ave. Phone: 516-432-8193. Website: www.ginoslongbeach.com. West End Pizza is at 918 West Beech St. Phone: 516-889-1711.]

Sugo: Here's a venue that feels a bit too much like 2007 (when it opened) or even 1997, though the same could be said of many Long Island restaurants. There's a lot of eyebrow raising material on the global fusion menu. There are "Korean tacos", chicken meatballs, nacho pizzas, yucca fries, and "grouper alla Cubana." If you'd like to know how any of that tastes, go yourself and write me an email. In the meantime, I can tell you lobster bisque ($12) had the gluey texture of condensed can soup on a recent visit and that raw Blue Points ($2) had all the flavor of tap water, with zero brine. And the margarita pizza ($9) was indistinguishable in flavor and texture from any ho-hum slice pizza.

But Sugo does serve one of Long Beach's better burgers. The soft lamb patty ($12) boasts a soft, brownie-like crumble and it sports a distinct mint and lemon kick. This is what a gyro wishes it tasted like. Order one to go for the train ride, or stick around, knock back a Unibroue Maudite, and try the expertly cooked whole branzino ($24). [62 West Park Ave.; 516-431-7846; website] 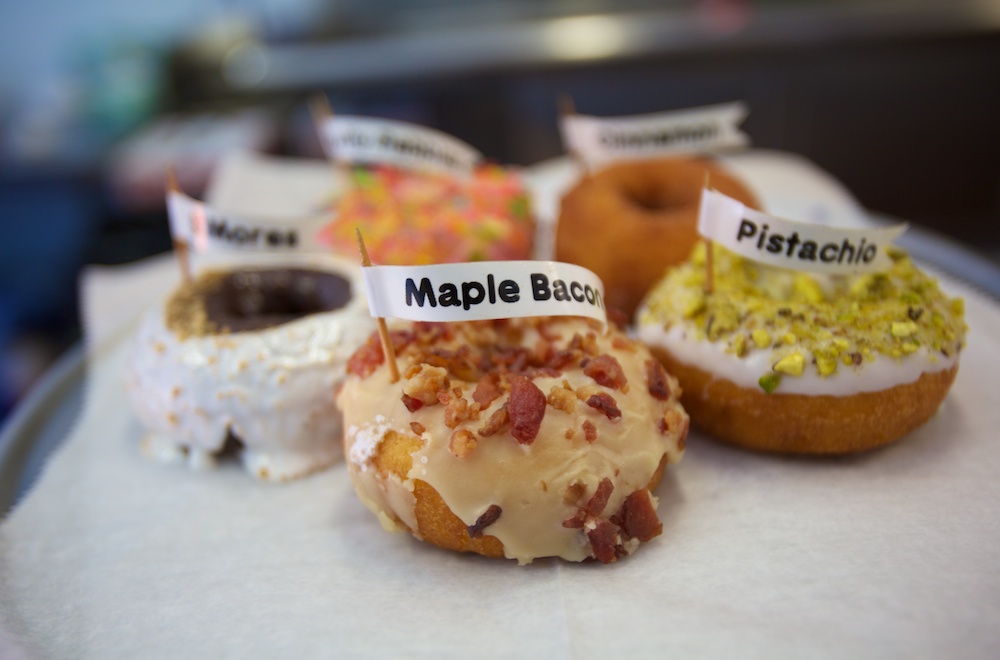 Dough Hut: Don't let me guilt you, but if you're an animal with no conscience who likes Steven Seagal movies and restaurants like Tao or Lavo, you can visit the brand new Dunkin Donuts in the West End. Those who like to support humanity and local business will instead patronize a shop nearby called Dough Hut, founded by Long Beach resident Tim Kelly in 2012. The homemade cake donuts, which cost anywhere from $1 to $2, are everything they should be: hefty (but not dense), never too sweet and tasting cleanly of their namesake ingredients: cinnamon (delicately spicy), French toast (gently syrupy), and best of all Fruity Pebbles (artificially awesome like the breakfast cereal). Cold brew coffee and iced tea also available for purchase. Cash only. [891 West Beech St.] 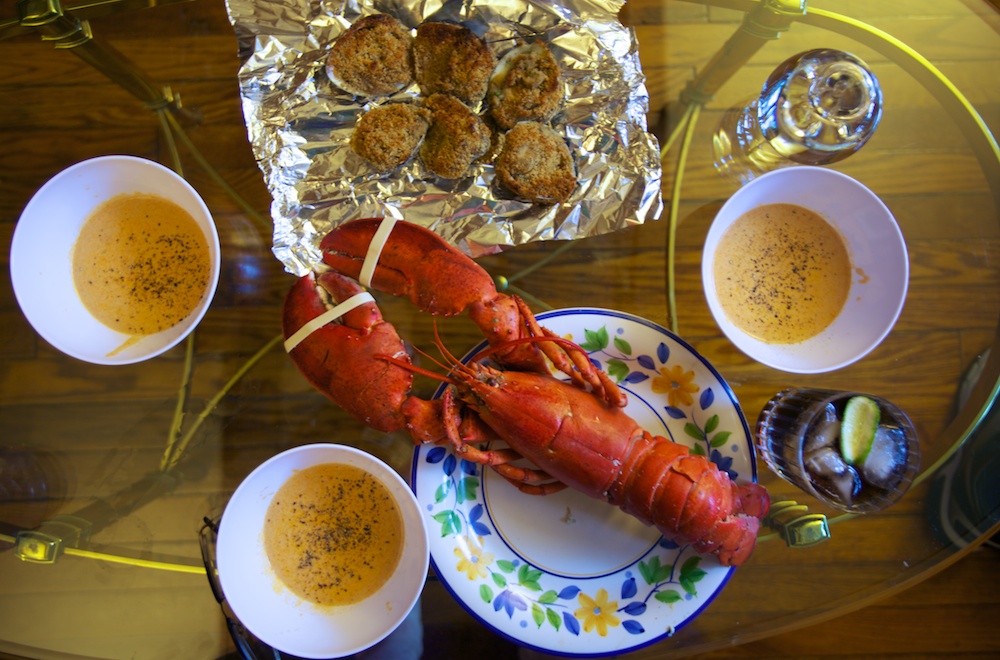 Jordan Lobster Farms: This one's across the bridge in neighboring Island Park, but not writing about Jordan's would be like telling someone about the San Francisco fine dining scene and not mentioning Meadowood in Napa Valley or Manresa in Los Gatos. Get off the LIRR one stop before Long Beach, walk on over, queue up, order lobster. Prices can fluctuate quicker than you might expect; they stopped offering a two pound take-home steamed lobster special for $25 while I was waiting in line (!!!) and charged me closer to $28. Still, that's not a bad deal considering you'll pay double that in New York.

Also keep in mind that certain lobsters can cost a few bucks extra per pound if you eat in, which is pretty reasonable since the markup gets you a stunning outdoor space overlooking Wreck Lead Channel. Expect a fine bisque as well (not too creamy), killer baked clams (ask for the ones that are whole, not chopped), and a decent enough lobster roll that's a bit heavy on the mayo (~$21). Knock back a few beers and it's doubtful you'll spend more than $50 per person for a serious lobster dinner. No offense to the Hamptons, but this is the type of place that makes me jazzed to call the South Shore of Long Island my home. [1 Pettit Place, Island Park; 516-889-3314; website]