For six years Restaurant Abidjan has been lurking on Brooklyn's Broadway, a rough-hewn thoroughfare populated with discount stores, criss-crossed by stray cats, and plunged into perpetual shadow by the J and Z tracks that clatter loudly overhead. The restaurant, named after the Ivory Coast's largest city, glows late into the evening, a welcoming presence on a darkened block near the Kosciusko Street station. A grid in the window displays the entire menu in 22 color photos, including several stews (called "sauces") paired with polished rice, boiled yams, or foutou; a pair of whole-fish platters; plus fried and jerked chicken, which are intended mainly as a come-on to non-West-African patrons. 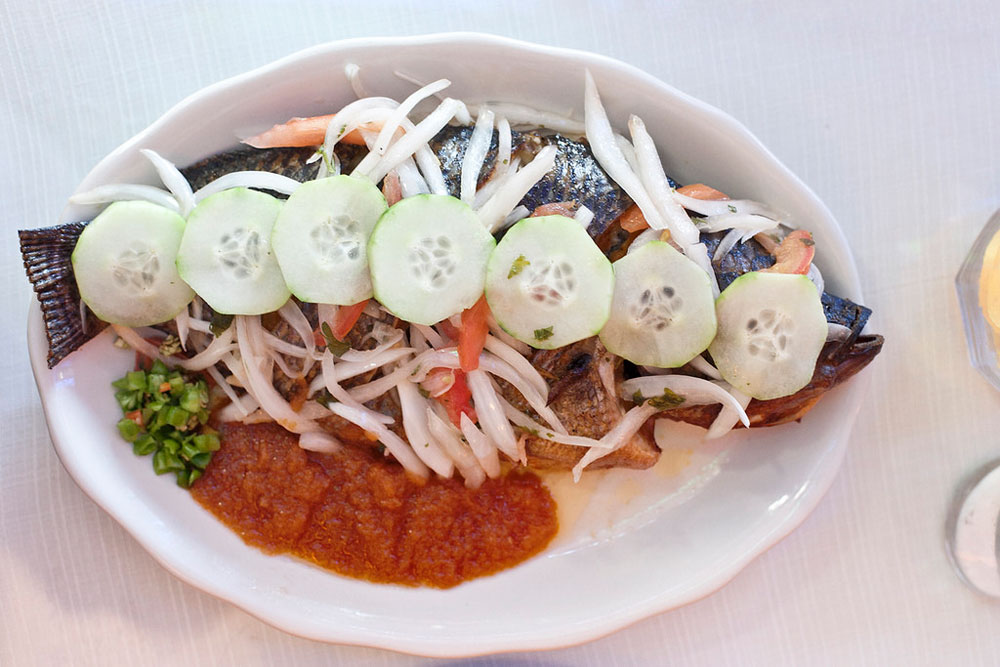 The interior of the restaurant is deep and high-ceilinged, boasting a broad white counter at the rear that looks like the check-in desk of a modestly priced roadside motel. For some unfathomable reason, a string of holly with red berries runs along one wall up near the ceiling, while another wall is devoted to a rack of gangsta-themed videotapes from Jamaica and Nigeria. A large TV at the front of the house alternates mournful international news with Ivory Coast hip-hoppers wearing animal-print dashikis, backed up by gangs of undulant female dancers not quite in step. The proprietor will come around the counter to greet you, brandishing menus like the one in the window, only smaller and protected by plastic.

Fully enjoying the city's West African eateries takes some practice. You must throw away many of the assumptions you usually bring to a restaurant meal. At Abidjan, after examining the menu, one must begin by asking the jolly, gray-haired proprietor what dishes are actually available that day. Chances are it will be only four or five. In many West African restaurants, the menu is considered a speculative document, generally listing every dish the cook can think of, even ones she has no intention of making. At least the menu gives you a good idea of what constitutes everyday fare for the average Ivory Coast citizen. Without as much meat, of course.

Yes, Abidjan will feed you well, but you can never be sure what.

Your implied social contract with this type of restaurant guarantees you'll be fed a delicious, abundant, inexpensive, and perfectly prepared meal — not that you'll be able to fully exercise your dietary preferences. In this regard, Restaurant Abidjan resembles the earliest European restaurants, medieval lodgings where the innkeeper felt obliged to feed weary travelers, but only offered a single meal assembled at his whim. Yes, Abidjan will feed you well, but you can never be sure what.

Toss away the idea of courses, too. There are no desserts. There no sides or apps, either, though a plate of sweet fried plantains ($6), enough for three to share, can function in a pinch as a starter, side dish, or even dessert. Also don't expect much in the way of beverages, though a pint of ginger or sorrel punch ($3.50) made with pineapple juice is often available. Leaving a burning sensation on the lips, the ginger is especially recommended. But the restaurant devotes so little attention to stocking beverages, your best bet is Mexican or Japanese beer from the Palestinian bodega a block east. Hooray for BYOB! 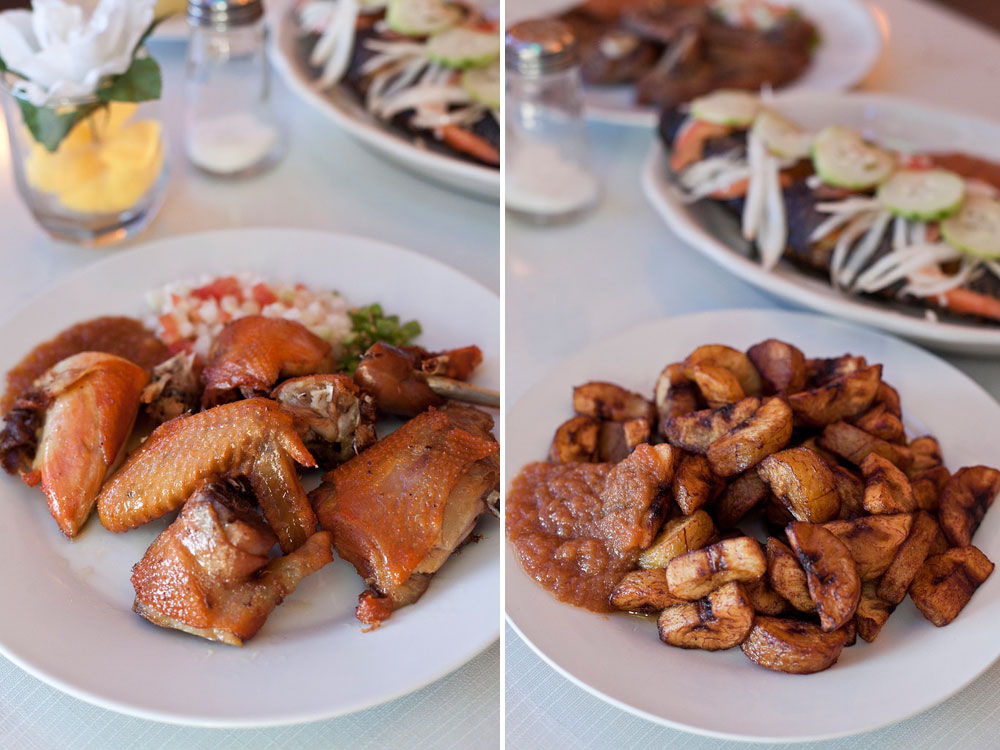 So what should you expect to eat at Restaurant Abidjan? If you're lucky, the peanut sauce ($7) will be available. It's like a liquid peanut butter sandwich, though one that has meat bobbing in it – either lamb, oxtail, or chicken, depending on the mood of the cook. Order foutou to go with it. This is a mash made of plantain flour, notable for its bouncy texture and plainish flavor. Nip off a piece with your thumb and forefinger and dip it deeply in the sauce, then close your eyes and chew. There are other mashes, too, including placali, an oblong wad of fermented yuca with a sour taste, said to satisfy hunger longer than milder mashes. Other alternatives include a plain plate of polished white rice, and something called tomato rice ($5), which is a moist morass of grain soaked in red sauce with some mixed vegetables thrown in, tasting like something you might find in a Spanish or Mexican restaurant.

Sporadically available are okra, palm-oil, eggplant, and chicken sauces ($7 each). The okra provides a lesson in mucoidal viscosity, and every friend I've taken to taste it has fallen immediately in love. If nothing else, the sauce demonstrates a familial connection between Louisiana Creole and West African cuisines. The palm oil sauce is reminiscent of the kind of canned meat gravy you might ladle over your instant mashed potatoes in Mid-America.

The dish presentation is refreshingly rudimentary. Grilled lamb ($7) is three good-size chops accompanied by nothing but a pool of the same tomato relish we've seen before. Paleo dieters take note. Something you shouldn't miss once you've tried the peanut and okra sauces is the national dish: a fried whole snapper, head on, accompanied by attieke (pronounced "ah-check-ay"), a tart stodge of fermented manioc meal that looks like white couscous. As with the sauces and mashes, you must buy the components of the meal separately ($12 and $3, respectively). To fully enjoy the attieke — which can be a bit dry on its own — mix the tomato relish and chopped French salad that comes with the fish into the starch before consuming it.

On the other hand, the perfect fried chicken ($7) beckons. And remember that Restaurant Abidjan is perched on the northern border of Bedford-Stuyvesant, which is fried chicken's true New York home.

Our review of Abidjan

Cost
Dinner for two with two starches, a sauce, and a fried fish, $26 pre-tip.
Sample dishes
Peanut, okra, or chicken sauce with foutou or polished rice, fried or steamed fish with attieke, fried chicken, fried plantain.
What to drink
The place is BYOB, so bring wine or beer. One block east is a corner deli selling beer next to a liquor store that allows you to make your purchases by viewing the inventory through Plexiglas. The restaurant's ginger and sorrel (purple hibiscus) drinks are worth sampling; turn them into cocktails with a pocket flask.
Bonus tip
The BYOB feature of Restaurant Abidjan is a wonderful thing, but matching rich, saucy West African fare with wine is a challenge. I would go with a relatively high-alcohol Italian white such as a grechetto or pinot grigio, or a French rose if you want something lighter. Red wines won't work, except with the plate of grilled lamb chops. Beer is an obvious choice and is especially refreshing in this context.

The Thai Scene in Hell’s Kitchen Just Got Even Better