Who said non-alcoholic drinks are safe? It's 7:30 p.m. at Whiskey Soda Lounge and I'm sucking down limeade without regard for the brain freeze that will follow. May my cranial health be damned — I'm quelling the pain of Manila clams with chiles. The metallic sting of the shellfish, the porky wallop of the broth, and the punch of the peppers are perfectly balanced — albeit at nuclear warfare levels of balance. So relief is crucial. The limeade lasts me a good five minutes, while the caffeinated Thai iced tea is gone in one. And I won't fall asleep until four in the morning.

Our party is silent. We're coping with the spice and watching the Stanley Cup Finals on the big flatscreen. Snacks are coming out fast, less then 10 minutes after ordering. There's dried and grilled squid, as chewy as jerky and with 10 times the flavor of fresh calamari. There's flank steak with phrik khaa chile paste, intensely tender and slightly bland. Then there's the waiter. He comes over and tells us that Pok Pok NY — the larger sister spot next door — is ready for us. Yep, this is only the beginning, because you just spent your 60-minute wait for a dinner table by having a separate, smaller dinner, at an actual table, watching sports. This is what I call ideal. 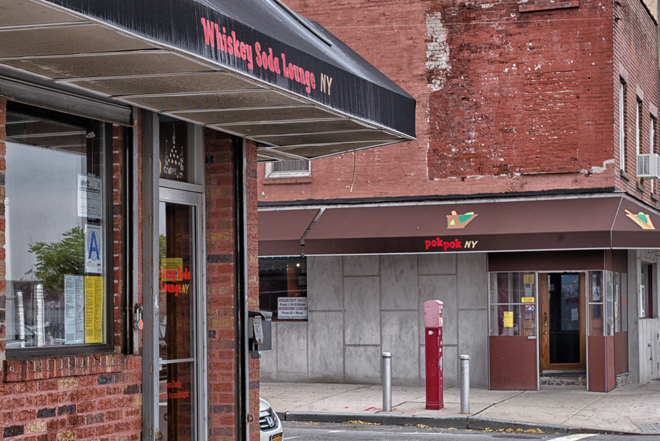 It's a good time to be spending time on South Brooklyn's Waterfront because Pok Pok, chef and restaurateur Andy Ricker's newly-relocated Thai restaurant, is hitting its stride in a serious way two years after opening. Remember how ugly things got that first summer of business? Lines to get in stretched down the block. Sometimes cocktails wouldn't come until after your food arrived. And service was once so bad I had to raid the service station myself for napkins and utensils. But that was then. 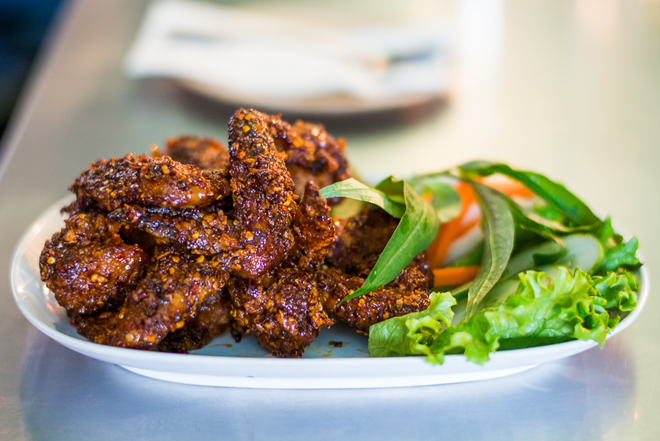 Ricker opened Soda Lounge to help make the wait more bearable. Then he found a new space for Pok Pok with more indoor seating and a larger kitchen; it opened in November. He kicked off all-day service on the weekends to help get rid of those crazy lines. He made the entire menu available via takeout (fish sauce wings + Game of Thrones = SCORE). And he a launched breakfast with damn good Chinese pork buns; you can be in and out in 10 minutes flat and spend less than $15 after tea, tax, and tip. That is cool.

"The era of the three hour wait is over," the restaurant's director of operations, Matthew Adams, tells me. That is very cool. 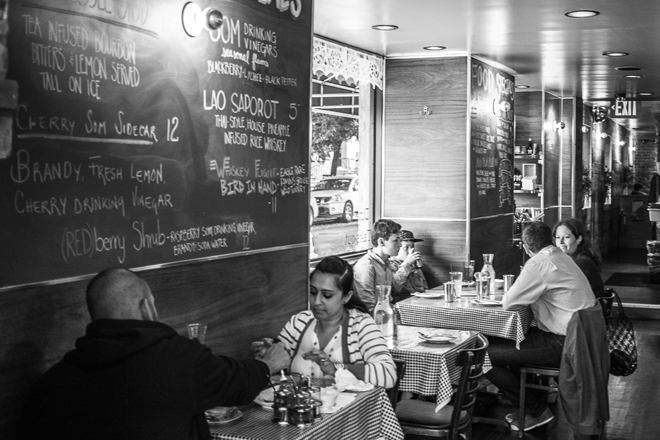 Pok Pok is a prime example of how good restaurants often need a year or two to get their act together.

The story is simple: Pok Pok is proof that a high-profile (yet bare bones) neighborhood restaurant can turn itself into a real destination with a little practice, a few extra creature comforts, and a bit of that precious commodity known as time (and perhaps money). Or put more succinctly: Pok Pok is a prime example of how good restaurants often need a year or two to get their act together. So sometimes we critics give them a re-review. This is one of those times.

Not that anyone ever expected anything less from Ricker. The dude, a Vermont native, made a name for himself at his flagship Pok Pok in Portland, Oregon, serving his take on the fragrant food of Northern and Northeastern Thailand. "I'm not a chef. I didn't invent this stuff…I'm a proud copycat," he writes in his cookbook, which you should read cover-to-cover before you eat at his restaurant, just as if you studied The French Laundry Cookbook before you dropped $700 at Per Se back in 2004. As Australian chef David Thompson writes, "Andy has almost singlehandedly created a market for regional Thai cuisine in the United States."

In other words, Ricker eschews the American-friendly rainbow curries of Thailand's South and relegates his pad Thai noodles to a separate outpost in Manhattan. It all seems ballsy enough until you realize that Pok Pok highlights the deliciously accessible smorgasbord of meat salads that one might find in Chiang Mai or Isaan province. In fact if I were Ricker, and you should thank The Good Gods of Gastronomy that I'm not, I would've named the joint "Meat Salad" and cashed in with the carnivorous Thai equivalent of Chop't or Sweetgreen. 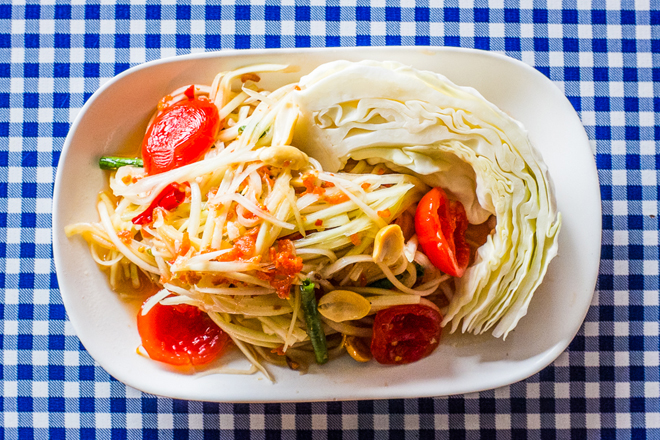 Fortunately, Ricker went with Pok Pok, an onomatopoeic nod to the sound a mortar and pestle makes as it tenderizes green papaya for its som tam lao. "Looks like coleslaw," says my father. Tastes a bit different. Chefs pound the fruit just enough to let it absorb the right amount of key lime, sugar, chile, and fish sauce. It's all balanced enough until you ask for the version with salted black crab, which makes the dish taste as if it were seasoned with the remnants of seagull-pocked crustaceans that had been drying up on Rockaway beach for the last three weeks. That means it's funky. I dig it.

Smart guests will start with that treat as well as with the hand minced swine salad, an addictive mix of ground pork, cracklings, fried garlic, mountain cilantro, and just enough long pepper to make your brow sweat. I watched in awe as a friend who recently got back from Southeast Asia consumed this the traditional way, using pockets of sticky rice to snatch up the meaty morsels with her hands, the cheaper starch acting as an edible implement to extend the flavor of the more expensive pork. I on the other hand used a spoon to shovel the protein-heavy bounty into my mouth as if I were participating in a competitive eating contest. 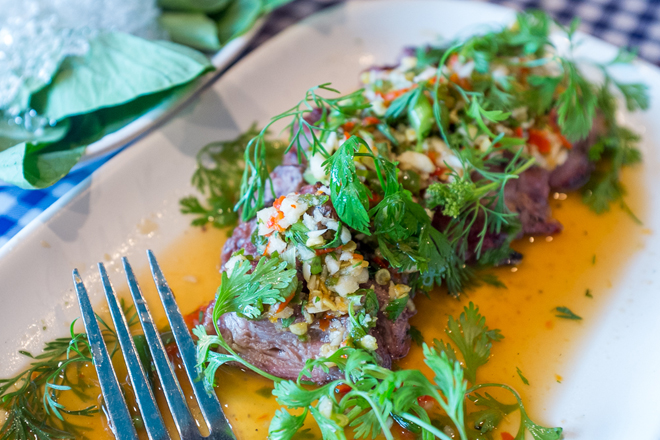 I apologize. It was that good. The laap, as it's called, could go head-to-head with any of its analogues at Zabb Elee or Somtum Der in Manhattan and come out on top — and of course it doesn't hurt that the drinks are better here at Pok Pok. Suggested beverage pairing: A tall-ass gin & tonic infused with enough Kaffir to qualify as incense.

Another suggested pairing for the pork salad: The pile of herbs and vegetables they come with — which waiters can name and describe with remarkable accuracy. There are too many to list here, but hone in on the Thai eggplant (whose soft seeds are like vegetarian caviar), bai makhok (like sorrell but with twice the sourness), and rau ram (imagine lawnmower juice cut with wasabi).

Just as tasty is the sweeter Isan flank steak salad, with toasted rice powder, lemongrass, and a boatload of mint. No, there's not a whole lot of beefy flavor and that's okay; many of these dishes don't show off the proteins in the same way as you might expect at, say, Craft or Minetta Tavern, where the quail or the steak is the star of the plate. At Pok Pok, the meat rather acts as a savory delivery mechanism for all the firecracker-like herbs, spices, and sauces. 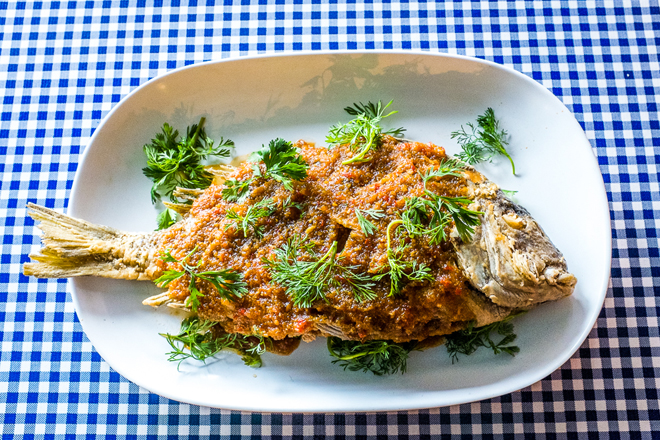 Take the whole poussin, a relative steal at $21. Don't expect the concentrated flavor of poultry, but rather a neutral, tofu-like creaminess to show off the aromas of the lemongrass stuffing. Or consider the charcoal-grilled boar collar, whose job is to act as a succulent sponge for a chemical-weapons strength garlic-chile-lime sauce. It's not until you chew a few times and suck out all the juices when you detect that subtle musk of the boar coming through. 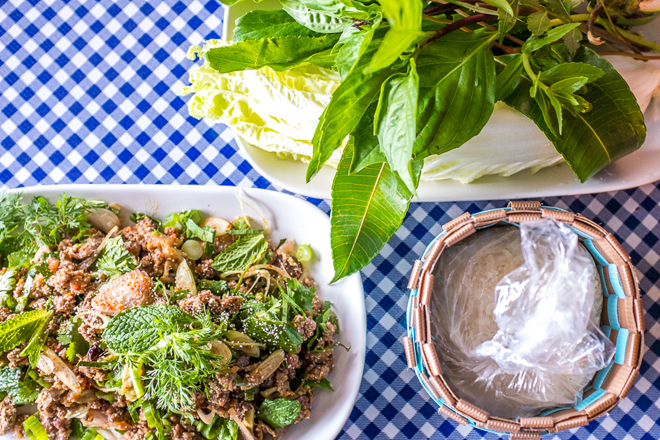 The ambience is lean — as it should be. Expect Thai ballads on the sound system, plastic covers on the tables, and charcoal-tinged aromas in the air. Pay attention to servers, as the good ones will tell you to balance out the spicier fare with milder dishes — like the lemongrass sausage, a superb deep-fried porgy, firewater spinach with pork, or fiddlehead ferns in oyster sauce.

Misses are rare. Beware the khao soi, a mild curry soup that tastes like someone dumped a can of wheat noodles in unflavored coconut milk. Avoid the catfish cha ca la vong, a study in soft textures and bland flavors. And sometimes getting a beer can still be a five to 10 minute hassle. 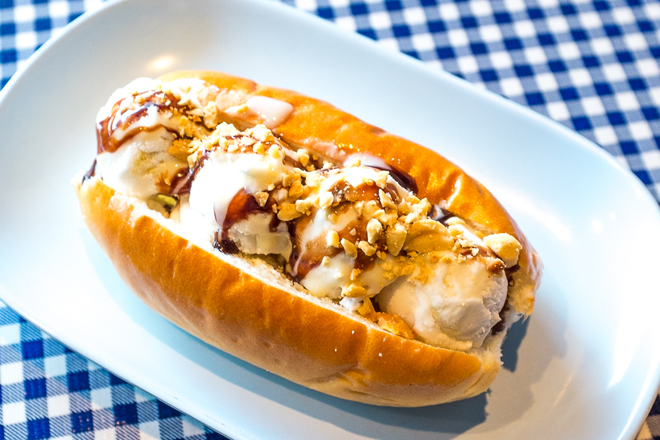 Expect strong desserts with unusual balance. If the condensed milk affogato seems too sweet that's because the donut dipping sticks are not. If the mango with sticky rice tastes different that's because there's salt in the coconut milk to keep the sugars in check. If the durian custard seems edible, that's because the fruit's signature notes of fermented toe jam and rotten garbage water have been dialed down.

Part of me believes a gentle fish sauce haze hangs outside Pok Pok but I'm reasonably certain we're all just smelling our own Thai food-stained clothes — gotta own that perfume like a pro.

Our review of Pok Pok Ny