The Donut Moves Into the Future

Share All sharing options for: The Donut Moves Into the Future

Over the last few years, many ma and pa donut shops that were once a feature of New York neighborhoods — often with a snaking counter where patrons also ordered egg breakfasts and lunch fare like sandwiches — have been pushed out of business by the rapacious Dunkin' Donuts chain. But is there life beyond Dunkin' Donuts? The new Holey Donuts! seems to reply with an emphatic "yes," but is it, in the long run, any better? 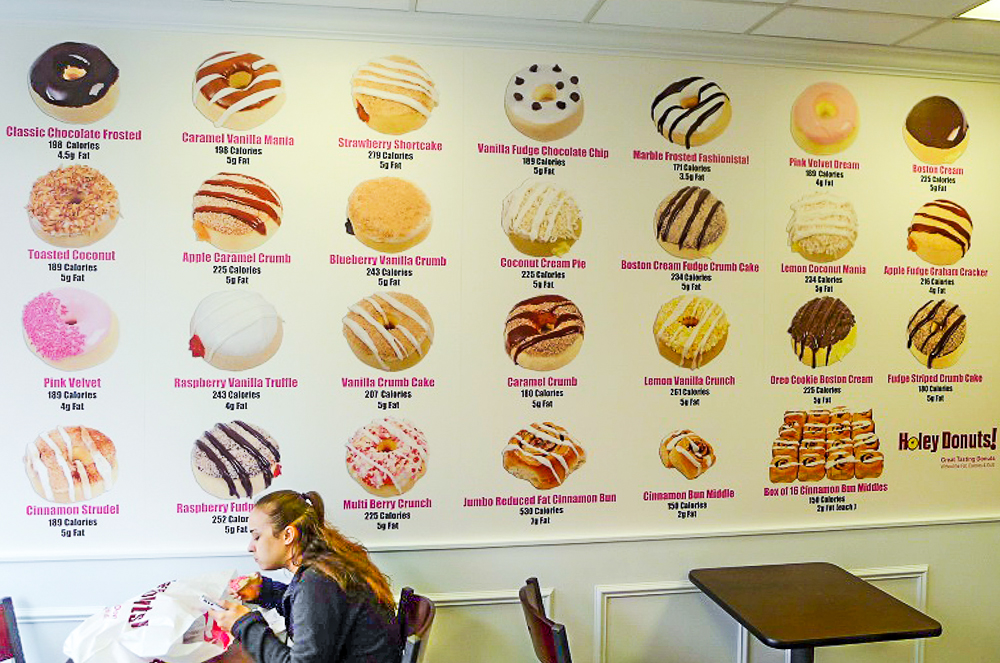 The first branch of what must be a prospective chain has just opened at Sheridan Square in a corner storefront that once held a vitamin shop aimed at body builders, and then a short-lived cupcake bakery. Everything about the new place is different than a traditional donut shop. There's little seating and colorful supergraphics are plastered on every wall, mainly in shades of pink and brown. One entire wall contains a blow-up of the donut menu, which includes filled and unfilled varieties. The first surprise is that each donut is assembled to order. The starting point are pale donut blanks stored in tiers in steam cabinets behind the counter. When you place your order, the uniformed attendant — she couldn't have been much older than 18 — reaches inside, grabs a donut blank, and then dips it in one of the tubs of frosting, then in jimmies, chocolate chips, flaked coconut, crumbles, cinnamon, graham cracker crumbs, caramel, etc., depending on which of the 26 pre-set combos you've chosen. "I can also make anything you think up," she perkily exclaimed. The donuts averaged $3.75 apiece. 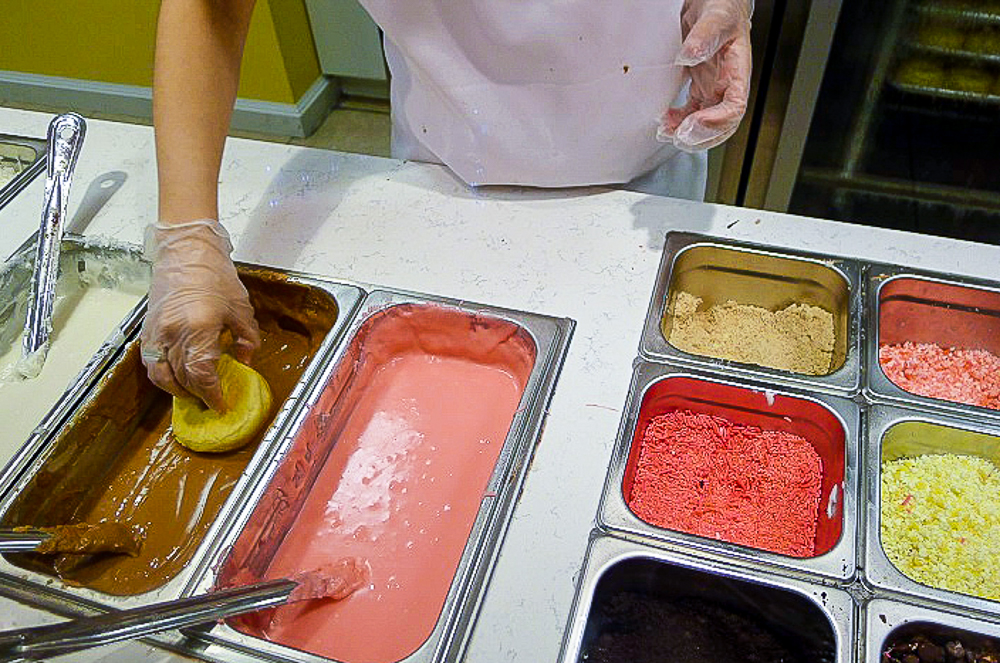 I ordered four donuts for test purposes (pink velvet without sprinkles, chocolate frosted with sprinkles, caramel vanilla mania, and coconut cream pie), and each was put together in about 15 seconds by the attendant, by dipping the blanks sequentially in an array of perhaps three dozen tubs. Then she wedged my donuts in a box that was a little too tight, as the frosting gleamed like the finish on a new sports car. 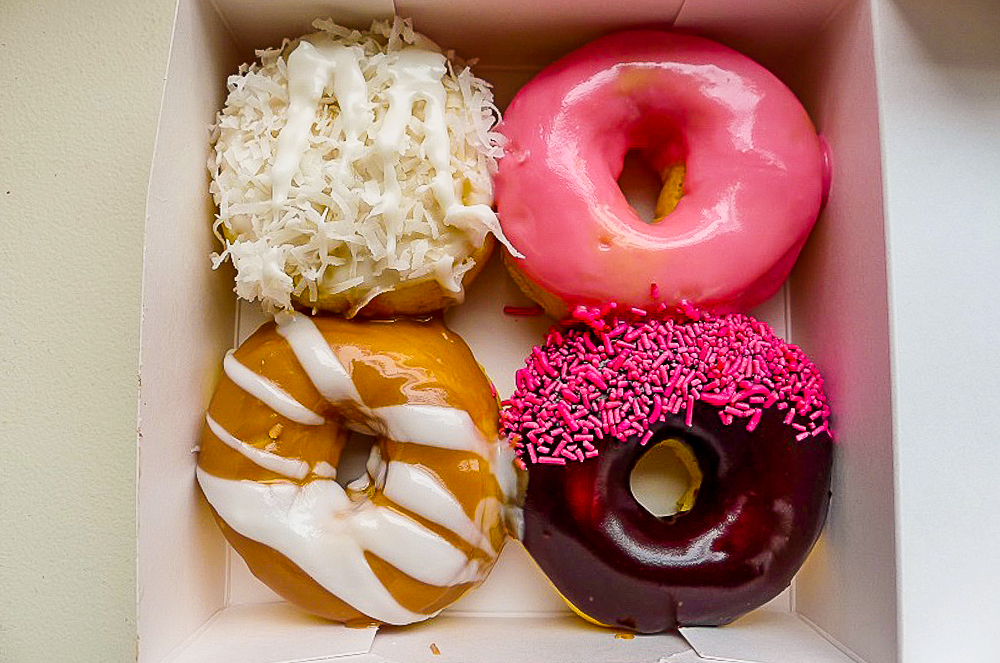 Once home, I assayed the donuts. First the cake. It was dense and anemic, with virtually no flavor or sweetness. In fact the thing resembled bread from an inferior commercial bakery. This is the secret behind the low calorie and low fat counts — the donut itself has almost no sugar or fat. So all the action is in the toppings, which explains the whole emphasis on eye-socking colors and on the assembly of the product. This is basically a similar approach to 16 Handles, where the consumer is dazzled by the number of topping choices, so that the bedrock flavor of the actual yogurt fades in importance. You might enjoy Holey Donuts! just as much if you had the attendant dip your hand in the frosting and simply licked it off. 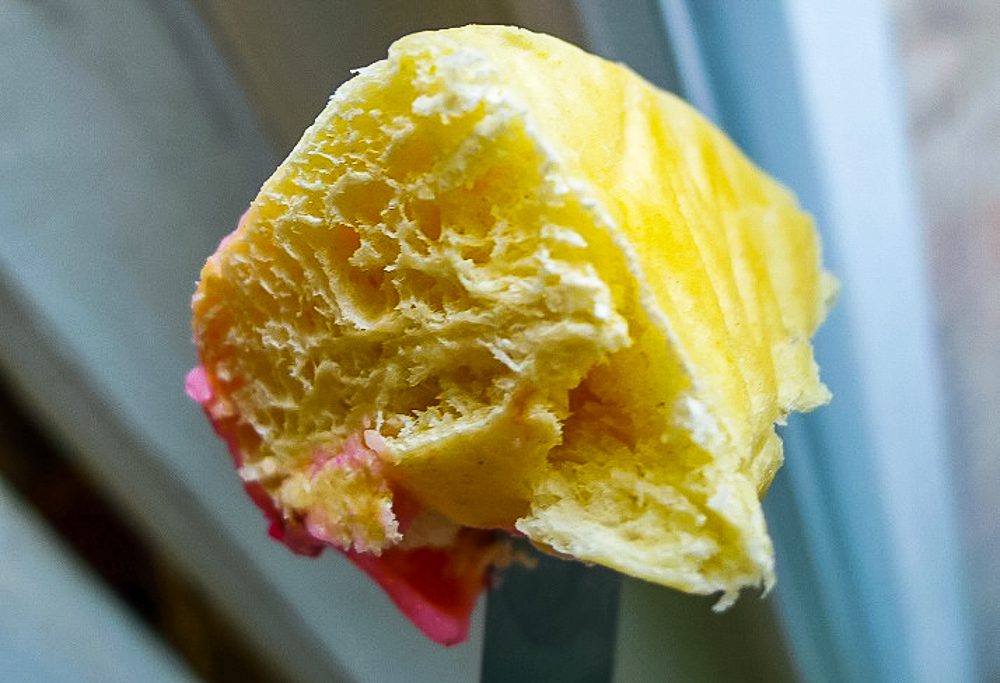 But how good are the frostings, which are the center of the flavoring program? I found the chocolate quite good, dark and fully flavored, though more like Hershey's than, say, Jacques Torres. The strawberry was simply awful, like Pepto, only pinker. The caramel was properly salty, but the caramel flavor went to war with the cake's blandness, and lost. The coconut was made with the heavily sweetened baker's coconut one buys in the supermarket. Toasted coconut would have been nicer, if only to cut the cloying sugariness.

The business practices of Holey Donuts! are interesting in themselves. No cash is accepted, so you have to use your credit card. When you sign the iPad screen ("Use your finger," the attendant advised me), you are warned that your receipt will arrive by email, as soon as you give them your email. Your only other choice, according to the clerk, is the button that says "No Receipt." Is it legal to refuse to provide a receipt for a transaction unless you give an email? One might applaud the company for conserving paper, only the process of ordering involves checking options off on a large sheet of paper, and when you get your donuts home, you'll also discover a wad of cardboard advertising placards has also been dumped in the (unrecyclable) plastic bag.

Is Holey Donuts! the future of donuts? As happened with cupcakes, does the cake part of the donut virtually wither away like a disused limb until all we have left is frosting? Greasy and sugary donuts came to New Amsterdam with the first Dutch settlers. Now Holey Donuts! hopes to be their undoing.
· All Posts by Sietsema [~ENY~]