Share All sharing options for: Jesse Schenker's Pork Chop at The Gander 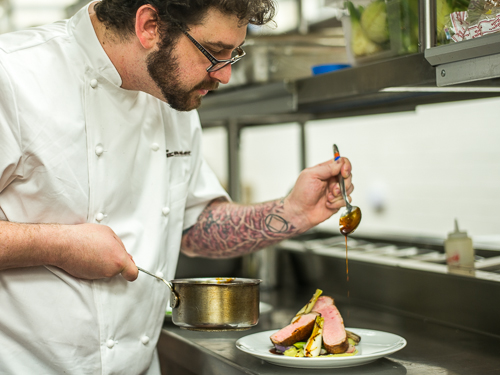 "I am not trying to reinvent anything with this dish, I am just melding the classics" says chef Jesse Schenker of the pork chop on the menu at The Gander, his new casual American restaurant. Despite having the hallmarks of contemporary American cooking — a swath of brightly colored seasonal spring vegetables set atop a pastel green puree of spring onions, and a pork chop that's evenly pink from edge to edge — the preparation is decidedly old school in many ways.

"During recipe testing I cooked pork chops 15 different ways, I just found that slow cooking is the best way to do it. And I don't mean sous vide, I use a Cvap," says the chef. Schenker cooks an entire center cut loin to an internal temperature of 145° and then lets it rest — confit style — in rendered pork fat. At service, the individual chops are cut from the loin and seared in a pan before being basted in garlic, thyme, and butter. The chef says this gives him "a perfectly cooked pork chop and you can pick it up in five minutes or less." The pork is from the fabled Japanese Kurabuta breed, sourced from Snake River Farms, and the vegetables come from the nearby greenmarket. The spring onion puree is actually a mayonnaise of sorts as it incorporates eggs and vinegar, again drawing on classic technique but unitizing it in a contemporary context.

Editor markup for Jesse Schenker’s Pork Chop at The Gander. This is only visible in the story editor.