Share All sharing options for: You Guys: Mission Chinese at Frankies 457 Totally Rocks

It was somewhere between the squash porridge and the peppered pork belly when I realized that my single meal at the weeks-old Mission Chinese pop-up in Brooklyn would be better than any meal I had at the half-year-old Mission Cantina in Manhattan. That realization occurred about two minutes into dinner. Ninety-minutes and nine or ten-courses later I was convinced it was one of the best meals of 2014. For this privilege I paid $35, in cash, collected at the door, like at a high school rec center hosting battle of the bands.

A winding Chinese dragon lantern hung above the space, emitting red lights throughout, which means your Instagram pics look like garbage. Rightly so, you're here to eat.

Chef Danny Bowien knows how to do it old school. And while I'm typically opposed to cash-only spots now that we can all use our American Express cards to pay for dinner in Ulaanbaatar, I'll make an exception for Mission Chinese. Those talented boys could use the extra scratch, and so they'll continue to host this series of prix fixe dinners at Frankies 457 in Carroll Gardens as the restaurant searches for a more permanent home.

"We've been up against the wall paying everyone the last six months. We've basically been bled dry."

The place succeeded by doing what the original did right, serving a freewheeling take on cardboard box take-out fare, often to fellow chefs, late at night, in what was essentially a ramshackle tent of a dining room. I was there at least once a month. Most dishes were under $20, could feed three, and contained immoderate quantities of salt and Sichuan peppercorns. And a portion of the proceeds from every entree purchased went to the Food Bank for New York.

Then it was closed by the Department of Health last October and stayed closed. Pest problems from nearby construction were partly to blame, so the search began for a new space. 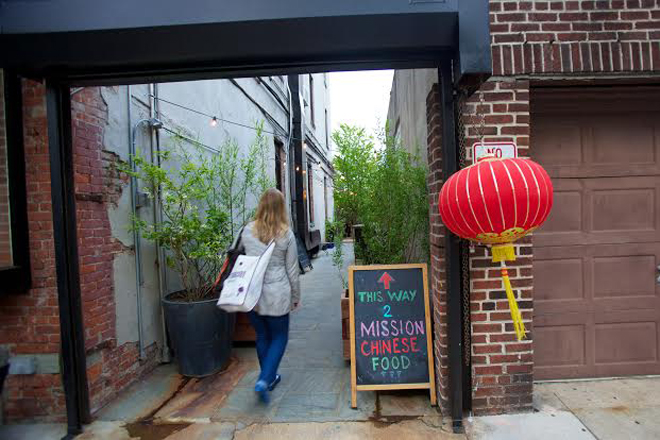 In the meantime, we have a pop-up. "I feel like MCF needed to come back. The idea of it is very important to me. It's a very comforting thing," Bowien said during a phone interview last week. But there were financial motivations as well. "We needed to raise money because we're trying to re-open and trying to keep my staff on retainer," he said. "We've been kind of up against the wall paying everyone the last six months," said Bowien, adding that the landlord from the now-closed Lower East Side space had been charging him rent for the past six months. "We've basically been bled dry." 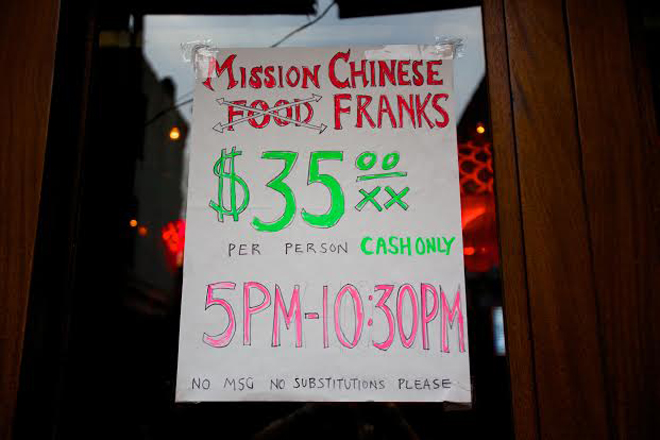 Given all that, and given the amount of food offered, few would blame Bowien for charging $40 or even $50 for his current menu. But $35 is the price for now. No objections here.

So on nights when the pop-up is active — check the Mission website for dates — just walk through the "driveway entrance" at Frankies 457 and pay your admission. Take a seat, and the food, essentially a greatest hits list of MCF dishes, starts coming. Here's some of what I ate on Monday:

1) Rice porridge. It's hot and warming and contains big hunks of squash, with salted chili for heat and flavor. Has as much flavor as a meat-based soup but I'm told the dish is vegetarian. Gnarly.

2) Red cabbage. This is all about the flavors of the gently bitter vegetable and the earthy sweetness of the toasted buckwheat it's paired with. Gorgeous. Wouldn't be out of place at Blue Hill at Stone Barns. 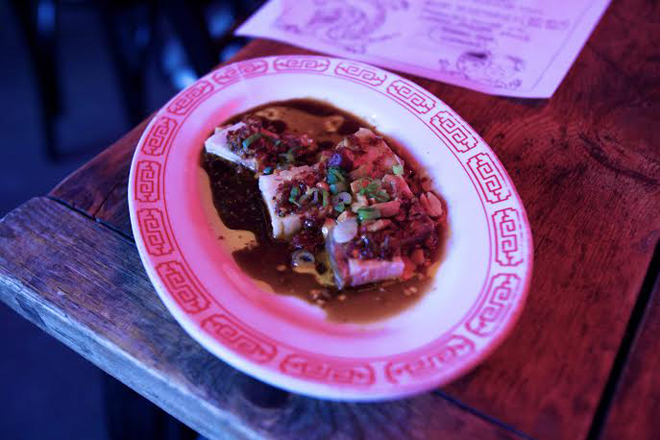 3) Pork belly. The Sichuan peppercorns start coming into play here. They emit a gentle buzz, while black vinegar cuts the richness of the swine. The pork, incidentally, packs so much delicious fat it could pass as Ukrainian Salo (cured fatback). I dig it.

4) Giant rice noodles. This one's thick and round and looks like a spent bull penis covered in good herbs. Sweet dill perfumes the pasta while a peanut sauce adds some serious savory flavor. Consider this dish to be the calm before the storm.

5) Chongqing chicken wings. Here's your rock and roll MCF classic. Eating these peppercorn dusted wings is like having a thousand bees with novocaine venom sting your tongue at once. It hurts and numbs at the same time, but mostly hurts, as it should. Things get easier from here.

6) Bacon with rice cakes and kung pao pastrami. Alright, now we're getting full. But the good news is that while the rice cakes and pastrami could inflect serious pain at the original brick and mortar spot on the LES, these variants seem to have been toned down to fit into the pace of the larger meal. Or who knows maybe I got lucky.

7) Mapo tofu. Let's be real here. Bowien knows how to dish out some solid grub but his mapo (tofu in chili oil) has always been his weakness. It lacks the porky, MSG-roundness as better versions at Cafe China and elsewhere. This thin version, served with squid ink noodles, is a skip.

8) Asian greens: Is this our little homage to Pok Pok? Bowien lays the whole leaves over ice and drizzles them with smoked oyster sauce. The flavor is astonishing: a wicked sweet-salty punch up front and then a delicate maritime tang on the finish.

What do you drink with all this? A light, bright bottle of Weihenstephaner; a big glass of cold, fizzy Lambrusco (remember, this is Frankies); or a floral Brooklyn Gin and tonic.

Bowien says he'll keep doing the pop-up "as long as it proves sustainable, and as long as people are coming out," while adding that Frankies owners Frank Falcinelli and Frank Castronovo are giving him a "great deal" on the space. "They're like my big brothers. It's crazy how much those guys give so much of themselves to try to help people out, especially us," Bowien says. 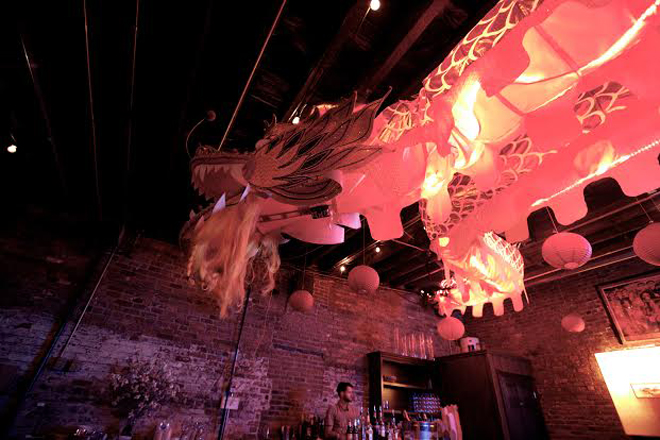