Mexican is the break-out cuisine of our era, just as Italian was a decade ago. When ambitious chefs dabble these days, they dabble in Mexican. Tiny tortillas made in-house from scratch, reconfigured burritos, cross-cultural nacho toppings, diddled guacamole, ceviches twisted every direction, and Mexican elements fused with other cuisines (e.g., Korean) have become major gastromemes. Mexican restaurants are opening up faster than ever before, so that now the city has at least 2000, from dirt cheap to hilariously expensive.

So it was with seemingly impeccable timing that Philadelphia restaurateur Stephen Starr (New York's Buddakan and Morimoto, plus 14 restaurants in Philly) finally landed his Mexican concept in Gotham. No diminutive cantina, the humongous El Vez — rather obscurely named after a Mexican Elvis impersonator –occupies a half-block of Vesey Street, a stone's throw from Danny Meyer's Blue Smoke in Battery Park City. Apart from the de rigueur sidewalk café, the premises consists of a king-size barroom just inside the entrance foyer, plus three large and one small dining room, each with its particular ambiance, but all looking very much like a corporate shopping mall restaurant in Topeka. The theme is more Old West than Old Mexico, with weathered gray barnwood, bleached longhorn skulls, decorative touches seemingly selected at random (such as the glass jars of bolts suspended over my booth), and black-velvet pictures of Elvis winsomely smiling in a cowboy hat. Or is it El Vez? 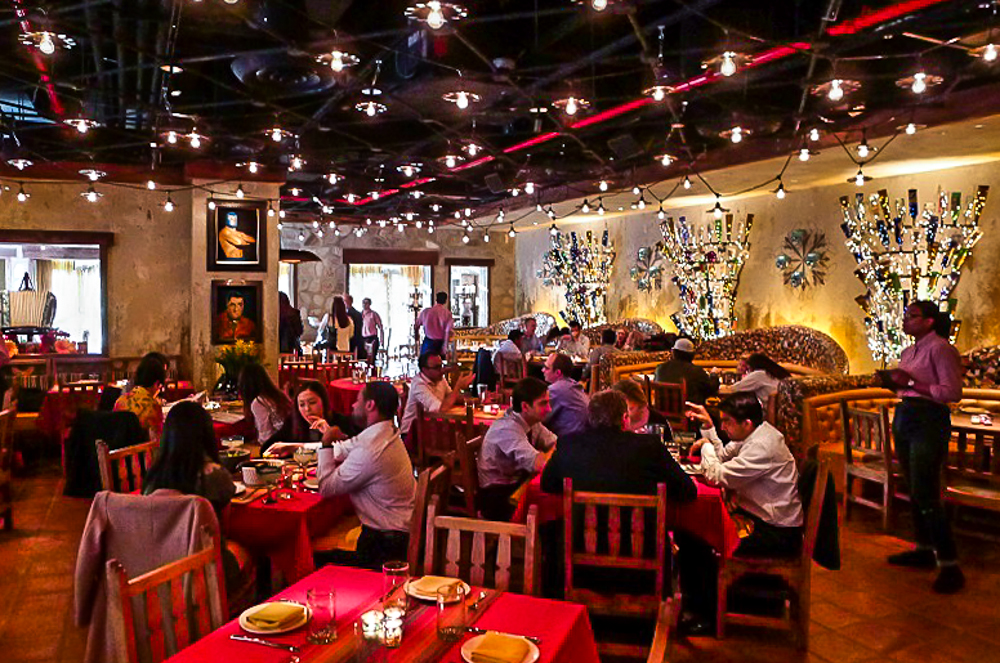 It was chaos when I entered early in the evening hours, the place hopping with brokers in Brooks Brothers suits, their ties loosened, knocking back shots from an amazing list of nearly 100 tequilas and mezcals, and families who live in BPC, out for an early dinner with their toddlers. The easy coexistence of the two groups in the same restaurant is a testament to size and soundproofing.

It's interesting to examine the menu of the original Philadelphia branch (where the slogan is, "Mexican-American meets East L.A. in a Tijuana Taxi"). The dish overlap is about 75 percent, but the City of Brotherly Love has more California flourishes (such as a Cesar Chavez guacamole), more vegetarian options (zucchini and corn "colache" tacos, "hibiscus" enchiladas), and lowbrow come-ons like a hamburger with smoked poblano aioli (lunch only). The biggest difference is in the higher-priced entrees called Especialidades. While the Philly menu includes predictable selections such as red snapper Veracruz and shrimp in chile sauce, ours mainly features meat and fish in more sophisticated presentations, topping out with a cowboy steak at $55. The New York bill of fare also adds some daring regional Mexican fare such as tlayuda, "arabes" tacos, and goat barbacoa. 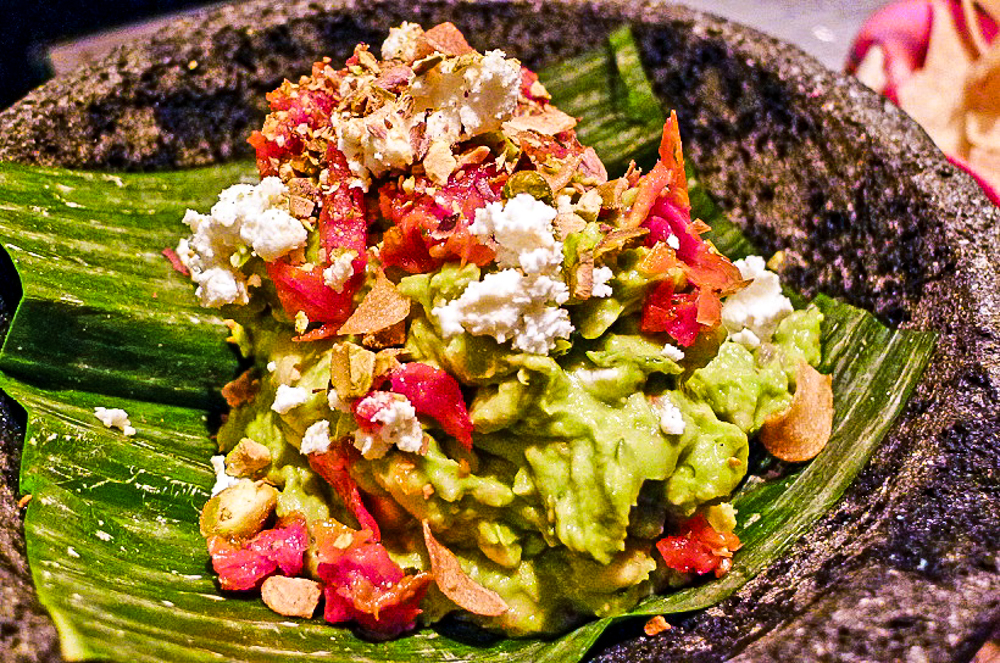 I had the pleasure of visiting El Vez with L.A. critic Jonathan Gold and Mexican food aficionado Scarlett Lindeman, both well-versed in the Mexican food available in California, which El Vez seems partly concerned with. First to hit the table was "bazooka limon guacamole" ($16), one of three guacs listed on the menu (Philadelphia has six), none strictly doctrinaire. This rendition featured goat cheese, chile flakes, pistachios, and amorphous gobs of roasted tomato, and came accompanied by a big basket of freshly fried chips. Digging into the variegated mass was a challenge, to see how much of the over-pureed avocado you could get onto your chip without too much extraneous matter. Later, the guac began turning brown. "Hey, that's a positive sign that it's freshly made," noted Lindeman, with tempered appreciation. 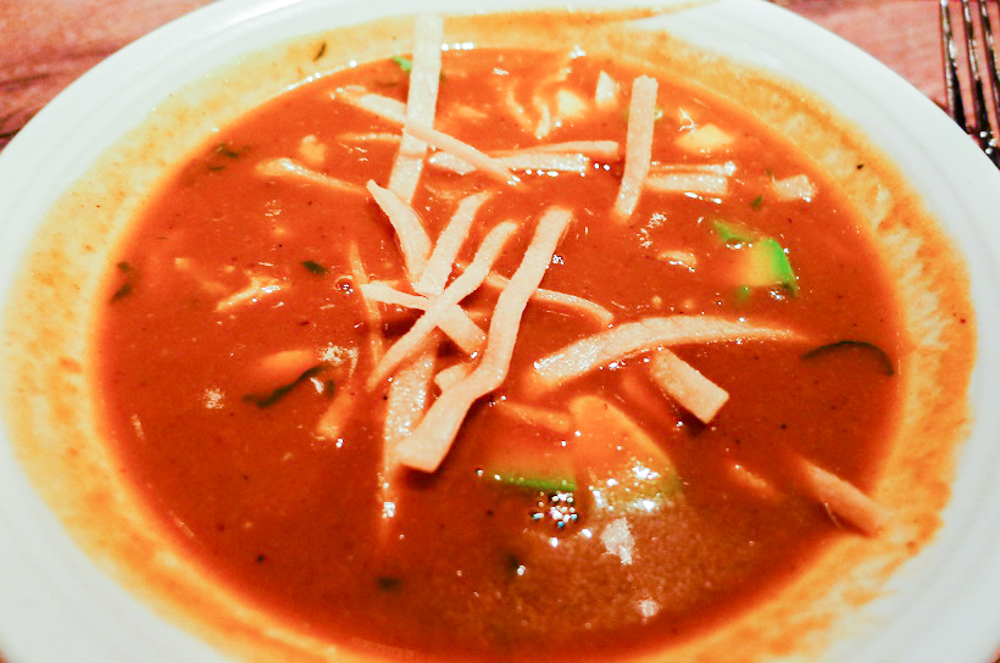 Though the bazooka guac wasn't bad, the tortilla soup — at six bucks one of the cheapest things on the menu — was. The broth had the consistency and saltiness of canned brown gravy, the strips of tortilla already hopelessly limp. But we hung onto it, and added a spoonful of the gravy to dishes we received later, since there was no salt shaker on the table and some of the food arrived underseasoned. 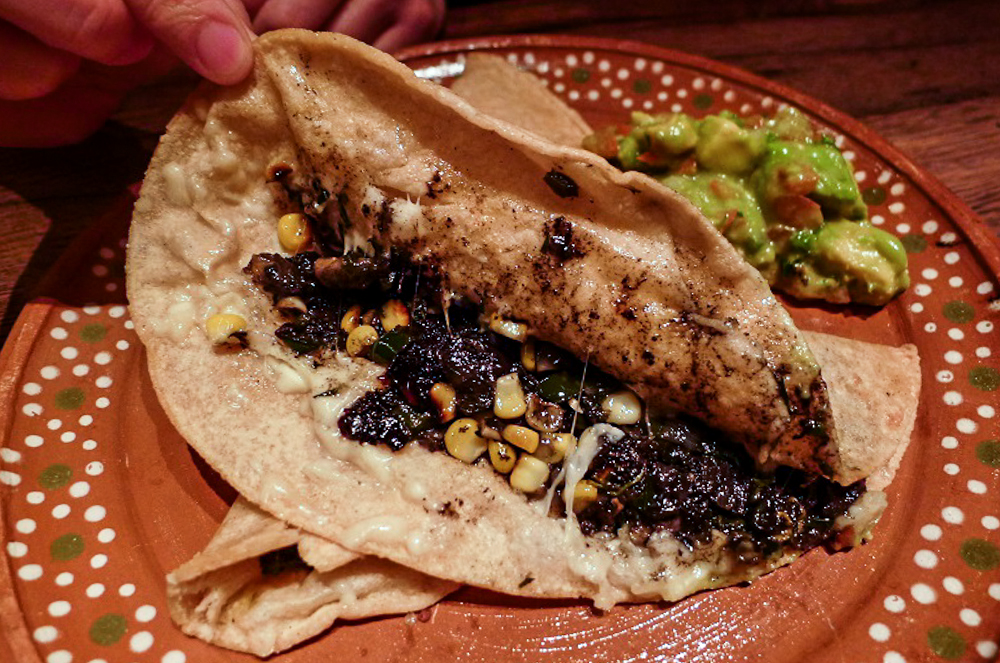 Next to hit the table was a huitlacoche quesadilla ($13), the black fungus rather grandly described on the menu as "corn truffle." The two-quesadilla order was generous, with a good quantity of corn smut (a more accurate description of huitlacoche), and a dab of actual plain guacamole on the side. Still, the quesadillas were mind-numbingly bland, and no hot sauce was offered. 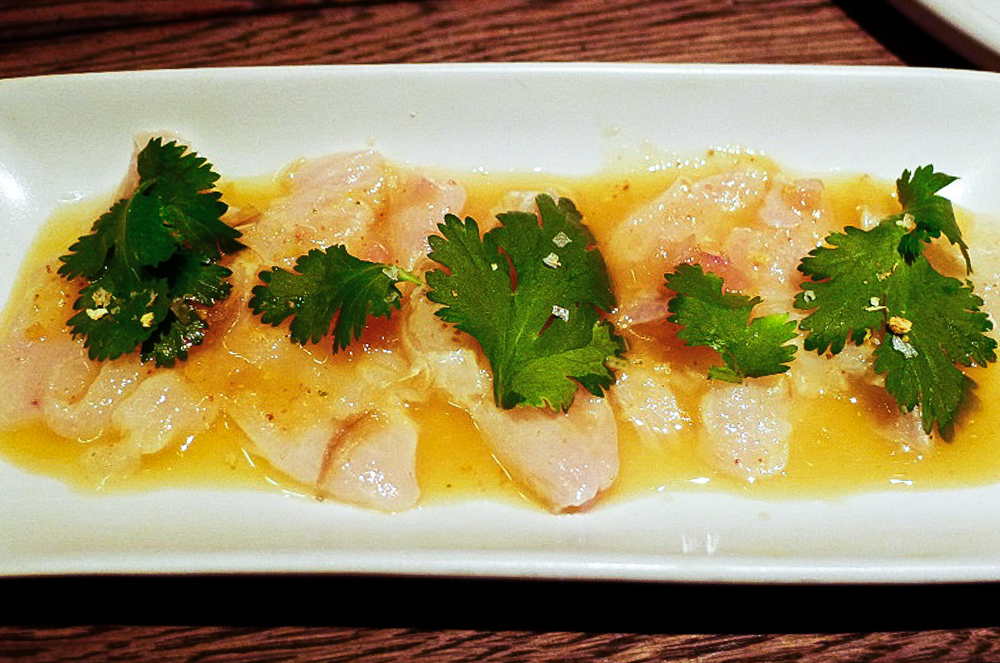 Snapper aguachile ($12) was the best dish of the meal, raw fish medallions in a citrusy marinade of ginger and cucumbers. There wasn't much identifiably Mexican about it, but who cares? 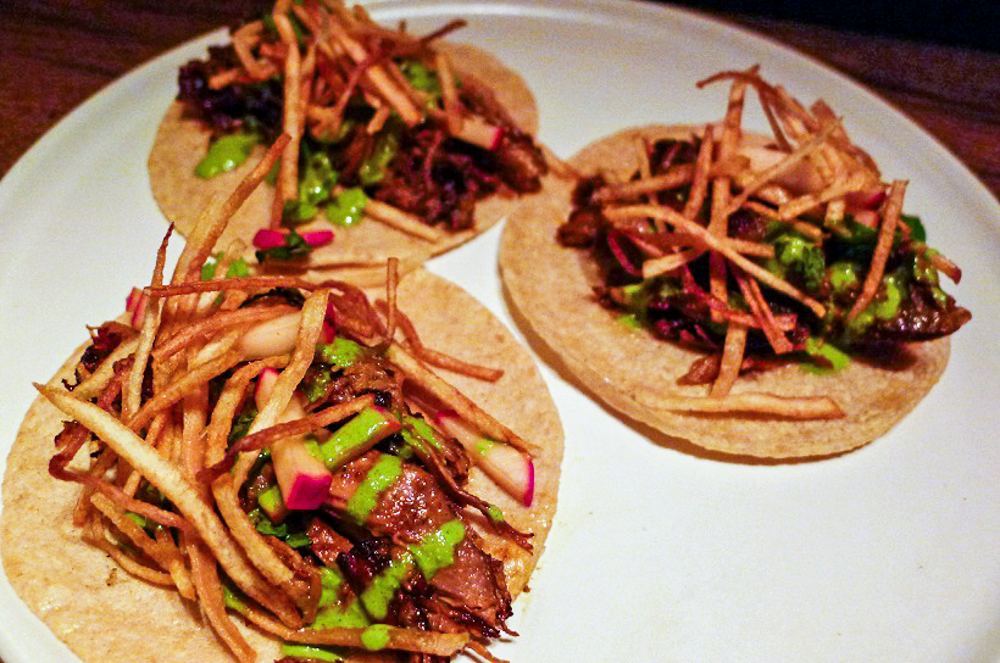 Less inspiring was a trio of lamb tacos "arabes" ($19), which we hoped would be tacos made Arab-style, rolled with flour tortillas like shawarma, originally brought to Mexico by Lebanese immigrants in the mid-20th century. Instead, we got taquitos with some decent pulled lamb, heaped with pickled radish and potato matchsticks like the kind found in a can. "This isn't really that inauthentic," piped up Gold with a snicker, "except in Mexico I guess the topping would be shredded chicharrones." 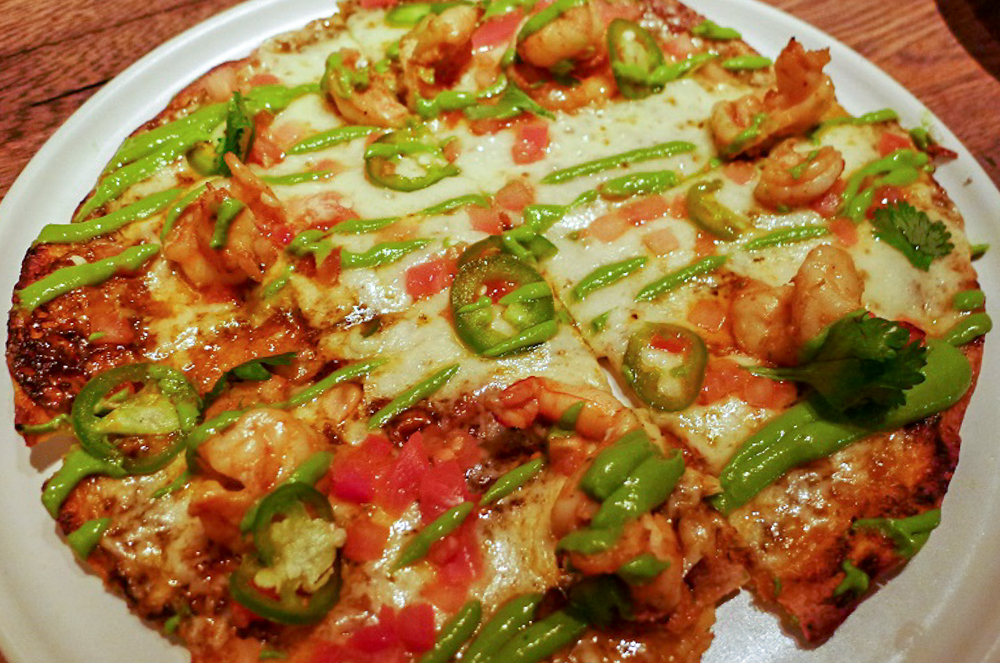 But the meal really went off the rails when the tlayuda ($15) arrived. This beloved standard, common in L.A. but nearly nonexistent in New York, is sometimes known as a Oaxacan pizza. Underpinned by a giant baked corn tortilla of coarse texture, it's topped with things like grasshoppers, lard, black beans, shredded white cheese, avocado, and various meats. What sat before us was a deep-fried flour tortilla squiggled with various sauces and dotted with pickled jalapenos and shrimp. "I know a four-foot-four woman with a shotgun who'd be glad to go after whoever made this thing," noted Gold disparagingly, referring to one of L.A.'s sainted tlayuda makers, who spend days making the perfect crust from parched corn. "It reminds me of the Taco Bell pizza," Lindeman added. The shrimp tlayuda remained largely uneaten. What is it about New York that nobody seems capable of making a proper tlayuda, we wondered? 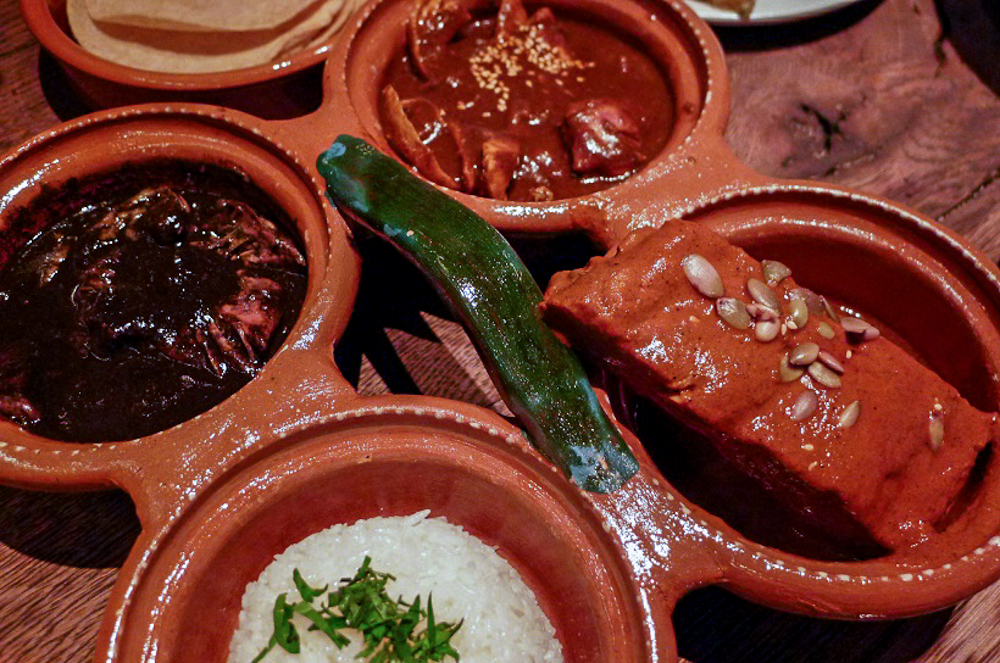 For our last selection from a menu that left much further to be explored, we picked one of the big-ticket Especialidades. Predictably, we chose the facetiously named "holy mole!" ($25), a selection of three pre-Columbian moles. Two were fairly common in New York already: a Oaxacan black mole and a Pueblan mole poblano. The third was the rarer mole pipian rojo, a red sauce made with pumpkin seeds. They respectively contained lamb, chicken, and pork rib. Not bad, though with three mole selections to work with, the offerings might have been more diverse. Lindeman liked the mole negro with lamb the best. The thing came in a four-part ceramic crock, with the last receptacle devoted to oiled rice. Really, not a bad entrée. 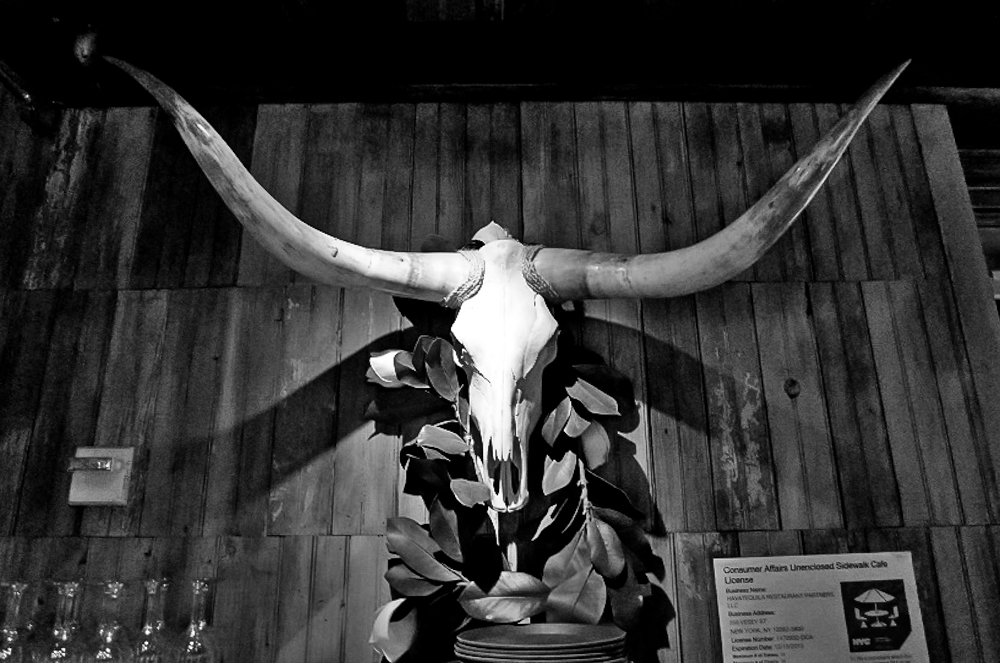 As we finished up our meal, washed down with beer ($6), Mexican chardonnay ($8), and strong margaritas ($12), Gold's eye lit on an antique sign on the other side of the dining room advertising birria, alambras, and pozole, none of which appear on El Vez's menu. "Gee," he exclaimed, "this is the only restaurant I know of where they put up a sign on the wall for a far better restaurant." Some of the food wasn't horrible, noted Lindeman, "it just didn't taste Mexican."