In each installment of Pastry Cases, sweets fanatics and lovers of (most) things baked Charlotte Druckman and Gabriella Gershenson (of Every Day with Rachael Ray) share a favorite confection, slice of cake, ice cream scoop, or other delectable delight worth the sugar high—and the trek. In this week's edition, the dinner-skipping twosome goes to Empellón Cocina, where they sample pastry-chef-extraordinaire-turned-Mexican-restaurateur Alex Stupak's new five-course, $45 dessert tasting menu. 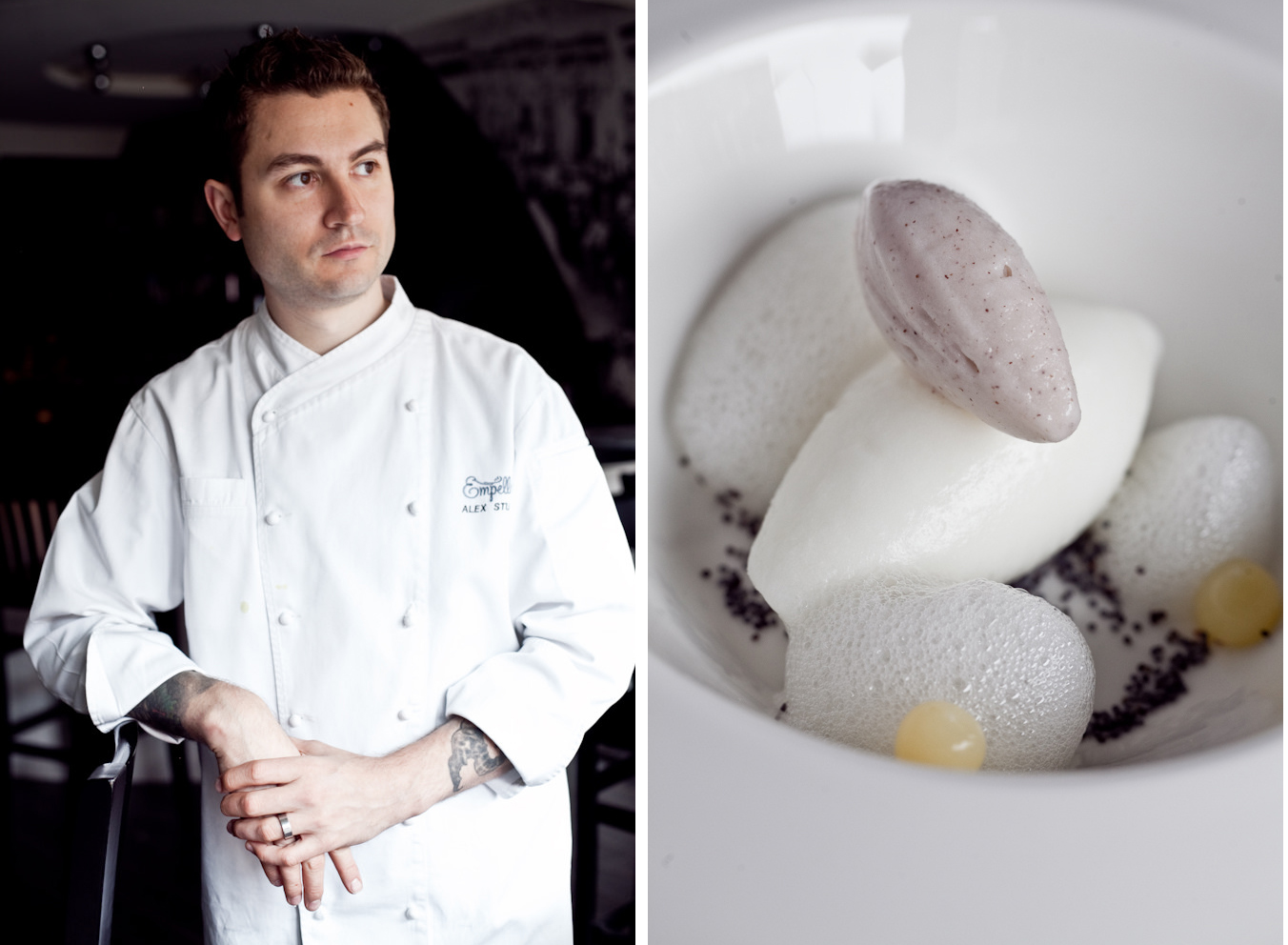 [Going back to his pastry roots, chef and restaurateur Alex Stupak has launched a dessert tasting menu at Empellón Cocina; It starts with a lemon-poppyseed amuse. All photos by Paul Crispin Quitoriano.]
GG: This is a big one. We are talking about Alex Stupak's dessert tasting menu, new at Empellón Cocina. His background is very fine experimental pastry. He came to New York to be the pastry chef at wd~50 via Alinea. When he left to start Empellón, he became a chef-entrepreneur and pastry was no longer his main gig. I think New York dining lost something special when that happened. How would you describe his pastry prowess, Char?

CD: I guess you'd have to use the word "artist," even if it's a slippery one when we're talking about chefs. His technical ability is off the charts, but he also has a vision. I am constantly amazed by what he achieves texturally and how he challenges my palate.

GG: And his stuff is delicious too, which often gets lost among those other skills.

GG: I think it's stoopid delicious!

CD: You love yourself some poppy seeds, and that was my favorite thing about the dish—the sorbet, and the seeds on the bottom of the plate. The lemon was too perfumey for my taste.

GG: Agreed. There was a meyer lemon foam situation that really wasn't doing it for me. I'm not a fan of foam. It's like saliva on a plate. I would have loved just the scoop of poppy on its own. 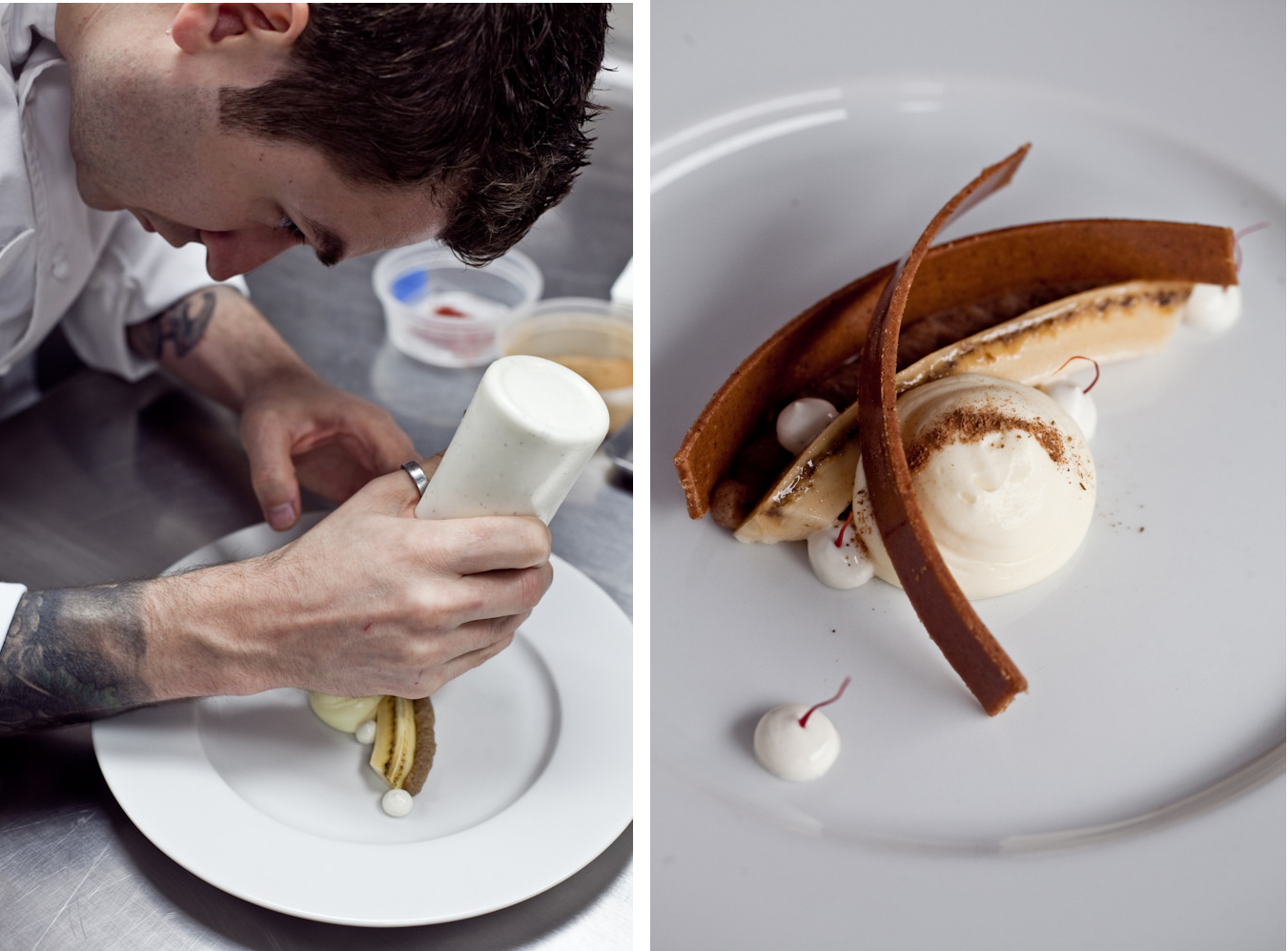 [Raw banana anchors the Jasmine Pastry Cream dish; The finished composition, cinnamon sablés and all.]
CD: That was just the AMUSE. The official first course was called Jasmine Pastry Cream, but it included a raw banana and then the centerpiece, this jasmine tea-flavored pastry cream that reminded me of marshmallow fluff, texturally. There was yogurt flavored with Earl Grey, too, that tasted like cream cheese frosting. Then those slender cinnamon sablé arcs that were barely sweet and had such a delicate yet gritty crumb.

GG: You're right on about the cream cheese frosting. The dish was two things at once—recognizable and totally new. It was like the best overripe banana bread. And the floral jasmine picked up and carried the flavor of the exquisite rot. It was so earthy and ethereal too.

CD: After all the other flavors vanished, I got a remarkable wave of Earl Grey followed by another of jasmine, so lovely and subdued.

GG: Next, well, you should introduce this one because you were dreading it 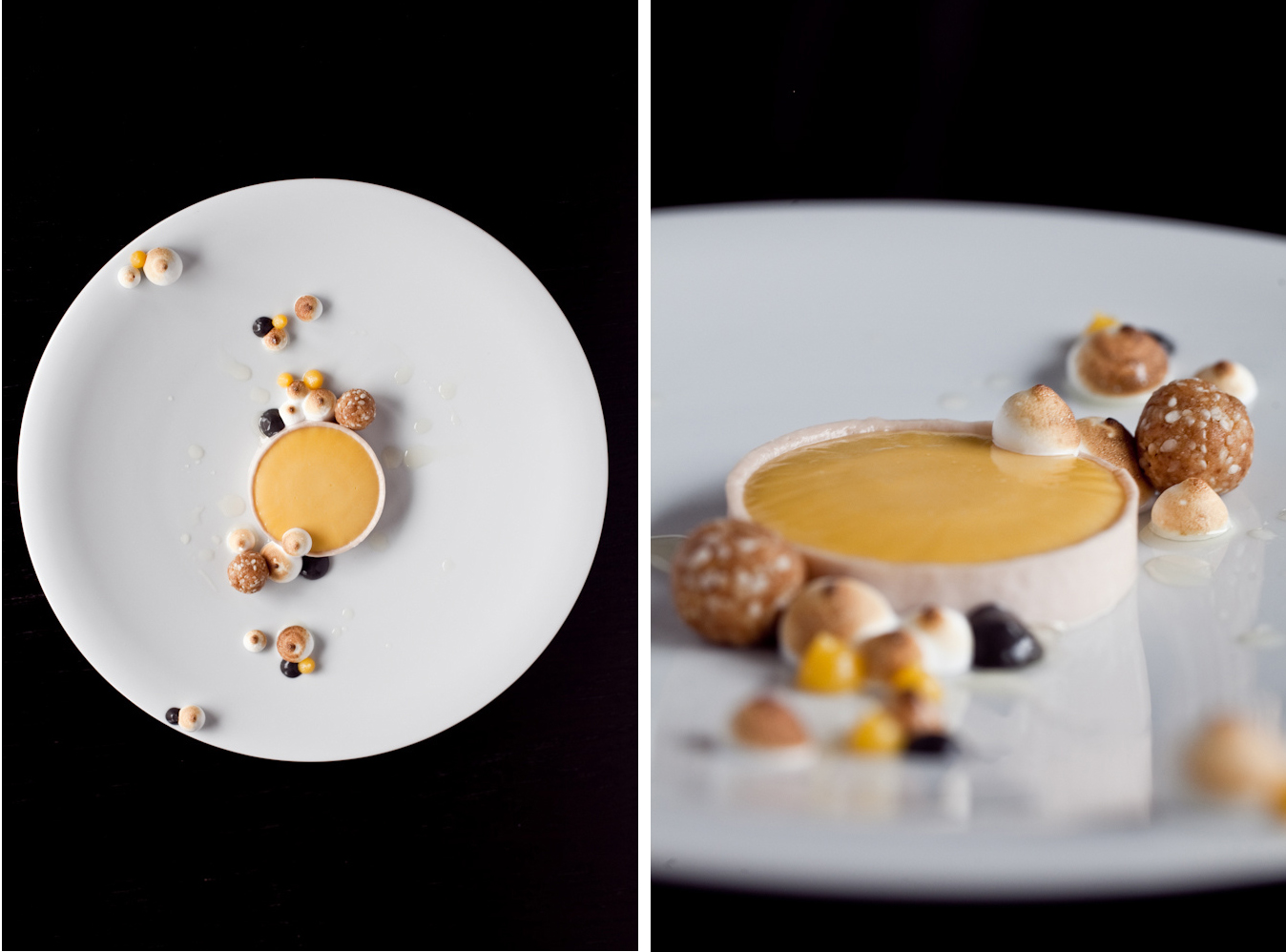 [This passion fruit tart may be "false," but it sure is purdy.]
CD: I HATE PASSION FRUIT. This "false" passion fruit tart did not sway my vote. I liked everything in the dish except for the tart, which was the focal point of the plate.

GG: The tart was a passion fruit curd in a false tahini crust, which was not a crust at all but a shell made out of tahini cream. And there were little dots of toasted meringue, and passion fruit gel and black sesame sauce, too.

CD: There were also those balls of sesame crumbs that, when eaten with the curd, gave you the impression of crust. When you stuck your spoon into the curd, the tahini collapsed and became a thick sauce, and then you got the crumbs and the meringue. It was like having a passion fruit meringue pie. I only wish it were a LEMON meringue pie.

GG: See, I love the pungency of passion fruit. What struck me with this dessert was, again, the mastery with seemingly disparate flavors—a balance of tart fruit and nuttiness. How do you feel about dishes with all these little smears and dots and balls? I generally crave something simpler. 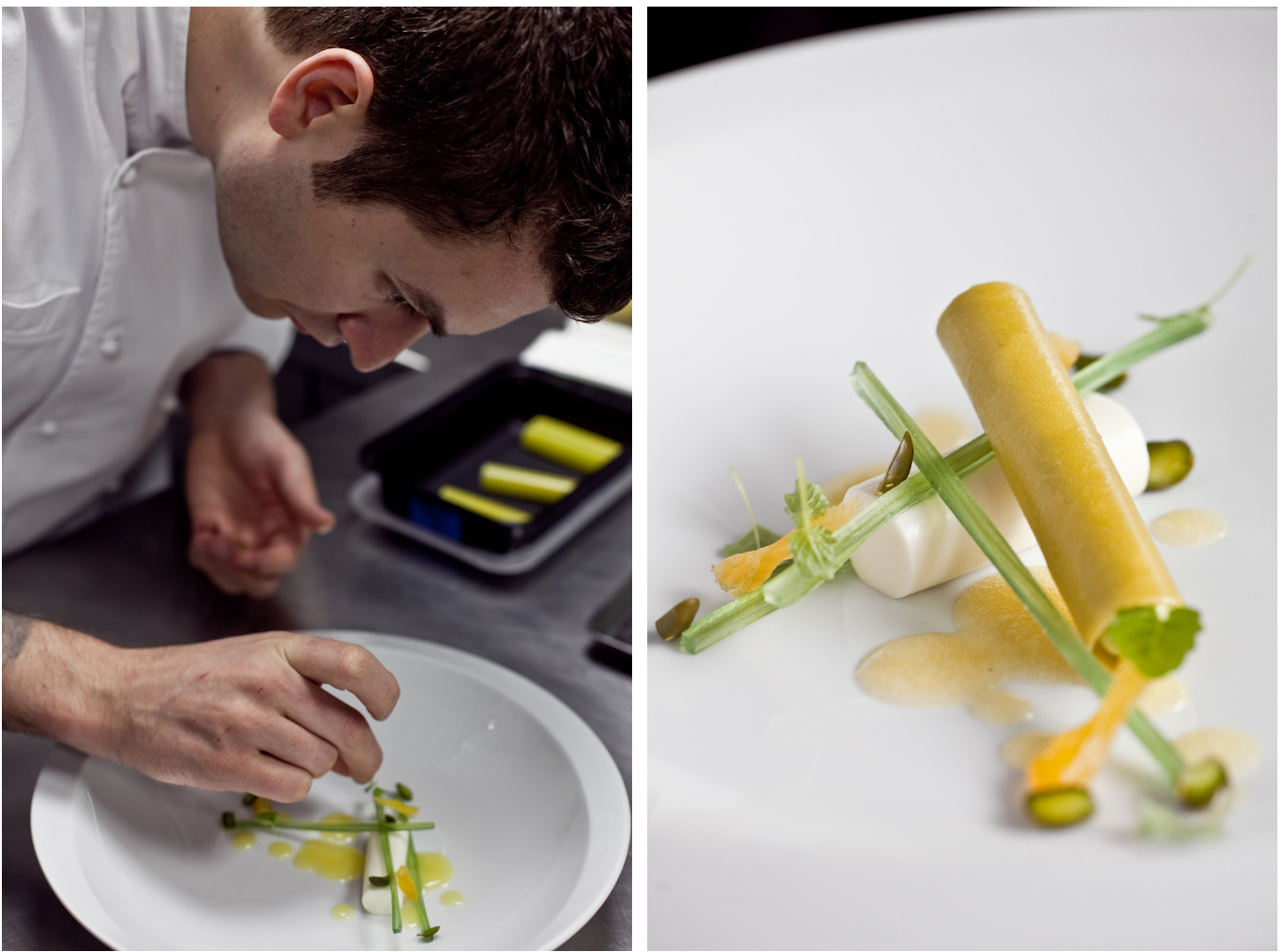 [Stupak maintains a delicate balance while plating the his Pistachio Ice Cream course; The totally tubular result contains a lot more than pistachios and ice cream.]

CD: Alex does it in a way that works, because he shows you, visually, how to take a bite. He clusters each of those elements near enough to each other and spaces them out really well so you know exactly where to drag your spoon. For me, it was the NEXT dish that didn't cohere. It featured a pistachio tuile in that tradition of Stupak tubes, where as soon as you crack into the shell, the crunchy texture gives way to a soft center, a pistachio ice cream.

GG: What were those funny stalks of green vegetal business?

CD: Angelica stems! I loved those, but not as part of the whole. They had a sort of lemongrass-ish flavor that mellowed out to something more green and earthy. They were balanced on the pistachio tube, which rested on yet another tube made of a thickened chartreuse mousse.

GG: Again, I just wanted that shiny pistachio ice cream tube on its own, to pick it up and eat it with my fingers.

CD: There was too much going on there—pineapple, too, and then hydrated pistachios.

GG: It was hard to know what to make of it. But the next course was pure comfort. This was like the be-all and end-all of New York crumb cakes.

CD: OMG. It was a coffee cake in every sense, and a warm, just-baked one. It reminded me of Italian sbrisolona—a crumbly torte-cookie hybrid—because it had a layer of streusel on top as thick as the cake itself. Then, Alex poured that soup over it; it was like a cake sundae without the ice cream.

GG: It was like eating a cake that you're not supposed to cut into until it's cooled, but you just can't wait any longer and just paw your way through it while it's still warm and steaming. It felt like every crumb was drenched in butter. 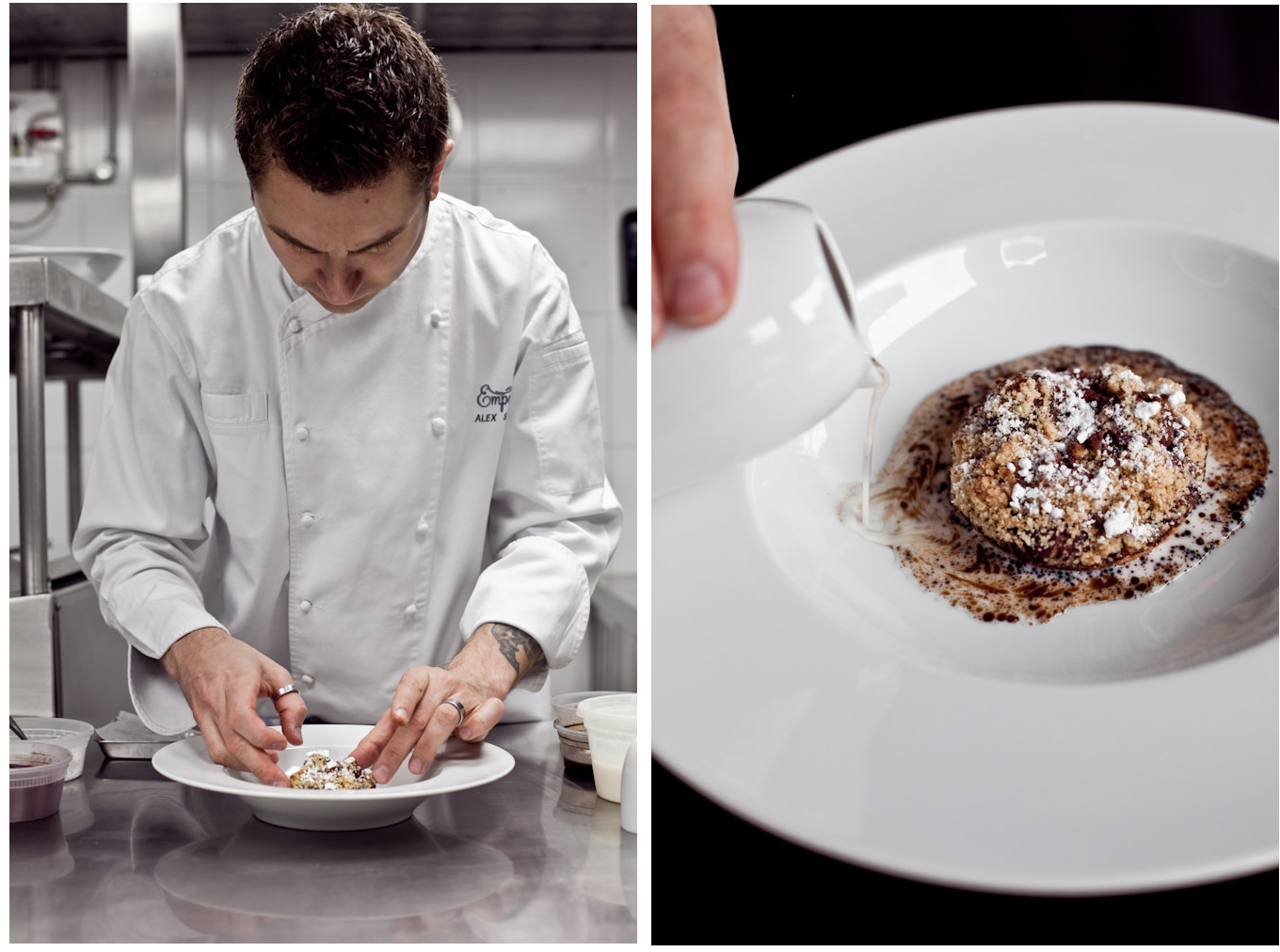 [Two balls of dried cherry paste are sunk into the coffee cake batter; Stupak pours a goat's milk soup made with condensed milk, maraschino liqueur, olive oil and espresso around the cake.]

CD: The raw goat's milk in that soup was inspired. He added olive oil with espresso and, to pick up the cherry paste in the cake, maraschino liqueur. It blended with the milk chocolate and carob molasses ganache hidden beneath the cake. The way those flavors played off each other was The Bomb exploding in my mouth.

GG: It was like having a cup of coffee with your coffee cake. It was so playful.

CD: Which brings me to one of the most genius maneuvers of the night. Usually, we expect the chocolate dessert to be the ultimate, the most decadent. The last course here was chocolate, but it was muted. 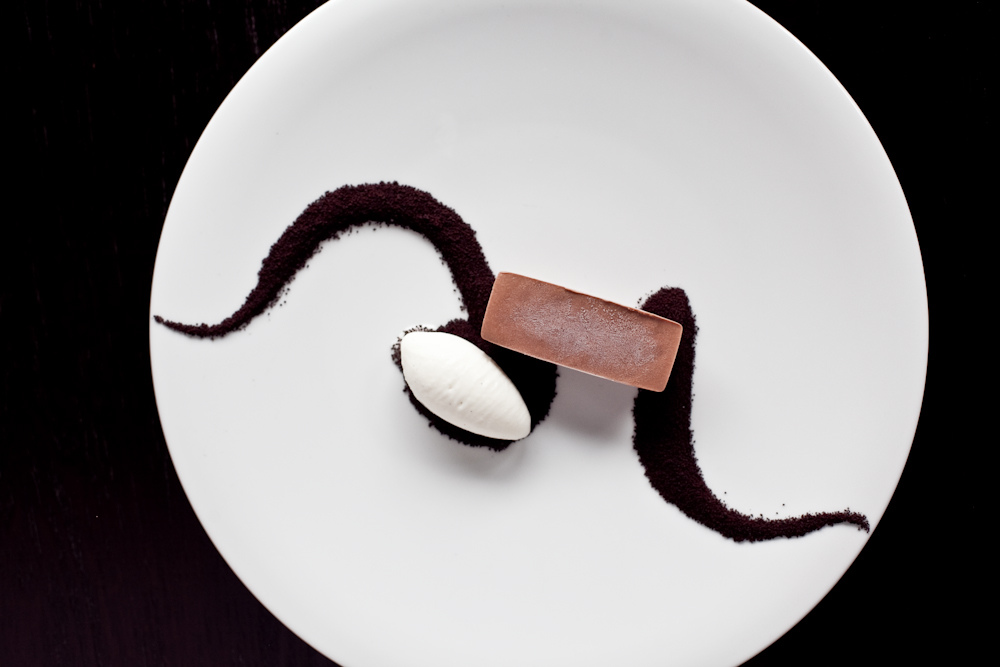 [The final course is a quiet study in chocolate.]

GG: It was like being brought back to planet Earth after visiting Stupak's intergalactic galaxy of overachieving boundary pushing exquisitude.

CD: I think it was meant to work as a digestive in a way. For a chocolate dessert to be that? BRILLIANT.

GG: It was a light and loose chocolate milk ganache with vanilla ice cream

CD: And it had a little road of dark chocolate crumbs on it, like the road he took us on!

CD: Yeah, the trail of Cookiepuss crumbs. And how is it we didn't finish feeling like we'd been food fucked?

GG: Because we didn't eat dinner.

· All Coverage of Pastry Cases [~ENY~]