Could the bar make a fresh lemonade?

"No, but we have orange soda," my waiter replied, and I briefly thought about asking whether they had a Doritos Loco taco to go with that. Instead, I ordered one of New York's most expensive burritos at $14. 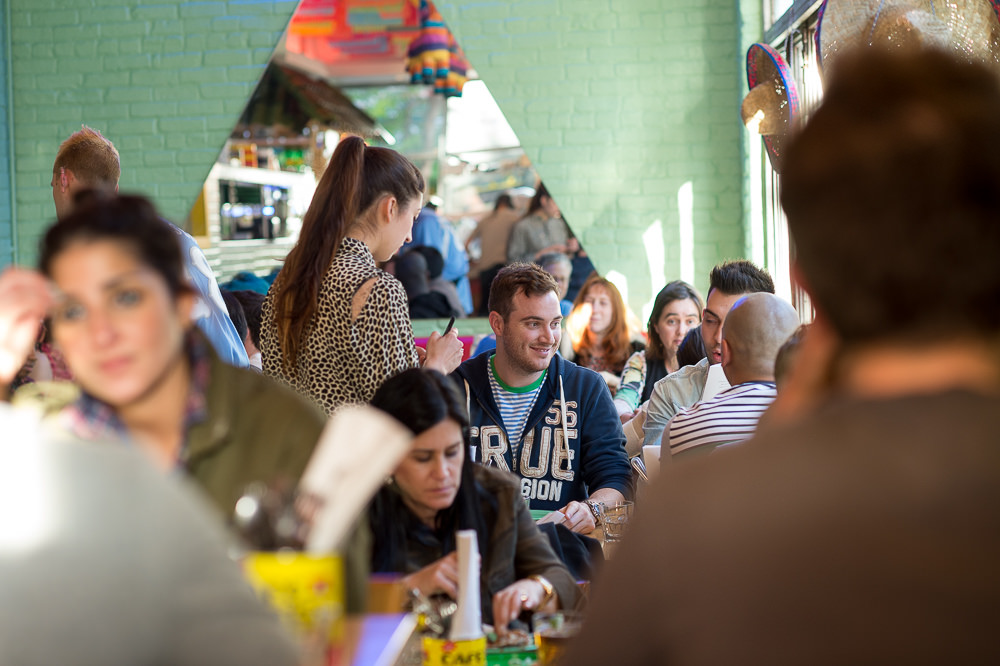 So yeah. That's Cantina in a nutshell. It's all the work of Danny Bowien, a 32 year-old chef born in South Korea, raised in the Midwest and exalted by the U.S. culinary community for Mission Chinese, his affordable duo of late night spots in San Francisco and New York (the latter is currently a pop-up in Carroll Gardens). The great thing about that concept is that it takes a fairly static cuisine — Chinese-American take-out fare — and upends it, spiking Chongqing chicken wings with an unexpected dose of sugar, or infusing the tingly flavors of mapo tofu into a tonkatsu ramen broth. And it's all shockingly tasty.

Mission Cantina deserves credit for freeing Mexican fare from the handcuffs of tradition and the false perception of being cheap.

Mission Cantina, just the same, deserves credit for helping to free Mexican fare from the handcuffs of tradition and the false perception of being cheap. That means Bowien stuffs some of his pricey burritos with French fries. He coats tostadas with chicken liver and salmon skin for an iron-y, oily body slam. And then he sells tacos that range from very good to very average. Yep. That's the bad news. Cantina's 40-item menu is still a volatile work in progress, with more misses than there should be at a six month-old restaurant. 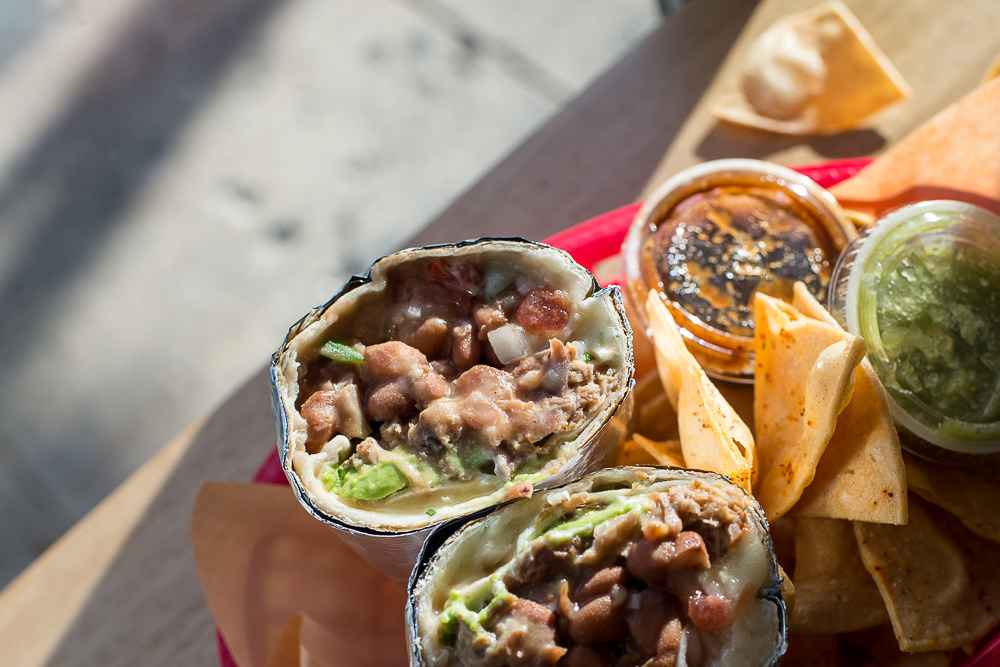 The burritos are not one of those misses. They're impressive, even for a critic like this one who normally looks upon that creation with the same disdain as its culinary cousin, the wrap. The key at Cantina is that the burritos come sans rice. That means the interior is more of a soft stew of nourishing deliciousness than a starchy brick. Some bites burst of beans and soft, pulled pork. Other bites pop with cilantro, avocado, onions, and scallions. It is a fine seven-layer dip rolled up into a soft flour tortilla, and after tax and tip it'll cost you over $18. It packs enough food to qualify as a large format dish, so eat half now and save the rest for later if you want to walk away from this one with no serious injuries.

Bowien, who walks and talks with the ease of a West Coast surfer, deserves props for mining the depths of American fast food to inform (some of) his fare. "I grew up in Oklahoma and ate a lot of Taco Bell growing up," Bowien told me during a phone interview, adding that the Tex-Mex chain was his "first exposure to real Mexican food." My response: "same here."

In fact I'll go even further. Taco Bell was a vital part my coming of age as a teenager; I once held my own in the drive-through lane on a mountain bike, with a menacing SUV behind me. It was a proud day for me and a quiet victory for cyclists craving FourthMeal. So my heart swelled when I learned Cantina was riffing on Taco Bell's famous double decker — a recent addition. "I didn't want to come out of the gate with a pseudo-trashy dish," Bowien said. 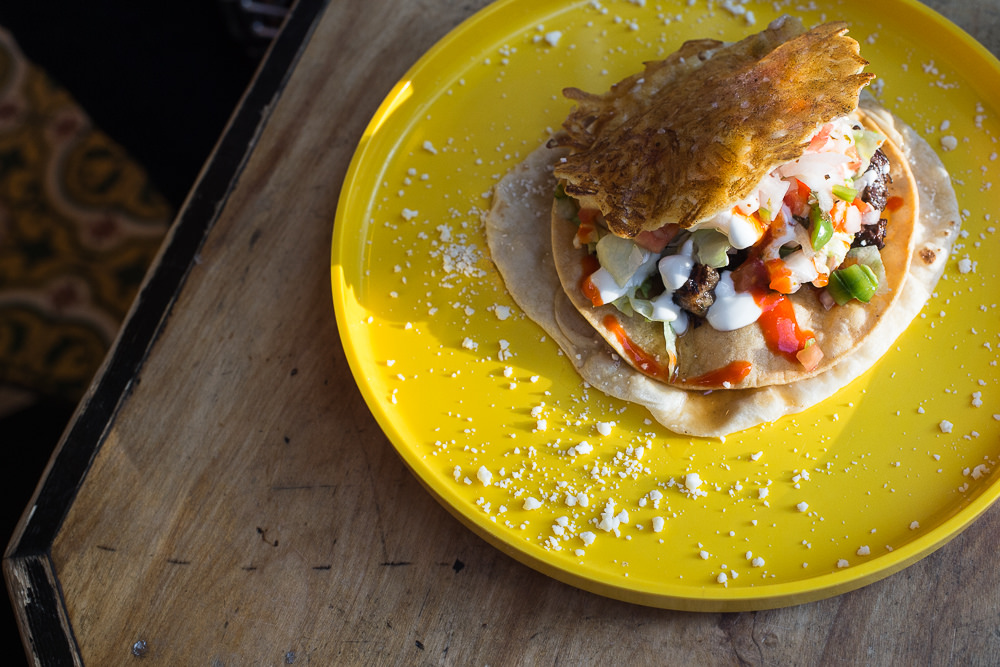 He covers a soft flour tortilla with a layer of refried beans, tops that with a corn tortilla, throws in some grilled skirt steak, jowl bacon, tomatoes, iceberg lettuce, hot sauce and a crisped layer of cheddar. Sounds good, right? Problem is, it lacks the textural brilliance and structural integrity of the fast food original. If Taco Bell's version is a tender meat and bean mille-feuille, imparting legumes, crunch, and 88 percent ground beef with every bite, Mission Cantina's double decker requires fork and knife action before picking it up. And then you find yourself taking bits of grisly steak out of your mouth and give up. Cost: $8.50. 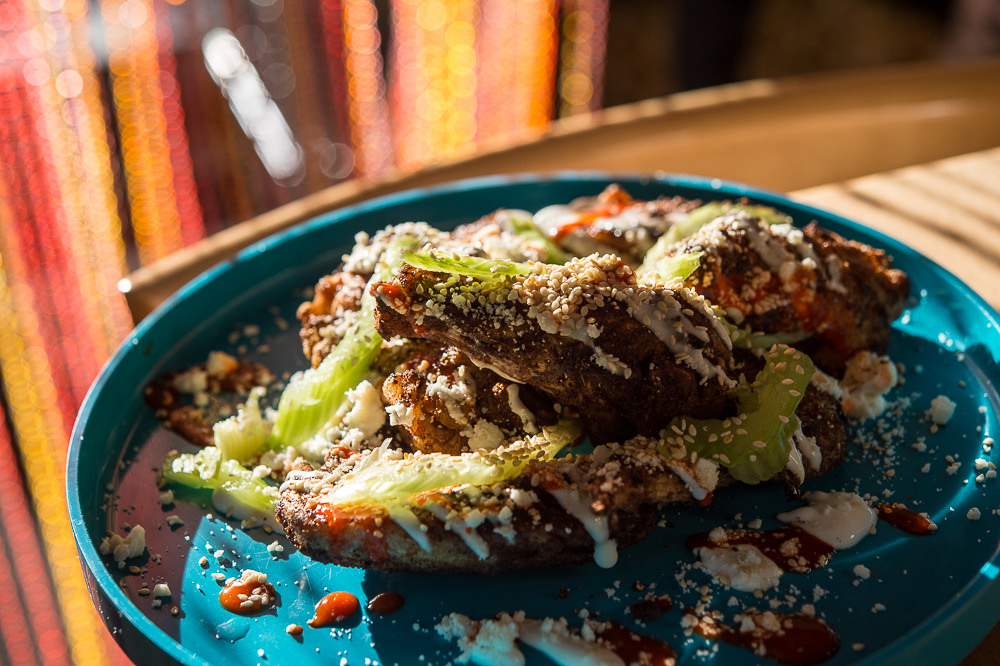 Snack on spicy cucumbers instead ($6), drenched in a cooling cashew cream. Follow up with fried chicken wings ($12.50), slathered in a gently fiery mole whose chocolatey, nutty richness goes on and on. Finish off with a $40 fried rabbit that's salty, crispy, chewy and paired with a house-made hot sauce that ranks with Frank's for its addictive, vinegary punch.

This is strongly flavored fare that calls for the zing of margaritas. Too bad a myopic, Prohibition-era community board rejected Cantina's proposal for a full liquor license, an occurrence that's so common in contemporary New York I often joke that if Jesus Christ himself descended from the heavens and turned water into wine, his Big Apple neighbors would brand him a bootlegger.

This strongly flavored fare calls for the zing of margaritas. Too bad they're made with sochu.

So for now, there are sochu margaritas, which taste like sweetened water flavored with lime cordial. No thanks. Just as bad is the wine service, with lousy reds served as warm as some of the food, and with most selections poured into clunky tumblers filled to the brim. So forget about swirling your $13 Loire Valley sauvignon blanc.

Sake or beer will get the job done for now — Chili Devil brew comes with a pepper in the bottle and a fun kick of vinegar, while Southern Tier's Live pale ale packs the hops to deal with fattier menu items like the $35 Peking-style pork belly, essentially a giant chicharrón that happens to have some succulent meat attached to it. It's awesome.

What's not awesome are the menu's regular chicharrónes ($7). In the opening days of Cantina they almost seemed to crackle like Pop Rocks. Now they're painted with leaden pimento cheese, killing the delicate flavor and texture of the rind. Too bad. Also no good: A forgettable octopus tostada, fry bread topped with fresh cheese and vegetables (imagine a pizza minus salt and acid), and masa porridge with collards that taste like they came out of a can. 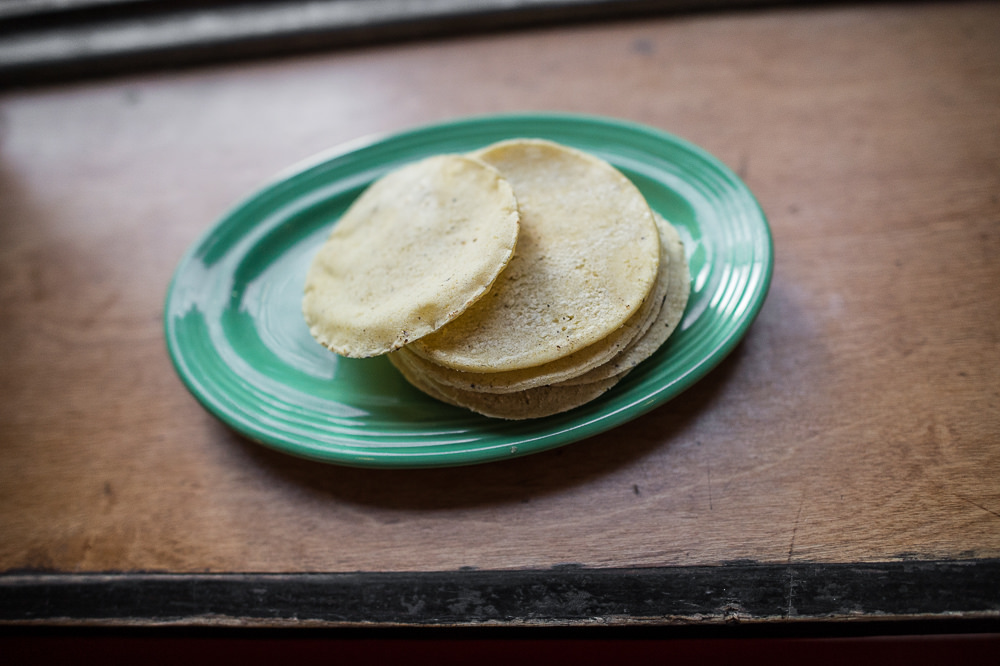 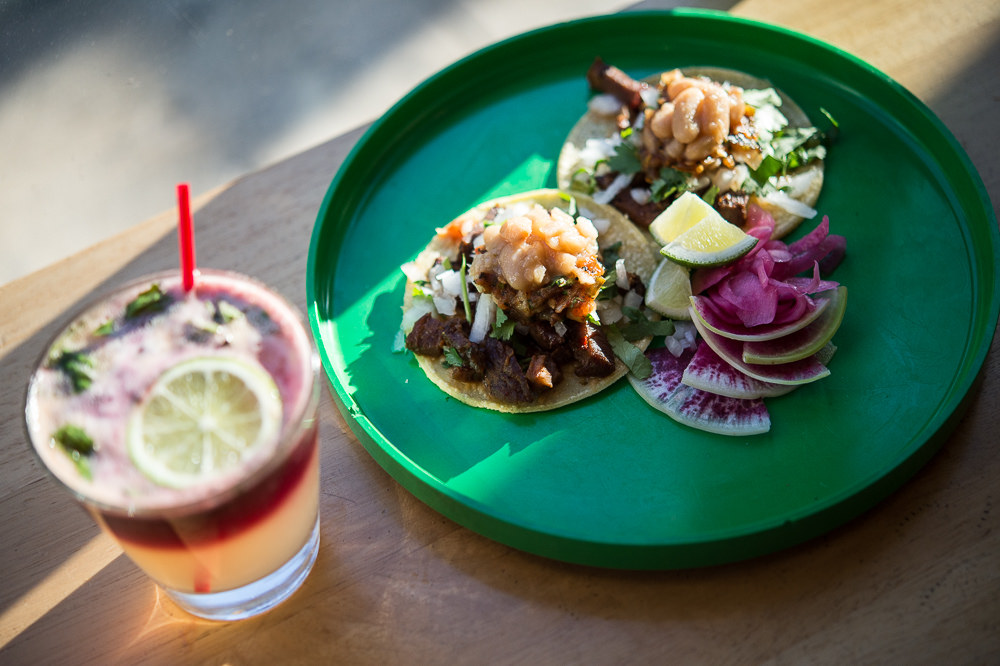 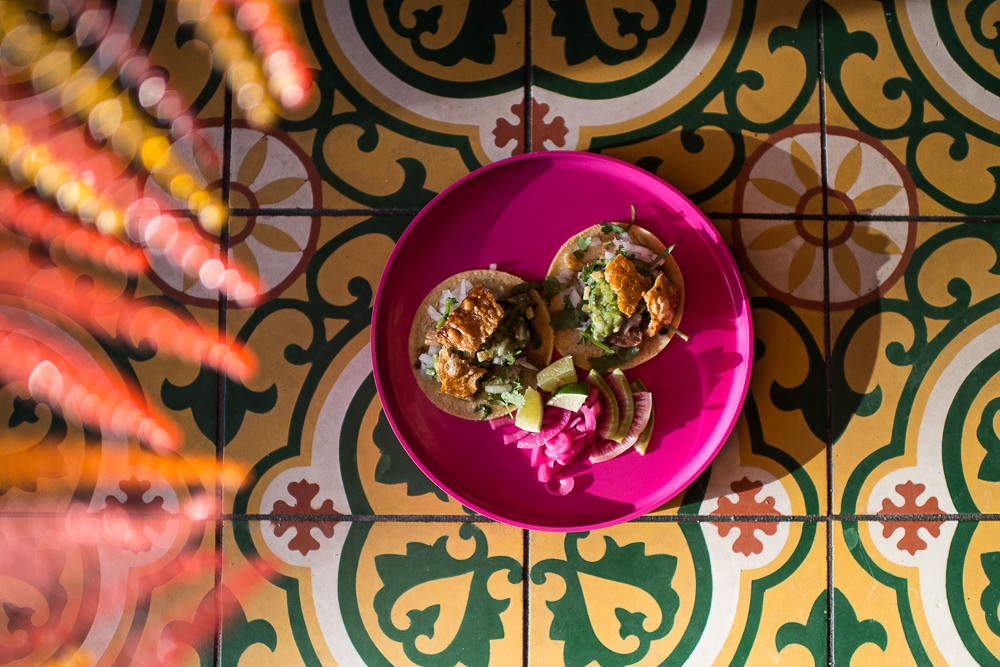 And then there are the tacos ($6-$7), two to an order and about three bites each. The tortillas are (partially) made with an expensive brand of hominy called Anson Mills, so when they're good, they're great — vaguely sweet, and somehow light enough to dissolve in the mouth with little more resistance than a modernist foam. Some of the tacos come filled with lard-cooked brisket, sporting an intense umami roundness, or crispy bits of chewy pork, perfumed with cilantro. Others pack catfish so bland it's almost impossible to discern they contain any protein at all. And (overcooked) lamb tacos are so intensely seasoned with cumin and spices it's tough to discern any proper lamb flavor.

The key is to eat them all immediately, as the tortillas grow soggy quickly. Unfortunately the kitchen sends out your (separate) orders of tacos at once, so by the time you pick up the third or fourth specimen, it nearly falls apart. "Slow it down" a trio next to us told the waiter, and minutes later, a runner was bringing over more tacos, even though there wasn't an inch of space on their table.

But here's a bigger problem: House-made flour tortillas, soft, sweet and toothsome as part of the burritos, are decidedly awful when grilled; they once arrived so arid I'm surprised they didn't turn into breadcrumbs when folded. They tasted of raw flour and threatened to ruin the lovely Peking pork and uni butter they came with. SELL. 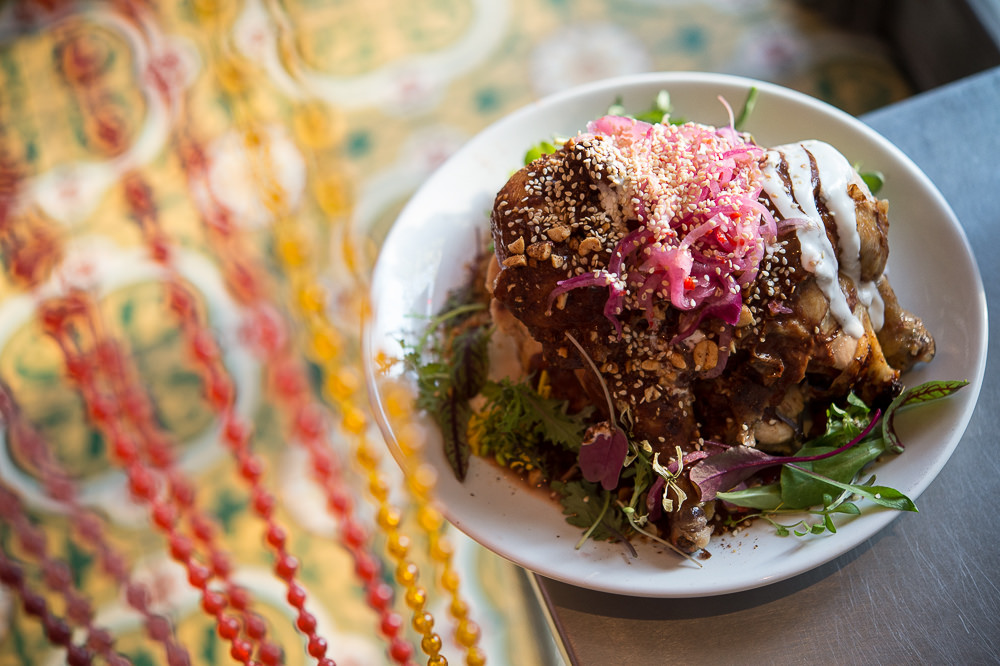 Cantina offers no coffee or dessert; the goal is to get you in and out, and the result is that you'll rarely wait more than an hour to sit down. Half a rotisserie chicken ($22) is the right way to end your meal here. Wipe off the dense mole that covers the bird and dig into the fall-apart flesh; the meat bursts with a gloriously head-spinning flavor. Gorgeous stuff.

On a final visit, Bowien himself came over to my table, with his newborn son strapped to his chest, and gave me a single tortilla chip. It was spicy, and vaguely cheese-y. "It's supposed to taste like a Dorito." he said. Right on.

Maybe I will get that Loco taco one day.

Our review of Mission Cantina

Cost
Under $50 per person.
Sample dishes
Spicy cucumbers, chicken wings, tongue tacos, carnitas tacos, brisket tacos.
What to drink
Beer. For those who do order wine, a fizzy Lambrusco or one of two German rieslings are the way to go. Be sure to ask for a pre-purchase taste and to inspect the bottle, as servers brought the wrong wine more than once.
Bonus tip
Burritos, fried rabbit and other items available for delivery via Caviar.