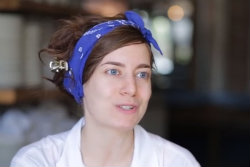 1) Sara(h)s Kramer and Hymanson:
The free-agent back of house duo, formerly of Glasserie, stopped by The Morning After, where they talked about their City Grit event this week. Here's Kramer on whether or not seasonal vegetables should be considered "trends":

I think that the trend thing is also really perpetuated by the media, whereas I think that people are using a lot of seasonal products. The reason that people have a brussels sprout dish on is because they're available. And that's maybe a little bit generous, because I think people also use brussels sprouts when they're not available, but I think that the 'trends' may not be so much about what the ingredient is, so much as what the media says the trend is. 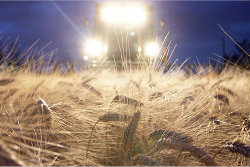 2) NY State Agriculture, Local Grains and Beer:
June Russell of GrowNYC and Greenmarket stopped by this week's episode of Beer Sessions to join a discussion on the role of local agriculture in local beer. Here's Russell on the Greenmarket push to get local farmers growing grains and how beer plays a role in that effort:

At GrowNYC and Greenmarket we've been working to try and get local grains in production for quite a while now…Originally that was working with bakers trying to find local flour. But it order to get local grains back into the region we needed to get all possible buyers, so in 2009 we really brainstormed about what are all the grains we could be growing that would give our farmers viable products that they could grow on their farms and what would their culinary applications be, and of course beer would be one of them. 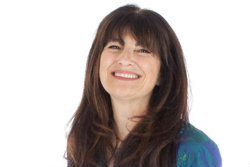 3) Ruth Reichl's novel Delicious!
Former NYT Critic Ruth Reichl stopped by Mitchell Davis' show this week to chat about her upcoming novel Delicious! The pair discuss the many parallels between the novel and Reichl's own writing career in NYC, and Reichl shares her thoughts on the culinary culture in the US today:

I've always felt that we were backward, and now, people say it's too much, and I think, not at all, we're now getting to the place where any mature culture should be, where food is central to what people think about. 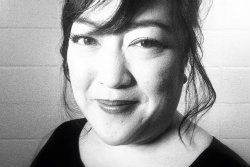 4) Bubble-Educator Belinda Chang:
Formerly of Monkey Bar and The Modern, Belinda Chang is now the Champagne Educator for the bubble behemoth Moet Hennessey USA. She stopped by Michael Harlan Turkell's show The Food Seen to share her current educational endeavors: 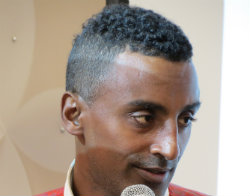 5) Marcuss Samuelsson on Chef's Story:
Dorothy Cann Hamilton of the International Culinary Center sat down with Marcus Samuelsson to talk about his education and upbringing and experience, and his career as chef, restauranteur, writer and fundraiser.

I wouldn't trade my experience for anything. It made me who I am. For every scar story I can tell you 10-15 camaraderie stories. There's a sense of love in the kitchen that you can't describe to people that aren't a part of our industry. That's why I stick up for my team.