Share All sharing options for: Michel Richard's Gallery Closes for the 'Summer Season'

Michel Richard, Washington D.C.'s most famous French chef, came to The New York Palace Hotel last October to open one of Manhattan's most expensive restaurants. Last week, that restaurant closed. The Gallery at Villard Michel Richard, which this critic drop kicked in a Bloomberg News review last December, has shuttered for the "summer season," according to the venue's website. When asked when The Gallery would re-open, a telephone reservationist replied, "We're not exactly sure."

Michel Richard has removed all menus from The Gallery's website and the restaurant's OpenTable page is not taking reservations for future dates. It is not uncommon for high-end restaurants to go on break for a week or two after Christmas or in late August. A full seasonal shutter, however, is decidedly more rare.

Richard's less expensive bistro at The New York Palace Hotel, which Pete Wells of the New York Times described as an "awful hotel restaurant" in his zero-star review, and where I had a plate of seafood pasta so leaden it made me question my chosen career path as a critic, remains open.

None of this should come as a shock, as The Gallery's summer closure follows a number of efforts to drum up business. The restaurant dropped its priciest tasting menu earlier this year, instituted a policy to give away "free" bottles of Dom Perignon to tables of four, and issued grants of 1,000 OpenTable points to those who dined at The Gallery virtually any day of the week and at virtually any time.

Good restaurants, of course, shouldn't have to offer free Champagne to drum up business, and Groupon-esque gimmicks couldn't fix The Gallery's more serious problems, such as the food, which wasn't very good, and the prices, which were extraordinary. The standard four-course dinner menu was $150, a higher starting price than at the three Michelin-starred Le Bernardin or Jean-Georges.

Many of the dishes, such as the creative (and delicious) caviar penguins, were replicas of those that Richard served at Citronelle, his Georgetown restaurant that closed following water damages in 2012. But Washington Post Critic Tom Sietsema wrote that "fans of the four-star Citronelle are likely to be disappointed by what they find in the Gallery, which lacks the whimsy that's long been a signature of Richard's cooking." He also recounted how waiters "go through the motions of taking orders and depositing dishes in joyless fashion." 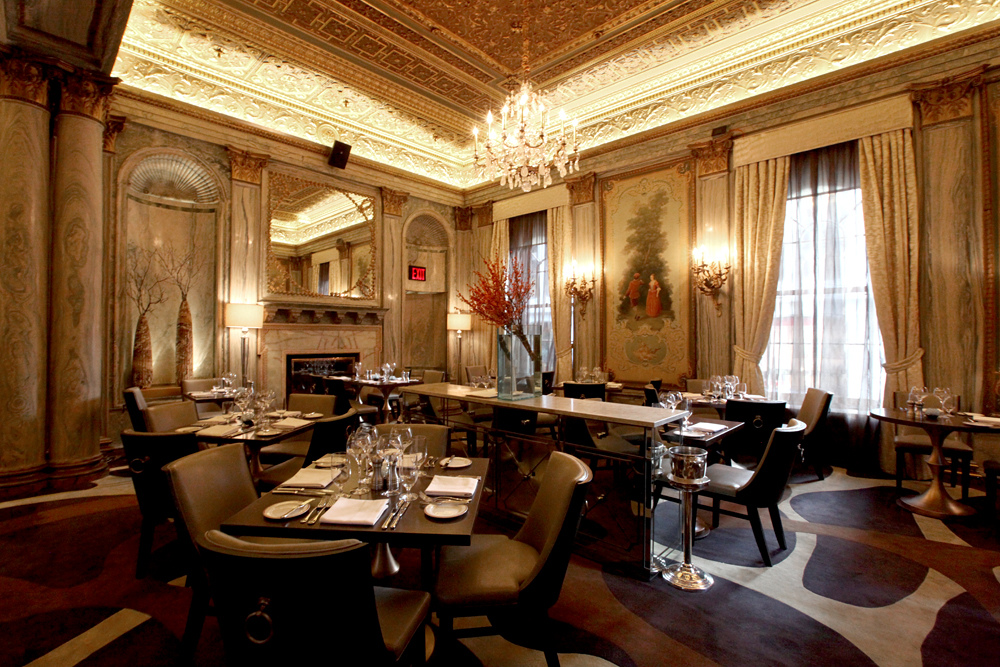 Those are tough words for a meal that Sietsema said cost $600. And I had tougher words after having encountered a "lobster beluga" dish that contained not caviar but rather squid-ink colored Israeli couscous with "the gluey texture and bland flavor of a wartime MRE," as I wrote for Bloomberg. My meal for two cost $747.

The brilliant thing about a great tasting menu is that it helps you experience food that you might not have ordered as part of an a la carte selection; you give up a bit of choice and in return the tasting helps push you outside of your comfort zone. But during my single meal at The Gallery, I was suckered in by delicious sounding dishes and ended up in a gastronomic prison sentence, without an ability to cut my losses halfway through the meal. It was a poor way to introduce New York diners to the supposedly great cooking of Michel Richard. It was a lesson in how a chef shouldn't expand his or her empire. It was fine dining at its worst, average food and limited choices at high prices, in a city that offers so much of the opposite. So for now, au revoir!
· All Villard Michel Richard News on Eater [~ENY~}