Has The Meat Hook Reinvented the Sandwich?

Share All sharing options for: Has The Meat Hook Reinvented the Sandwich?

Lately, the city's celebrity butchers have been fooling around with sandwiches and other meat-bearing prepared foods. It all started when Dickson Farmstand Meats in the Chelsea Market put one of those rolling hot dog contraptions in its window, and started concocting the chili con carne to go on top of it. New West Village butcher Hudson and Charles made sandwiches right out of the gate a few months ago, and now has a shifting roster that includes a meatball hero and a credible Cubano, possibly in response to the movie Chef. Now Williamsburg's Meat Hook, the mother of all celebrity butchers, has opened a free-standing sandwich shop a few blocks from the Lorimer stop on the L. But don't make the mistake I did and head downhill from the station, where the butcher shop resides on Frost Street — the sandwich shop is in the opposite direction.

Conveniently housed right next to a Gimme Coffee, the deep and narrow space might have once been a garage. Halfway back sits the order counter, and behind that a kitchen in which three employees were seen in the throes of sandwich preparation. In front of the counter find three raised metal tables with high backless stools, which could be a liability if you drink too many beers (Bud, $4; Modelo and Pacifico Clara, $5). A backlit menu board over the counter lists six sandwiches, while a printed menu offers seven, all priced at either $10 or $12. I visited on two consecutive afternoons (for now, the place is open 11 a.m. until 4 p.m., prime sandwich hours), and tried four sandwiches in all. 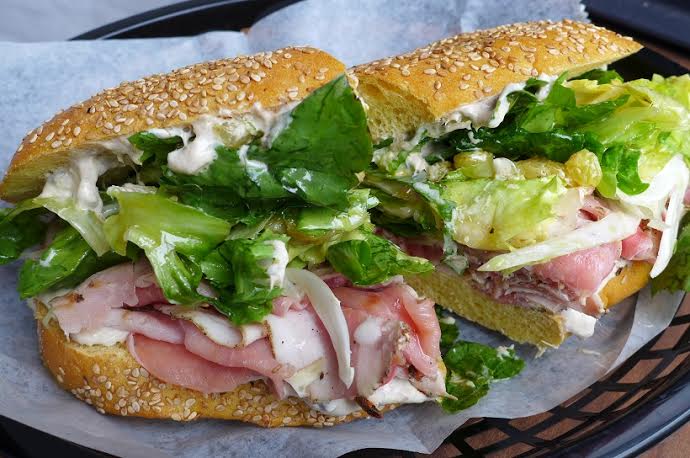 Roast Pork ($12) — This wildly inventive hero, first and foremost, gets the bread right, a sesame-seeded hero roll with a formidable bulk, moist crumb, and crust that won't drive you and your teeth nuts by being too hard. Sliced thin, the pink pork inside is high-quality and not overdone, and the sandwich features masses of greenery (the menu says escarole). Spicy yellow raisins add heat, while the most brilliant touch of all was, in lieu of mayo, the type of tonnato sauce used on veal in Italy's Piedmonte. It contains canned tuna, adding a salty fishiness to the sandwich. Brilliantly conceived, but perhaps a bit over-conceived if your objective is mainly eating masses of roast pork. 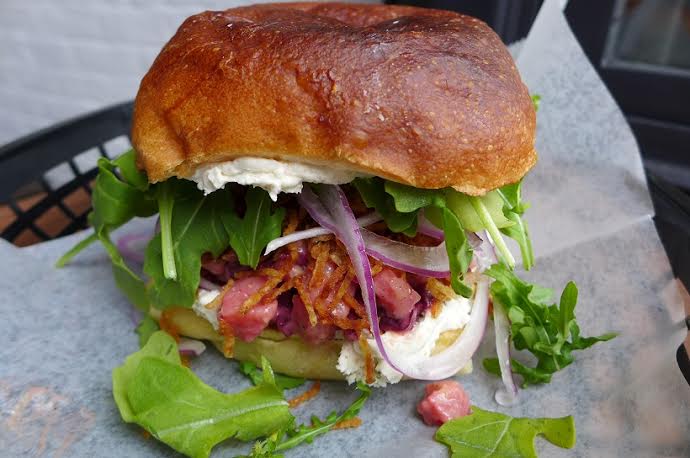 Cannibal Sandwich ($12) — No, this sandwich is not made with "long pig." It comes on a round potato roll something like a Mexican cemita, and contains good-sized chunks of raw eye of round sourced from an upstate farm. It might be considered something like a steak tartare sandwich, except tartare is chopped much finer. On the other hand, since it's usually served with toasts, steak tartare is halfway to being a sandwich already. Forgoing the piquancy of capers or other pickled substances, the Meat Hook cannibal lets the beef shine by backing it up with purple onions, bland ricotta, and bitter arugula. Not a bad combination, but it makes you wish the raw beef were sliced carpaccio-style, or seared slightly to bring out the flavor. 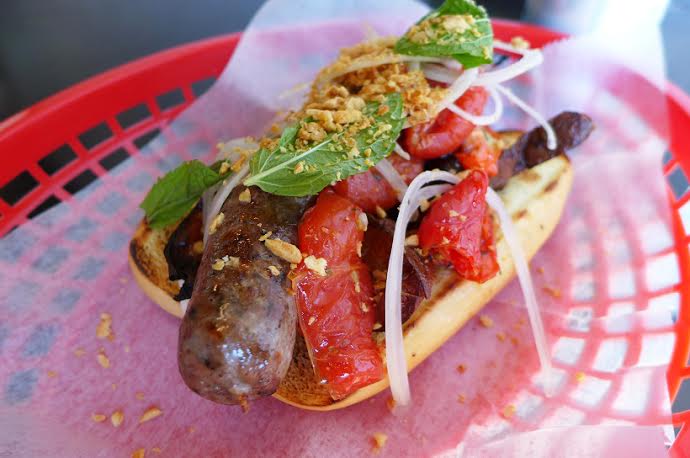 Gyro ($12) — This is perhaps the most outlandish of the MH Sandwich offerings, and it comes with an explanation that begins the minute your express interest. "It's not really a gyro, but a lamb sausage that tastes like a gyro," the counter guy intones, "and it's not in a pita, but in a normal hot dog bun." Indeed, the bun is the only thing normal about this tasty sandwich, which comes slathered with flavored yogurt and topped with pickled tomatoes, sweet white onions, toasted garlic, and something that looks like eggplant disks, but turns out to be white yam. Huh? The sandwich formulators get an A for creativity and effort, but here may be a little too much going on in this thing. 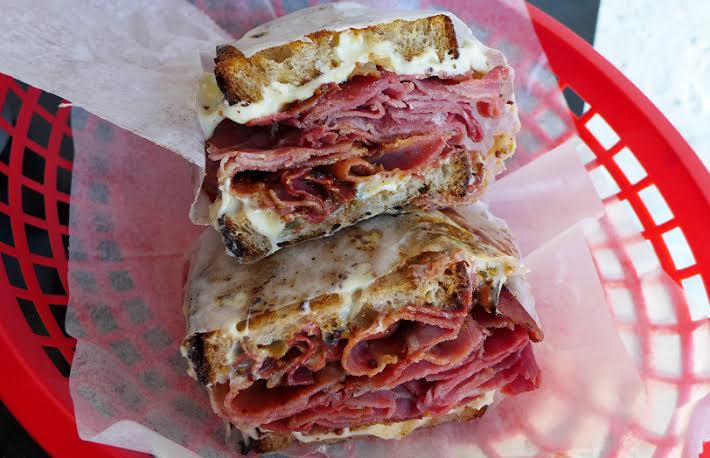 House Ham ($10) — If you're not into wrestling with your sandwich intellectually, while being probably also being pleased, flavor-wise, this modestly innovative contraption may be just what the culinarian ordered. While very good ham — sautéed a bit, I think, before being introduced to the bread — is the center of attention, this sandwich is really a species of toasted cheese — and a very good one. The cheese is unfussy American, which dairy-izes what might be a relentlessly meaty experience, and the sourdough bread comes nicely toasted but not unyielding. I love this sandwich, but then I love the roast pork (above), too.