"I believe that Japan and Italy have a great deal in common," chef Chris Jaeckle tells me and he proves that ballsy assertion by making delicious food at a restaurant called All'onda.

He goes on: "The roots of these cuisines take food and manipulate very little. It is based on good ingredients cooked simply. They are almost entirely surrounded by water and have mountainous regions, etc." It's enough to make me wonder what kind of wonderful and wacky pasta this guy will toss if he ever visits Iceland or Madagascar. In the meantime Jaeckle gives us parmesan dashi with tomato oil and ricotta dumplings. There's your tortellini en brodo, baby.

The broth is nutty while the tomato is just strong enough to let you know it's there. The hot soup has the same roundness as anything made with meat or MSG and the pasta's eggy filling has the density of a good American custard. If a hip spot on the Lower East Side like Ivan Ramen put it on the menu it would sell out in an hour, because it's obscenely delicious and it's probably something a stoner would crave after hitting the bong a few times — "Cheese Soup With Cheese Pudding Dumplings!" 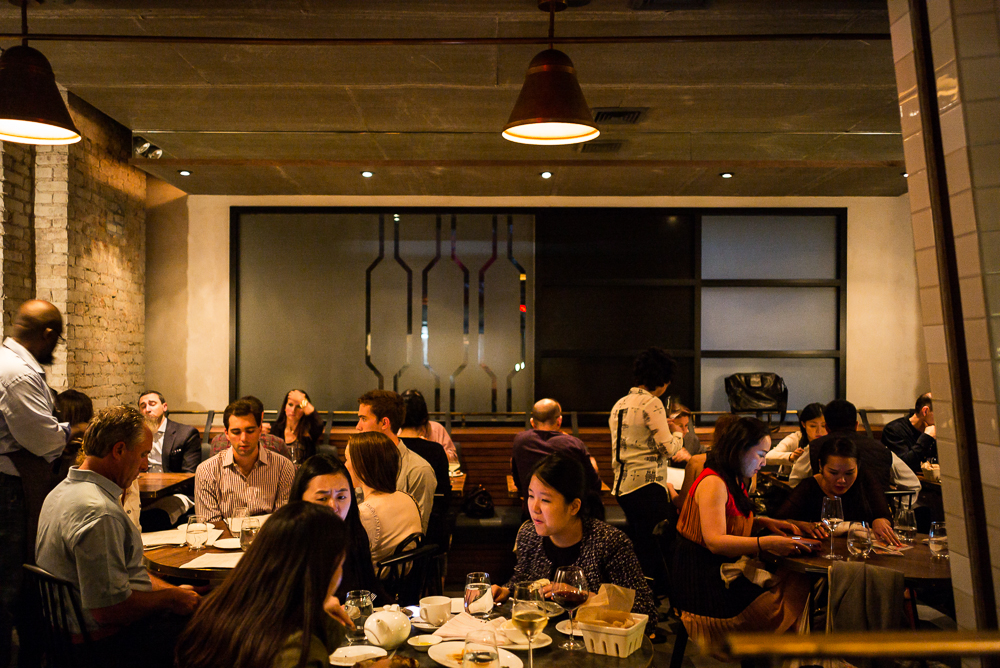 Alas, I regret to inform you that Jaeckle, late of Ai Fiori, took it off the menu.
As packed as All'onda gets on any given night, no one was ordering the parm dashi, I'm told. Such are the risks of doing something different, especially in this normcore era of eating out where mid-level continental restaurants and steakhouses are cloning themselves at such a rapid pace that Hollywood's recycling of the Spiderman franchise feels slow by comparison.

Italian spots continue to thrive, for the most part, in their more rustic or ethnic incarnations.

"Very few people are willing to step outside of the common Italian box and I never really understood why," says Jaeckle. He's right. As New York's high-end French and American venues play around with modernist techniques and international ingredients, our Italian spots continue to thrive, for the most part, in their more rustic or ethnic incarnations. And when things do get fancy, it's typically in more of a conservative, buttoned-up way, like at the excellent Del Posto or Marea.

Of course, we're slowly getting more open-minded about things. The Major Food Group is doing pretty well for itself spinning old-school red sauce fare into kick-ass tasting menus (and spendy raw fish bars) at Torrisi and ZZ's. Chris Cipollone is moving the conversation forward at Piora, tipping his Italian hat towards South Korea with his gochujang octopus. And now we have All'onda, where Jaeckle re-textures polenta into vegetarian "pork rinds" — meant for scooping up meaty shards of baccala — and where he treats bonito flakes as if they were truffles, shaving them over veal glazed sweetbreads, imparting a whisper of tonatto savoriness to the vitello.

Jaeckle, who's a partner at All'Onda with Jeffrey Chodorow's son Zach, calls this "Modern Venetian cuisine." That's probably a smart move; you don't see Jean-Georges Vongerichten or Cesar Ramirez referring to their three-Michelin-starred flagships as Asian-inclined French spots on their websites. Anything that smells of fusion can clear a room. 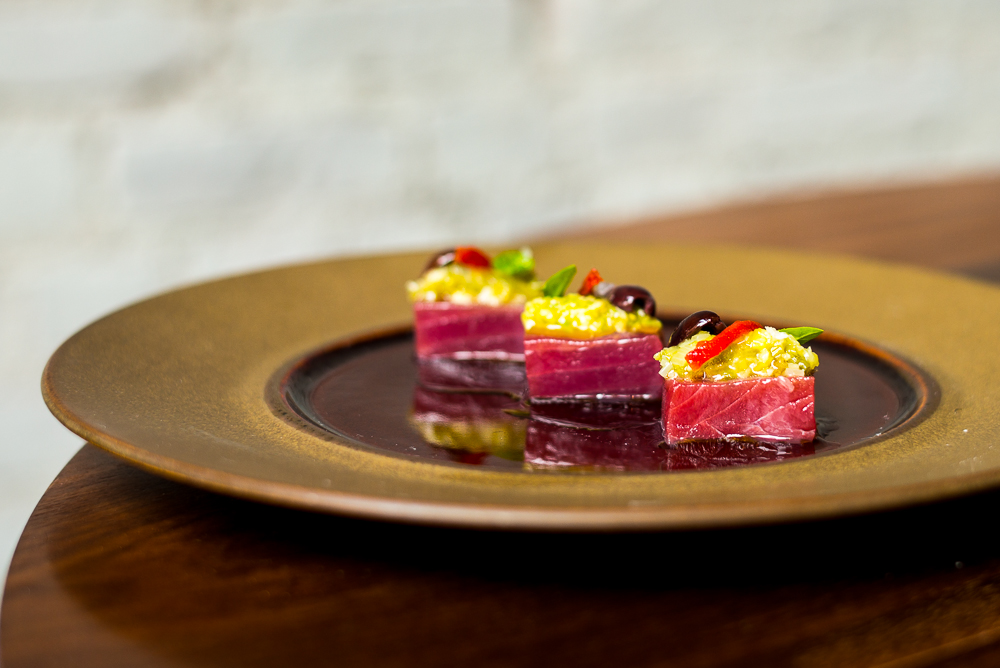 Tuna with wasabi and preserved tomato

All the All'onda action takes place in a bi-level space on 13th Street, just across from Corkbuzz. Nice company, right? Head upstairs for the quieter room, with exposed brick and wood environs. Or stay downstairs, where you'll find me at the shouty bar, cooling off with an icy Moretti ($6) and digging into raw hamachi, where pepperoncini and salty soy show off the fish's natural fattiness.

Jaeckle's crudo kung fu is strong. He dials down the oils of sardines with fennel-saffron puree here and pine nut relish there. He paints crimson tuna green with sinus-clearing wasabi and finishes the treat with salty black olives; gotta bring it back to the Mediterranean, right? Just one gripe, and Mother Nature might strike me with lighting for saying this: Jaeckle uses yellowfin for this preparation. Sustainability issues aside, it doesn't taste anywhere near as good as bluefin. So be it. 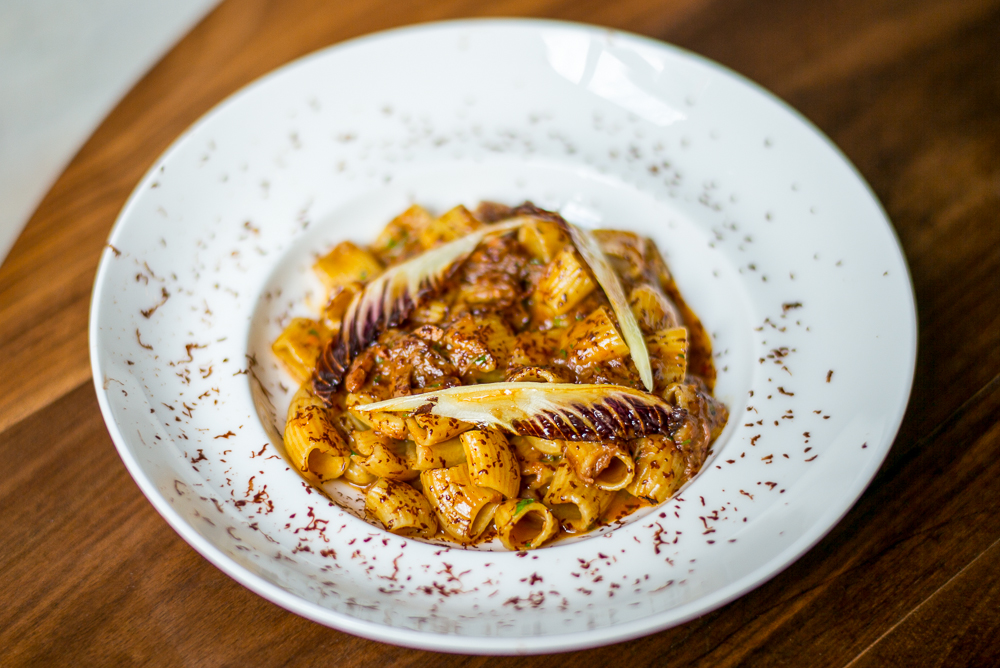 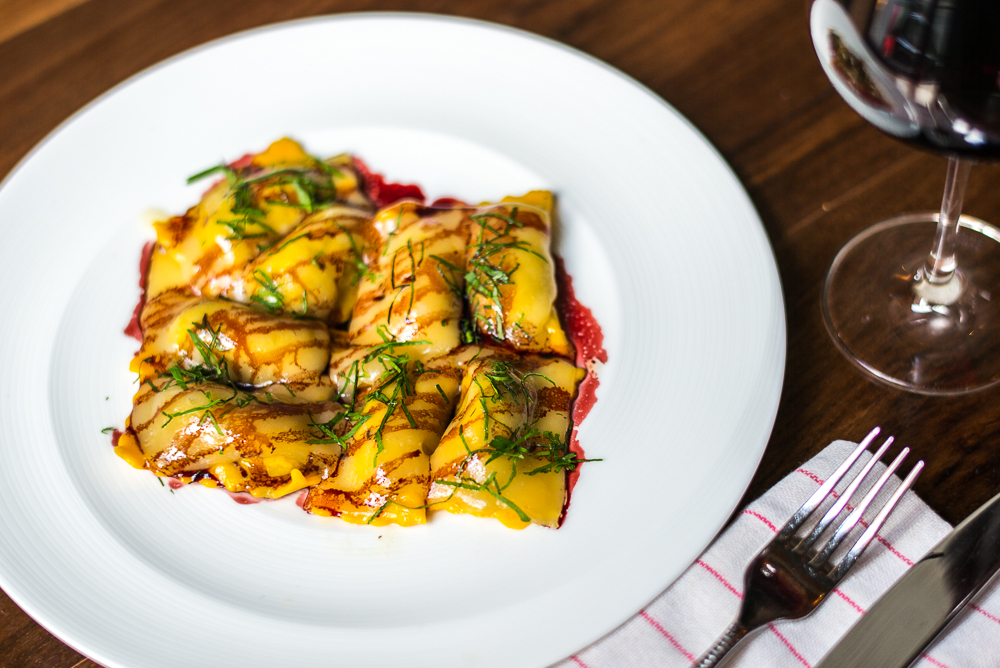 Pastas, rightly portioned somewhere in between appetizers and entrees, sometimes boast Asian touches. And sometimes they don't. A bowl of garganelli, studded with sweet chunks of peekytoe crab and sporting an undercurrent of heat, seems normal enough until you taste the sauce, which has more tang than tomatoes. Is it yuzu? It sure is, or yuzukosho to be exact, a chile paste made with the rind of the flowery Japanese citrus.

Lobster risotto is flawless, chock full of good fish fumet and cleanly tasting of the namesake crustacean. Mortadella agnolotti, a rich baloney sandwich in pasta form, is slathered in house made XO sauce — a funky mess of sopressata with dried shrimp and scallops. There's your Michelin star right there.

Then we have smoked uni bucatini. It's agreeable enough if you eat in 30 seconds flat; wait too much longer and the carbonara-like sauce starts to take on the texture of Elmer's glue. SELL.

Around this time you might run into a bespectacled New Jersey guy known as Chris Cannon who, like Jaeckle, was once a key player in the nascent Italian restaurant empire now known as the AltaMarea Group. Here at All'onda, Cannon helps out with the excellent wine list. You'll be well off with a variety of lean whites and light reds, none of which exceed $17 by the pour, even for the sparklers. 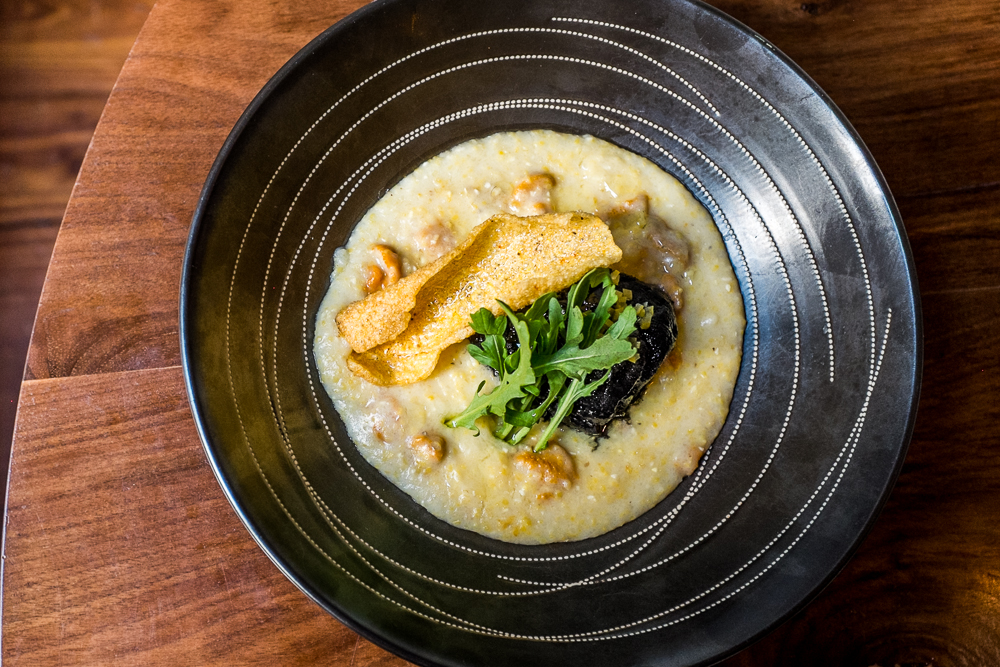 An easygoing Pinot Nero ($14) or even a fizzy Lambrusco ($15) will take you through the squid ink monkfish, as ugly as it is tasty, and packing the same "cuts with a spoon" texture of a scallop. It sits atop a sea urchin polenta that doesn't so much evoke the sea so much as it does a crystal clean corn flavor. I'll take it.

My advice: go for the beef, the good looking guy at this dinner party.

The dorade over chickpeas are fine, as is a somewhat above-average guinea hen (with foie gras sugo) and pork chop (with smoked apples). My advice: go for the beef, the good looking guy at this dinner party.

Jaeckle charges $52 for his strip; it reeks of dry-aging and rendered kidney fat. The flavor is clean and sweet and continues throughout the chew, without the blue cheese musk that can turn off entry-level carnivores. Is it a hint under-seasoned? That's what the veal reduction dipping sauce is for. And now you know why it's pre-sliced. Chopsticks, please!

Just as good is the football-sized short rib for two ($62), sous-vided for 48 hours to keep the insides nice and pink. Need a vegetable with that? Tomato jam coats the exterior, creating a layer of drool-inducing meat candy. Call it a bovine riff on Momofuku's sweet-savory bo ssam. 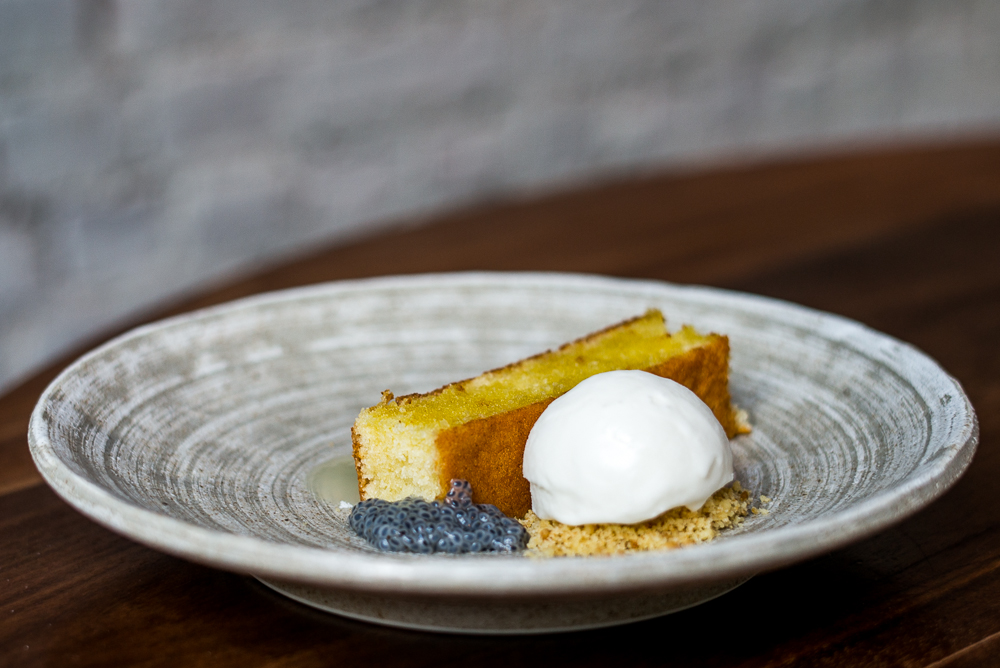 Desserts are okay. Skip the icy apple sorbet and the gelatin-heavy fennel panna cotta. Affogato, stinging of good rum, will get the job done. No, All'onda isn't exactly Osteria Francescana, Massimo Bottura's avant-garde playground in Modena, nor should it be. Jaeckle pushes the envelope just enough to keep things interesting without alienating.

Better to think of it this way: As Jaeckle's former bosses at AltaMarea keep pumping out more of the same at their Italian Restaurant Replicating Factory, All'onda wants to bring us something different. That's no slight on the people of AltaMarea; they've set a high bar for hospitality and I'm jealous the citizens of Tajikistan will get a Morini sooner than we'll have a Second Avenue Subway. But what our own city's culinary scene needs right now is an increased tolerance for creativity and risk, and that's why All'onda is so vital.

Update: An earlier version of this story stated that All'Onda was on the same block as Gotham Bar & Grill, which is located on 12th Street.

Our review of All’Onda

Cost
Starters: $6-$19. Pastas: $19-$21. Mains: $28-$62.
Sample dishes
Polenta chips, sardines, hamachi, XO agnolotti, crab garganelli, lobster risotto, steak and short ribs.
What to drink
Wine! Pay attention to the serious selection of Lambruscos by the bottle at $60 or under.
Bonus tip
Bar seating is the way to go; same week reservations for upstairs aren't too hard to come by on City Eats. Ask Jaeckle to bring back the parmesan dashi with tortellini. Also, don't miss the lumache with livery duck ragu.