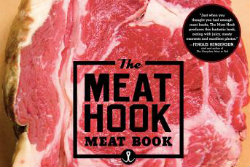 1) The Meat Hook Meat Book:
Executive Butcher and co-owner of The Meat Hook in Williamsburg Tom Mylan stopped by for an episode of Cutting the Curd to talk about the process behind making his first cook book for the esteemed Brooklyn Kitchen-based butcher shop. Where did the butcher look for inspiration when trying to share the art of breaking down an animal?

Before I moved to New York, I was really into old car manuals, and old car manuals back in the 50s or 60s used to show you an engine sort of exploded so you could see how all the parts came apart and went together, and what their context was. I think the most inspirational book to me is not actually a cookbook, it's actually a book by a guy named John Muir, who's a former atomic naval engineer…he wrote this amazing book called How To Keep Your Volkswagon Alive. 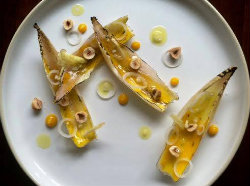 I'm just doing what I do which is largely seasonal/local as a foundation. I create a kitchen that has a lot of direct heat elements. I organized a menu around the cooking medium and designed it to be quick…I'm into that esthetic of immediacy. 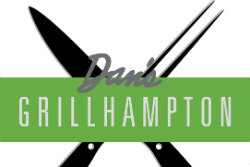 3) GrillHampton 2014:
Elizabeth Karmel of Hill Country BBQ and David Hersh of Rumba will be among the chefs competing to settle the age-old battle over who does BBQ best: New York City or The Hamptons. On this week's episode of Sharp & Hot, they showed up to tout their styles and hype the event. Here's Karmel on the impending battle: 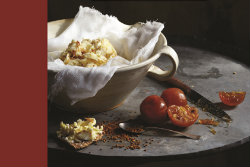 4) Jody Williams of Buvette:
Celebrating the release of her cookbook Buvette: The Pleasure of Good Food, Chef Jody Williams spoke to Michael Harlan Turkell of The Food Seen. On how to create authenticity that translates to restaurant service night after night:

I think if you're going to make any dish in your restaurant, it helps to really love that dish, crave that dish, want that dish, respect it and make sure you give it its due. So when I'm making your croque monsieur, croque madam, I'm worried, does it have enough ham, does the béchamel come out, is the cheese melty? It's that love to execute it make it what it deserves…that passion of getting it right. 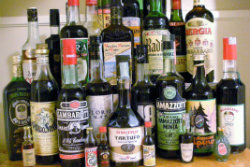 When we say Amaro, we typically think of products that are distilled, based either on grain or grape alcohol alcohol, or sometimes are based on sugar beet alcohol. To the Italians, it'd funny, that part of it doesn't really matter as much, to American mixologists, we must know the base spirit. The Italians say, 'can you tell the difference?'