Share All sharing options for: Johny's Luncheonette and Other Great Cheap Restaurants

During much of the 20th century, the working-class lunch counter was a fixture in many of the city's commercial neighborhoods. Now, probably 95 percent of them have disappeared in favor of slicker small cafes serving wraps, salads, burgers, burritos, and noodles, many of them national franchises with little character. One holdout in Chelsea is Johny's Luncheonette. Though it was founded in 1994, the premises — with its long Formica counter, twirling leatherette stools, and menu that concentrates on pancakes, omelets, hamburgers, and sandwiches — suggests a much older institution. How has the place survived? By modernizing the menu with Mexican and Greek-themed pita pizzas, and goofy invented heros that represent, not only gigantic amounts of food, but good value compared to any other eatery in the neighborhood. Welcome to Gutbomb Heaven. 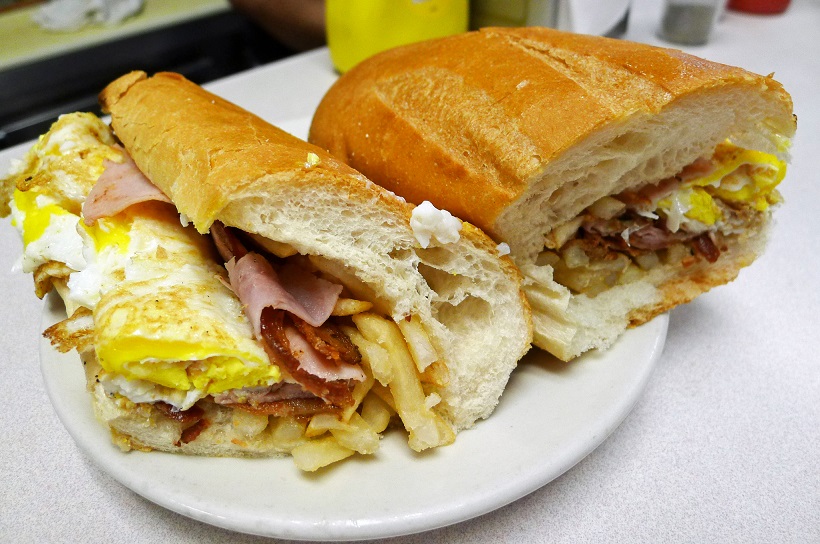 The hero advertised on the marquee, the Sloppy Johny, features grilled chicken, bacon, sautéed onions, cheese, and cole slaw, which can barely be contained within its demi-baguette, while the Brady Bun arrives extravagantly stuffed with turkey burger patties, turkey bacon, Swiss cheese, mushrooms, and onions. My favorite among them, though, are the subs containing breakfast ingredients, constituting a real New York answer to Austin's breakfast tacos. Prime among them is the Curious George (shown, $6.95), which includes three fried eggs, French fries right in the sandwich (Yay!), three strips of bacon, two slices of cheese melted to the interior in the salamander before the sandwich is assembled, and two pieces of boiled luncheon meat ham. It's delicious, and you won't walk away from this baby hungry. 124 W 25th St, 212-243-6230. 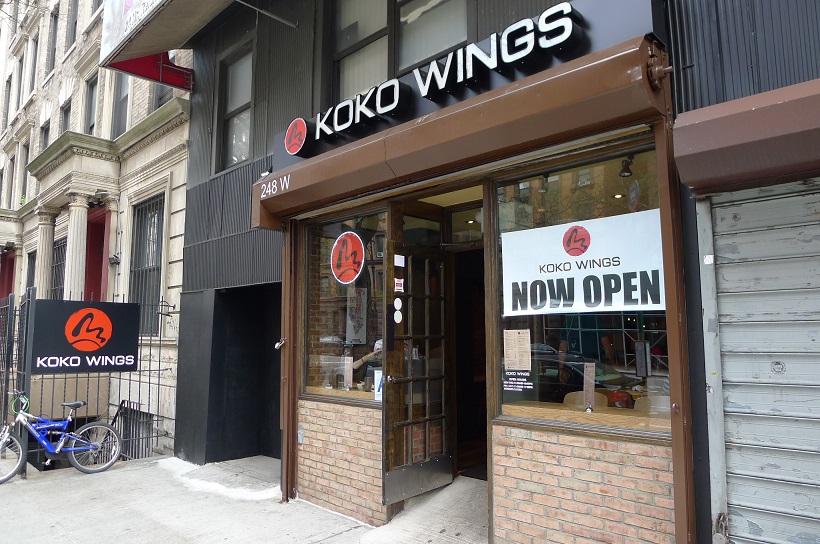 Inspired by the American product but one-upping it in several ways, Korean fried chicken has been with us several years now. It's never easy to find or inexpensive, but all that may be changing with places like Koko Wings, a new joint on the upper, Upper West Side — or maybe it's in Morningside Heights. True to the original Korean fried chicken formula, the only poultry offerings are wings, drumsticks, and chicken strips, with just a handful of sides (white rice, brown rice, kimchi coleslaw, pickled vegetables, and regular coleslaw). 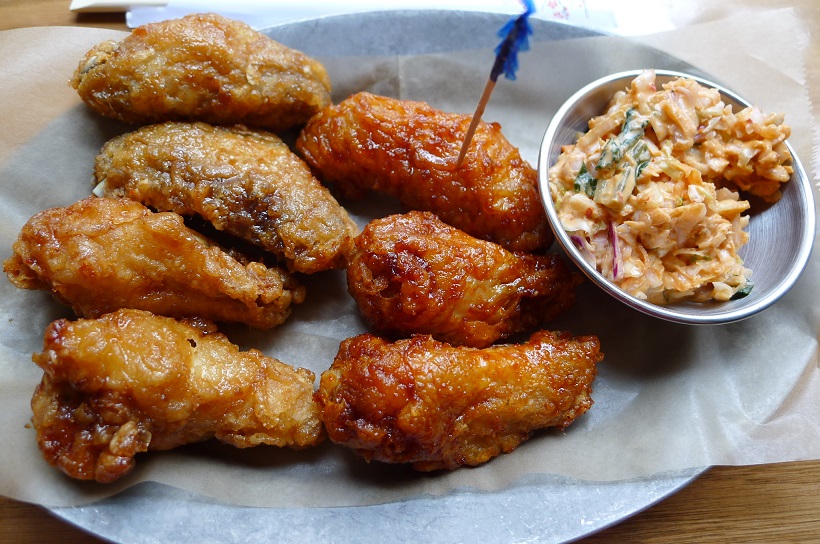 The kimchee coleslaw is particularly satisfying, leaving a sweet-and-sour burn on the lips, and the chicken parts may be split-ordered, that is you can get half hot and spicy and half soy garlic, which are the two flavoring schemes offered. The wings ($7.81 for six pieces, or sometimes seven) are big and meaty and glazed, and constitute perfect stoner food. 241 W 106th St, 212-932-7722. 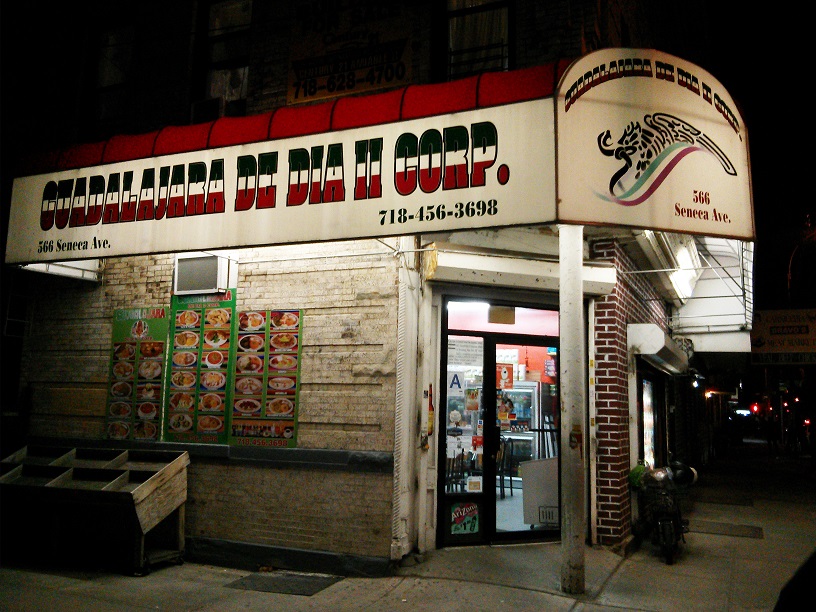 Some of the cheapest and best Mexican food in town is found in bodegas that set up a taco window, throw down a few small tables or a narrow counter with stools, and declare themselves taquerias. Set among the fly-by-night textile sweatshops of Ridgewood, Guadalajara De Dia II Corp. is just such a bodega — but with a difference. Contrary to type, the entire range of groceries has been retained, the seating is at a jolly communal table in the center of the product shelves, and the menu offers the full range of home-style southern Mexican antojitos, breakfasts, sandwiches, meat courses, and moles. 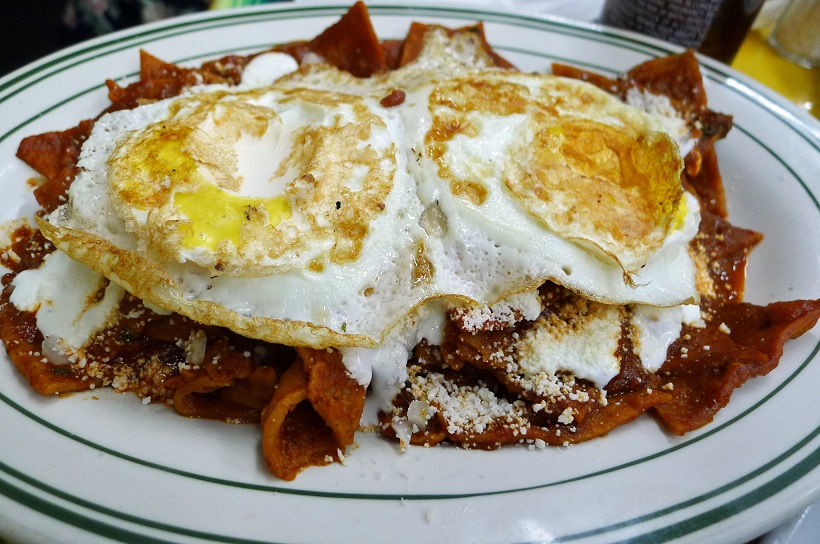 Chilaquiles (shown) are available all day, topped with two fried eggs and with an optional meat of your choice (pick the dried beef cecina). Some friends and I also sampled a milanesa de res cemita (Pueblan sandwich with a beef cutlet), a Mex-Tex burrito, fiery chicken soup called chilate de pollo, carnitas quesadilla, and a half-dozen other dishes. 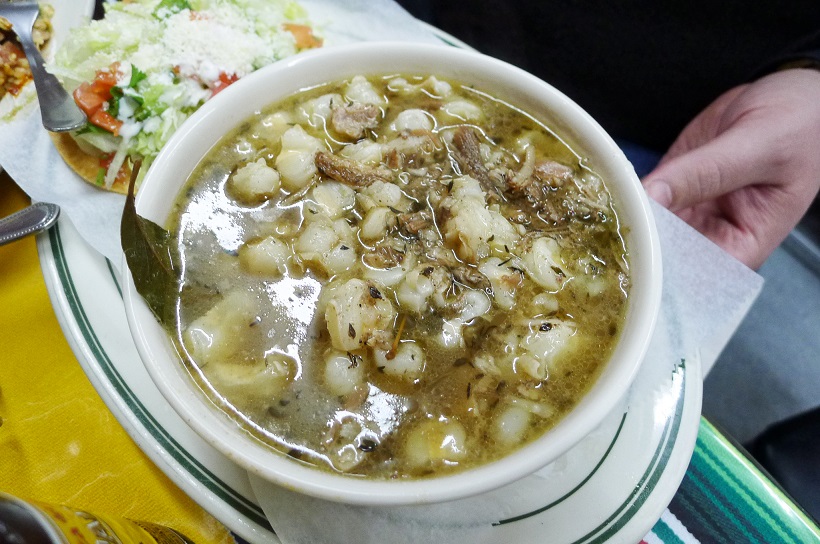 One of the best was a version of pork pozole available all week (not just on weekends) that came with a pair of tostados on the side. For an inexpensive group dinner with friends, there's no better place in Ridgewood, right across the border from Bushwick – and cut-rate beer is available on the premises. 566 Seneca Ave, Queens, 718-456-3698. 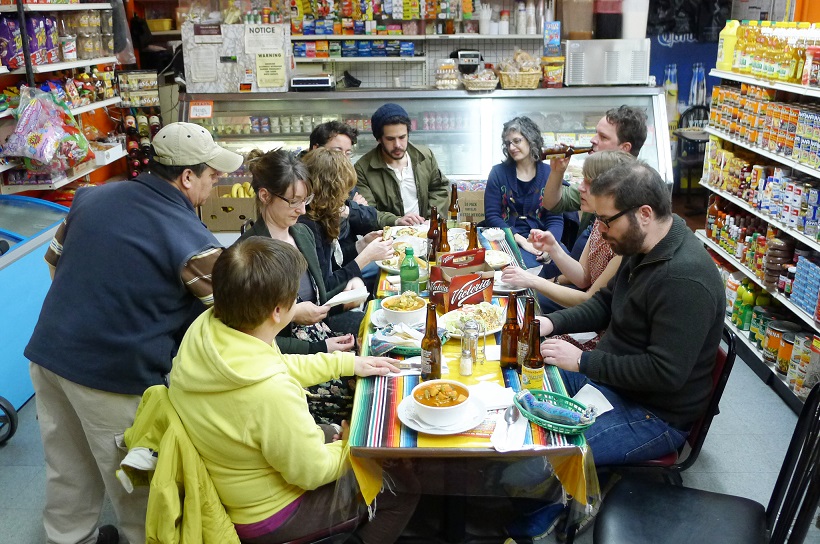 · All Posts by Robert Sietsema [~ENY~]