It can be hard to find something good to eat at the airport, especially if you don't have a lot of time to search around. But, there are a few gems out there if you know where to go. Just in time for the big holiday travel season, here's a re-run of Eater's handy guide to eating and drinking at LaGuardia with up-to-date info about all of the restaurants in each terminal, and recommendations for where to go whether you've got time to kill or just need a quick bite on the way to the gate. 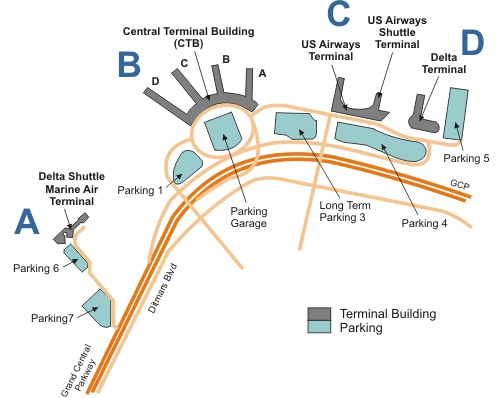 1) Victory Grill: This recent addition to Terminal C was developed by Andrew Carmellini. The menu includes salads, a burger, steaks, roasted chicken, fish entrees, and raw bar offerings. The space includes a bar, so this is a great choice if you want to knock back a drink (or three) before stepping on the plane. [Terminal C, post-security in the Food Court] 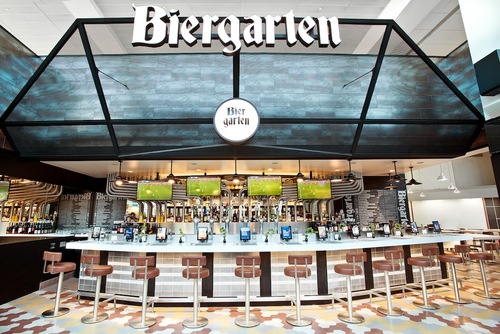 2) Biergarten: A beer bar with a solid list of craft beers selected by Brookyn Brewery's master brewer Garrett Oliver, plus German-influenced sandwiches, entrees, and small plates. This is quite possibly the best place to kick back at LaGuardia, and the food is surprisingly good. See the whole menu here. [Terminal C, Post-security in the Food Court]

3) Custom Burgers by Pat La Frieda: Famed meat purveyor Pat LaFrieda helped develop the meat blend for the burgers here, which are made to order, and served "with all the fixings." And there are also milkshakes, made in-house. [Terminal C, post-security in the Food Court, and Terminal D, post-security]

4) Bisoux: Delta brought in a star-studded lineup of New York City chefs to develop its culinary redesign of Terminal D, including Riad Nasr and Lee Hanson (Balthazar, Minetta Tavern, Pastis, and more), who designed a Provencal-inspired bistro. Croque monsieurs and duck confit are among the items on the menu, and everything can be ordered to-go. [Terminal D, post-security]


· Todd English's Figs Restaurant (pre-security, Food Court) and Figs Café (post-security, Gates D4-D6): English's airport chain offers pizzas, pastas, paninis, and a kids menu. Honestly, it may be the best bet for a sit down meal in this terminal.


· Empire Tavern: This is a full-service restaurant from Riad Nasr and Lee Hanson, until recently the co-executive chefs at Balthazar. It has a full bar and a menu of meat and seafood dishes, plus a full array of breakfast options that include Balthazar pastries* (post-security, Food Court).
· Victory Grill: Sit-down restaurant from Andrew Carmellini with American fare, including steaks, roasted chicken, and raw bar items. See the menu here* (post-security, Food Court).

· Bisoux: Here Minetta Tavern and Balthazar chefs Riad Nasr and Lee Hanson created a menu of French country classics. Great spot for a drink* (post-security, by Gate 3).
· Taste of Prime: Porterhouse chef Michael Lomonaco brings a steakhouse to the boarding gates, with "steaks, chops, burgers, fresh salads and fish." Note: it's relatively pricey and there have been accounts of slow service. (post-security, Departures).
· The Minnow This seafood bar by Andrew Carmellini has salads, sandwiches, a raw bar, sushi, and other seafood options. Concessionaire OTG asked Carmellini to open this spot after being impressed by the raw bar at The Dutch.* (post-security, Food Court).

NOTE: The recent spate of big-name openings like Empire Tavern, The Minnow, the Biergarten, and Custom Burgers by Pat LaFrieda is just the beginning. Still on their way to Delta's terminals: a branch of Michael White's pasta and pizza concept Cotto and a Japanese restaurant from Jamison Blankenship of Chuko.