Share All sharing options for: The Pastry Cases Plunge Into Patisserie Tomoko

In each installment of Pastry Cases, sweets fanatics and lovers of (most) things baked Charlotte Druckman and Gabriella Gershenson (of Every Day with Rachael Ray) share a favorite confection, slice of cake, ice cream scoop, or other delectable delight worth the sugar high—and the trek. In this week's edition, the twosome bring a third, Momofuku's Christina Tosi, and together they sample the elegant Franco-Japanese dainties at Patisserie Tomoko in Williamsburg, Brooklyn. 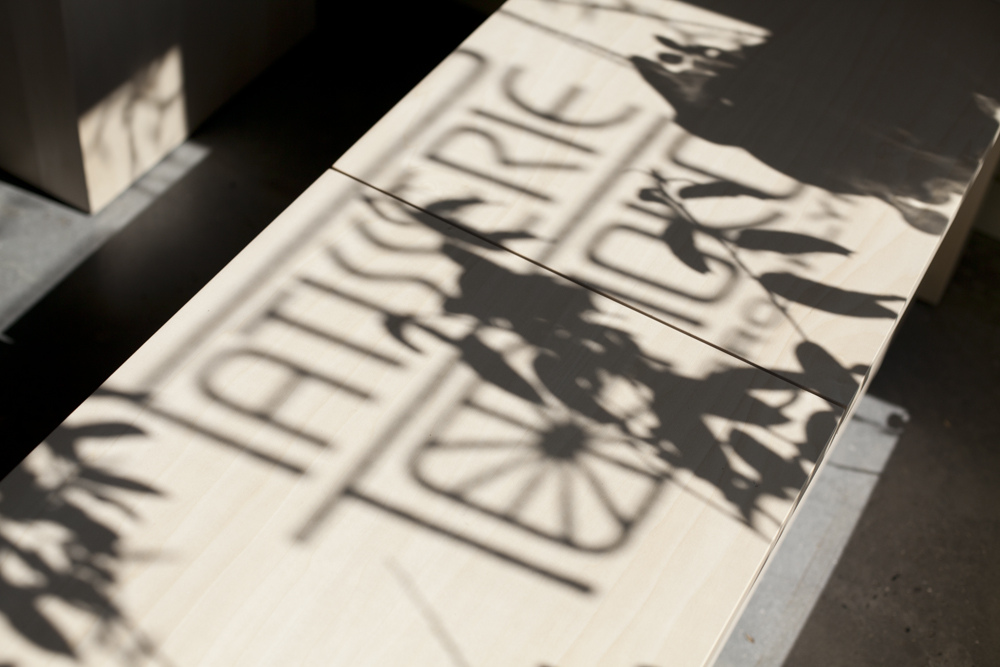 CD: I'm kicking off the chat with a nod to Christine Muhlke, who first flagged this place. Once she gave it the Muhlke seal of approval, I figured we should check it out, and invited a special guest who is as enthusiastic about this stuff, if not more, than we are. That's how we wound up in Williamsburg, at Patisserie Tomoko, with Christina Tosi ordering nearly everything on the menu. What were your expectations going in?

GG: I was excited, because I love Japanese food in general, and the reverence with which the Japanese treat French pastry. They might even be more devoted to the precision of the craft than the French themselves, or so I've been told.

CD: I get excited when I see a combining of Japanese ingredients and flavors with those French techniques. There aren't a lot of pastry chefs who do it well. I think Tomoko Kato is one of the few who do.

GG: I adored listening to her tell us about her background. She is so self-assured—went to culinary school for pastry arts in Kyoto, and worked in Japan, but knew she wanted to go to the States. She worked with Bill Yosses at Bouley and Florian Bellanger at Le Bernardin. She was the opening chef for Cha-An teahouse and then she decided, Well, before I turn 40, I want to use my energy to open a place of my own, and this is it.

CD: I like the fact that she's open late—'til 11 p.m. most nights and has a liquor license.

GG: But doesn't open until noon or so! Unusual for a bakeshop. It has a wraparound horseshoe counter divided into two parts—the retail side with takeaway pastries and a coffee bar, and a counter with seats for sit-down plated dessert and wine pairings. Now would be a good time to talk about what we ate, I guess. 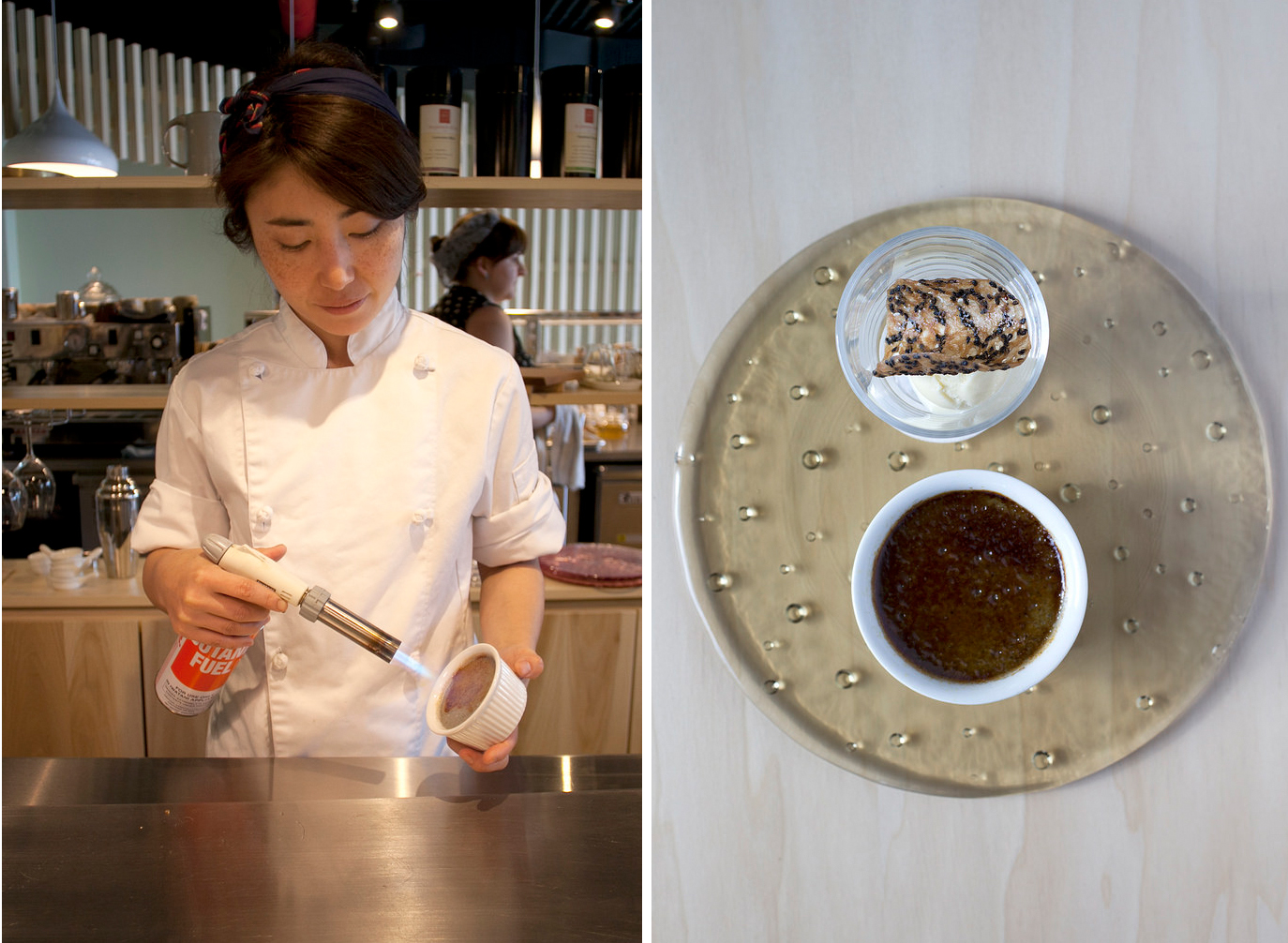 GG: She is very focused on the quality and purpose of her ingredients. She makes her own black sesame paste for that crème brûlée. The custard was dark and earthy, very nut-buttery. She told us that she uses Japanese sesame seeds because the taste is different from the Middle Eastern kind—milder. How did you think the sake went with the sesame?

CD: I've never had anything like that before and I liked it—I found that the sesame bounced off of the sake in an unexpected way, so each of those flavors heightened each other.

GG: I loved that ice cream; it was exquisite—floral and yeasty/boozy in equal measures.

CD: Tosi noticed, right away, Tomoko's use of the pacojet to make her ice creams and sorbets, which gives them, especially the ice cream, a really soft, lovely consistency. 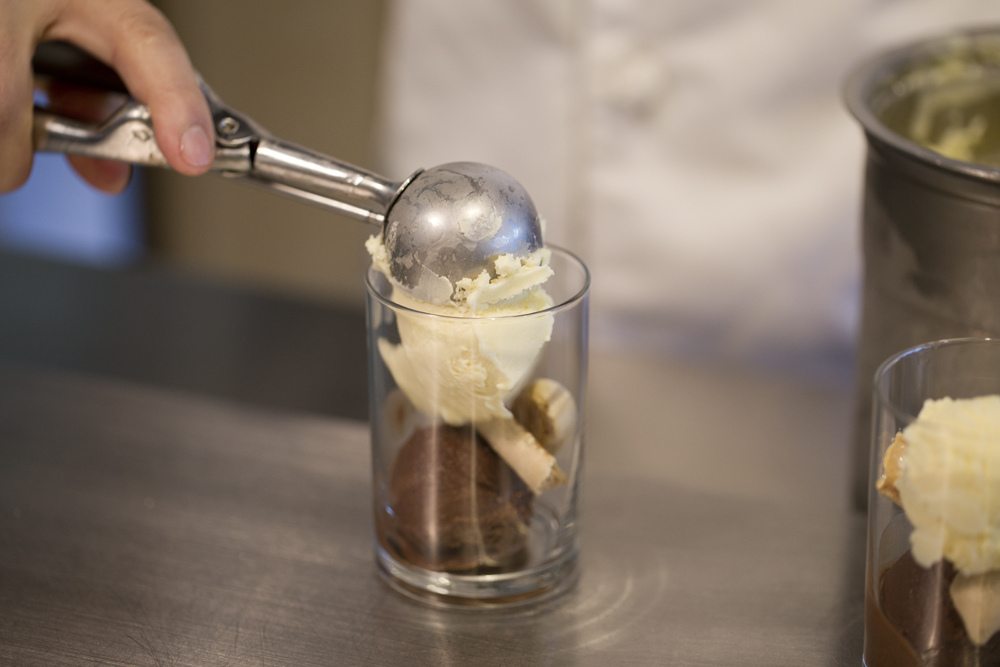 GG: The vanilla scoop in Tomoko's little sundae "amuse" had Tahitian vanilla in it, which made it taste like marshmallows. She served it with salty chocolate sorbet and some meringue batons.

CD: The meringue was incredibly light and crunchy. There's such deftness and subtlety in her execution. But then, as Tosi pointed out, her flavors aren't dulled. Often, in these East-West desserts, the Eastern flavors are muted. Not here. Yet Tomoko also combines a lot of soft textures—creaminess, and sponge, and chewiness. Normally, that would annoy me. I wouldn't necessarily want to see ice cream and crème brûlée together but I liked it. She made me aware of so many different kinds of softness.

GG: But wait, we haven't gotten to the snottiness. 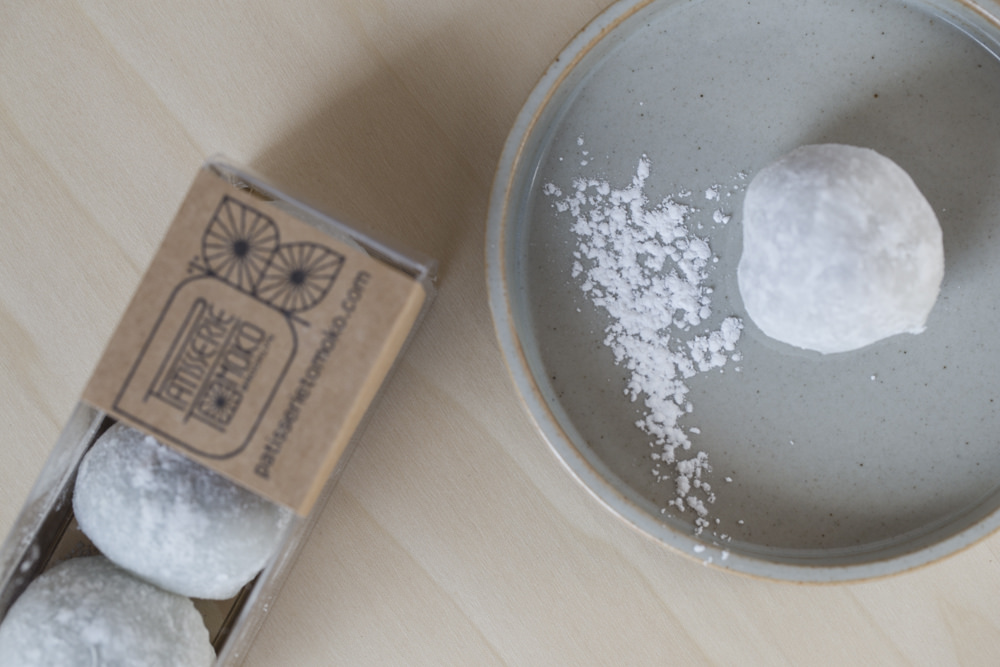 [Tomoko Kato makes her own mochi, which she wraps around an Earl Grey tea infused chocolate ganache.]

CD: Hahahaha! I liked the snottiness, or Tosi's phrase, "snotty chew." When she threw it out there she was paying Tomoko a compliment. You are, of course, speaking of the mochi.

CD: I've never had mochi like this. Have you?

GG: No. I've had the yummy mochi on Pinkberry yogurt, and delicious savory mochi that comes in slabs that my mom used to toast in a cast-iron skillet when she was on a macrobiotic diet. They got puffy and amazing and I loved them. But I never had mochi like this. She said it's a special type that is sweetened with sugar to help the rice dough retain its moisture.

CD: Gyuhi, it's called. It reminded me of raw pasta dough in its suppleness. The dense ganache center is not at all gelatinous. It's atypical for mochi. She treated it more like a truffle. 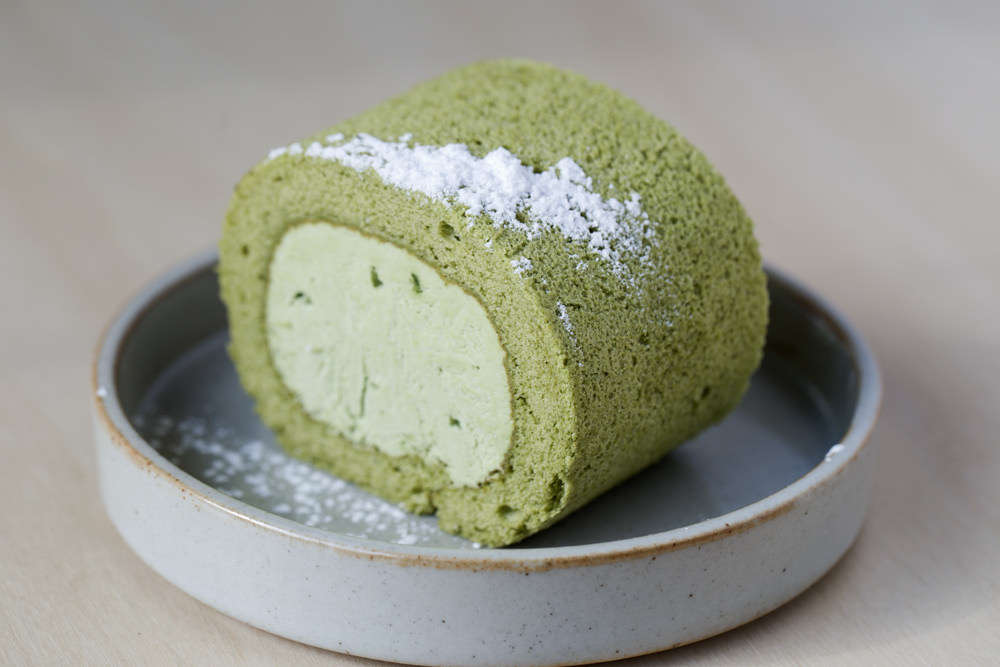 [Go green or go home: This matcha tea roulade is made with matcha sponge and matcha cream.]
GG: Tosi said it was like eating dough before it's ready, all sticky like, not smooth (also, this was a compliment!). I wish we had tried the green tea flavor, too. But we did have a wonderful green tea roulade. Green through and through! Green sponge, green cream!

CD: The matcha was intense in a wonderful way—astringent and a little bitter, as it should be. I like to have a matcha latte everyday—I'm not sure we've discussed this, but it's true. That roulade center was pretty much, flavor-wise, my ideal matcha latte in mousseline form. And the sponge exterior was so springy. Again, you had the softness of that cake and then the smooth, creamy softness of the mousse, and I wasn't like, WHERE'S MY CRUNCH? I think maybe everyone's gotten a little too carried away with crunch. Is that possible?

GG: Anything is possible. She did have some crunchy delicious chocolate nuggets with some kind of croquant of mixed nuts on her petit fours plate. 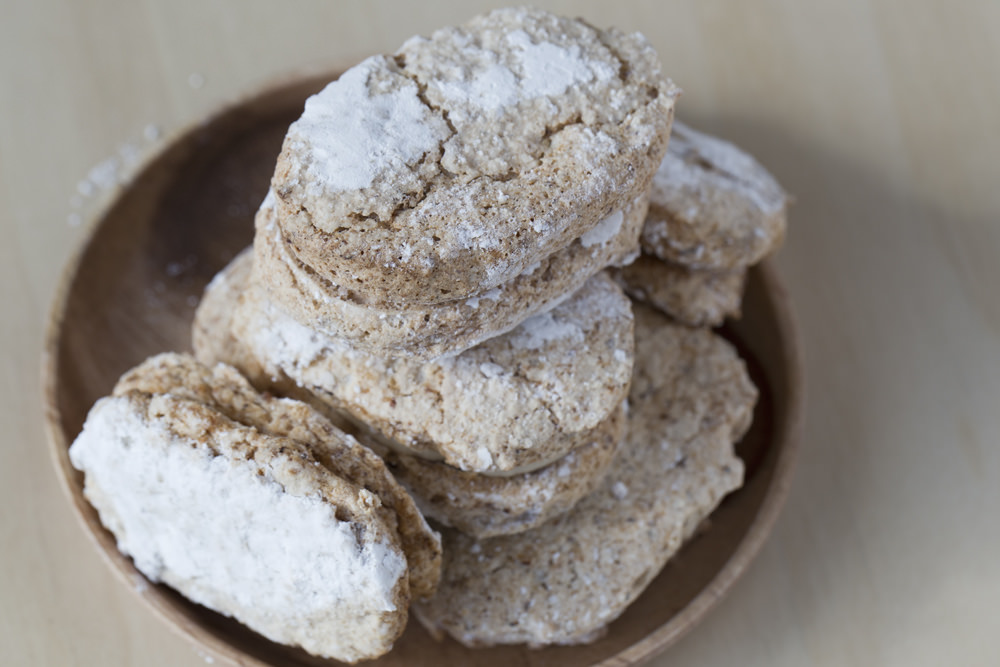 CD: You know what else I liked on that cookie plate? The lavender-mint macaron and the rosemary shortbread. And what about the dacquoise cookie sandwich?

GG: Yes, we started off with the dacquoise and a few other items from the pastry case. It was a great example of her carry-away stuff and also of her bringing back an oldie but goodie. It was a nutty meringue sandwich in the shape of Weetabix with a very classical center of coffee buttercream. This was a real classy sweet. 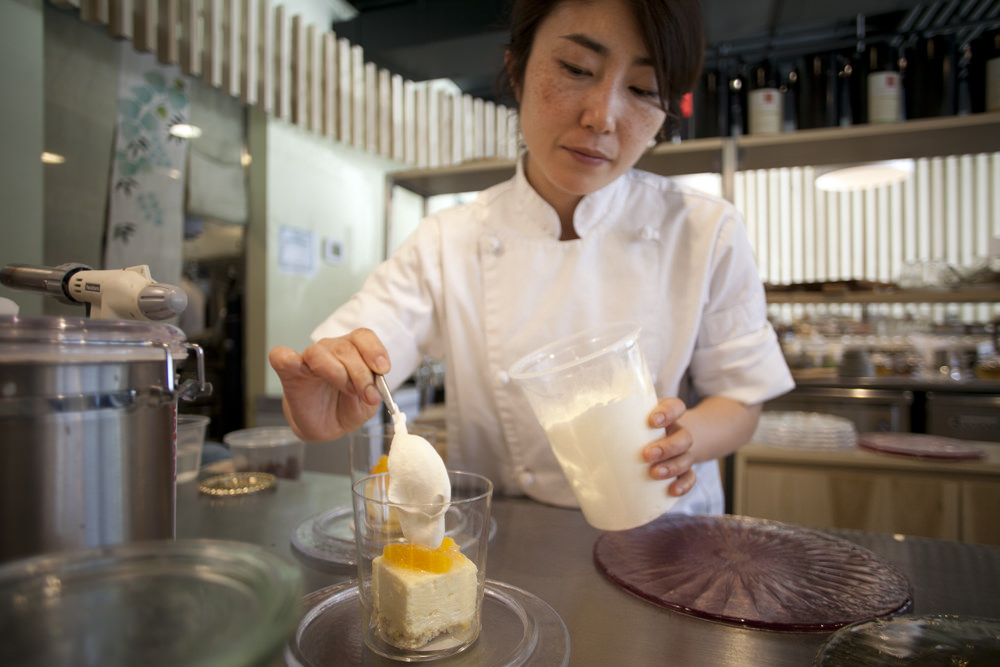 [Tomoko Kato assembles her cheesecake, which she makes using homemade ricotta.]
CD: At this point, we thought we were finished. But when she told us about how she makes her own ricotta because she likes hers best, we were compelled to try her version of cheesecake, which is more ricotta parfait than cheesecake.

GG: I insisted that we order that cheesecake! How could we not? It was a cube of cheesecake layered with a citrus compote. The flavors are soft and rounded but assertive too. I loved that I could feel the soft curds in my mouth. This was a wonderful note to end on.

CD: Tomoko's is the kind of pastry that makes you almost more attuned to what you're eating. It's not obvious; it's just really delicious, and beautiful, and well-balanced. I don't like to use the word "delicate" because, well, yeah, woman chef, but I'd say the same if it had been made by a dude. It's delicate, but the flavors are bold.

GG: And confident, too—quiet and self-assured. This woman knows what she is doing.