If you've seen Chef, doubtlessly you now find yourself craving a Cuban sandwich. In the movie, after being eviscerated by a critic, L.A. chef Carl Casper hightails it to Miami, where he falls in love with the Cubano all over again in Little Havana, and resolves to establish a food truck specializing in the classic pressed sandwich, which we all now realize is a species of panini.

In case you wondered, the sandwich was invented in either Key West or Tampa as a lunch for expatriate Cuban workers (but probably based on earlier Havana models), and from thence traveled to Miami, where it became the signature snack of Little Havana. Made on a demi-baguette and annealed in the firm grip of an Italian sandwich press to the thickness of a wallet, the sandwich typically contains slices of pernil (roast pork), Swiss cheese, and luncheon-meat-type boiled ham, an ingredient that somewhat limits the era during which the sandwich had to have been invented. Wikipedia says 1860; I would guess far later than that, say 1920 or so, which is when the French baguette generally caught on in the Western Hemisphere, and Latin and Italian bakeries started making them. 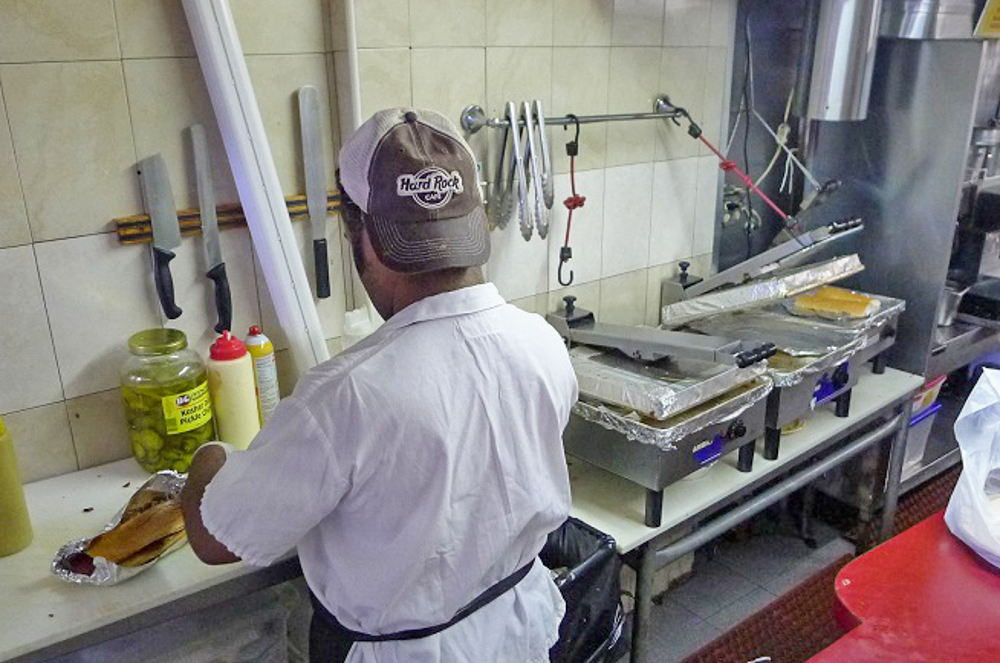 [Sandwich making at Margon]
Either way, the sandwich was popularized in the Cuban cafes of New York in the '50s and '60s, corresponding to the arrival of refugees from the Cuban Revolution, and the city clasped it to its bosom. In fact, during the latter half of the 20th century, nearly every street in certain manufacturing and warehousing neighborhoods, including Flatiron and Chelsea, had a Cuban lunch counter, of which almost none now remain. As late as the 1980s, you could get four or five different versions on Chelsea's Eighth Avenue alone, and Cuban-Chinese food made by mixed-race immigrants from the island were one of the predominant restaurants types in Chelsea, the Upper West Side, and parts of the Bronx.

Yes, you have to dig for Cuban sandwiches now — in the New York version, the outside is slathered with margarine, the inside often with mayo (instead of the mustard shown in the film), and a very teutonic dill pickle or even a layers of them adds extra zing. Note this sandwich is similar to its cousin the medianoche, which was originally made on a different kind of bread, and was smaller. Here are four places you can score a good Cuban sandwich in NYC. 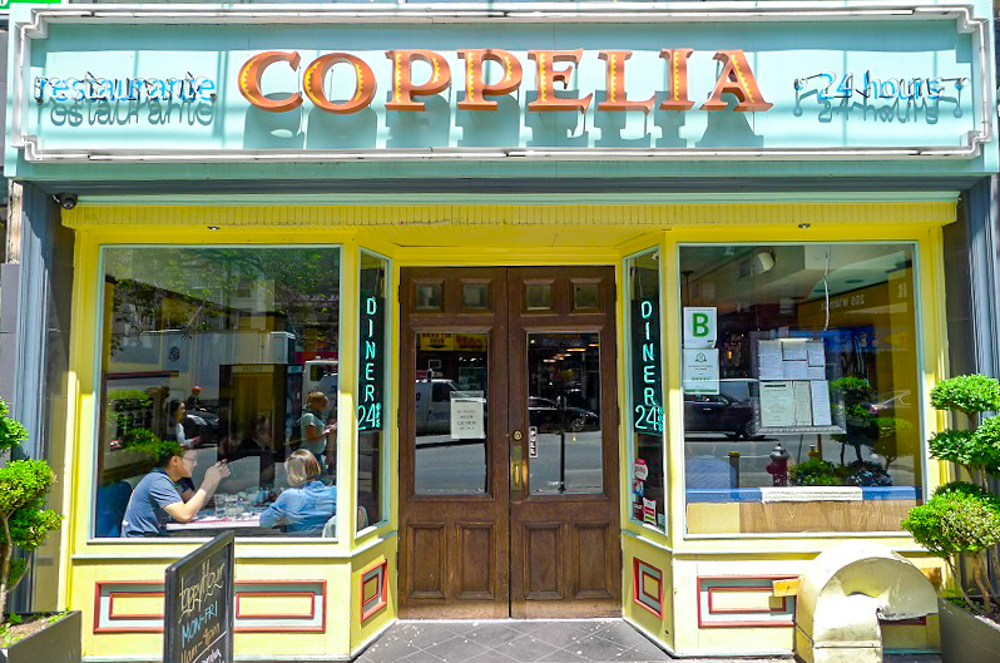 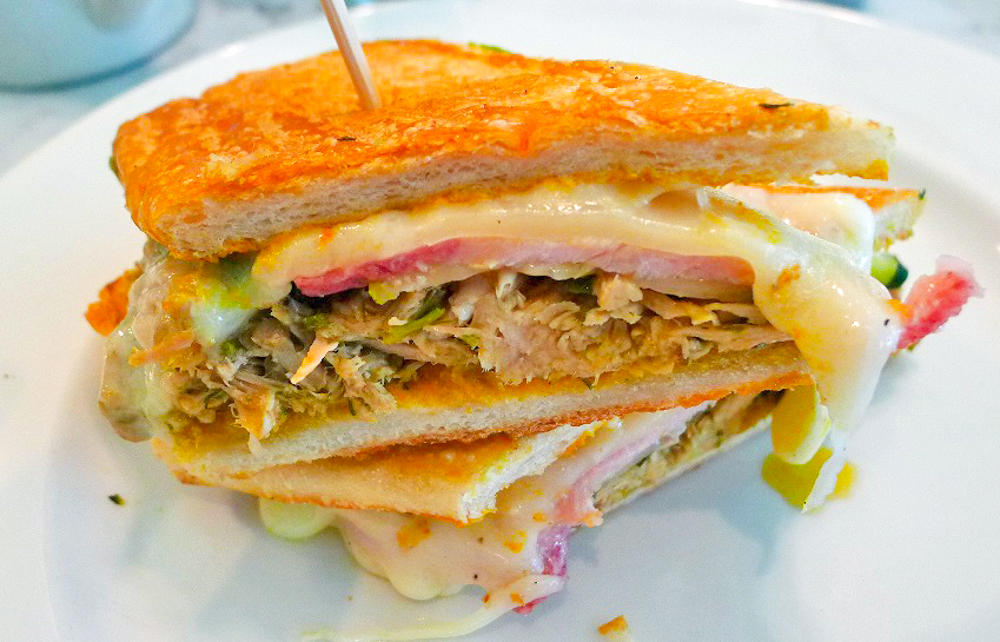 Coppelia — The Cubano ($9.95) is lush and somewhat updated at Julian Medina's 24-hour pan-Latin diner. Star of the show is thick slices of herby and garlicky pernil; the white cheese, milder than Swiss, is thick and oozes; artisanal sweet pickles replace the usual dill chips; and the inside is coated with what tastes like Sriracha mayo, for a slight burn. That said, the innovations are reverent and the sandwich retains it all its gloppy glory. 207 W 14th St, 212-858-5001. 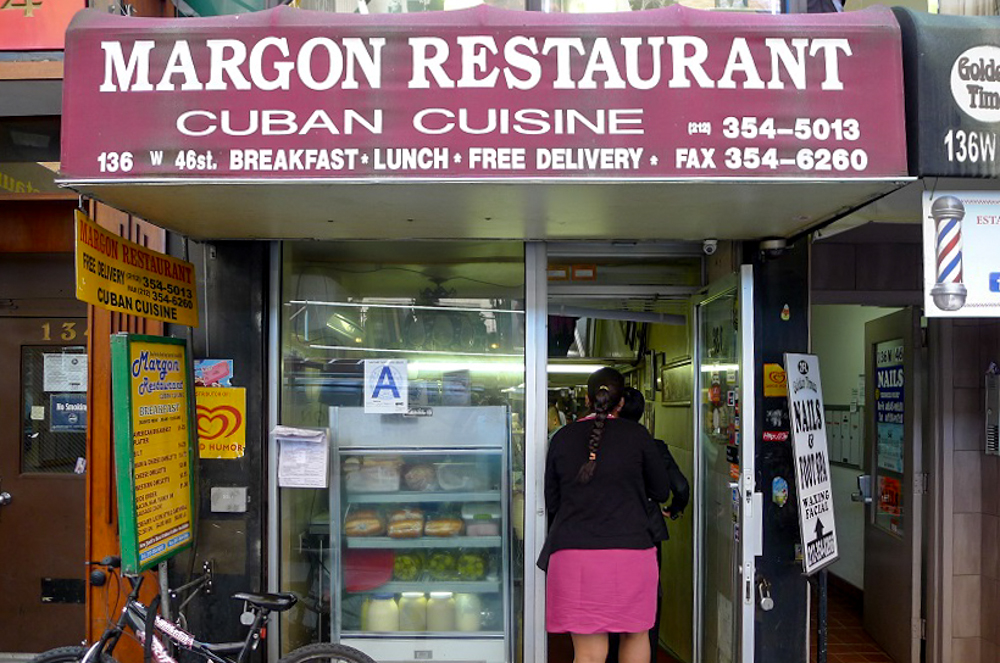 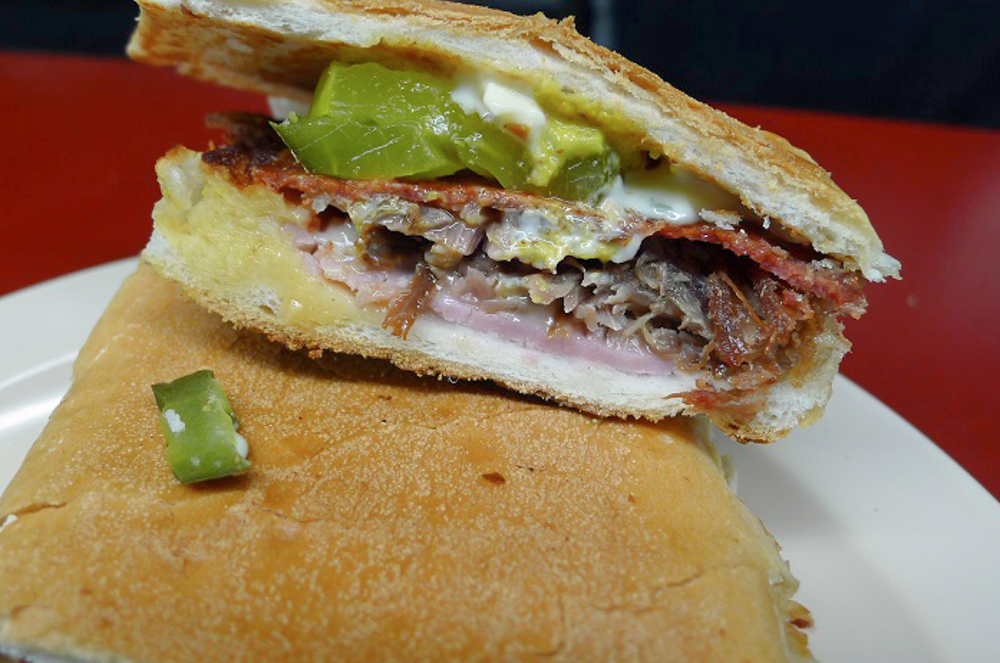 Margon — This antique lunch counter, founded in 1970 and mobbed at lunchtime, is like a museum of working-class Cuban eats, and right off Times Square, too. Their Cubano ($7.65, no tax) is the best in town, adding slices of salami to the usual ham and pork roast, well-lubricated with both mayo and grainy mustard and not stinting on the pickles, either. Divided into threes and pressed flat as a pancake — chef Carl Casper couldn't do it any better. 136 W 46th St, 212-354-4306. 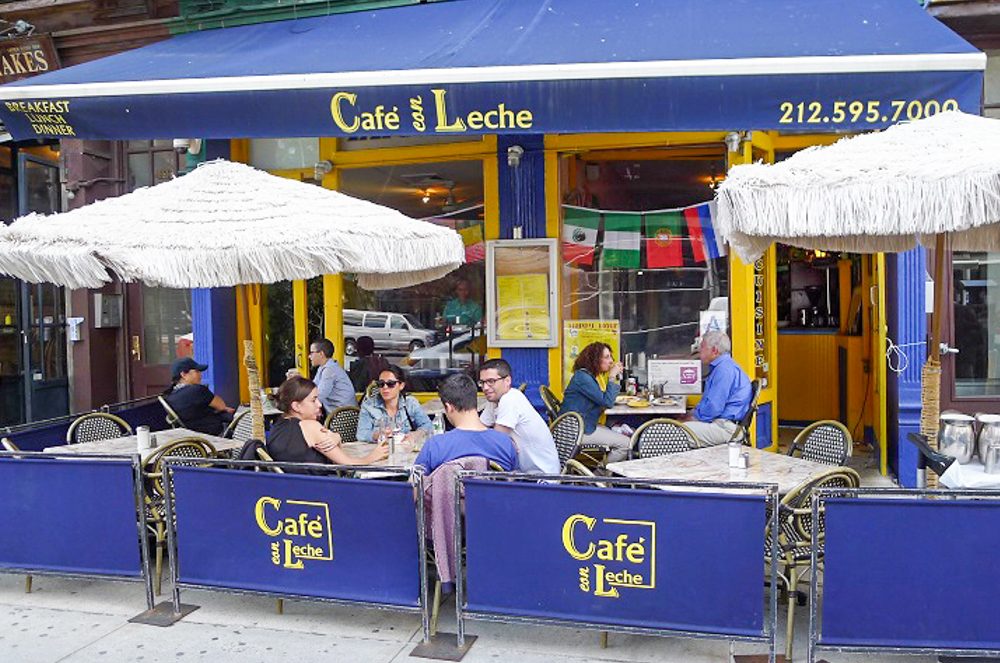 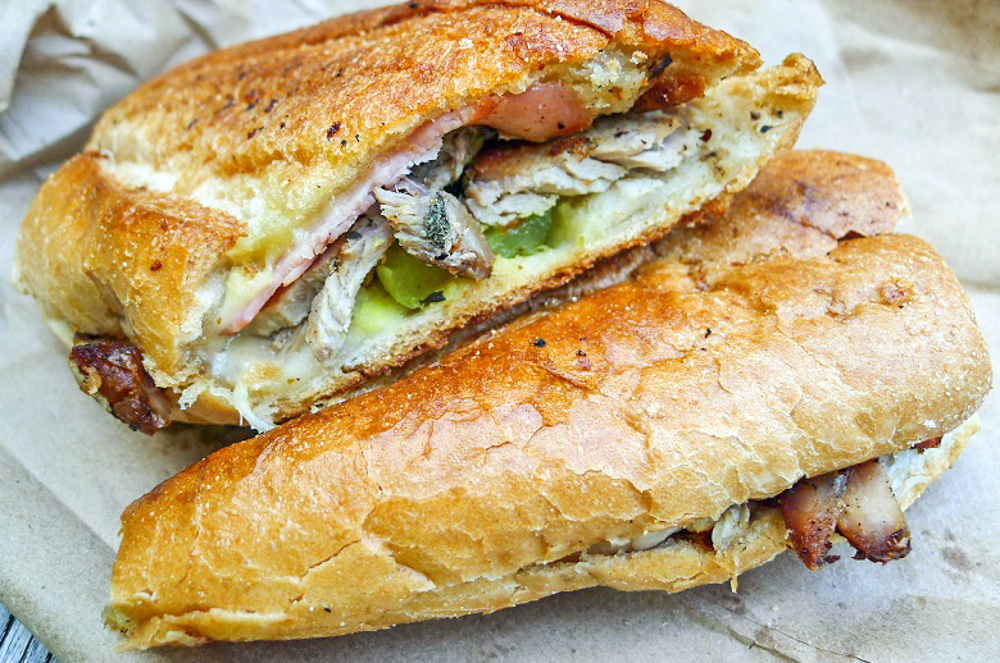 Café Con Leche — Something of a sentimental neighborhood favorite, this UWS pan-Latin restaurant is considerably more comfortable than a lunch counter, and with outdoor seating, too. The Cubano ($7.50) deploys lush chunks of pernil rather than thin slices, the condiment is mustard, the bread less pressed than it ought to be, yet the sandwich is memorably good, especially when washed down with a beer or the namesake beverage. 424 Amsterdam Ave, 212-595-7000 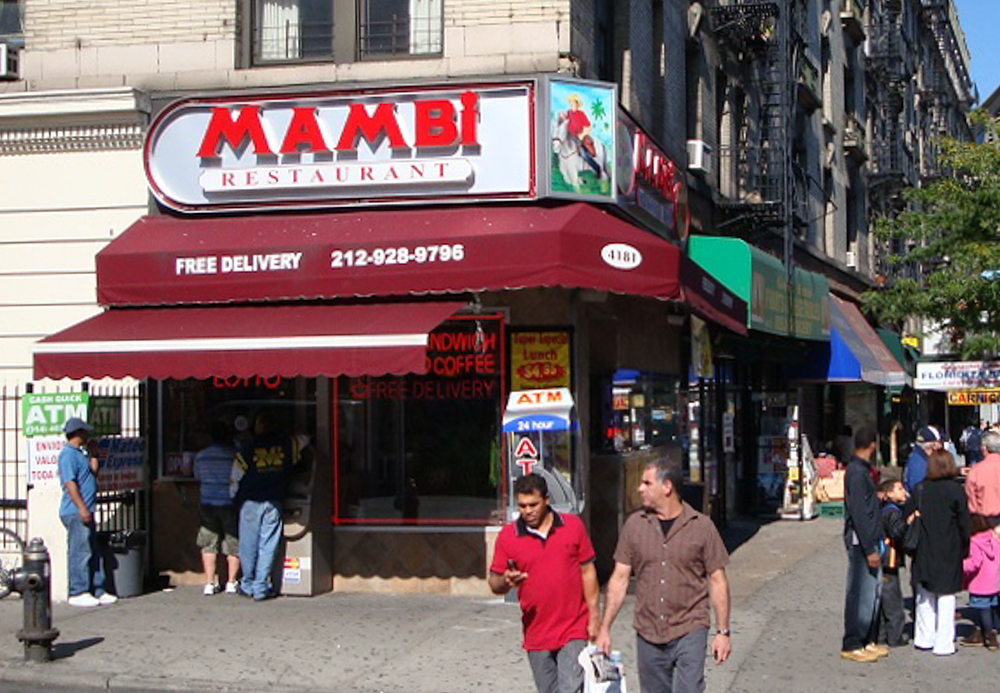 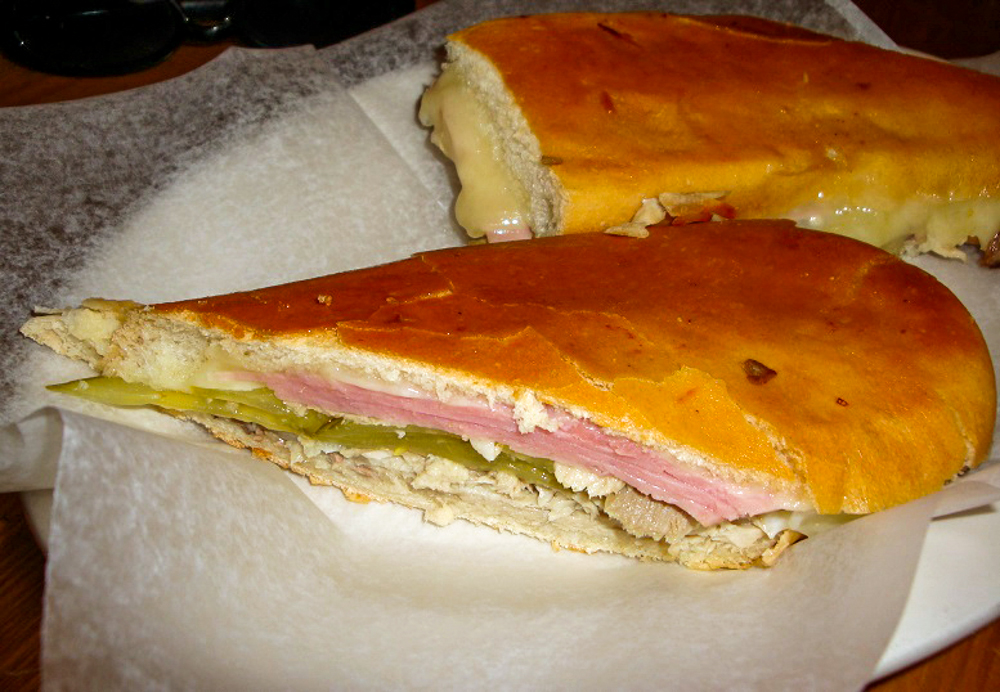 Mambi — At this rollicking Washington Heights Dominican, the Cuban sandwich comes in two denominations: normal size for $3.20, double-size for $5 (shown). The sandwich represents a modern incarnation based on economics, in which the boiled ham has become more profuse, while the pork roast has been sliced thinner and decreased. No matter, the sandwich is still excellent of its type, with a thick layer of dill pickles providing extra pucker. 4181 Broadway, 212-928-9796.