Filling out expense reports. Putting down lame horses. Ordering ramps or soft shell crabs come springtime. These are all tasks that evoke a sense of duty — the ramps and the crabs more so this time of year. So it's with a degree of skepticism that I eyed a crostino containing both at Gato, Bobby Flay and Laurence Kretchmer's Spanish-tinged Mediterranean restaurant in Noho. In fact I'll go even further: it was a dish I didn't want to order in a restaurant that, thanks to a trio of uninspired meals, I wasn't terribly excited to be in.

And then I sampled the toast and was briefly reminded that The Iron Chef was once quite good at what he did.

Too many cooks render their soft shells flavorless in the fryer. Not Flay, who sears them on the plancha, adds harissa vinaigrette, places them on a grilled baguette, and anoints the entire affair with charred ramps. The crustaceans collapse in the mouth with little more resistance than a communion wafer, spilling out their heady oceanic juices, while the bread soaks up any errant liquid, and the oniony ramps reset the palate for another bite. The cost is $15 and it is, without question, one of the few interesting soft shell or ramp preparations I've had in the past half-decade. 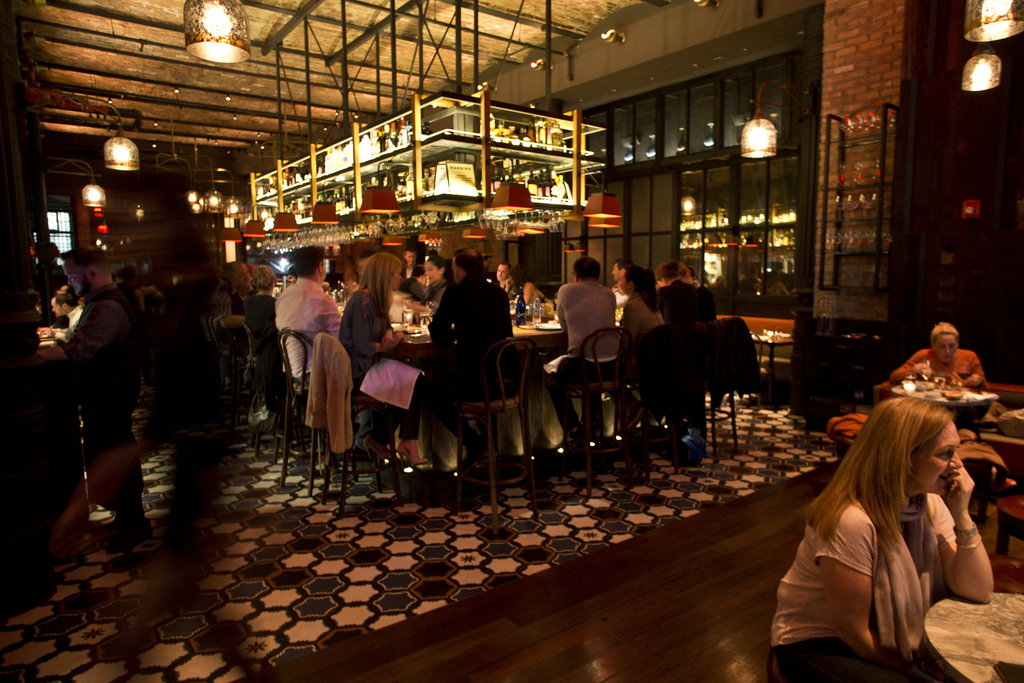 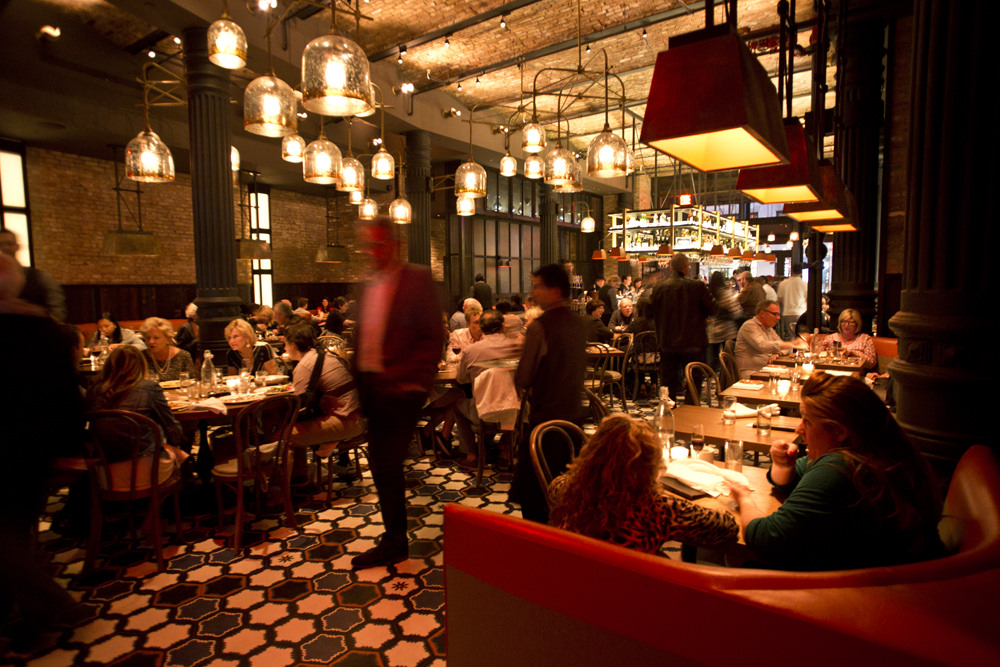 It's also one of the few interesting things to eat at Gato. The menu boasts shellfish salads with as much maritime essence as textured soy protein and braised rabbit legs ($30) with less pizazz than a Lean Cuisine microwavable meal. Not a whole lot is bad here, just blah, and that brings us back to the discussion of obligation, because Gato isn't really the type of place I'd review if the chef weren't a national celebrity like Bobby Flay. Most of the food is about as affordable and forgettable as at many of the city's neighborhood joints that scratch by on good will, good service, a few solid dishes, and lots of walk-ins.

Not a whole lot is bad here, just blah.

Gato, on the other hand, books up many of its prime time slots three to four weeks in advance, revealing that a certain class of New Yorkers apparently thinks about white bean dip with pita 30 days out ("Better make a reservation!"). Most of my own meals, in turn, occurred at the U-shaped counter for walk-ins; bartenders could usually rustle up a few seats for me and my companions in 30 minutes or less. Those bartenders also make some ghastly potables — from watery gin cucumber cocktails to medicinal (and flat) French 75's.

A friend who dined at Gato recently told me a host asked her the following curious question: "Are you Bobby Flay fans?" It was surely innocuous small talk but it's also something I've never encountered at, say, The French Laundry. "You guys must be big Thomas Keller hounds, right?" In other words, Gato is aware of the chef's draw. Come in on any given night and you'll see him in the kitchen, cooking.

Long before Flay became top Food Network Talent, he was the acclaimed young chef behind Mesa Grill, which he opened in 1991 and where he introduced many of us to ancho chili powder and other spices of the Southwest (it shuttered last year). He also opened Bolo in 1993, a three-star New York Times Spanish restaurant that partly informs some of the food at Gato. Flay still serves Bolo's seared duck liver in his new Noho digs, a dish that, when you get past all the nostalgia, ranges from overcooked to over-sinewy.

The Iberian food scene, alas, is different than it was in the 1990s, or even the early aughts, when Bolo was in its prime (it closed in 2007). We now have fine spots like Tertulia, taking its inspiration from Asturias, Aldea, representing for Portugal, Toro, doing the pan-Spanish thing with panache, and La Vara, tipping its hat to Andalusia and the country's historical Sephardic and Moorish populations. 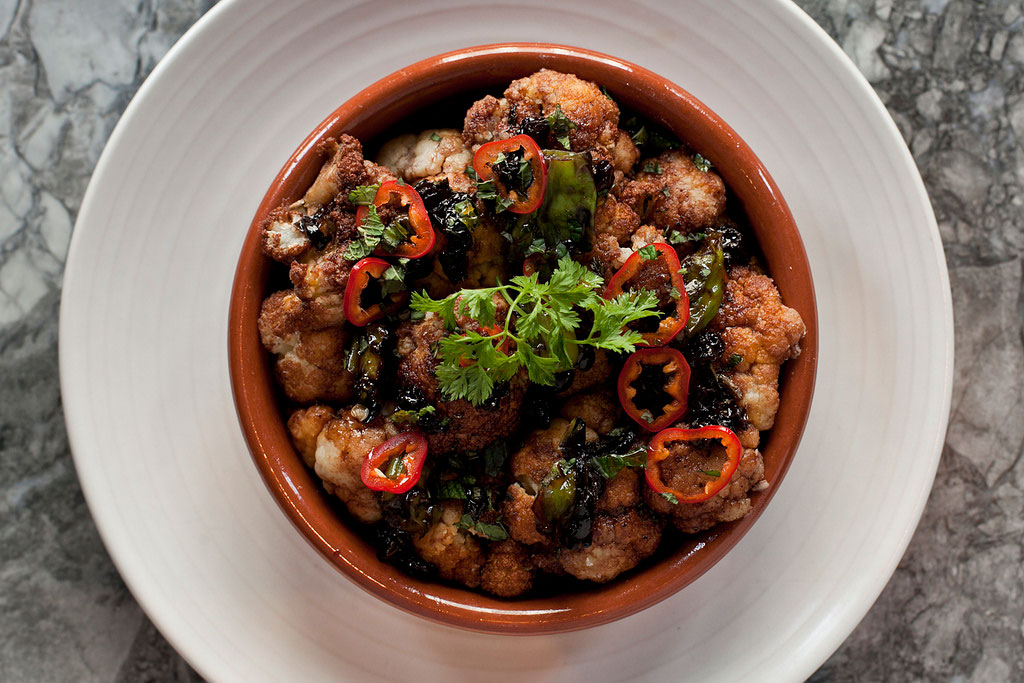 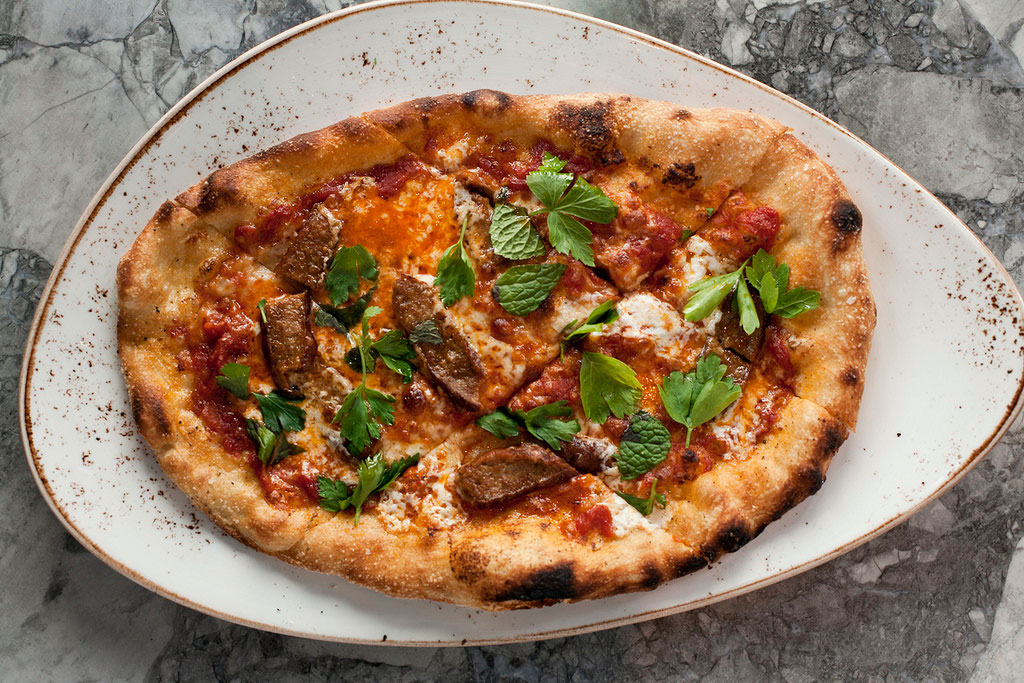 Flay casts a wider net, serving tuna stuffed piquillo peppers alongside chile-spiked Greek yogurt and Roman-esque flatbread pizzas ($16-$17). It's all average enough fare that ends up doing about as much for the Mediterranean as Tao does for Asia and Lavo, for Italy, which is to say not a lot. Call it a summer blockbuster of a restaurant, where safe flavors reign supreme. Flay's calamari with favas might as well be seitan with favas, and his garlic shrimp ($15) are perfect for those who prefer their crustaceans to taste as if they were genetically crossbred with styrofoam.

It does about as much for the Mediterranean as Tao does for Asia and Lavo, for Italy, which is to say not a lot.

Like any proper blockbuster, Gato, with its 3,640 square feet, is a large, well-oiled machine. Bartenders work their way through the crowds quickly and with aplomb; their heavy pours of wine help too. For those with reservations, expect around two feet of space between the tables — not quite Eleven Madison Park-style business class but definitely economy comfort. Gato might be one of New York's least cramped casual restaurants. 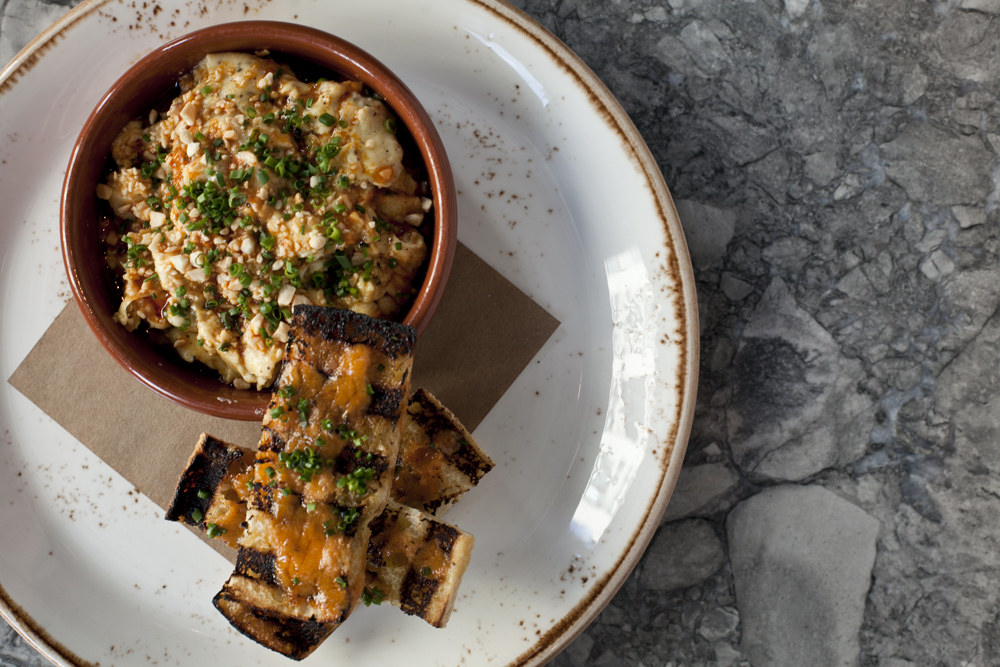 Still, I'll sit at the bar, order a $13.50 Rioja "Biga" Luberri (served at cellar temperature), and pair it with Flay's stunning scrambled eggs ($14), which get a whisper of heat from Calabrian chili oil and a hint of funk from goat cheese. Then I'll try the crab risotto ($18), which is decent as a crab dish, less so as a risotto — the arborio grains are overcooked. Also overcooked is the octopus, whose wilted exterior shows little sign of having been crisped on the griddle. The insipid tentacle is edible enough as long as you stay away from the tangerine sauce, which is about as tasty as a frozen can of orange juice concentrate.

That brings us to perhaps the biggest flaw in Flay's food: his propensity for sugar, and not in a smart agrodolce way. He tops his chorizo with apricot mostarda — which in the right hands can balance the fruit's sweetness with a sinus-clearing sting but here is all candy. His blue cheese-topped strip steak, boasting gorgeous char on four sides, is slathered in a honey-spiked red wine sauce that would be better suited for pancakes. Even the tarte tartin, with all its complex caramelization, makes the throat well up from sugar shock just like a Cinnabon.

It all makes me wonder whether Flay is sometimes catering to an Applebee's or TGI Friday's crowd, where guests with a high tolerance for sweetness expect bland meats to get their kick from the likes of Jack Daniel's glazes and such. Then again, there's no accounting for Gato's cumin-scented pork porterhouse, whose flesh contained about as much swine flavor as a can of supermarket tuna. And the tarragon chicken, with little trace of fat, tasted like what happens if you cooked the bird by leaving it out in the sun for a few days. 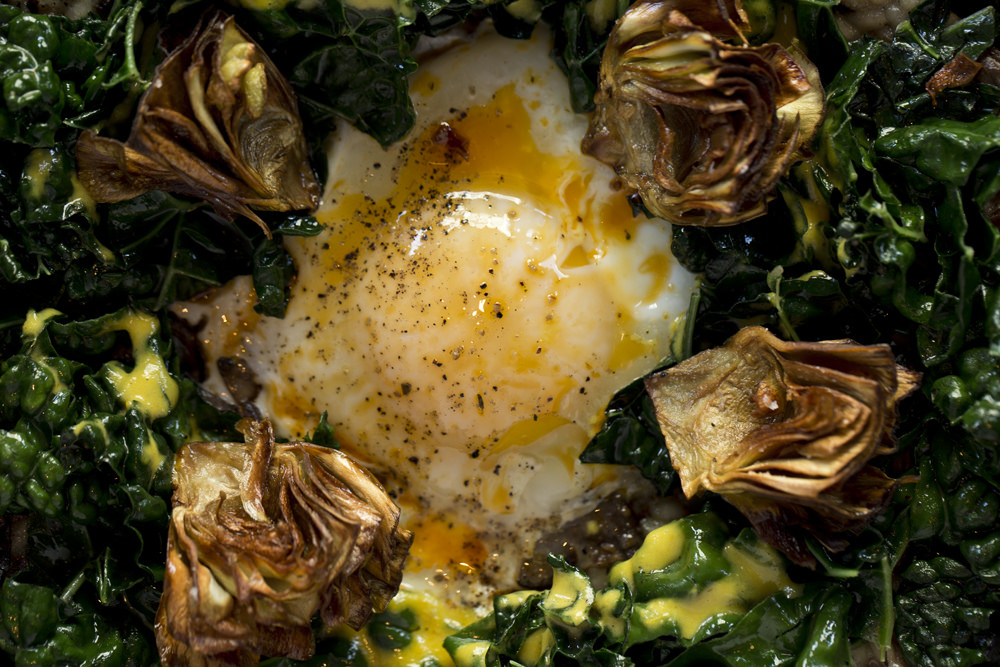 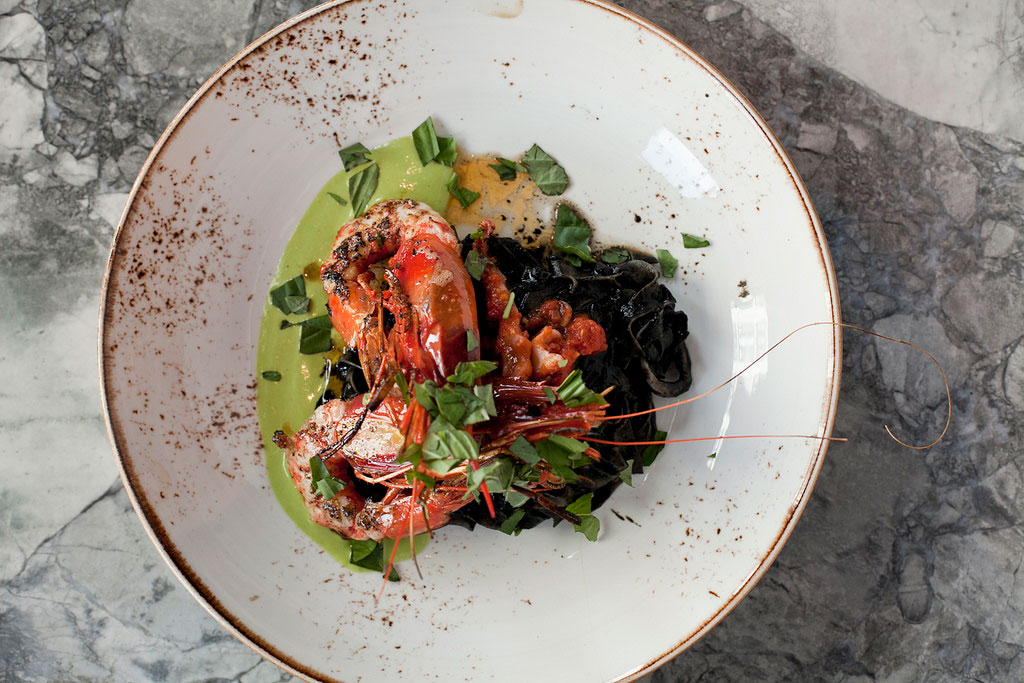 Stick with the crab crostini and the eggs, as well as the beef tartare, which stings of pickled fresno chiles. The go-to entree is the kale paella ($27), where crusty calasparra rice packs a world of deep mushroom flavor. Pair that with the carrots — an epic roast of earthy, vegetal awesomeness ($10). The squid ink pasta is decent too, not for the heavy handed squid ink, the limp "fettucine" [sic], or the guacamole-like green sauce, but rather for the two giant carabinero shrimp. They alone would justify the $34 price tag.

You can and should skip the ho-hum desserts, but you'll be sent out some sweets whether you like it or not. The petits fours are undercooked biscotti meant for dipping in sweet sherry. Yawn. In this exceedingly boring year for New York City restaurants, Gato might be proof that boring is precisely what the public wants.

Our review of Gato

Cost
Under $100 per person. Bar snacks are three for $17; starters are $12-$18; mains are $27-$34.
Sample dishes
Beef tartare, crab crostini, scrambled eggs, kale paella, roasted carrots.
What to drink
Avoid cocktails. Try the proper selection of sherries by the glass ($6-$16). Champagne (Duc de Romet) is $24 by the glass.
Bonus tip
Prime time reservations are snapped up 3-4 weeks out. Lounge tables (a first-come-first-serve free-for-all), and bar seats are for walk-ins.