While most modern bistros pride themselves on their local sourcing of ingredients, they go on to incorporate them into ceviches, Cobb salads, steaks frites, and further culinary notions that originated elsewhere — and by elsewhere I mean places other than our own stretch of America's Atlantic seaboard. Now Patti Jackson seeks to redress that by featuring not only ingredients sourced from area farms, but recipes, too, that originated locally in the historic past — or might have done so. She takes as the theme of her new restaurant Delaware and Hudson an interlocking canal and railway system begun in 1825 for the purpose of transporting anthracite coal from Pennsylvania to New York City. The menu's approach is relatively unique — the only place I can think of with a similar attitude was Choptank, which tried to replicate traditional Maryland cuisine in 2010 on Bleecker Street.

Jackson takes over the old Egg space in Williamsburg, a concrete-clad box that has been nicely lined with color photographs suggesting the menu's raw materials: sugar-snap peas, forest mushrooms, red radishes, a small pink pig. Tables are decorated with sprigs of magenta flowers, but the décor seems spare, and the sign in the window, temporary. The prix fixe-only menu ($48) includes four courses and offers virtually no choices other than in the third, which lets you pick one of three entrees. 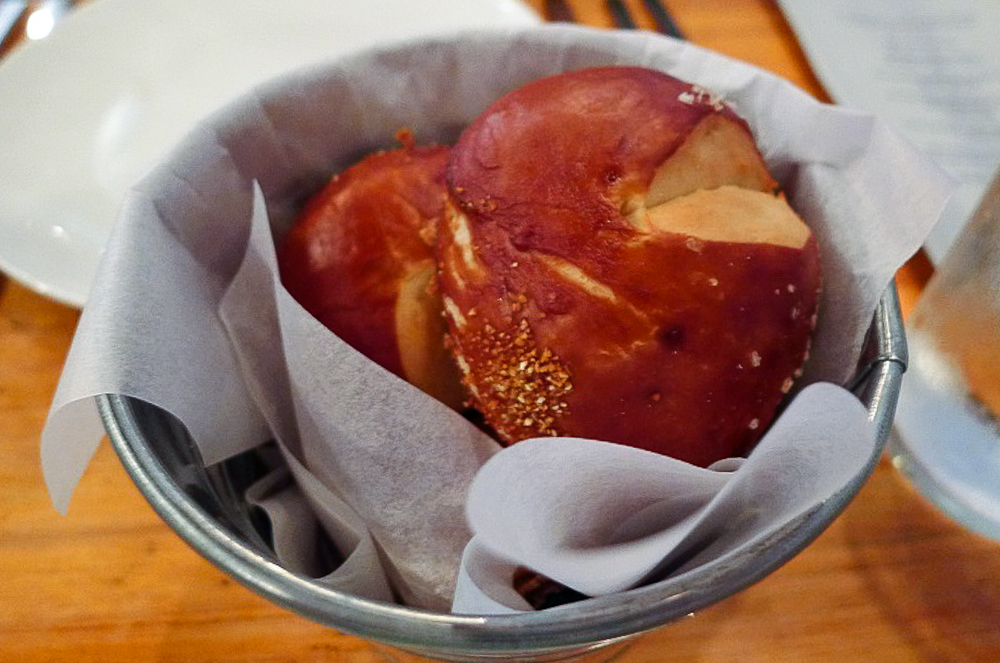 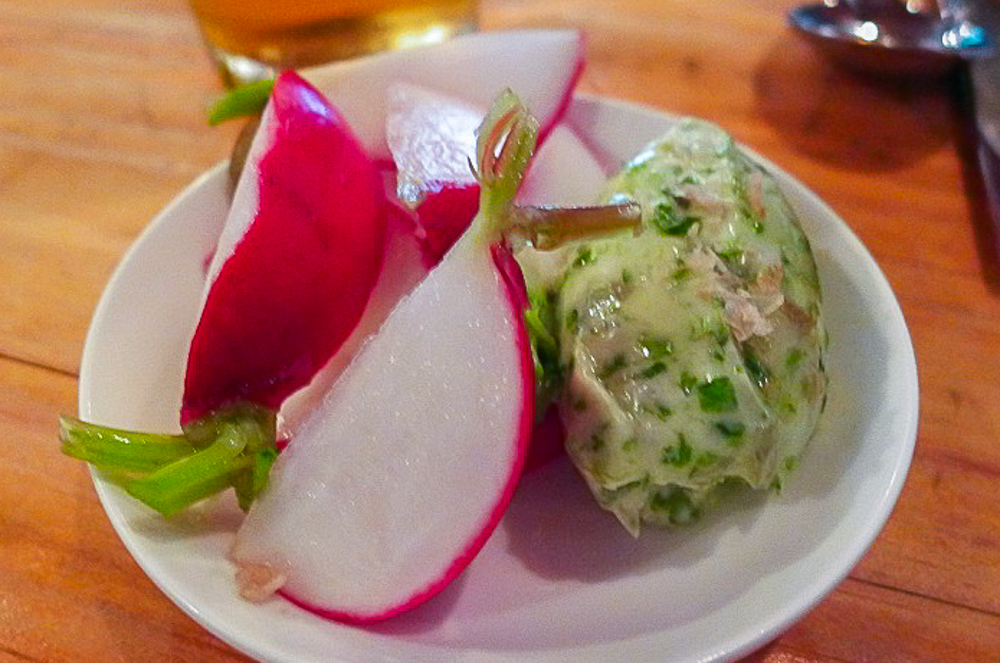 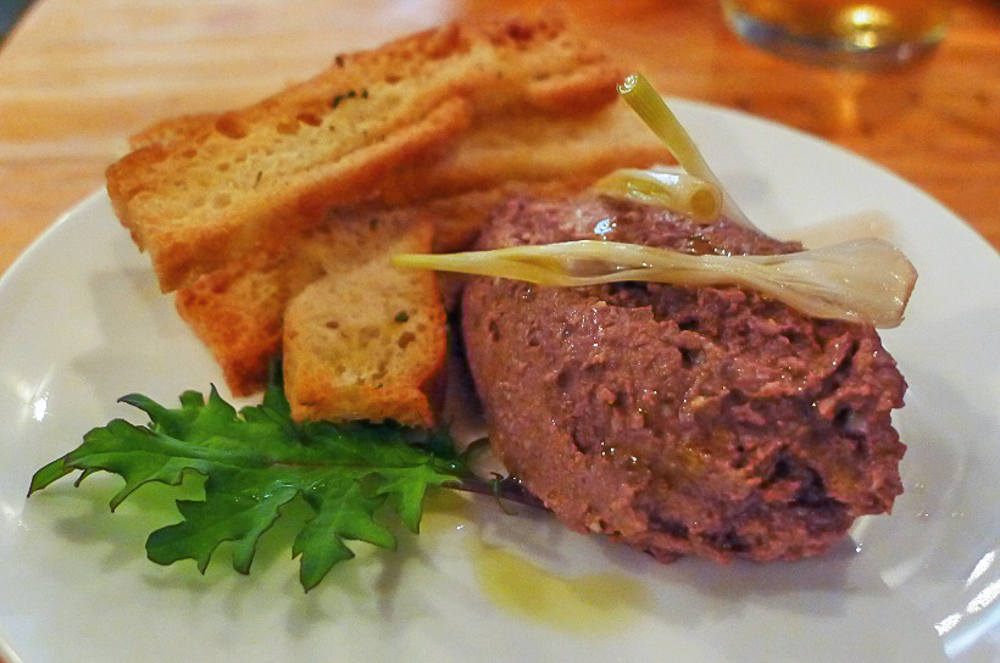 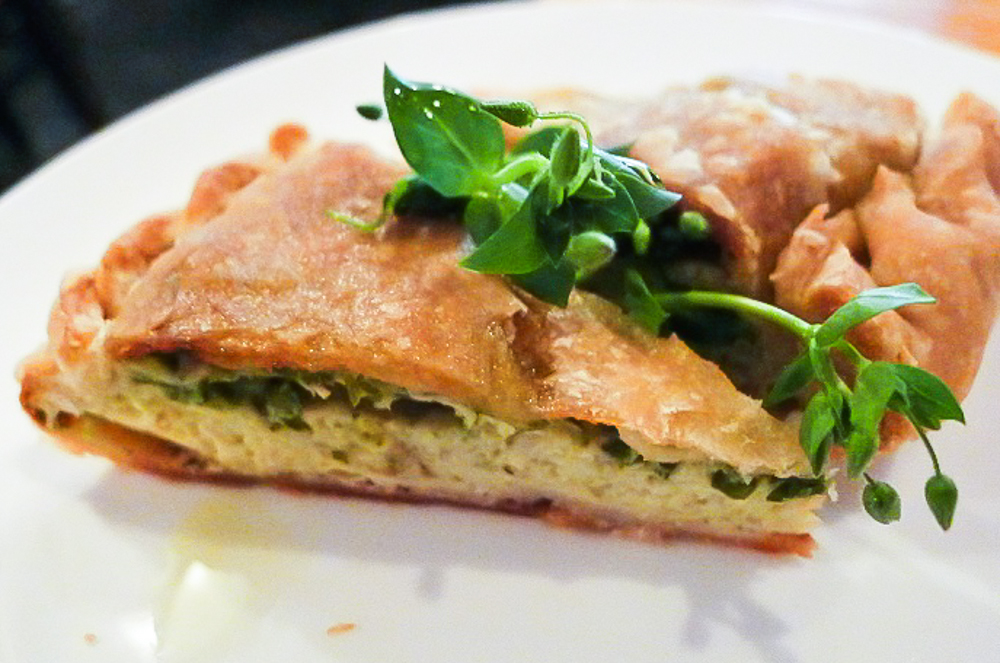 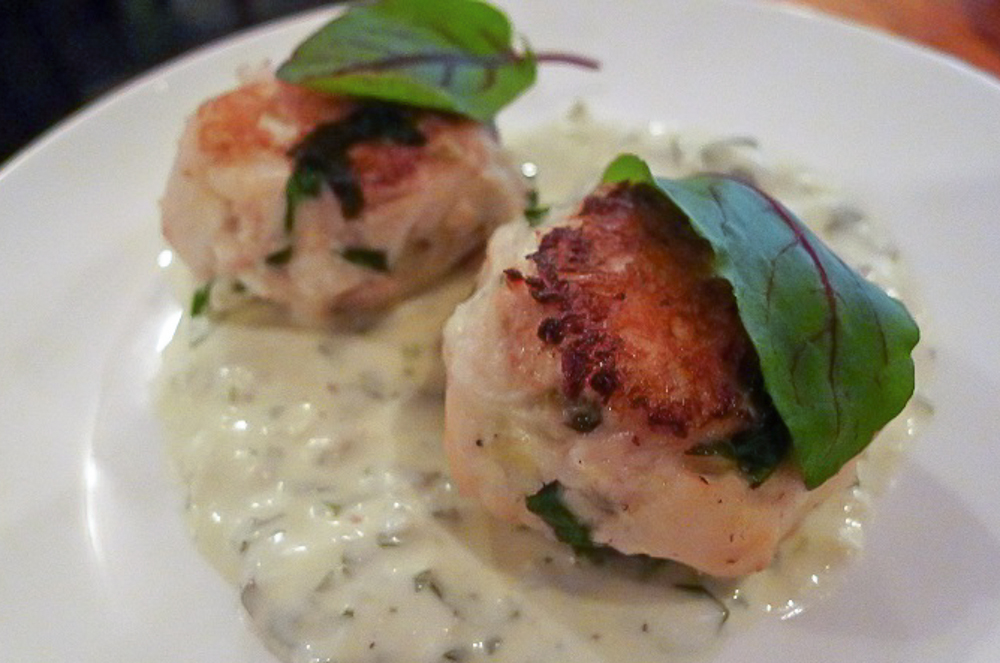 The meal begins with a bang. Five shared apps appear on the table one after another, in buckets and ganged up on communal plates: wonderful pretzel rolls, sweet and squishy inside, deep brown and salt-crusted on the outside; notably un-bitter radishes served with plenty of ramp butter; wedges of double-crust chickweed pie, with a wild-greens-and-goat-cheese filling; a quenelle-shaped blob of chicken liver mousse with toasts and pickled scallions; and, recalling Baltimore's crab cakes, striped bass fritters accompanied, not by French remoulade, but by a milder watercress cream. Though I found myself applying the ramp butter to the pretzel rolls instead of the radishes, the appetizer course was stunning, and left my companion and me panting with pleasure, but with a feeling already of near-satiation. 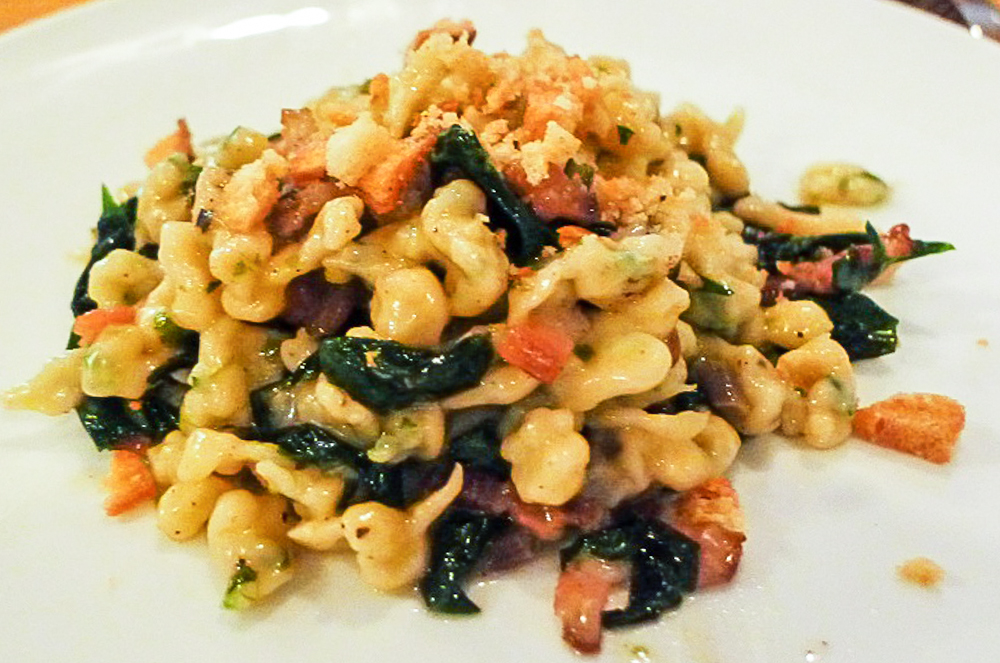 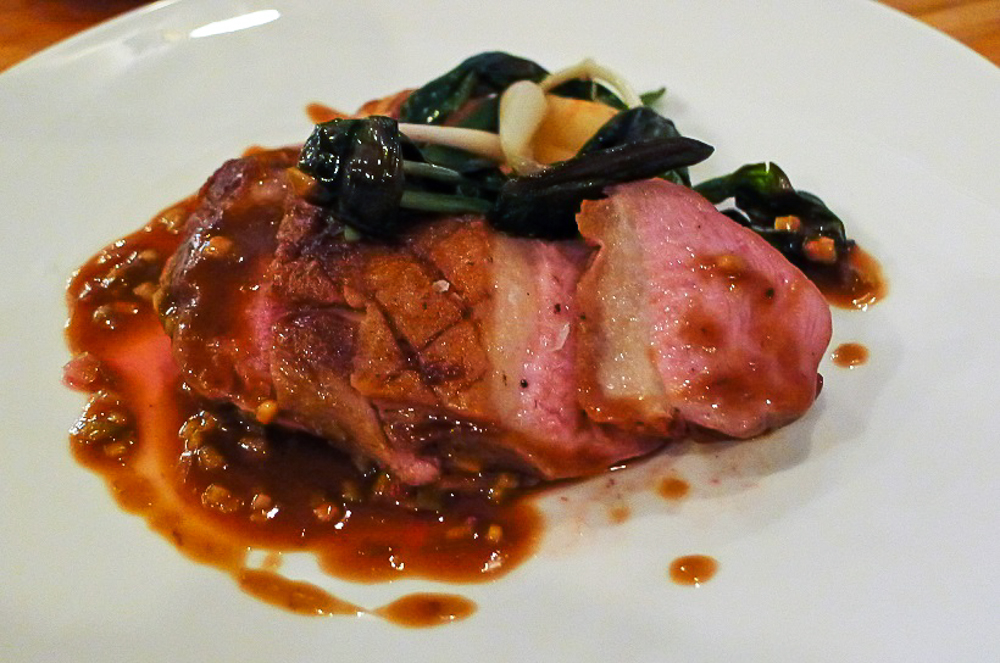 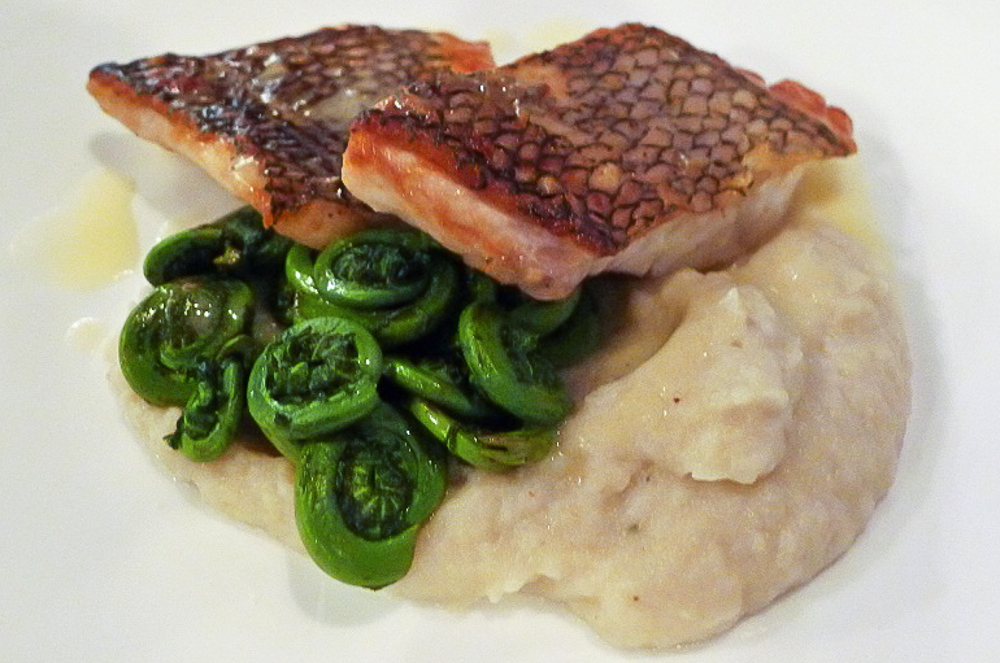 The second course — a heap of spaetzle ramified with ramps, tiny crunchy bread croutons, and optional bacon — seems like starch in search of an entrée, or a thrown-together casserole you might have made for yourself at lunch, and takes up space in your stomach where the next course should go. The third and main course featured a return to the brilliance of the first. Of the three entrees offered, we picked duck — a crisp-skinned breast cooked medium rare so the rich juices rendered and oozed — sided with mashed parsnips, sautéed ramps, and novel nuggets of rhubarb treated as a vegetable rather than as a dessert ingredient; and sea bass, pan fried in two swatches, perfectly executed and served with a nice heap of fiddleheads. A third entrée, the one we skipped, was a vegetarian ensemble of polenta, fried egg, ramps, and asparagus — it seemed a little too much like the second course, though who can resist polenta topped with a runny egg? 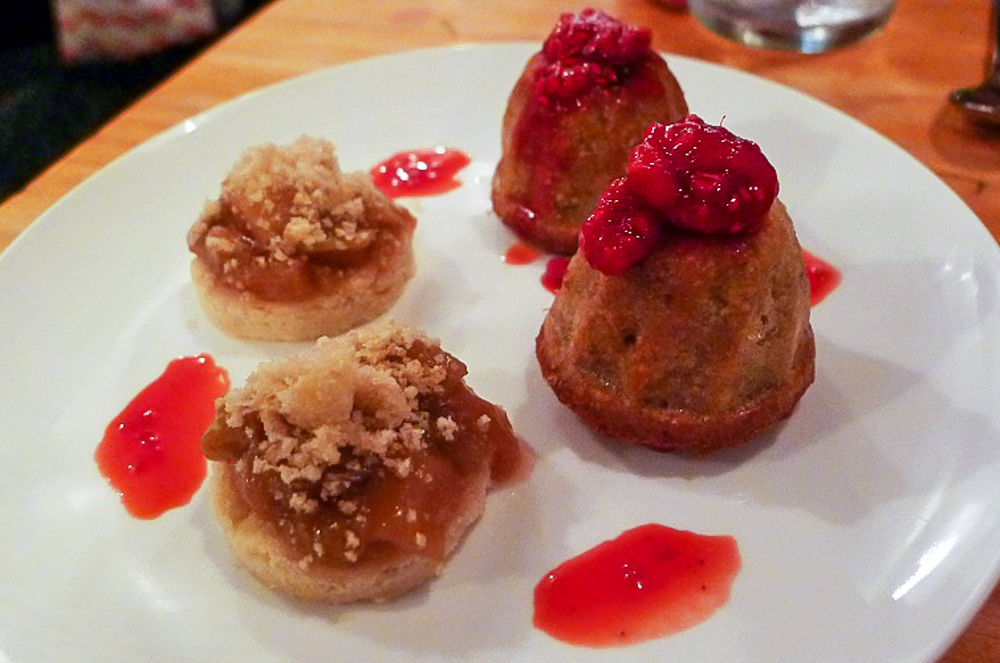 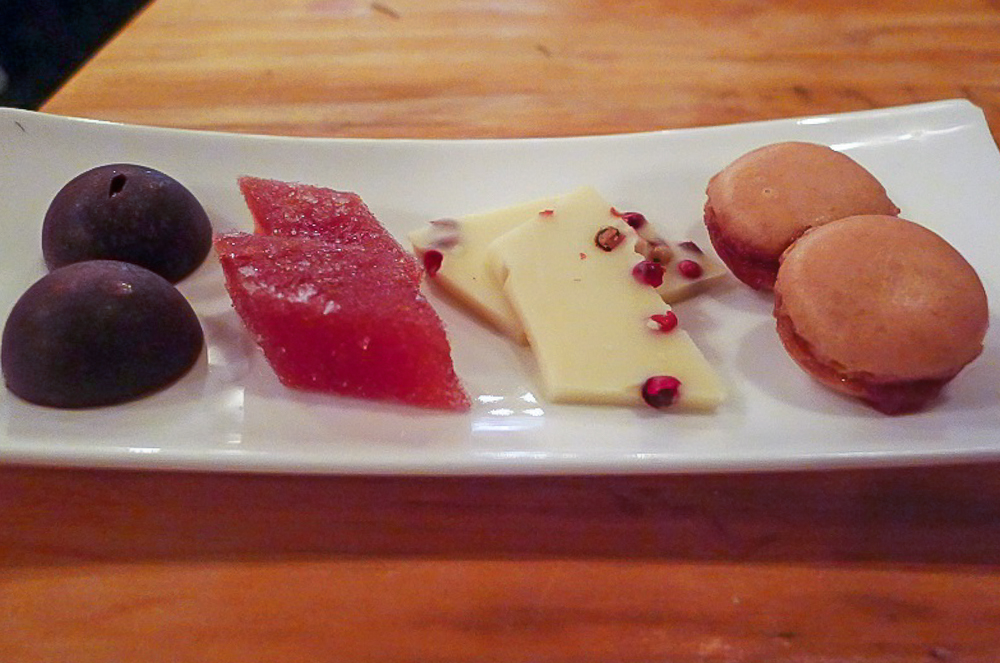 Before becoming an executive chef, Pennsylvania native Patti Jackson was a celebrated pastry chef at restaurants like Le Madri and Alto, so the next course was highly anticipated. It turned out to be perhaps a little too much on the wholesome side, a buckwheat cake shaped like a bell with a dab of fresh raspberry, and a coin of shortbread moistened with rhubarb crumble. The cake cried out for cream, while the shortbread could have been crumblier. These shortcomings were redressed with a surprise second dessert of fruit jellies, pink-peppercorn-studded white chocolate, and sea-salt caramels.

Altogether, there were too many ramps on the menu — four out of nine savory dishes contained this overhyped ingredient. The prix fixe also included too much food: possibly intended to justify the $48 price tag, which zooms to about $80 after beverages, tax, tip, and a final cup of coffee. Nevertheless, the bill of fare is a breath of fresh air, and the apps one of the most memorable dish sequences of the current season. But you can't help wondering, would Delaware and Hudson be more successful as a small-plate place, or with a smaller and slightly cheaper prix fixe? Still, in its second week of service, for a seasonal, veggie-centric, and locavoric menu, there's currently no better place in Williamsburg.