Is Russ & Daughters Charging Too Much for Its Caviar?

Share All sharing options for: Is Russ & Daughters Charging Too Much for Its Caviar?

I try to eat good caviar at least once a month or so — one must live, non? Thing is, there aren't a whole lot of casual New York restaurants serving high-end fish roe, which is odd when you consider how many middle of the road Italian joints will push $100 white truffles come October. If you want quality caviar you typically have to hit up fancy pants Midtown spots like Le Bernardin, Marea, Petrossian or Caviar Russe. The big trend of the past decade, where everyone is supposed to eat serious food in seriously scaled down digs to save a few bucks — that hasn't really hit the caviar scene in any big way.

There are, of course, exceptions: Mari Vanna, The Dutch, and most recently, Russ & Daughters Cafe, a sit-down spinoff of the famous retail store that charges very fair prices for its fish roe. No jackets or dress pants required — this is a cafe after all. No flower arrangement get in the way of your luxurious edibles. Just good food and good service.

So I dropped by on Monday and ordered 50 grams of transmontanus roe, the cafe's most affordable offering of high-end sturgeon roe. It was gorgeous stuff. The color was nearly black, with spots of olive and grey here and there. The beads separated from one another with ease. They bursted with just a soft press of the tongue. The flavor was nutty and rich at first then quickly changed to a clean metallic brine that went on for a good 10 seconds.

This was all served with egg whites, egg yolk, chives, crème fraîche and a pile of the worst blinis I've ever encountered — dry, lukewarm, chewy, and bland. But no matter. I'm not here for accoutrements. I'm here for the roe, which was spectacular. The pearls were so rich it took me a good hour to finish them all. This was all paired with a dill infused vodka martini, stirred, and a few pickled vegetables.

If that's not a perfect meal I don't know what is. If only the price was right.

The transmontanus roe is $175. That's a lot of money, even for caviar. The same amount of the same roe is priced $55 lower in the Russ & Daughters retail store; the roe is also significantly more expensive than the entry-level sturgeon caviar at Le Bernardin ($140) or Marea ($110), Costata ($100), or The Dutch ($95).

There is an explanation for this. Russ & Daughters serves its roe in 50 gram portions, while the other venues serve 1oz portions (roughly 28 grams). It's the equivalent of Russ & Daughters serving you a steak for two instead of a steak for one, even though it's a heck of a lot easier to portion out fish roe, which is naturally separated into hundreds of separate eggs, than it is to butcher a big steak, which requires swordsmanship. So while Russ & Daughters gives you a lower starting price per gram than any of the above except The Dutch, it's also where you'll be likely to spend more due to the larger portion.

What's also curious is this: Among the three big caviar purveyors with restaurant components, Russ & Daughters Cafe charges some of the highest markups, hovering around 22-31 percent at the 50g level for the good stuff. That means Siberian sturgeon, $120 in the retail store, will cost $175 in the cafe. The upcharges for lower-end hackleback (aka "American sturgeon") and paddlefish are even steeper, at 48 percent and 52 percent, respectively.

At Caviar Russe, by contrast, 50g of Siberian sturgeon will cost you $130 both in the retail store and in the Michelin-starred culinary establishment. In fact all of Russe's restaurant prices are at parity with the in-store offerings, I'm told. There's also a 25g level that's a more manageable (and affordable) fit for solo diners.

Just the same, Petrossian doesn't typically mark up its restaurant caviar more than $7 above its retail price; it also offers roe at more reasonable sizes as well — $97 for 30g of its highest grade of transmontanus, or $159 for 50g; a lower price than Russ & Daughters no matter how you spin it.

But really. Would we rather spend our money at a cool joint on the Lower East Side or at some stuffy Midtown institution? There's another point in favor of Russ & Daughters. Call it the cost of cool; remember there aren't a whole lot of casual caviar spots, so there's your pricing power right there. Add tax and tip the equation, and you're at $329 for the gorgeous golden gueldenstaedtii roe, excellent Israeli caviar that will run you just $200 at the retail shop. And it's at this point when you wonder whether you should be eating this stuff at home. 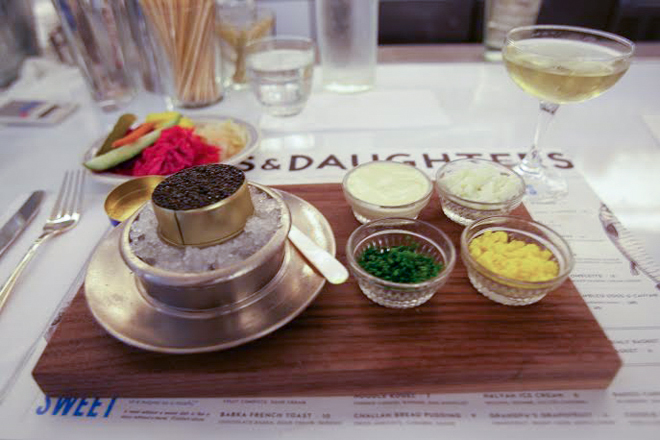 Think of it this way: When you go out to a restaurant, you're okay with paying a bit more for wine because maybe you're drinking that lovely bottle in stemware you can't afford to maintain, with food you don't know how to cook (or don't have time to), and in a room that's cleaner than your overpriced Williamsburg studio. And if it's a vintage that's hard to come by, maybe you're okay with an even higher markup, as a finder's fee of sorts.

But with caviar, you're paying a markup on a widely available product served in its own tin. There's often no manipulation or culinary skill. You simply open it, pair it with a martini or Champagne, and then witness the expression on peoples faces while they watch you eat the most expensive thing on the menu. Whether the last thing is a plus or a minus depends on what hedge fund you work for. 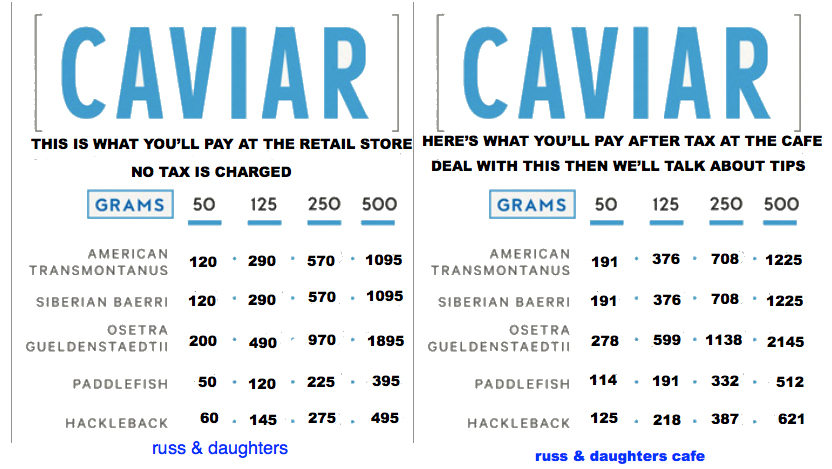 So there's not always a whole lot of upside to eating this stuff at a restaurant, even if the markup is at parity like at Caviar Russe, because you're still laying down an extra 20 percent tip, plus sales tax. Take it home instead and not only is there no gratuity, but there's also no tax, which isn't levied on fish roe purchased at retail.

Heres How Much (More) Youre Paying for Caviar at Russ & Daughters Cafe. | Create Infographics

Still, for those who'd occasionally like a caviar night out on the town, and admittedly I'm sometimes one of those people, it would make things easier on the wallet if the Russ & Daughters folks offered a 30g option and levied a more reasonable markup for the entry-level roe. In the cafe's defense, the markups stay within the $30-$80 range as the portion size increases, which means the more you eat, the lower the upcharge. So at 500g (over a pound), the gueldstaedtii is just 3.8% more expensive than retail. The cost, however, is $2,145. L'chaim.
· All Russ & Daughters Cafe Coverage [~ENY~}