While Mexican fare that comes from carts and trucks can sometimes be lackluster compared to the same food purchased from taquerias, such is emphatically not the case with Tacos El Bronco, a van often parked across the street from the Jackie Gleason Bus Depot and just uphill from the venerable Melody Lanes in Sunset Park. At the southwest corner of 38th Street and 5th Avenue from around noon till 5 a.m. the next morning, Tacos El Bronco specializes in the smallish, double-tortilla tacos called taquitos, the best of which are made with al pastor pork tidbits, bathed in the pineapple juice that has dribbled down over meat as it roasts on the vertical spit. In traditional Pueblan fashion, the garnish is limited to chopped onions and cilantro, yet Bronco builds on this by siding an order with grilled green onions, cukes, and red radishes, evoking the flag of Mexico in vegetable fashion. 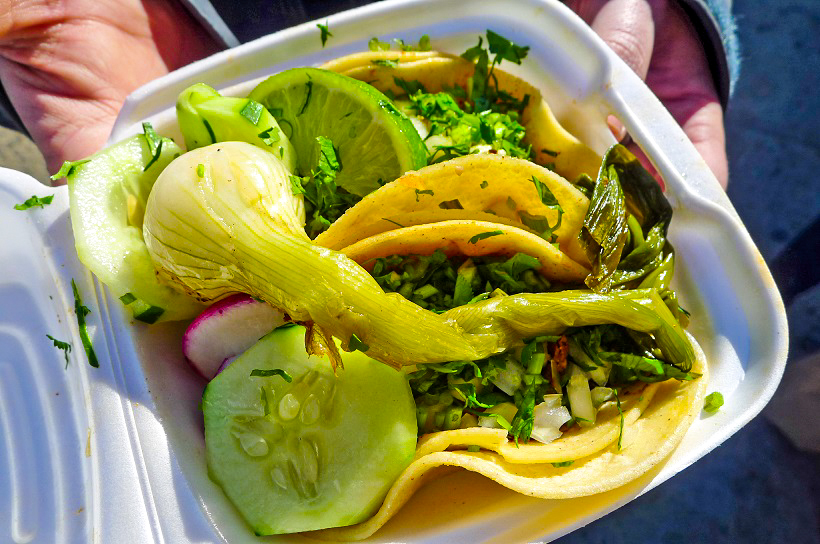 Don't get me wrong, there are plenty of other great things available from the truck, almost too many, including cemitas and tortas; Mexican breakfasts that include classics like huevos rancheros and chilaquiles topped with fried eggs; masa antojitos such as sopes, huaraches, and quesadillas; Mex-Tex classics like nachos, in addition to a full line of burritos — and believe me, you haven't lived till you've tried a tripe burrito. But most folks stick with the taquitos, because they're so damn good and so cheap (most are $1.50 each). A dozen fillings are available including a nicely chewy carnitas, pig stomach (buche), fiery chicken tinga, and lamb barbacoa. (38th St and 5th Ave, Brooklyn). 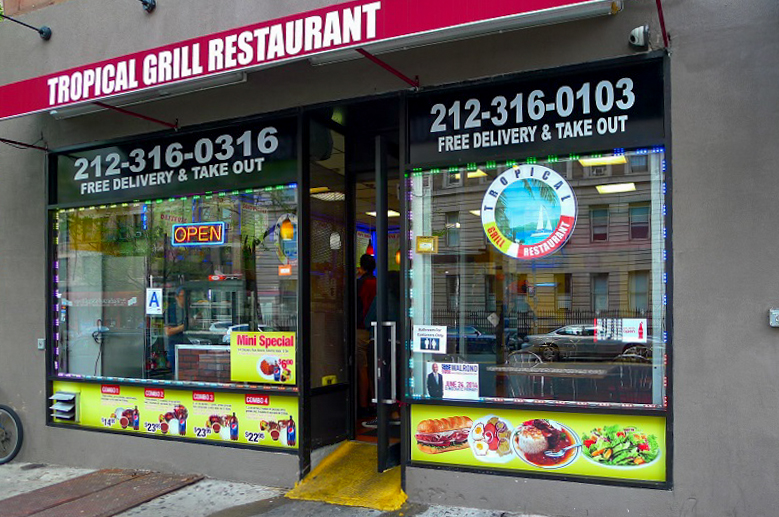 In certain neighborhoods you can still get astonishing deals in food, and sometimes even sit comfortably while you eat it. Such is the case with newcomer Tropical Grill Restaurant in the southern reaches of Harlem, located in what is mainly a West-African neighborhood. This Dominican eatery, which replaced a long-running Jamaican in the same spot, begins your order with a plate of rice (yellow or white) and beans (red or black) so humongous it would already totally fill you up. But next comes the main course, ladled over the rice in dazzling profusion. The other day I enjoyed baccalao, a colonial-era stew of salt cod, tomatoes, and potatoes, with the fish component retaining its firm texture despite the stewing. 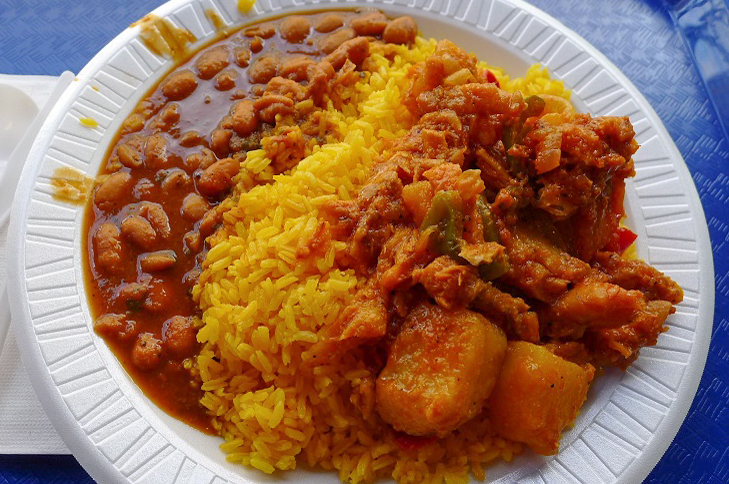 This tour-de-force feed, which falls under Lunch Specials, is $6, and for the same price you can score unctuous pork chicharrones, rice with shrimp and chicken (somewhat Chinese-y), short ribs of beef, fricasseed chicken, or "goat meat." 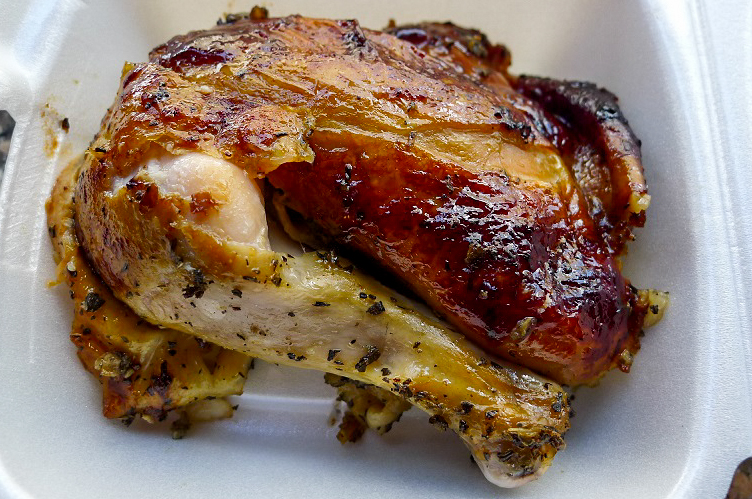 Another great deal is the quarter rotisserie chicken rubbed with herbs. Many patrons of the Tropical Grill dash in especially for this viand, which comes without the distracting presence of rice and beans at the bargain price of $2. Now, that's cheap. (164 W 116th St, 212-316-0316). 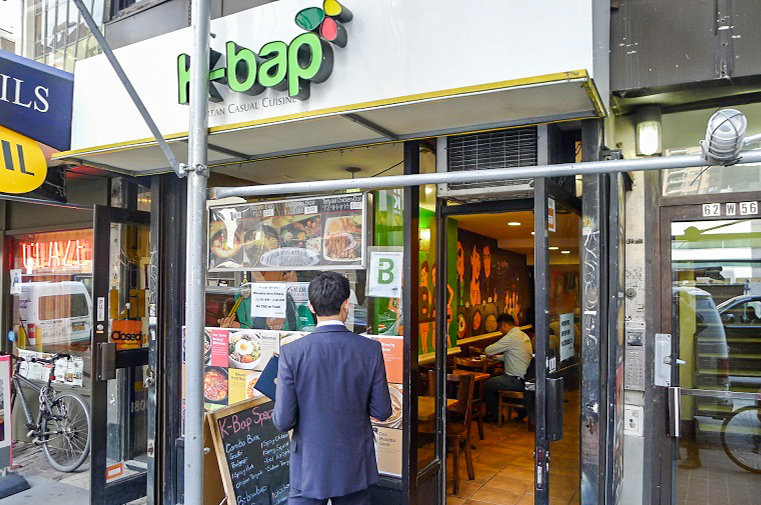 Discount Korean food is relatively hard to come by, partly because a Korean meal involves all sorts of side dishes and accoutrements. That is why K-Bap is a resource worth knowing about in the vicinity of Central Park South, where budget dining options are relatively few and far between. The narrow storefront — which seems to be in a perpetual state of disarray — offers a number of set meals in the $6.95 to $13 range. 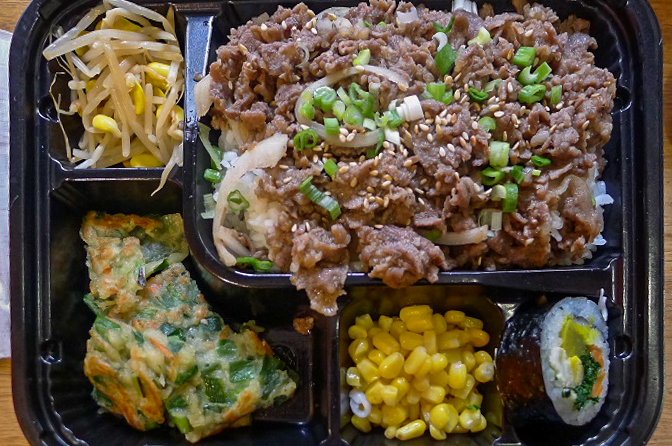 At the lower end are ramen and the sweet-potato noodles known as jap-chae; at the upper end are bulgogi ($10, shown, serve yourself, no tax charged) and galbi, the latter two in fully outfitted box meals including pajeon, beans sprout salad, corn, slice of futomaki, and a generous, sesame-seed-dotted serving of meat in sweet/salty sauce over a ton of rice. You won't go away hungry. (62 W 56th St, 212-397-9104)

· All Coverage of Cheap Restaurants [~ENY~]
· All Posts by Sietsema [~ENY~]