Yesterday, Robert Sietsema gave three stars to Bhojan in Curry Hill. Here's a roundup of the rest of the week's big reviews:

Pete Wells is impressed by Alex Raij and Eder Montero's eclectic menu at El Quinto Pino in Chelsea: "Among the bar sandwiches tightly wrapped in paper is a visitor from New Orleans, a po'boy with closely packed, terrifically crunchy fried squid legs at its core. Another is a fortified Cubano, in which the ham and crisp pickle have more oomph than usual, the cheese doesn't taste processed, for once, and the braised pork is supplemented with a red wallop of blood sausage." Wells gives the restaurant two stars. [NYT]

Michael Kaminer gives three stars out of five to Astoria gastropub Front Toward Enemy. On the chicken: "Front Toward Enemy's kitchen somehow coaxes complexity from soporific components. The bird's firm and juicy, the potatoes rich and a cabbage-bacon shred-up tastes both meaty and light. A pool of Granny Smith puree makes an addictive condiment." [NYDN]

THE ELSEWHERE: Gael Greene has mixed feelings about Narcissa in the Standard East Village hotel, Amelia Lester digs the vegetarian fare and craft beer at Pickle Shack in Park Slope, and Ligaya Mishan is pleasantly surprised by the quality of the food coming out of the kitchen at tiny LES newcomer El Rey Coffee Bar and Luncheonette. 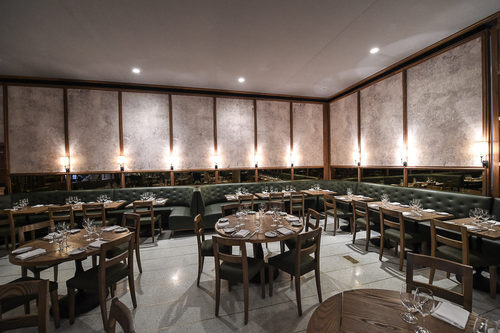 [The Gander by Krieger]

THE BLOGS: Immaculate Infatuation's Andrew Steinthal gives an 8.2 rating to The Gander, Joe DiStefano discovers customizable dumplings at Tianjin Dumpling House in the Golden Shopping Mall, Goodies First has a fun meal at Peking Duck House, The Food Doc files a detailed recap of a recent dinner at Blanca, The Pink Pig samples the pizza and wine at Archie's in Bushwick, and NY Journal gives two stars to Luksus in Greenpoint.