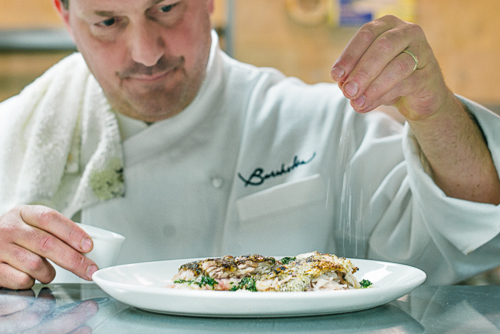 "The great thing about porgy is that it is a species that is plentiful, not endangered and fully sustainable" says chef Dave Pasternack about the fish that he grills whole at Barchetta, his newly launched Italian seafood trattoria. To illustrate this point, he tells the tale of a dragger boat captain who just last week caught 52,000 pounds of porgy in a single seven minute tow. "It was a crazy picture," says the chef of the photo he saw of all the stacked up porgy. That was caught off of Cape May, NJ but Pasternack gets his porgy from Montauk, LI. "I look to buy them at one and half to two and half pounds, but because porgy has a big collar and head, I like to give a slightly bigger fish per person," he explains.

Pasternack's general advice is that due to the bone structure, "anytime you can grill larger fish you should." He thus offers the porgy at $26 per person but recommends getting larger fish for two for the best experience.

Because of the freshness of the product, Pasternack chooses to simply season and grill the porgy, accentuating the natural flavor of the fish. He stuffs the whole porgy with lemon, Italian parsley, and rosemary. He then seasons the exterior with salt, black pepper, and olive oil before grilling the fish over lava rocks. It's then served either whole or filleted, depending on the customer's preference. Pastrnack is ambivalent about saucing the finished fish. "I might serve a caper oregano pesto or salsa verde if I feel like it," he quips.

Watch as Pasternack stuffs and grills the fish:

Editor markup for Dave Pasternack's Orata Americana at Barchetta. This is only visible in the story editor.