In the mid-90s, the Jersey City neighborhood that came to be known as Little India was in its formative stages. A two-block stretch of Newark Avenue that descended steeply toward the Meadowlands swamps hosted a small collection of groceries, jewelry stores, paan parlors, and sweets shops anchored by Singh's, a teetering clapboard variety store in whose fantastically cluttered aisles Garbage Pail Kids cavorted with Hindu deities. Best of four restaurants was Chowpatty, named after a popular beach in Mumbai. Indeed, the menu was heavy with the beach snacks called chaats – flavorful heaps of fried noodles and vegetable fritters splatted with yogurt and chutneys.

But perhaps more important, the menu specialized in the food of Gujarat, a partly rural, partly industrial state on the west-central edge of the country bordering Pakistan, a figurative stone's throw from Mumbai. The food was a revelation. We learned, for example, that Gujaratis relish cornbread, yams, black-eyed peas, and greens just like American Southerners; but they also consume more exotic vegetables such as tindora – a pinky size cucumber – and ridged gourds called tori. Like many of the new Gujarati immigrants, the restaurant Chowpatty was vegetarian, and it catered to a religious group known as the Jains, whose concern for living things was so complete, they eschewed garlic and onions so as not to harm the insects that infested the underground bulbs of those plants. 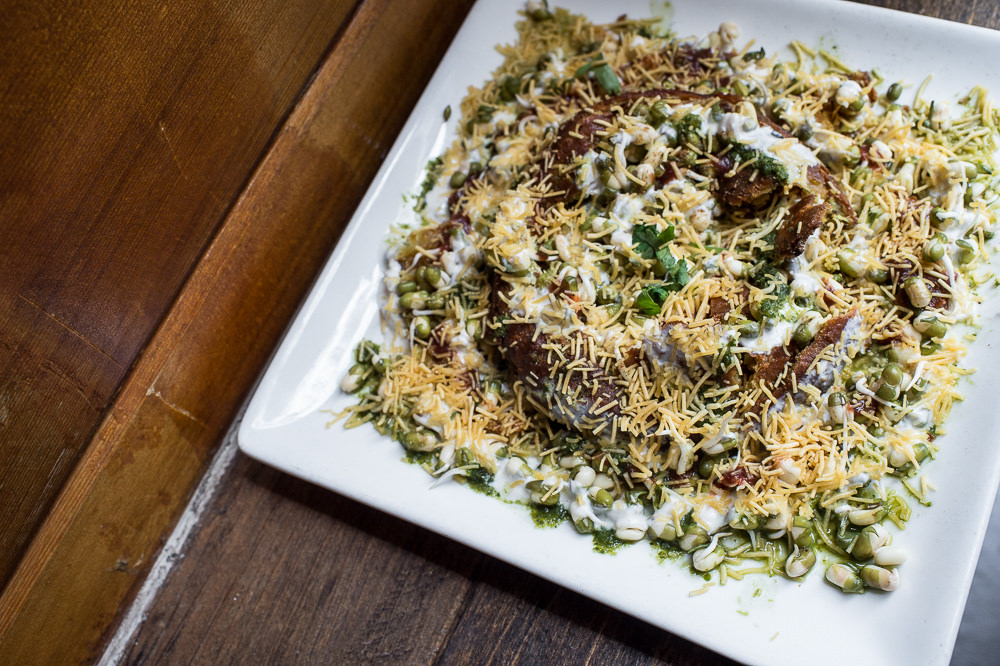 Chowpatty has been shuttered for 15 years, and the Gujaratis who once thronged Little India on weekends have largely dispersed in favor of a South Indian crowd who prefer the cuisines of Hyderabad and Chennai. But thankfully, the fascinating Gujarati menu persists in Manhattan's Curry Hill in slightly upscale form at Bhojan. As with the Jersey City restaurants of yore, its strictly vegetarian bill of fare also includes Mughal dishes from northern India, so you can enjoy familiar classics such as saag paneer, daal makhni, and navratan korma. More about those later.

Foremost among a new generation of restaurants on Lower Lex showcasing regional Indian cuisines, Bhojan mounts a bar in front with a full liquor license, leading to a passageway that skirts jazzy modern bathroom facilities. (A peek-a-boo glass door may dissuade you from actually using them.) The rear dining room is all brick and mirrors; it might be an Irish pub, except for a couple of quirky design elements, including a ceiling array of karahis (cooking vessels like copper woks) and glass bottles incorporated into medieval-looking chandeliers. 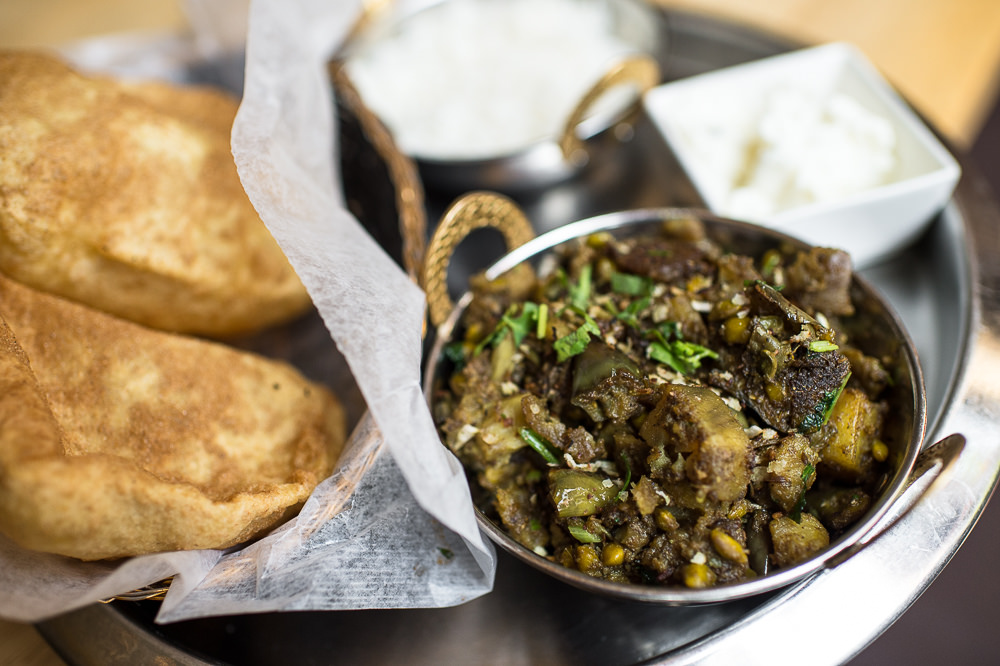 Though the restaurant is Hindu-identified (Swami Sivananda is linked on the website), the menu offers to prepare dishes following Jainist dietary strictures, which means spices like asafetida, a tree resin, can be substituted for onions and garlic. Just like old times in Jersey City!

First, the uniquely Gujarati stuff. Simplest and perhaps most arresting is Gujarati kadhi ($8), warm yogurt blended with chickpea flour to perfect dribbling consistency, so that a small bowl will soak a good-size plate of rice. This mellow treat is typical of the everyday Indian fare rarely glimpsed in New York restaurants, and the waiter is likely to warn you away, thinking you'll be put off by its plainness. Persevere! A Punjabi version of the same dish, amplified with tidbits of fried dough and flavored with Asian cumin, expands on the theme.

More immediately satisfying is pumpkin sabji ($13), a bright orange stir-fry of squash chunks prettily dotted with black mustard seeds and glistening with an almost-gooey sauce. Another worthy selection is a puree of spinach and mustard greens that sounds like a designer label: Sarson da saag arrives heaped with matchsticks of raw ginger, as deeply green as the Meadowlands in early summertime. Strangest of the Gujarati standards are globe-shaped fritters of fresh fenugreek (methi gota, $6), an herb with a loamy flavor hard to describe, also used extensively in Egyptian cooking. (Disclaimer: on one occasion when we ordered methi gota, they were too dry.) 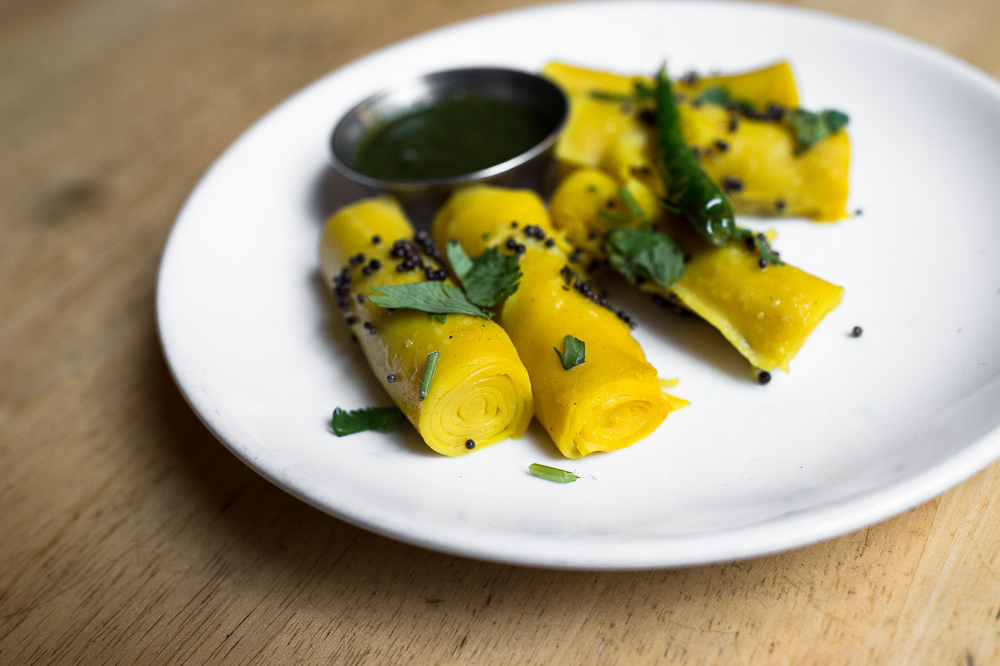 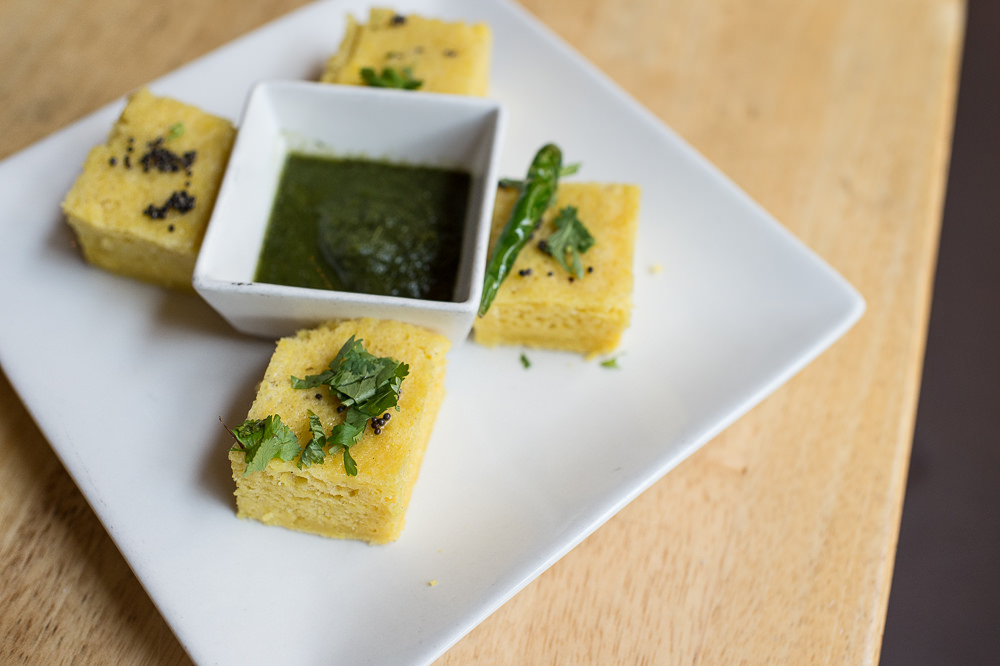 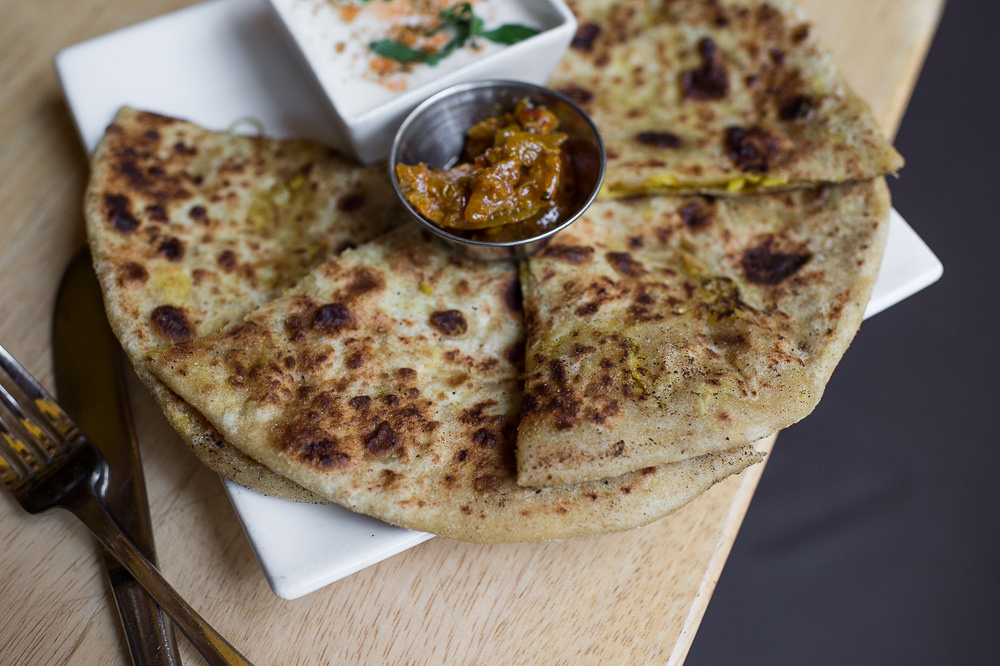 Two starters flaunt the starchy side of the cuisine: kandhvi are rolled chickpea noodles that will remind you of dim sum, while dhokla are airy cakes of chickpea flour that might be mistaken for cornbread made with white cornmeal. Hello, Mississippi!
The renditions of Mughal food modified for Gujarati sensibilities are lush ones, and it's well worth ordering the mixed-vegetable, nut-sauced navratan kurma ("nine-gem curry," $13) just to see how it differs from the usual steam-table product. Ma kii bindi is a homestyle okra dish that leaves the pods nearly intact, bobbing in a tomato sauce that might have been made by an Italian cook who mistakenly substituted cumin for rosemary. Interested in fiery? The vegetable vindaloo is hot as hell and distractingly sweet at the same time. Yes, Gujarati chefs can be sugar freaks.

"Don't neglect the chaats, which have the capacity to transport you to exotic beaches on the other side of the world."

Don't neglect the chaats, which have the capacity to transport you to exotic beaches on the other side of the world. Kachori chaat ($8) describes a crunchy crater of dough erupting with yogurt and tamarind sauce. Scattered around the rim like lava rocks find freshly sprouted mung beans. Don't be deterred from ordering it because the snack seems too healthy; it tastes great. By contrast, dabeli is a working-class mashed potato sandwich on a sesame-seed bun of substantial girth. If McDonald's had originated in Mumbai, the Quarter Pounder would look like this.

There's much to love in all parts of Bhojan's nine-section menu, one of which is unexpectedly devoted to multiple takes on chai tea. The masala chai is fine, but even better is gud (pronounced "good") chai ($3), augmented with jaggery (raw brown sugar) and scented with cardamom. The polar alternative, beverage-wise, would be the restaurant's cocktail program, which averages $9 per drink. That's a couple of dollars below par on the modern cocktail circuit, and these drinks are way strong. However, the one I tried was so horrendous my stomach still churns when I think of it: the kamasutra (wink, wink), colored a carnal shade of red, incorporates something like Hawaiian punch shaken with an unholy trinity of vodka, gin, and rum. Take my advice and stick with chai or beer.

Our review of Bhojan Vegetarian Restaurant