After nearly two years of anticipation and delays, Ivan Orkin's full-blown ramen shop on the Lower East Side has finally debuted. On the second day, I waited outside at 5:15 p.m. as a deluge moistened the line of fidgeting ramen fanatics. Eventually, we were invited to stand inside, snaking in front of a blindingly colorful wall mural featuring a cartoon character, celebrity, and random-vegetable collage. Just as I'd spotted Freewheelin' Frank of Gil Shelton's Furry Freak Brothers offering a thick "number" (yes, the ramen here are partly aimed at stoners), my guest and I were seated at one of the square, well-lit tables in the front room. A rear room, lit by hanging white globes, includes further tables and a counter with plush, backless blue stools and a view of the open kitchen. There's also a rear courtyard with a communal table and a blue-striped awning, and a mosaic pig mural that looks like it might have been filched from the Whitney Biennial.

Everyone knows the story of how Ivan Orkin, a Jewish guy from Long Island, became obsessed with ramen after watching Tampopo, moved to Tokyo for a second time in 2003, and went on to found two noodle parlors that established him demi-god of the genre, fending off feverish Japanese fans. But he didn't achieve those accolades by being doctrinaire; he did it by being bold in a field where conformity and predictability were a given, as ramen noodles — originally Chinese — gradually evolved from dried discount packets to cult status, constant subject of puns and self-deprecating humor. We experienced that here in the 90s with some of our early ramen parlors such as Tokyo La Men on University Place, where the noodles pretended to be French, and the names of the noodles nervously joked on sex and male potency ("ten sin" and "stamina la men" were two).

So Orkin has brought his novel approach and innovative techniques back here and ostentatiously applied a further level of irony. Is New York ready to crown him Noodle King, years after the city has seen such brain-stretching tweaks as ramen with an opaque, bone-white broth (Chuko); pastrami and matzo-ball ramen (Dassara); mazemen that might be confused with Italian spaghetti (Yuji); "powder snow" ramen flaunting grated parmesan (Misoya); and ramen in an unspeakably light, fresh-tomato broth (Sapporo)? Positioning himself in the complex and competitive world of New York ramen — where all the rules have already been subverted — has clearly been a challenge. His strengths include a focus on the subtleties of multigrain noodle composition, and broths of startling depth and complexity.

While the Tokyo Ivan Ramens offer 24 different bowls in six categories, the New York branch has only six choices total. Filling out the concise menu are apps, sometimes voluminous, in three categories, with four selections in each: Cold, Crisp, and Hot. Most provide playfully humorous takes on what is basically standard bistro fare. 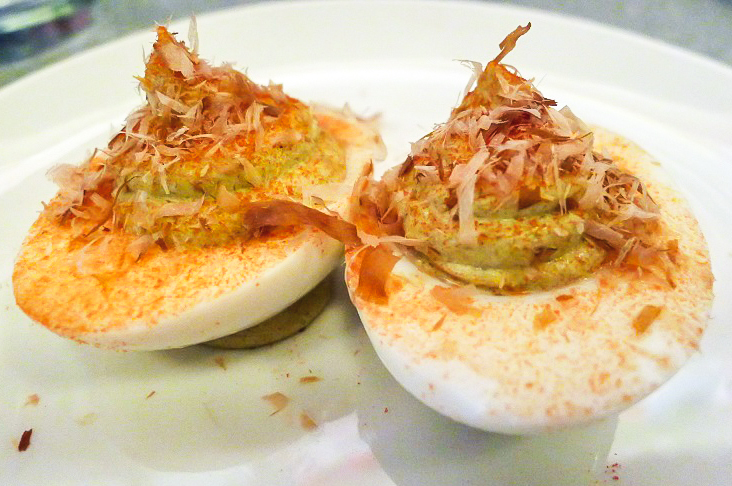 Most unassuming is a deviled egg ($3.50). You've eaten dozens over the last few years — it's one of the tropes of restaurants that angle for Southern and Midwestern flourishes. Inflected with bonito, this one becomes about 20 percent Japanese. And yes the Japanese love mayo, just like us. 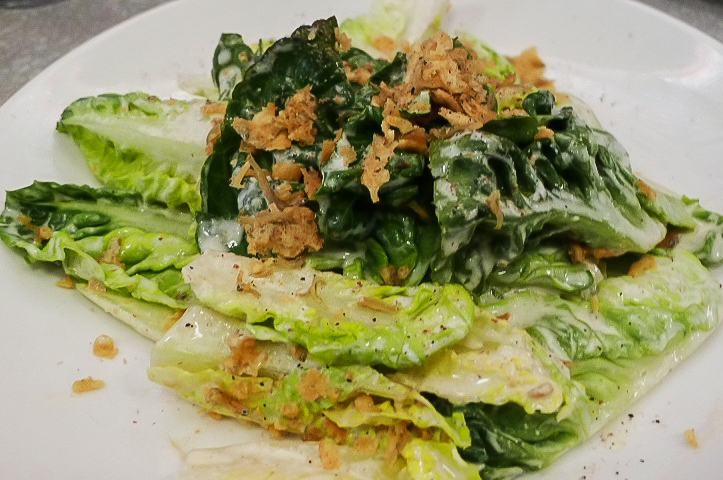 The "little gem salad" ($11) is Orkin's version of the Caesar, with parmesan frico crunchies on top and a nice anchovy aftertaste; it also wears its Japanese influences lightly. Who cares exactly what Orkin is doing here, this is one of the best Caesar salads in town, and you won't miss the bread croutons. 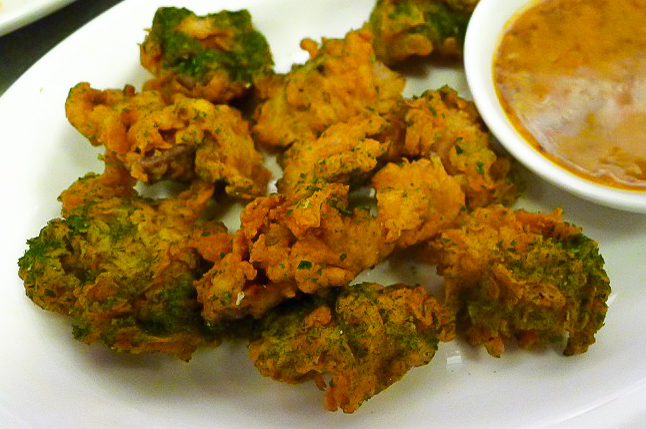 But wait till you see what he's done with fried chicken ($8), a dish beloved of New York's Japanese restaurants, which dispense a soy-marinated version usually featuring boneless tidbits. Here Orkin capitalizes on New York's ongoing organ-meat craze by substituting chicken hearts and livers, with spectacular results. The accompanying dipping sauce will remind you of South Carolina mustard-based barbecue sauce; perhaps it's a little too sweet. 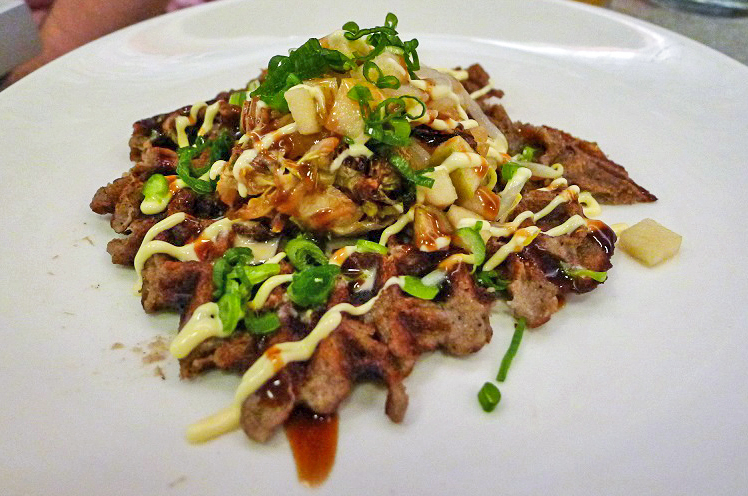 Hands down the best and most interesting dish we tried was a waffle ($12) composed of Pennsylvania scrapple, which cooks up tender and tasty in the waffle iron. This is a brunch Satan reserves for himself. Heaped on top are the sorts of ingredients that go into the Japanese pancake called okonomiyaki, and the marriage of elements is surely one of the city's best dishes of the year.

With apps this good, it's inevitable that they partly overshadow the ramen. This is the result of Orkin taking his rightful place among the ambitious chefs of New York, as if he were dipping a toe in a warm swimming pool. Some diners chose to ignore this truth by simply going straight to the ramen. Not a bad strategy, but a self-defeating one. 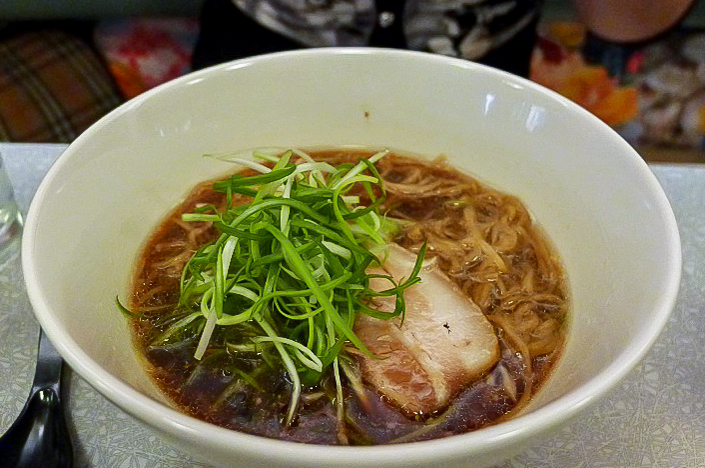 Of course, this is an early first visit, and all the ramen haven't been tried yet. And the menu is sure to be altered as certain recipes work with the dining public, and others don't. Nevertheless, the Tokyo shio ramen ($13) clearly represents an attempt to transplant an overseas success from Tokyo to Gotham. The salt-laced broth is dark as bittersweet chocolate, based on chicken bones long boiled but with a fishy fillip. My companion and I agreed it was too assertively strong, but the effect is to make you slurp more slowly and contemplatively. The rye noodles — already one of the chef's signatures — provide a delicate contrast to the broth, and the remedy for its liquid strength is to simply attenuate it with extra add-ins. 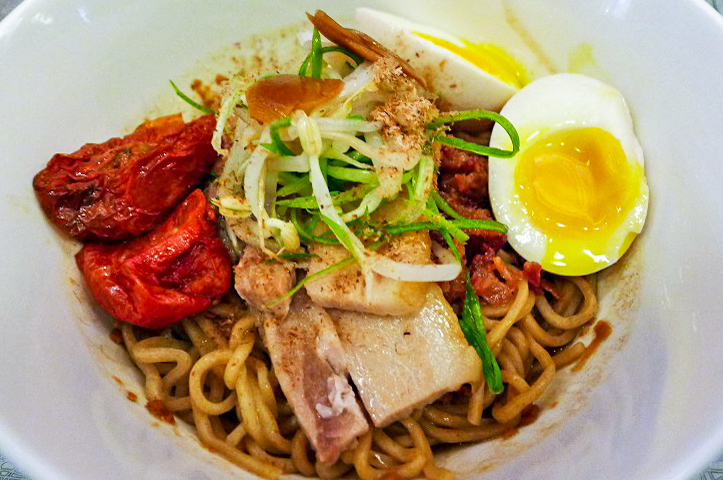 We also ordered the lushest bowl of noodles, the currently popular, low-on-soup mazemen dubbed "triple pork triple garlic" ($15). In this receptacle of powerful flavors, thick whole-wheat ramen shine. And we got ours "fully loaded" ($5), an option that additionally deposits a gooey egg, skinless roasted plum tomatoes, and further piece of braised pork belly in your bowl. It turns any of the Ivan Ramen selections into a full meal.

On our visit, the kitchen hummed like a top, the apps and noodles appeared promptly, and the front of the house moved with army-like coordination. A full meal, with a prefatory tap beer or sake and two courses, is likely to take one hour. So if the entire line outside manages to be seated at the 5:30 opening time, one might predict lulls every hour on the half-hour. Or maybe not, especially if Cronut-like queues develop. Only time will tell.