Trying to duplicate the success of Tacombi at Fonda Nolita but on a higher level, the pressure was on owner Dario Wolos to ramp up the design elements of the massive, high-ceilinged space on West 24th Street, which was formerly a Sicilian restaurant. Also rankling the back of his mind must have been the long lines at Los Tacos No. 1 in the Chelsea Market, whose raucous style, tortilla-centric menu, and bold attempt to mimic an actual taco stand in a Mexican border town seem at least partly inspired by Tacombi.

Perhaps envying the Eataly complex just down the street, Café El Presidente has been styled as a marketplace. Which is somewhat confusing, because the newly opened establishment is simply a restaurant designed to look like an open-air market. To make matters more perplexing, the restaurant has at least three distinct identities: Tacombi, El Presidente, and Tacos Madison, all referred to on the menu. What are we supposed to call the premises? Other brand names stenciled around the room — which feel fake — bear an uncertain relationship to the restaurant. 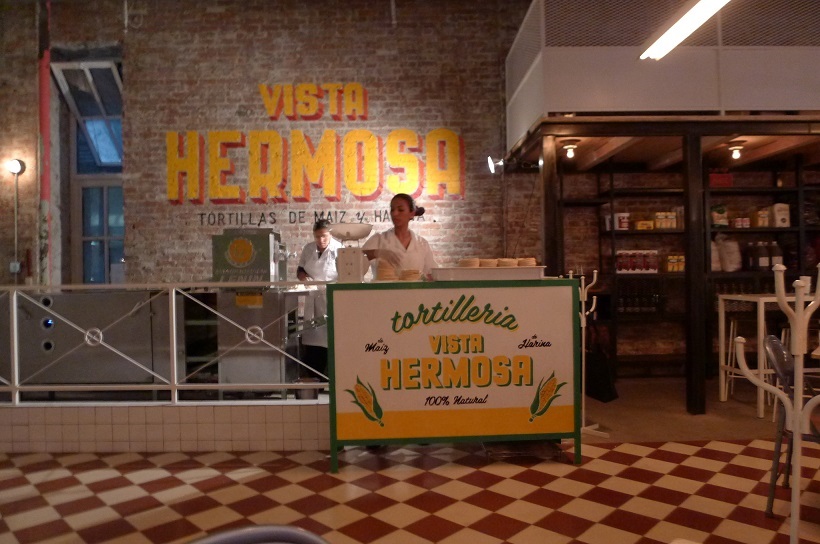 Just inside the door find a juice stand resembling those seen in every south-of-the-border zocalo. An adjacent bar seems to suggest you take some of that fresh juice and make a cocktail out of it. Further into the interior, a tortilla-making machine staffed by two attendants turns out admirable small corn flatbreads. The two hard-working gals, compelled to labor under the importunate scrutiny of freely drinking diners, ought to be getting Actors Equity rates. 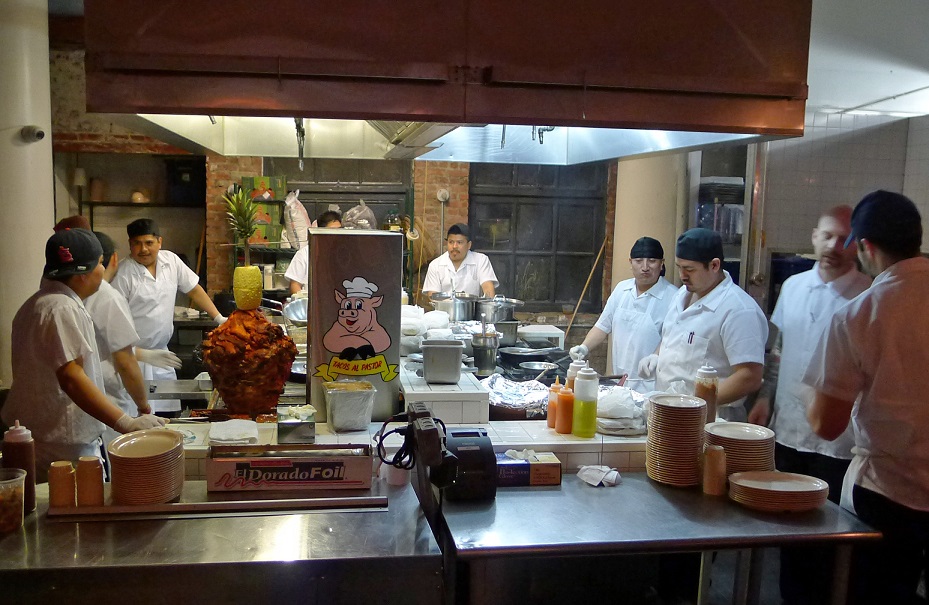 The heart of El Presidente is a rectangular open kitchen surrounded by spectator seats. As at Los Tacos No. 1, a swart, bulging cylinder of pork al pastor is the center of attention. Lined up around the room and in the kitchen waiting for orders, an army of white-aproned waiters and cooks appear to have been instructed to stand at attention. More than a market, the place looks like a 1940s Mexican movie set. You expect Cantinflas to jump out of the shadows and start trading jokes with the staff at any moment. What, I wonder, do the Mexican employees think of this evocation of their home country?

In the middle of the room in almost random array are many small card tables surrounded by folding chairs. With its colorful jumbled décor and playful evocation of a fantasy Mexico, El Presidente is the latest, nuanced twist on theme restaurants like Planet Hollywood and Hard Rock Cafe, a finely tuned machine designed to sell alcoholic beverages and snacks at a premium based on the entertainment value of the premises.

Unlike its predecessors Tacombi at Fonda Nolita, which took its beachside food seriously, and its competitor Los Tacos No. 1, which stuck with a simple roster of meats, poultry, and vegetable matter that could have originated nearly anyplace in Mexico, Tacos Madison attempts a longer menu with regional Mexican flourishes. Still, the bill of fare remains refreshingly simple, divided into three categories: Para Acompanar (appetizers), Tacos del Presidente (taco platters consisting of a heap of meat, a couple of condiments, and four small corn tortillas), and Taco Especiales (slightly more exotic combinations and expensive creations served singly). 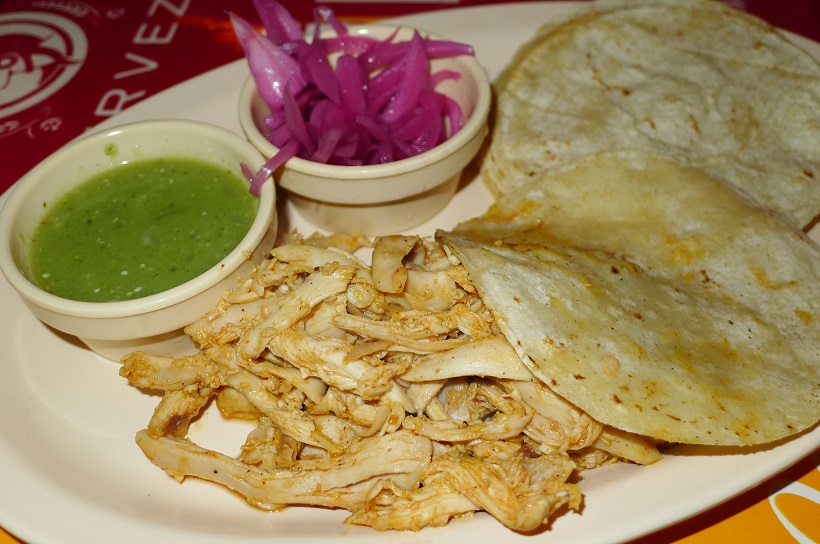 [Pollo valladolid]
My guest and I immediately zoned in on pollo Valladolid ($11.95), one of the Tacos del Presidente that arrives as a DIY taco assembly kit, including shredded poultry, pickled onions, salsa, and four tortillas. The dish is attributed to a town in Yucatan, Valladolid — a dusty and fantastically isolated place famous for its cattle ranching and leather goods, with few tourist accommodations. It is, however, a center of Mexican gastronomy, where the specialty is cochinita pibil, which you can sample at several open-air stands on one corner of the town square. In its purest form this amazing Mayan dish is made by soaking pork in sour orange and annatto, then barbecuing it underground in a banana leaf. Alas, El Presidente's version pales by comparison, substituting a heap of white-meat chicken strips colored the palest orange, and then offering it with, not the habanero sauce that is relished in Valladolid, but a tame green salsa instead. 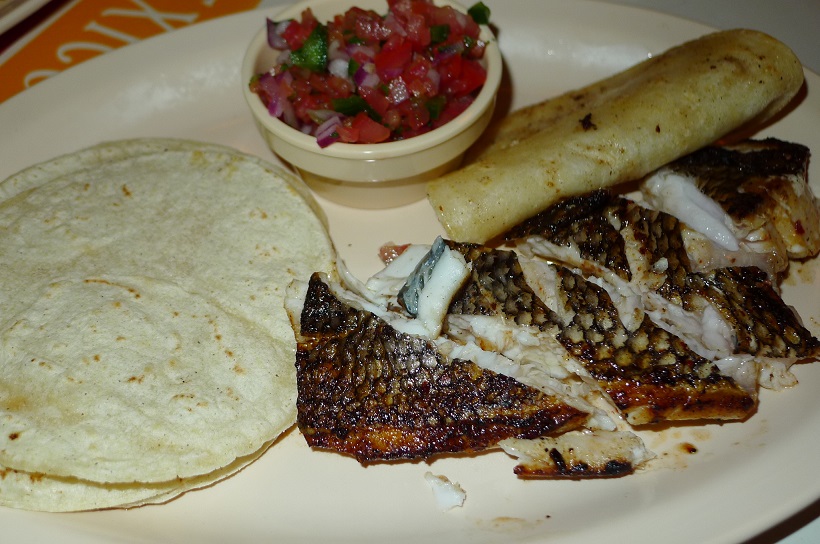 [Pescado a la plancha Oaxaca]
Straying into more dangerous territory, El Presidente offers a fish taco attributed to Oaxaca, revered as the Mexican state with the most ancient, complex, and time-consuming pre-Columbian cooking in the country, making French haute cuisine look like popping something in the microwave. The place is known as the home of seven moles, each of which can take days to prepare. Sad then, that representing this cooking on 24th Street is pescado a la plancha Oaxaca (market price, $17.95), a smallish piece of sea bass filet served with pico de gallo on the side. Don't get me wrong, this dish is wholesome and nicely cooked; it simply gives a false picture of Oaxacan food — which is currently almost nonexistent in Gotham. The dish is also way too expensive for a place with folding chairs.

These tacos issue from the open kitchen at the rear of the room, which has the separate name of Tacos Madison, as if it were just another stall in the "marketplace" rather than the restaurant's actual kitchen. This kitchen is helmed by Jason DeBriere, whose work at Peels I enjoyed on many occasions. Here, he treats us to essays in blandness — well-written essays to be sure, but please tell me, when will restaurateurs who make gussied-up versions of Mexican food realize that gringos and gringas often love chiles and highly spiced food, and readjust their recipes accordingly? 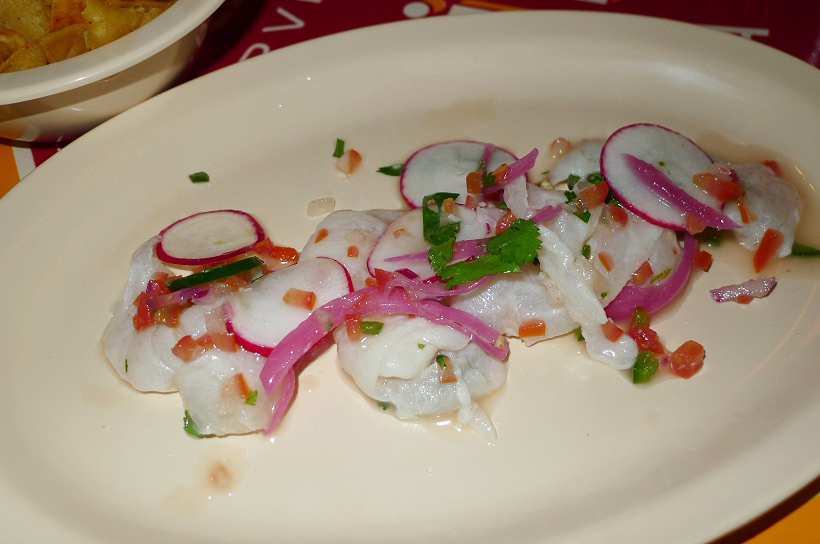 [Ceviche]
There were things we thoroughly enjoyed on the menu too, things that didn't make us grit our teeth and wonder what the restaurant was up to. A ceviche ($14.95) made with the same sea bass was as good as any ceviche in town — though, truth be told, it would be classified as a cooking-school ceviche rather than a Mexican one. 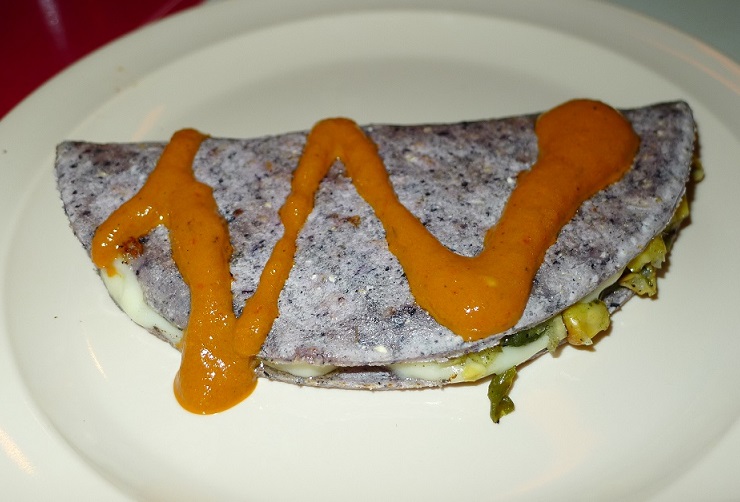 [Quesadilla]
I also thoroughly enjoyed a quesadilla made with a single blue corn tortilla flopped over a filling of cheese, charred corn, and roasted poblano pepper ($5.95), with a spicy orange puree squiggled over the top. I have no problem with invented dishes as long as they're as tasty as this one. 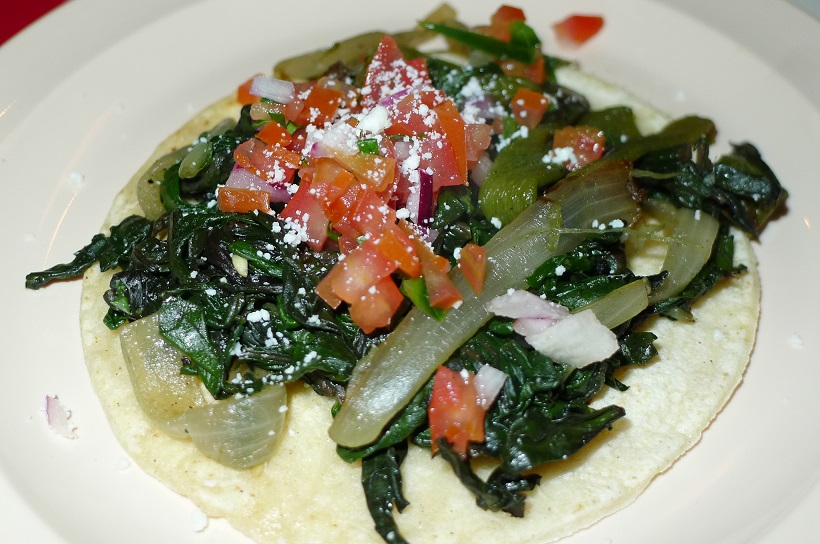 [Swiss chard taco]
In a similar improvisational vein, a taco featuring Swiss chard should be sent back to Switzerland — it was dull and sloppy, despite the feeling of healthfulness it was doubtlessly intended to convey. 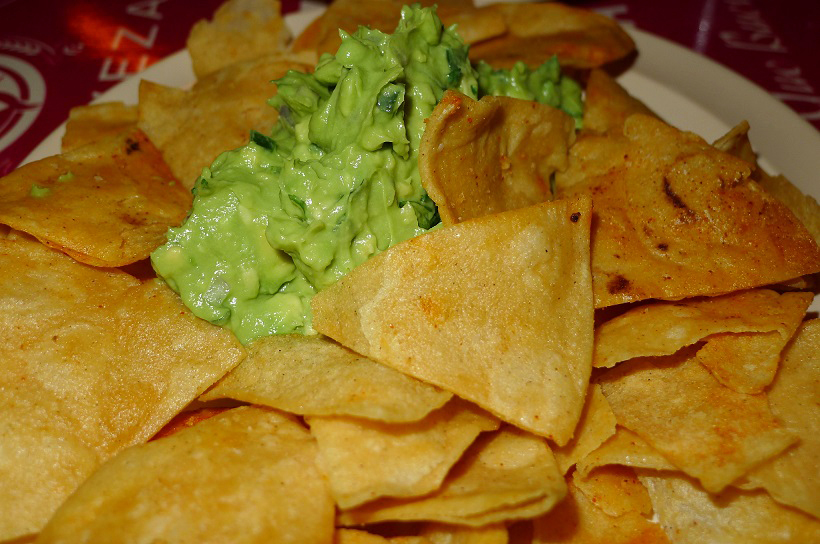 The guac was good — though predictably low on lime juice. 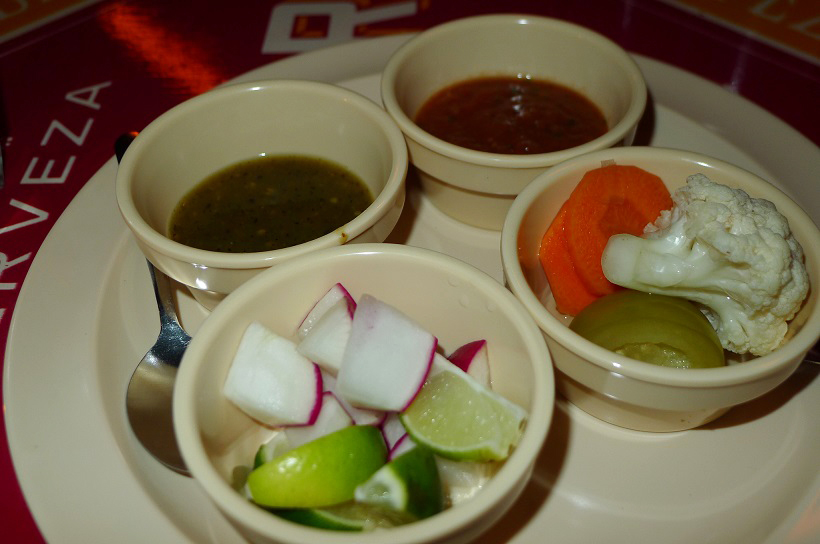 That was remedied by fishing the lime wedges out of the caddy brought to the table at the start of the meal that included two mild salsas — one brown, one green — and escabeche, an assortment of pickles. Low on salt, the guac was outshone by the tortilla chips, which are some of the best and freshest tasting in town. 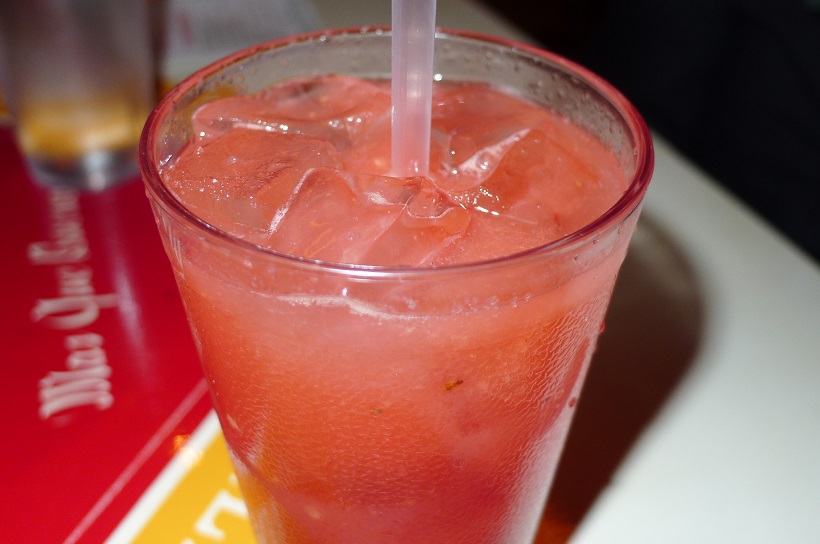 And do, by all means, try the fruit juices ($3.49 each), which do more to accurately recall your Mexican vacation than the rest of the menu. The watermelon verged on the sublime, and the pineapple was good, too – our kindly and somewhat formal waiter (who, like most of the staff, is Mexican) comped it apologetically when he informed us that the horchata we'd ordered would never be arriving.

El Presidente is currently only a few days into his term. If the will and political savvy are there, and he gooses up the food with some strong and assertive flavors, he may yet be eligible to finish out his term.