Chef Alfred Portale on Developing His Style at Gotham

Share All sharing options for: Chef Alfred Portale on Developing His Style at Gotham

Welcome to Kitchen Time Machine, a new interview series in which author and Toqueland blogger Andrew Friedman sits down with some of New York's most iconic chefs and restaurateurs. Yesterday, Andrew talked with Alfred Portale about the early days of Gotham Bar and Grill. In part two, the chef discusses the critics and developing his own personal style: 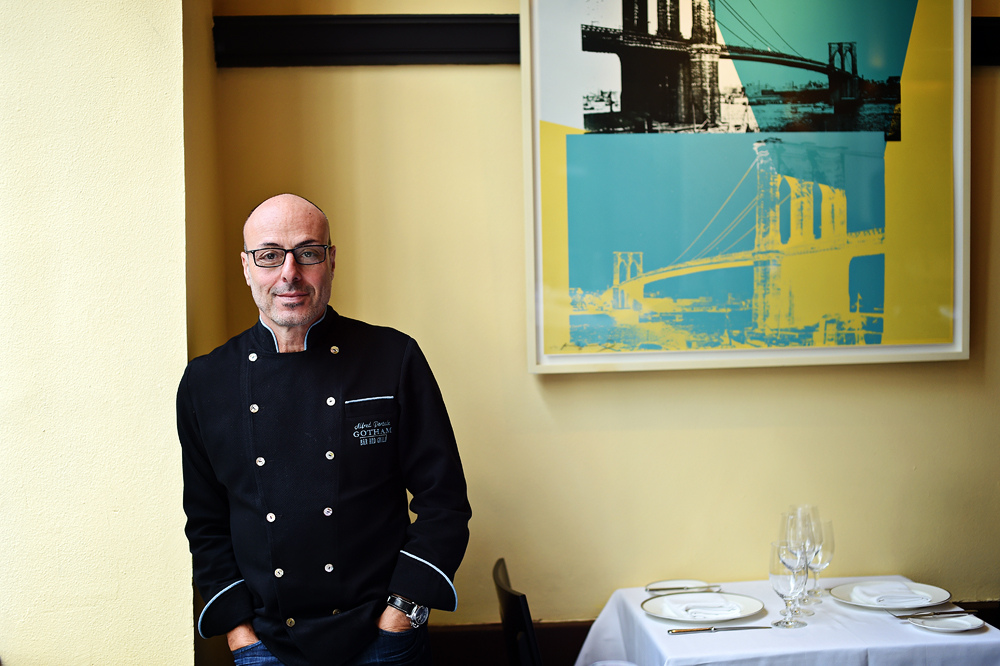 [Alfred Portale at Gotham Bar and Grill by Daniel Krieger]

Andrew Friedman: When you started cooking, spending time in France was a right of passage. If you were on the East Coast, very generally speaking, you'd go to the CIA and then you'd get on a plane and go to France.

Alfred Portale: Yeah. Back then obviously if you're a young chef, one of the most important things once you get out of culinary school, or even if you don't go to culinary school, is working in a fine restaurant. And the opportunities in this country, frankly, were somewhat limited. There was no French Laundry. There was no Alinea. None of these restaurants existed. The top restaurants in New York outside of Quilted Giraffe were French restaurants. Spain hadn't happened. England was in the Dark Ages, culinarily speaking. So the only place to go was France.

Do you feel like it's necessary for young cooks today to leave the country to get what you got?

No, I don't. Well, I think the more experience you have, the more varied experience you have, provided it's all good, is beneficial. It's critical. Whether it's done by staging or simply eating in various restaurants in France, in Spain, in Italy, I think it's critical to your development as a chef in your aesthetic. But do you have to go like I did and work for nothing for a year, six days a week, 14 hours a day? No, you can do that at the French Laundry, not work for nothing, but get [that level of experience].

There was a lot happening.

A lot of American food. A lot of action downtown. Do you remember feeling like you were part of something that was ramping up, or do you not realize something like that until you look backwards?

I always felt that back then the food was as good as the uptown fancy restaurants, maybe more modern and perhaps even better in their ingredients.

As soon as we got our first three star review, I thought that what we had accomplished was a game changer. Here we were, you know, a large restaurant, over 150 seats with servers casually dressed, but very polished in their knowledge of the wine list and the food. I always felt that back then the food was as good as the uptown fancy restaurants, maybe more modern and perhaps even better in their ingredients. And I really felt that the restaurant was a game changer, that this is the way people wanted to eat, dinner was theater and entertainment and free of pretension and formality.

Did you have to make a leap yourself when this opportunity came up? In other words, did you, having spent time in France, did you always imagine you were going to be an uptown, more formal chef? Did you have to open your mind to coming here when this came up?

The way I felt back then about food was I was a young chef really trying to do something new and innovative and I was really into this very labor intensive super high-touch food. In France, sometimes we had four cooks working on two dishes. And that's really what I wanted to do. I didn't think about it consciously, but once I arrived at Gotham, I realized, "Hey, we have 160 seats. We can do 300 covers here. I have to figure out a way to do the kind of food that I want to do and make the impact that I want for those big numbers." So that was the adjustment, how to do that, the construct of food and the architectural plating. 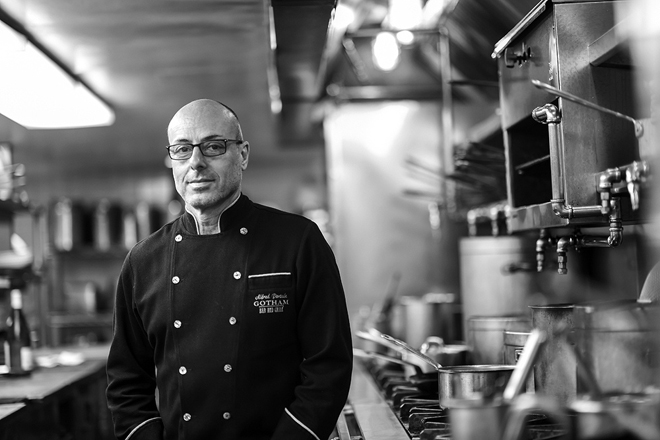 And the untold story about that was that it was done to ensure consistency.

That's correct. Totally. I wanted control of the dishes and I had an inexperienced crew and I was trying to build consistency. The fact that I was trying to do food that I had done in France for 100 guests with 40 cooks, I was trying to do that with, like, 12 cooks, doing 200 guests. So I was trying to do the same food. So I kind of came up with this method: I figured out a way to produce, to prep and to cook or pre-cook and reheat and cut out a lot of the human error so that things could be done fast. That was how the stacking started: Rather than trying to cook a big piece of fish, I'd cut it into two thin pieces and then stack them.

Because they would cook faster that way?

Yes. It was all a really deliberate way to control the consistency and the speed coming out of the kitchen. And it worked because the comments that we heard, or I heard, early on from guys like Joe Baum and other people, they were astonished at the presentation of the food and how intricate it seemed compared to the size of the restaurant.

You mean just that you could do it?

That's something that Joe Baum would say to you?

Baum. A lot of people. They were like, "How are you doing this?" Because the food is complex. It's really beautifully presented. It's consistent. And there's no wait. And we were doing 225 covers back then, then we went up to 300 covers. People just didn't understand it.

Another thing that contributed to it was my interest in art and design, and not a complex understanding but a minor understanding of Japanese bonsai and Japanese landscaping and garden. I still have really, really strong interests in landscaping and trees and all that stuff. And I studied. I had books and books. I was a member of the Japanese Bonsai Society of Greater Buffalo, New York.

Yeah. And I read all about trees and studied the books that I had and had, you know, as much as a 22-year-old could understand it, a decent understanding of how the different styles, formal styles of the trees and the branch structure and what it all meant. And I honestly built that into a lot of the presentations.

Built it in how? How does that relate to, say, a carrot?

Composition. I tried to do have three heights on the plate, usually.

When you think back, what were the early milestones in Gotham's success?

When I started here, it was busy but we were only doing 100 covers. And then it went up to, like, 160 after Gael's review. And then the New York Times just blew the doors off of this place.

Gael Greene's [New York Magazine] review. Gael reviewed us first. It was a dual review: Montrachet with David Bouley as chef, and me here. And that kicked up the numbers substantially. Because when I started here, it was busy but we were only doing 100 covers. And then it went up to, like, 160 after Gael's review. And then the New York Times just blew the doors off of this place.

"Tall food" became a buzz phrase and a focus of attention on this restaurant for several years. How do you feel about that, looking back? We weren't having an on the record conversation at the time but we've discussed this: it got to be something of an albatross for you, didn't it?

Yeah. It was a big deal.

Were you surprised by that?

At the time I was surprised, yes. I mean, I didn't really talk about it. I talked about construction, consistency, sort of an architectural approach, practical reasons for it, so on and so forth, and everything we just stated, how I got there. But then it got picked up in the media. And before I knew it, it had become a national rage. And I was literally getting calls from all over the country on a weekly basis, sometimes two or three a week: "I'm writing an article on tall food and everybody says you're the pioneer." Over and over and over again. When it reached that point, that's when I stopped talking about it. Because articles would come out with guys mounting up mashed potatoes and piling carrots on top of that and sticking herb sprigs on the top of that, and I was, like, "I don't want to be associated with this."

When Ruth Reichl reviewed the restaurant she wrote that to focus on the presentation was to miss the point. Was that attention solely frustrating to you or was your feeling, "Well, at least this brings the people in?"

No. I did not embrace it on any level because I was always quite proud of saying that Gotham was not a trend. It had sort of a timeless quality about it. And I basically keep the food current. You know, there are a lot of trends in cooking. And a lot of derivative food. And I always dabbled a little bit, but kept true to the identity of what I thought was Gotham's food.

Head over to Toqueland for more thoughts on Alfred Portale.

· Previously: Alfred Portale on the Early Days of Gotham Bar and Grill [~ENY~]
· All Editions of Kitchen Time Machine [~ENY~]