Share All sharing options for: Tandoori Hut and Other Great Cheap NYC Restaurants

Who doesn't love tandoori chicken? In the days before New York had barbecue, it was one of the few ways to score a smoky meal. And in the fatless '90s, it was further popularized because, to facilitate absorption of the spice mixture, it usually came without skin and was thus automatically deemed "lo-fat." Named after the ancient clay oven in which it's cooked, tandoori chicken, is also a dish of relatively recent vintage, invented in the Dehli restaurant Moti Mahal in 1947. It became an instant hit. 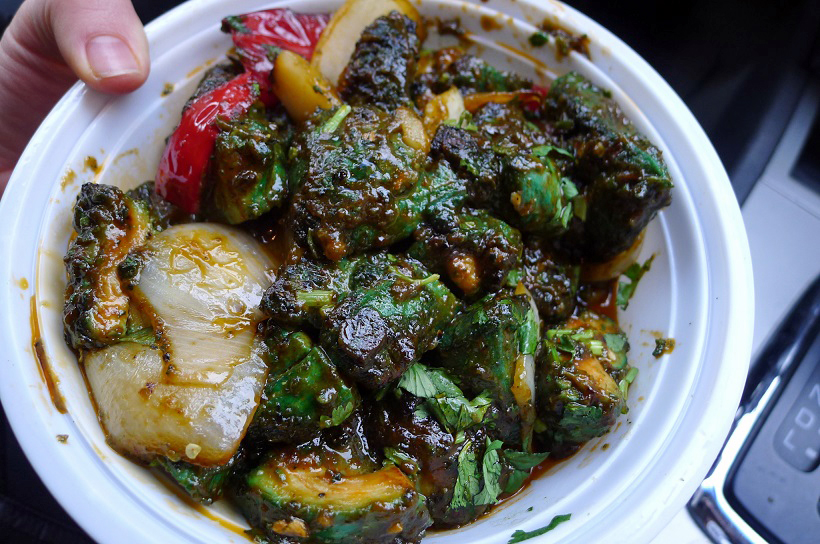 Tandoori Hut has been one of the city's foremost purveyors of tandoori chicken for 14 years. I stopped by recently to check on this tiny spot next to a Sikh temple just off Atlantic Avenue in Richmond Hill, Queens. The place, which has only five or six tables plus a bar, boasts a number of colors of tandoori chicken besides the expected red. I reacquainted myself with chicken methi malai — bright green morsels of poultry rubbed with mint and fenugreek (shown). With an additional garlic naan, the dish was enough to totally satisfy two weary travelers on a beeline by car from the Bronx to Staten Island. Another tandoori selection, lemon chicken, features a bright yellow exterior — the bird glows.

Novelty aside, the regular red tandoori chicken is probably a shade better than any other version you've tried. The menu features 23 entrees in the tandoori section alone, plus an additional 200 or so further selections, including a surprising number of vegetarian dishes done in the tandoor. The breads alone are worth a visit, including such unusual varieties as cheese-stuffed paneer kulcha, coconut naan with fresh coconut, and a Mideast-leaning til naan paved with sesame seeds. (119-08 94th Ave, Queens, 718-850-8919) 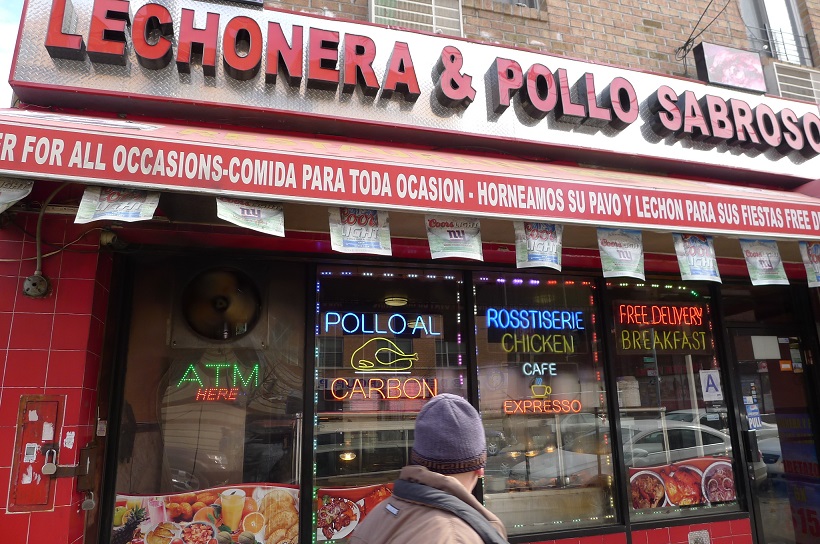 One type of restaurant typical of both Puerto Rican and Dominican cooking is the Lechonera, a place that specializes in all things porky, but most particularly in pork roasts made from young pigs. The meat is fragrant and tender, and runs from a medium gray-brown to darker patches and streaks, and comes accompanied by crisp pieces of skin. Various neighborhoods in the Bronx remain the city's greatest strongholds of the lechonera, and I was very pleased recently while traversing Morrisania — a region of the Bronx every bit as hilly as San Francisco — to stumble on Lechonera Pollo Sabroso, which happily combines a traditional lechonera with a rotisserie chicken joint. The interior is boxy and a little darker than you might like, and the food is delicious and spectacularly inexpensive. 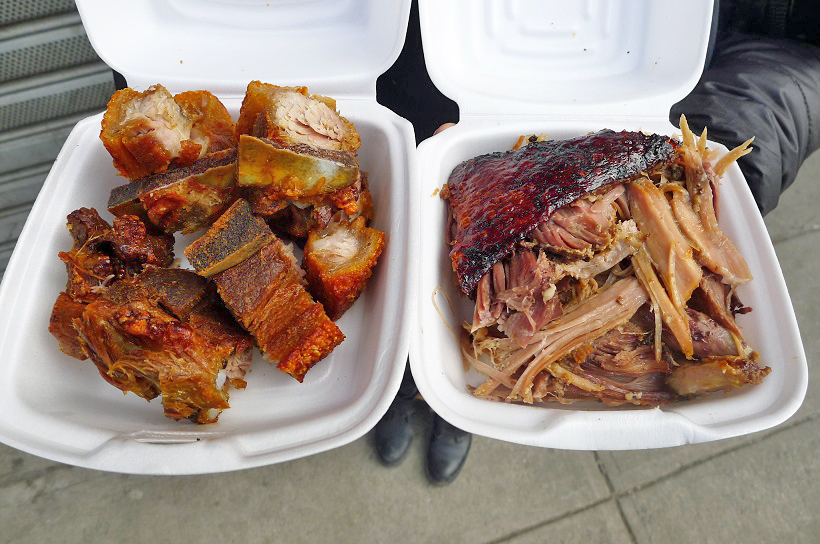 A friend and I carried out several things and avidly munched them in the car. We had a serving of the lechon itself, with skin that was delicate and crisp, the meat well-salted and well-garlicked; a few shards of pork belly, crackling skin attached; and an alcapurria, one of several cuchifritos on the menu. Atypically, this giant, lard-fried orb had a coating of mashed potatoes instead of the usual mashed yuca. When bitten into, though, ground pork tumbled out in the usual fashion. (3326 3rd Ave, Bronx, 347-271-4642) 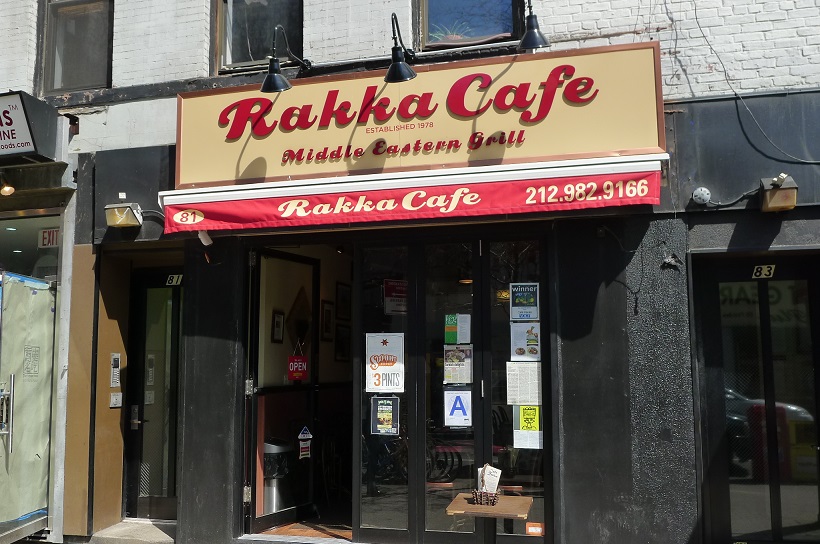 Since 1978 Café Rakka has been a source of cheap Middle Eastern eats in the East Village. So when the Avenue B offshoot closed last year, and the mother ship on St. Marks also shut down, supposedly for renovations, we had reason to fear. Now the St. Marks locale has re-opened with spanking new décor in a style that might be termed Egyptian ranch house. 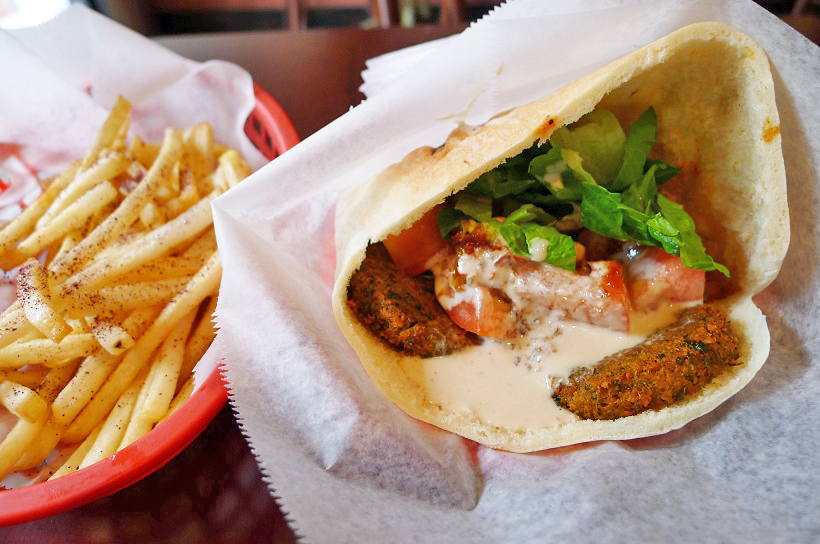 The menu remains intact, with many of the kebabs done on what looks like a George Foreman Grill, and the falafel sandwich ($3.50) is as good and inexpensive as it ever was, especially when sided with za'atar-dusted shoestring fries ($2). The baba is also better than average. (81 St Marks Pl, 212-982-9166)