Can a restaurant with starchy service and high prices be accurately termed "casual"? That is the question Jesse Schenker's new restaurant The Gander sets out to answer. Unlike its smaller precursor Recette, The Gander occupies a king-size space on the southern edge of the Flatiron District, a workaday locale that turns dark and mysterious as night falls and the shoppers and office workers vanish. The well-lit front room contains a lengthy rectangular bar with backless stools, plus small tables and bigger booths below jazzy color photos from the past, and a podium where employees, dressed as if for a night out with business colleagues, stand expectantly to greet you. They fumble with their reservations software for what seems like several minutes, and finally find your alias.

The perfectly square dining room in back is the larger of the two spaces, allowing The Gander — Is the name intended as a noun or verb? — to hold 150 diners in total. With its high ceilings, perfectly aligned lampshade sconces transmitting a yellowish light, and smeary bronze wall treatments that suggest great age, the restaurant design makes you feel like you're in Los Angeles' Brown Derby sometime in the late '60s. It's almost as if the place was destined to serve as a Mad Men set.

You may be thinking, "Where's my cobb salad?" as the waiter hands you a menu and you grok that the offerings are partly in a Franco-Italian vein, but also featuring modern notions about organ meat and comfort food — dishes that might have been adventuresome five years ago, but now seem commonplace. This is not a bad thing, and running your eye over the menu seems like a visit with an old friend. Just note there's something of a conceptual disjuncture between the '60s decor and the '00s food.

In the opening days, the rooms filled up around 8 p.m. with a somber crowd that also seemed to be from another era, as if they'd been embalmed in the basement for several decades and finally released. The young men wore blazers or soft-shouldered suits with skinny ties, their hair slicked back and gleaming with Brylcreem; directly beside my companion and me an expensively dressed elderly couple, both rather cranky, dressed down the waiter and sent one dish back at nearly every course for some perceived defect or other. The scent of testosterone hung heavily in the air: men outnumbered women three-to-one, at least on that particular evening. 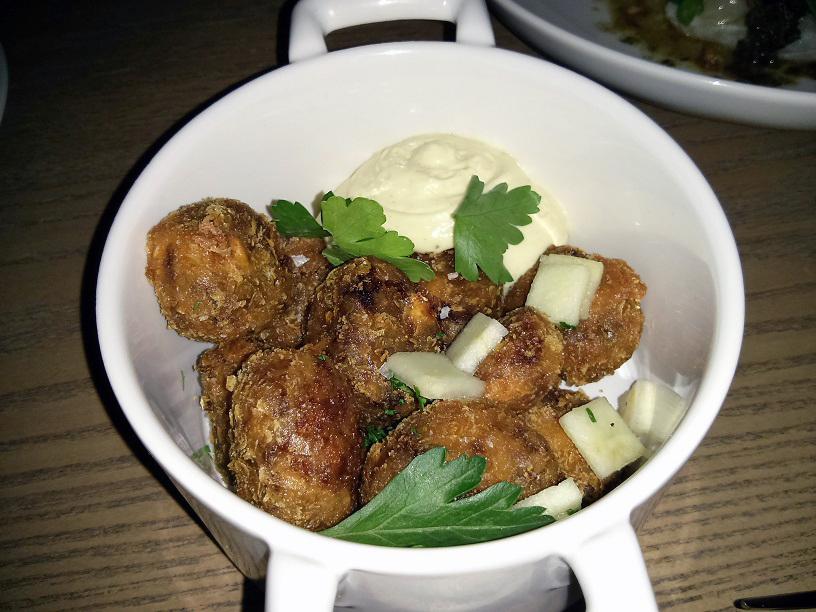 [Tater tots]
The bill of fare divides into seven sections (Snacks, Starters, Charcuterie, Cheese, Sides, Pasta, Mains) and, as at most restaurants opening nowadays, the emphasis is on short salty dishes, presumably to encourage beverage consumption, which is where the real money lies. And who wants to eat a conventional meal anymore? First to hit the table after extensive touting by our waiter-in-training were brisket-filled tater tots ($9) served with a fluffy horseradish dip. They were delectable, and the price seemed reasonable given the dish's density and technical aspects of preparation. Still, the tots mainly evoked school lunch — though at school the dip would more likely have been ketchup. 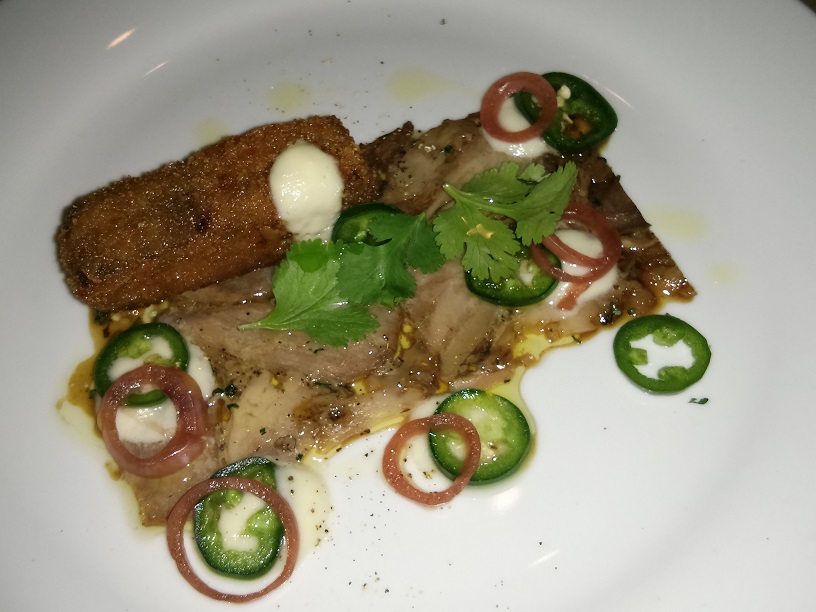 [Head cheese]
Borrowing a card from long-ago Batali was a head cheese ($9) drenched in oniony soubise and dotted with thin-sliced jalapenos, requiring you to chase the little moist gobs of pig face around your plate with a fork. Luckily, the remedy for this excess soupiness was close at hand: excellent parker house rolls crusted with salt and served with a generous pat of sweet butter, replenished at your request throughout the meal. Now, that's hospitality! A third dish, from the Starter section, arrived soon after: a fluke crudo ($15) that was the only unsatisfactory one of our three starters. Why? The fish was delivered in finger-shaped wads, hidden under too much vegetal frou-frou, and on top of each slab was a raw rock shrimp like a pink jockey riding a white translucent horse. As far as I'm concerned, raw fish should be sliced thin and barely dressed for maximum enjoyment. 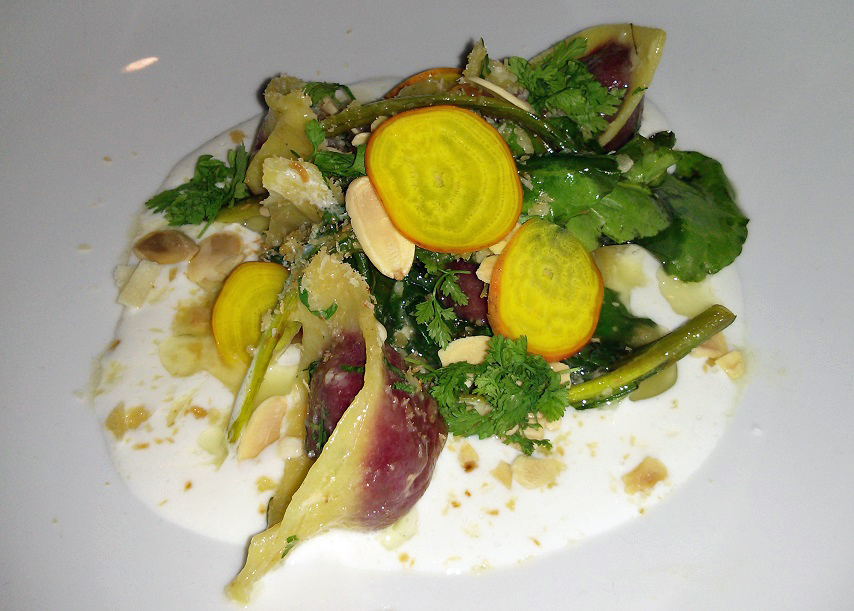 [Beet tortelli]
If I went back to The Gander again, I'd focus on the four pasta choices. They are conveniently available in full and half sizes, and one of them, at least, boogied. The double-barrelled pasta twists called casarecci ($14/$22) arrive topped with crunchy breadcrumbs and bathed in a suckling pig ragu so good it almost oinks. Spotting a northern Italian stuffed pasta on the list, we also went for the beet tortelli shaped like goldfish, aglow with their filling of deep red root vegetable and accompanied by a catalog of "good for you" things that included goat yogurt and thin-sliced raw yellow beets. Though it created a beautiful picture on the plate, the pasta wrappers were way too thick and tough, the red filling too blasé.

[The chicken]
Nearly filled up by two half-orders of pasta, we went for a single shared main course, one of seven that ran, pricewise, from a vegetarian cook-up featuring mushrooms, turnips, and chard ($20), to a dry-aged sirloin ($40). The rotisserie chicken ($21) was nicely cooked, but the real prize was the wonderfully overcooked faro underneath, awash in something called a chicken vinaigrette. At first, we pushed the half-pullet out of the way and attacked the soupy grain; then we addressed the bird, which was on the skimpy side. The broccoli, which was way too al dente and didn't really go with the rest of the ensemble — like a polka dot bow tie with a paisley shirt — got left on the plate.

So, in the opening days of The Gander, we were wowed by about half the dishes we tried, enjoying those that seemed familiar more than the experiments. The chef will doubtlessly tinker with the menu, and here's hoping the beverage director finds some slightly cheaper wines that can be ordered by the glass. With a $15 pinot noir and a $14 Cotes du Rhone, along with six dishes, only one of them an entrée, and no dessert, our tab came to $132 for two, pre-tip. And there's nothing casual about that.