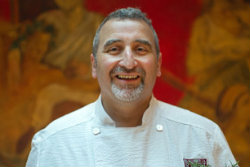 1) Cesare Casella on Learning to Cook in a Women's World:
With his trademark peck of rosemary in his shirt pocket, chef Cesare Casella of Salumeria Rosi stopped by the station to talk to HRN founder and owner of Heritage Foods USA Patrick Martins about how he learned how to cook in his mother's kitchen, and speaks to the importance of women chefs in his life and the life of other Italian chefs:

The women is who dominates the kitchen…Heinz (Winkler), the youngest three-star michelin chef in the world, he started in a restaurant where his mother was the chef. 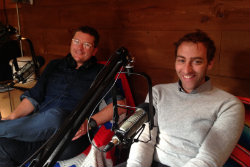 2) Andrew Tarlow and Sean Rembold on Word of Mouth:

The leaders of the restaurant group that spans North Brooklyn and Queens from Romans to She-Wolf chatted with Leiti Hsu, and Tarlow shared a bit of his personal business ethos:

I've been inspired by being out in the world alone and having to be taken care of by other people - what that means and how others let you into their world. Once you leave the confines of your community you realize how much you need others to help you. 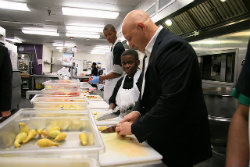 3) Evolutionaries: Tom Colicchio:
Tommy Clicks was the subject of the most recent episode of HRN's Evolutionaries. Here he is on his inspiration for the simplistic style at Craft:

I wanted to go to a place where you can get a bowl of peas that were just perfect. Now, you know in the kitchen, when peas come in season, there are times when they are sweet, they're delicious, and the next day they're starchy and nasty. And yet you have a menu, and you have peas on two appetizers and an entree. What are you gonna do? You use the peas, because you have to. I said, I want to be in the position where, if those peas aren't perfect, I can send them away, and not worry about it because they're just on a side dish.

4) Restaurant PR Magic with Bullfrog & Baum:
Greg and Darin Bresnitz of Finger on the Pulse host Marcus Braham and Shannon Mulcahy of Bullfrog and Baum PR on this week's episode of Snacky Tunes. Regarding the role of storytelling in food PR: 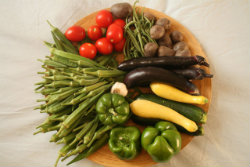 5) The History of CSAs in NYC:
On the eve of the Just Food Conference, HRN Reporter Briana Kurtz gave a report on the origins of the now-common CSA in our fair city:

They didn't get their start in New York City until 1991 when Roxbury Farms launched the first CSA our of the Union Square Greenmarket.