Alfred Portale on the Early Days of Gotham Bar and Grill

Share All sharing options for: Alfred Portale on the Early Days of Gotham Bar and Grill

Welcome to Kitchen Time Machine, a new interview series in which author and Toqueland blogger Andrew Friedman sits down with some of New York's most iconic chefs and restaurateurs. Right now: part one of Andrew's interview with Alfred Portale 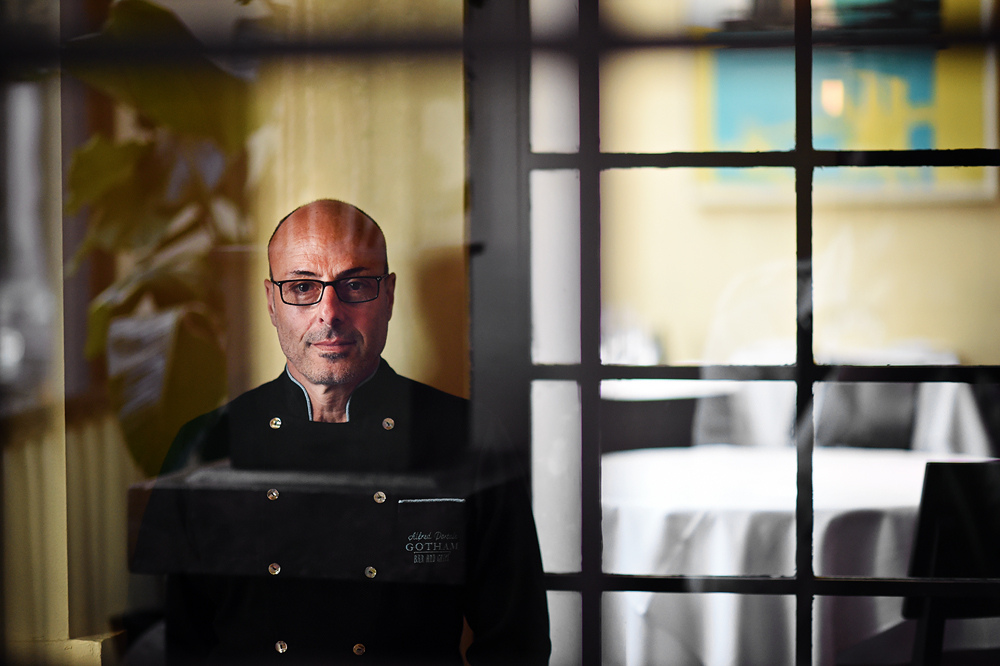 [Alfred Portale at Gotham Bar and Grill by Daniel Krieger]

Gotham Bar and Grill celebrated its 30th anniversary with a gala fundraiser earlier this week, the perfect occasion to sit down with chef-partner Alfred Portale to discuss the history of the restaurant and how things have changed for cooks and chefs alike in our fair city since Gotham's early days. (Full disclosure: Alfred and I wrote three cookbooks together, including the Gotham Bar and Grill Cookbook.) Alfred, a native of Buffalo, New York, trained at the Culinary Institute of America in Hyde Park, NY, then in France under the Troisgros brothers and Michel Guérard, before returning to New York City in the early 1980s, where he took the helm at Gotham in 1985. The restaurant, a recipient of an unmatched five three-star New York Times reviews over the years (most recently by Sam Sifton in 2011), plays a pivotal role in my upcoming book on the American chefs and restaurants of the 1970s and 1980s.

Alfred Portale: All of the above. First of all, people have been so congratulatory. "30 years. Oh, my God!" I think Jonathan Waxman said the best thing: He said, "Alfred, this is a big deal. It's not that you have survived for 30 years. You've gotten better every year for 30 years." When he said that, I realized that is why we're so proud; not because we've stuck around, but the restaurant truly has gotten better every year. I feel blessed. We've had just a tremendous team here. The culture here in the restaurant is so positive.

You're somebody who personally takes really good care of yourself. You exercise a lot. You play a lot of tennis. I feel like you've had a similar approach to the restaurant. Even since I first met you, which was about 10 years into the restaurant's lifespan, there's been this constant effort to rejuvenate it. Is that fair?

We have a great restaurant, but it's great only because we continually say, "How can we do this better? What can we do better?"

It's more than fair. It's completely accurate. It's my nature and it's very much a part of who I am. I can remember getting our first three star review and what an incredible shock and thrill that was. But instead of me celebrating and popping Champagne corks, I started to worry about the next day. "We have three stars, now I have to get in here early. People's expectations are different. It's a whole new ballgame." And I kind of approached each year like that. We have a great restaurant, but it's great only because we continually say, "How can we do this better? What can we do better?"

What are some of the things you've done?

A lot of things. More recently, about six, seven years ago, we changed our service system in terms of captains and front runners. It's hard to be specific about one thing or put too much emphasis on one change. The restaurant itself has gone through multiple, what I call "restorations." It's a whole new color palate in here. Everything from flatware, tabletop, linens, chairs, floors, lights. Menu covers. Everything.

We've re done our logo, I think, four times. There's always something to do to make the restaurant better.

We should probably add a footnote that this is the 30th anniversary of the restaurant but really it's your 29th anniversary.

I think a lot of people assume I was here at the beginning.

The restaurant was conceived as a very different restaurant when it opened. It was very eclectic, with these ethnic references, like tagines. It had chicken liver. It had Matzo ball soup. It had pasta. It was a very eclectic multi national menu and very, very casual.

So many things happened in the first year that needed to be corrected that it was a major, major amount of work.

The thing that my partners — Jerry Kretchmer, Jeff Bliss, Rick and Robert Rathe — did extremely well is that they built a beautiful restaurant. Gotham was and remains really exciting and innovative in terms of its design. The whole idea that it's a big open room yet there are different raised elevations and unique lighting...it was built to really capture all the energy and excitement in the room. But the food and service didn't live up to their expectations.

What happened when you got here?

I came almost on the day of the one year anniversary. So many things happened in the first year that needed to be corrected that it was a major, major amount of work.

You're not just talking about food?
I'm talking about the menu covers, the wine list, the service style, the plates, the steak knives, the condition of the kitchen, storage. Every single thing you can think of. I first focused solely on the food. That was my first focus. But then once that got going three, four months in, then I turned to the service, service style, uniforms, all these things. And my partners, once I had proven myself, they got behind it. So we changed over all of our flatware, all of our plates and glassware and really started upgrading the restaurant. And we're still doing it. 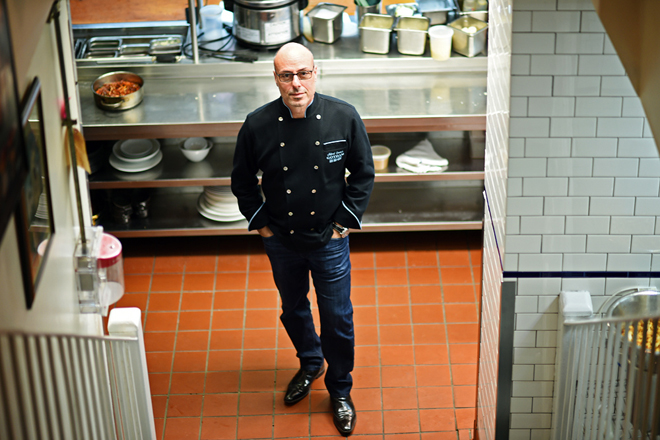 [Alfred Portale at Gotham Bar and Grill by Daniel Krieger]
There are certain longstanding relationships that really show how the restaurant's evolved in tandem with the landscape. You were one of the early chefs to start utilizing the Union Square Greenmarket and now that relationship's deepened with the summertime Gotham Greenmarket lunches.

Secondly, I had some great experiences cooking in France, but one of the things that I took away was sometimes they're not respectful of the seasons, at least not 30 years ago. You would find asparagus on the menu all year round. You would find fresh berries all year. And that bothered me. So when I returned from France, seasonality became an important organizing principle for me.

But you would have found that same lack of seasonality almost anywhere at the time on the East Coast.

On the East Coast but not on the West Coast. Not at all. You'd go to [a restaurant in New York] in January and they would have fresh cherries from God knows where, Chile, or something like that. It always struck me as being wrong, not to mention the fact that when you're serving ingredients out of season, schlepping them from halfway around the world, it's not cost effective and they're generally not at their peak.

So that was how I started 30 years ago. And of course now today this whole concept of "stay local" and farm to table is such a popular notion but a lot of restaurants, including Gotham, that's how we've been operating for 30 years. It's such an important relationship that we celebrate it every summer during the peak of the market and offer this menu series based on different farms that we choose each year.

Are you guys doing it again this summer?

I'm sure we will. We'll probably always do it.

The five chefs who are part of this anniversary dinner series that you're wrapping up this week — Boulud, Colicchio, Keller, Waxman, and Telepan — what was the thinking of the make up of that group?

Essentially, these were colleagues. In some cases we worked together here; in other cases I worked elsewhere with them. Like Daniel Boulud, for instance, I've always felt particularly close to him. My first job in New York City after I returned from France was when I was hired as Daniel's replacement as executive sous chef at the Westbury Hotel. His departure was delayed so I got to work with him for six months, and we developed a really strong bond. He had a lot of respect for me because I was at the time one of very few American chefs who had worked for Guérard and Troisgros and all that, and we developed a close relationship and friendship which meant a lot to me. Keller, same thing only different. Before Rakel, while he was in New York, we crossed paths many times, cooking at various events and also became close.

Now, Waxman is part of it because Jonathan was the one who told me that the Gotham Bar and Grill was looking for a chef. That's what brought me down here to begin with. And of course he's remained a very close friend over the years.

Colicchio, we worked together. He worked here very early on and of course went to Rakel afterwards and then he was chef at Mondrian. And he and I are good friends. And then Telepan was our sous chef here for many years. So that was the thinking. Both people that worked here but also people who are important people to me and to the restaurant.

Head over to Toqueland for more thoughts on Alfred Portale, and stay tuned for part two of Andrew's chat with the chef tomorrow.