In its glittering heyday, before being torn apart by civil war, Beirut was known as the Paris of the Middle East. Along its broad boulevards, seaside corniche, and historic souks existed a wealth of convivial sidewalk cafes, some serving Lebanese cuisine, some specializing in seafood, and still others outright French in outlook – reminding us that the country was once a colony of France. Named after Lebanon's signature spice mixture, Au Za'atar attempts to encompass the full range of typical restaurant food found during Beirut's golden age, styling itself an "Arabian French bistro."

In its glittering heyday, before being torn apart by civil war, Beirut was known as the Paris of the Middle East. Along its broad boulevards, seaside corniche, and historic souks existed a wealth of convivial sidewalk cafes, some serving Lebanese cuisine, some specializing in seafood, and still others outright French in outlook – reminding us that the country was once a colony of France. Named after Lebanon's signature spice mixture, Au Za'atar attempts to encompass the full range of typical restaurant food found during Beirut's golden age, styling itself an "Arabian French bistro."

Divided into three seating areas plus a handful of outdoor tables that run along Avenue A then turn the corner onto 12th Street, the décor might best be described as warehouse rustic – with bare brick and wood-paneled walls, a bar of salvaged timber and marble, plus cobbled-together tables at two heights. The prime decorative motif: wooden shipping flats of the kind favored by the trucking industry, serving as room dividers, wine shelves, and light bulb baffles. It makes the place look a little too much like your first college apartment. 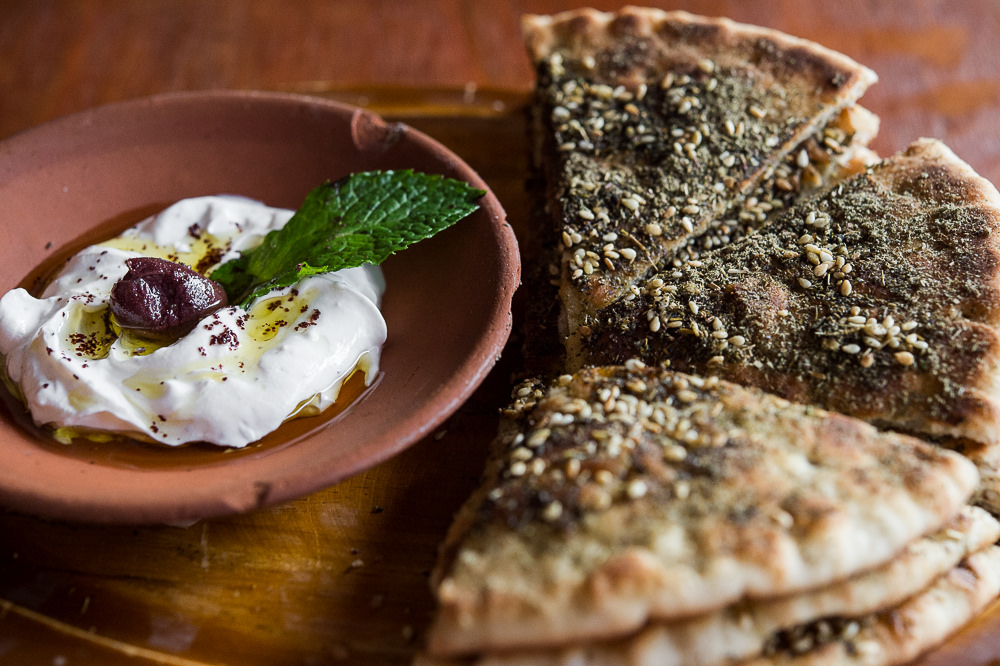 The menu is ambitious, encompassing 69 selections in 13 menu categories, with recipes from France, North Africa, and the Middle East sprinkled throughout. The homely little appetizing dishes known as mezze often show particular flair. One of the best arrives unbidden, and free of charge: a wooden tray of pitas dusted with the namesake za'atar, a combo of sesame seeds, crushed red sumac pods, and dried Levantine herbs. How the fragrance rises up when the warm bread hits the table! Alongside comes a saucer of labne, a thickened yogurt flooded with green olive oil. You could happily make a meal of just za'atar bread and labne.

And you've probably never tasted better babaganoush ($7). Light and fluffy, it flaunts a smoky aftertaste. Lemon has been applied with a light hand. Usually made exclusively with dried favas, the bean stew called foul (pronounced "fool") adds chickpeas and navy beans to the usual recipe, which reeks pleasantly of funk. One of the most delicious things on the menu is arnabeet mekle ($7), an oil-moistened heap of fried, copper-colored cauliflower decorated with fronds of flat-leaf parsley, making what might be a dull side vegetable sing. There are some misses among the mezze, too, including little triangular spinach pies hard as rocks, and stuffed grape leaves that unravel like a cheap sweater as they bounce onto the table. 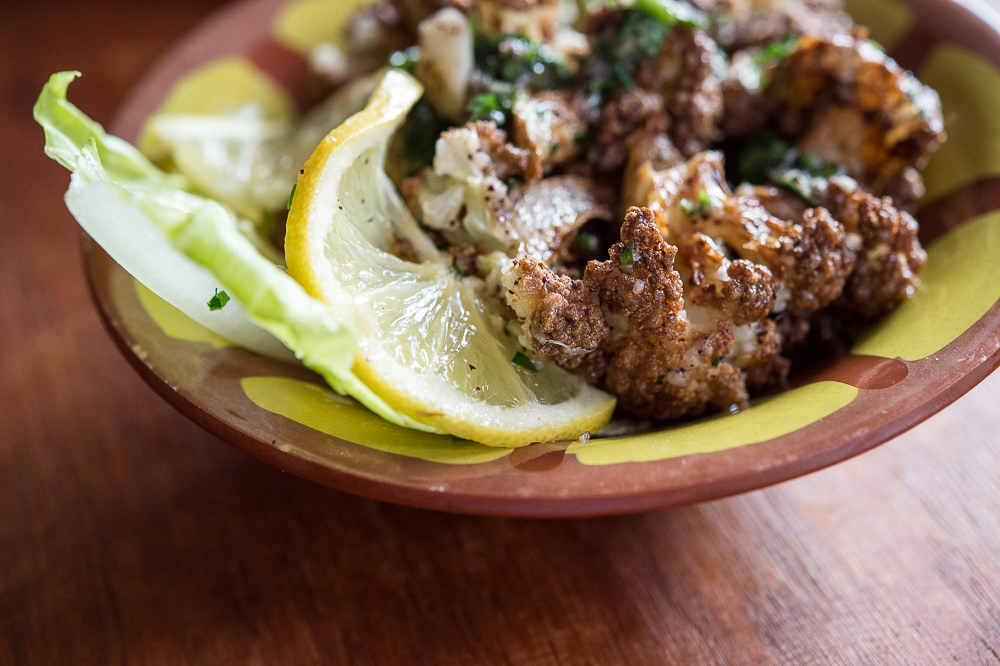 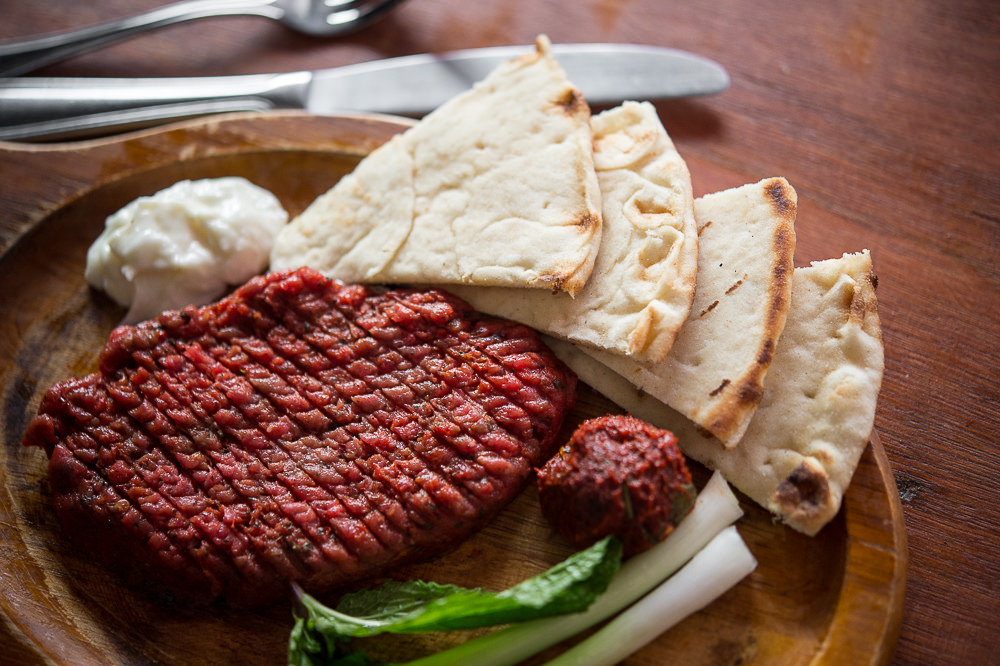 Often spoken of as the national dish of Lebanon, kebbe kras is a pair of cracked-wheat shells enfolding a plain ground-beef filling. I might have been satisfied with Au Za'atar's, except I'd recently eaten the ones at Bar Bolonat, which are more delicate and flavorful. The real gem in the meat-bearing mezze department is kibbe naya ($10), a tartare of raw lamb macerated with spices and served with three accompaniments: olive oil, the fiery paste called harissa, and toum – a fluffy white substance doubtlessly inspired by French aioli. But while the toum you get in the city's Lebanese mainstays like Cedars Meat House (Astoria) and Al Salam (Bay Ridge) burns your lips with garlic, Au Za'atar's is sadly bland. When it comes to raw garlic, who wants subtlety? Nevertheless, kibbe naya constitutes one of the East Village's best tartares, and well worth ordering.

Kibbe naya constitutes one of the East Village's best tartares, while couscous is unfailingly moist.

New York has a dearth of good North African restaurants, and couscous is the cuisine's most abused dish, dry as coarse sand blown by desert winds. Surprise! Au Za'atar's couscouses are unfailingly moist, and the one featuring three grilled lamb chops is, at $19, a very good deal. Another pleasant surprise is some of the French food. I was initially put off my feed by the frisee aux lardons ($13), which has few bacon lardons and lots of browned pita bits instead, seeming a little like bait-and-switch. Though quite beautiful with its two runny poached eggs plastered on top – the salad had no mustard vinaigrette to goose it up; in fact, no dressing at all. But the moules frites Dijonnaise ($16) swamped in white wine, mustard, and cream was totally on the money, with nice fries. And those same admirable fries came with steak au poivre ($18), a New York strip in green peppercorn sauce that was another of the menu's high points. 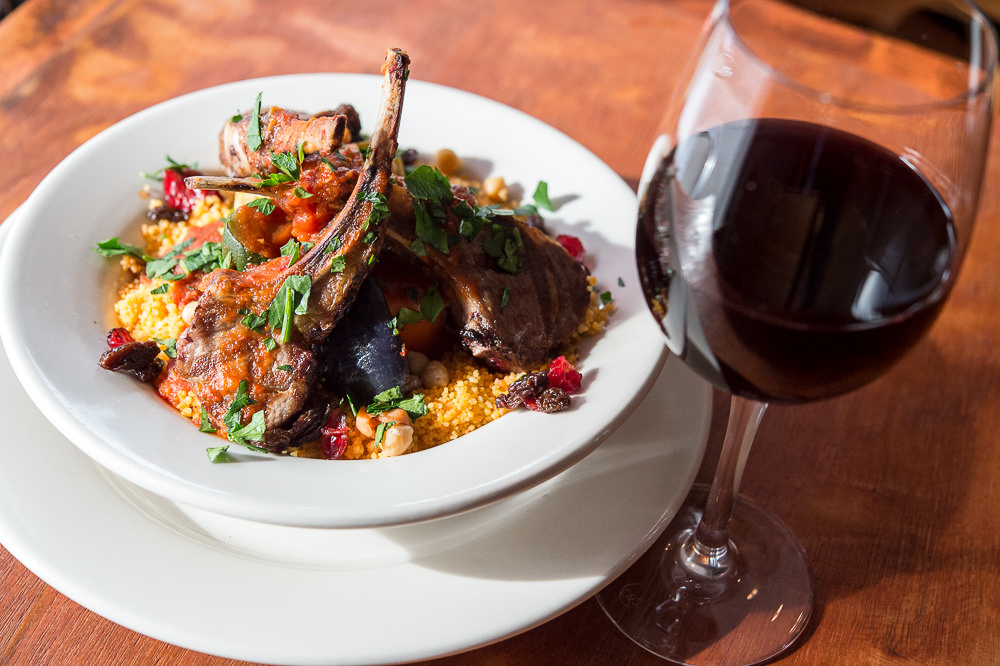 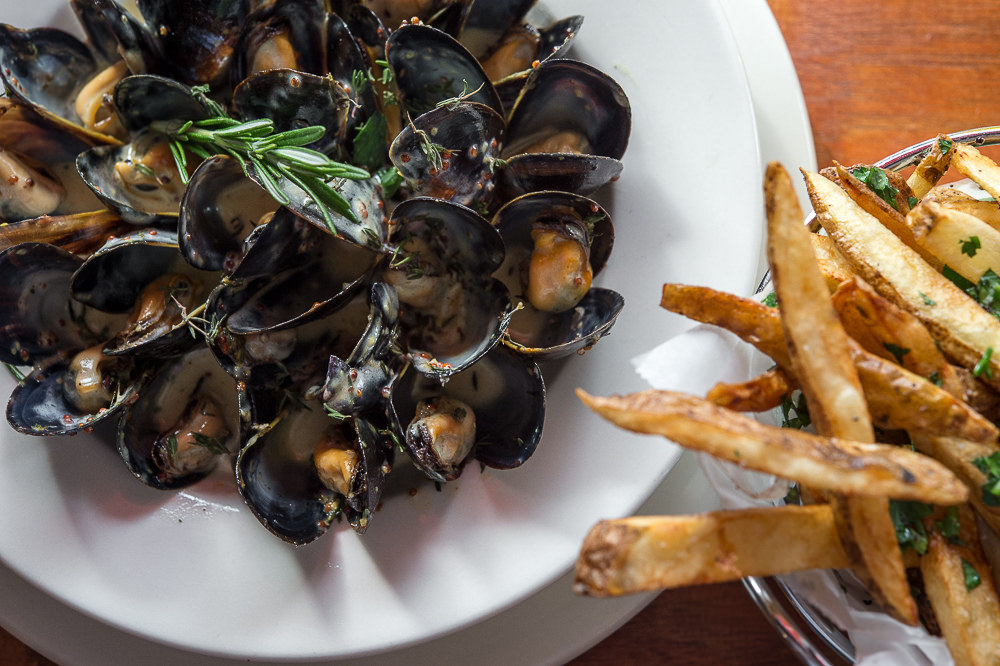 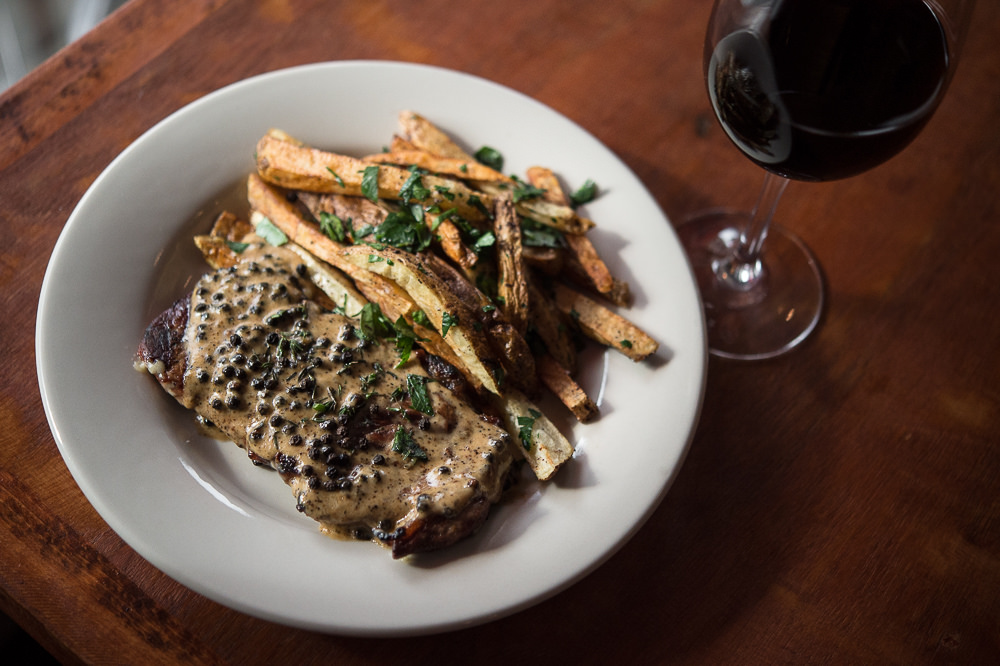 Ultimately, you may look at Au Za'atar's lengthy bill of fare and throw up your hands in indecision. Well, there is one ready escape valve from the pressure cooker of ordering. A set meal served family style is offered, representing a dependable selection of mezze and a heaping platter of fries and grilled meats –including merguez sausages, marinated chicken morsels, and lamb kebabs – plus a cubed vegetable salad, priced at $32 (for two) and $64 (for four). 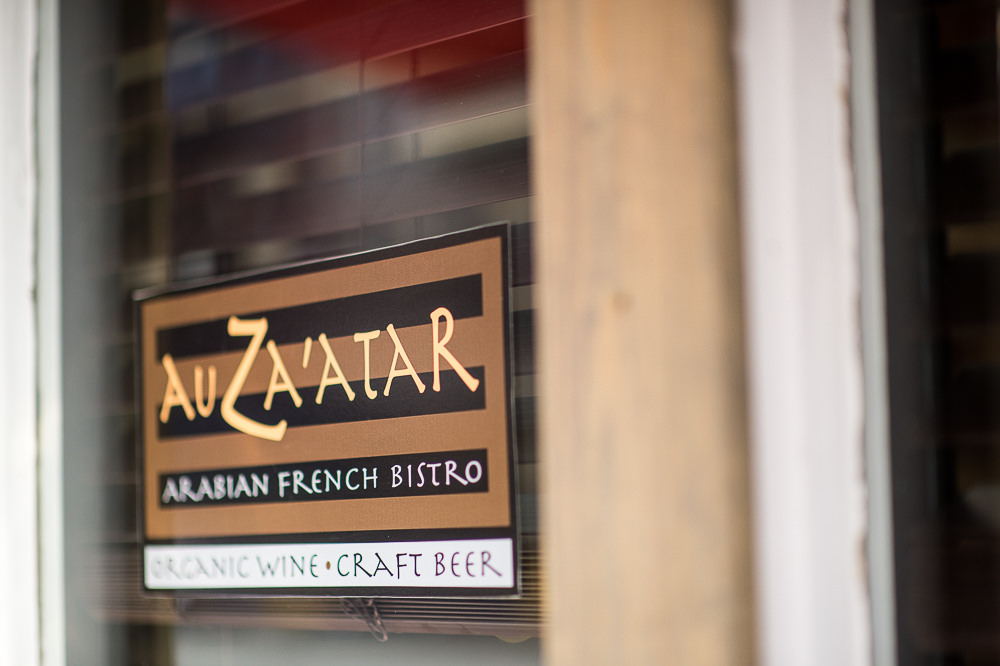 That's a bargain compared with the other restaurants in the vicinity, which have been turning this stretch of Avenue A into a thriving restaurant row. (Funny, I remember it as a crack zone not that long ago.) These set meals are also a bargain compared with the rest of Au Za'atar's menu: Order one, share it with friends, and leave well-fed. Yes, most of the adventuresome dishes are lacking, but what do you want, adventure or dependable food?

Our review of Au Za'atar

Cost
Dinner for two with a bottle of wine and one of the set meals, $75 pre-tip
Sample dishes
Kibbe naya (lamb tartare), couscous with lamb or chicken (meat lovers can go multi with couscous royale), arnabeet mekle (fried cauliflower), baba ganoush, steak au poivre (strip steak with green peppercorns)
What to drink
The Middle Eastern and North African wines are well worth checking out, including a Moroccan Ouled Thaleb chardonnay and a Lebanese Chateau Kefraya cabernet; the Original Sin hard apple cider matches nicely with the food; full range of craft beers available, but not sure who'd want to drink Left Hand Milk Stout with Middle Eastern food. Am I just being old-fashioned?
Bonus tip
There is nothing wrong with making a whole meal of vegetarian mezze, it represents the menu's greatest strength.