Long before there were 30-course, $1,000 dinners at Brooklyn Fare or $700, wine-paired tastings at Blanca, there was a little Brooklyn trailblazer called Saul. It was born in 1999. It was, with Peter Luger, one of the first two Kings County restaurants to earn a Michelin star. And I'm told it was once an excellent place to eat.

The first time I visited Saul back in 2012 in its now-closed Carroll Gardens space, my companion and I were among the only guests in the dining room. We spent about $200 on pasta with a poached egg and a few other forgettable dishes. It was April, and "Jingle Bell Rock" was playing on the sound system.

The second time I visited Saul was this month at its new location in the Brooklyn Museum, where the music (Neil Young) was better than the original, where the crispy octopus could've come from a high-end Spanish spot, and where the main courses were among the worst I've encountered in a New York restaurant. Has Saul's time passed? 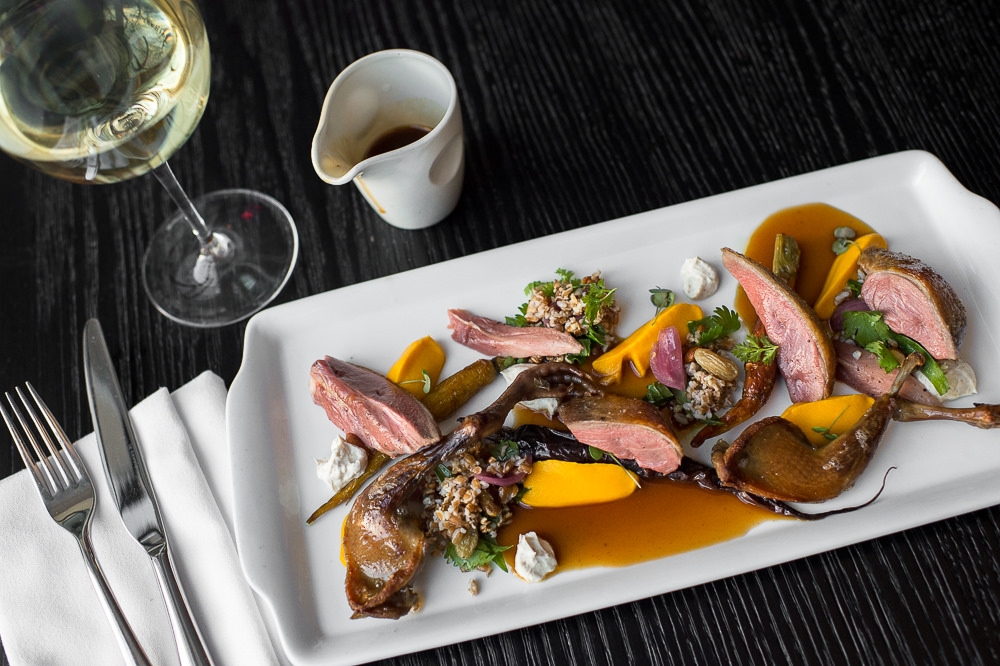 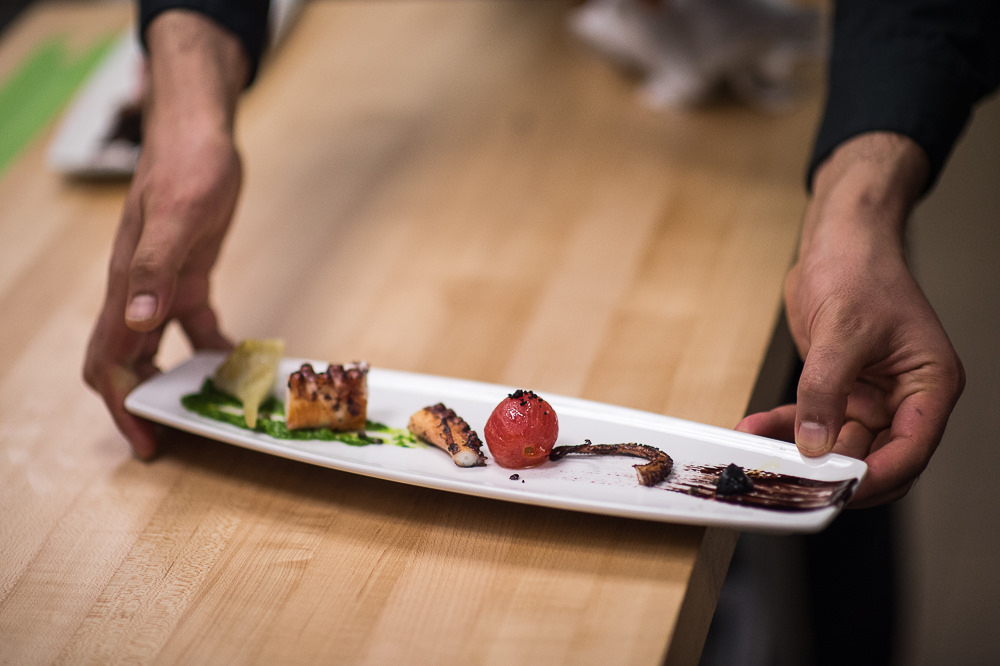 Atlantic bass was stripped of its succulent skin and rendered flavorless. A single lamb chop ($34) contained about three bites of meat and twice as much fat. Squab breast ($35) tasted closer to raw than rare while its undercooked skin would've been better suited for the jaws of a Rottweiler.

And then there was an off-the-menu daiquiri, sour, viscous and, somewhat different from a traditional version. "It was probably made with lemon," a waitress told me during a later visit. "We don't have any limes in the restaurant." So while other venues have found ways to deal with the temporarily high price of that citrus fruit by eating the cost or raising prices, Saul has stopped carrying them altogether.

So there's your neighborhood hospitality for you. Though keep in mind that Saul is no longer a mom and pop shop.

Museums, along with stadiums and concert halls, have been overhauling their culinary offerings this past decade to cater to gastronomic-savvy guests.

While the chef is still Saul Bolton, the venue is a collaboration with Restaurant Associates, the company that caters many of the exorbitant charity banquets that your hedge fund buddies invite you to; they also run other museum restaurants like Wolfgang Puck's The Source at The Newseum in Washington and Marcus Samuelsson's American Table at Lincoln Center. And if you want to drill down even further, Restaurant Associates is part of Compass Group, a global foodservice organization with a market cap of £16.89 billion (USD ~ $28.4 billion). Too bad these smart folks can't figure out the economics on limes.

Saul has, however, figured out how to charge you a bunch of money. The tasting menu is $85. Not a single dinner entree is under $30. And an a la carte meal will easily run $100 per person.

Pol Roger, the only bottle of Champagne, costs $110, a higher starting price for high-end French bubbly than other, better restaurants. And a $15 glass of Domaine Daulny sancerre took about a course and a half on the tasting menu to warm up from its frigid state (the other whites were chilled perfectly). 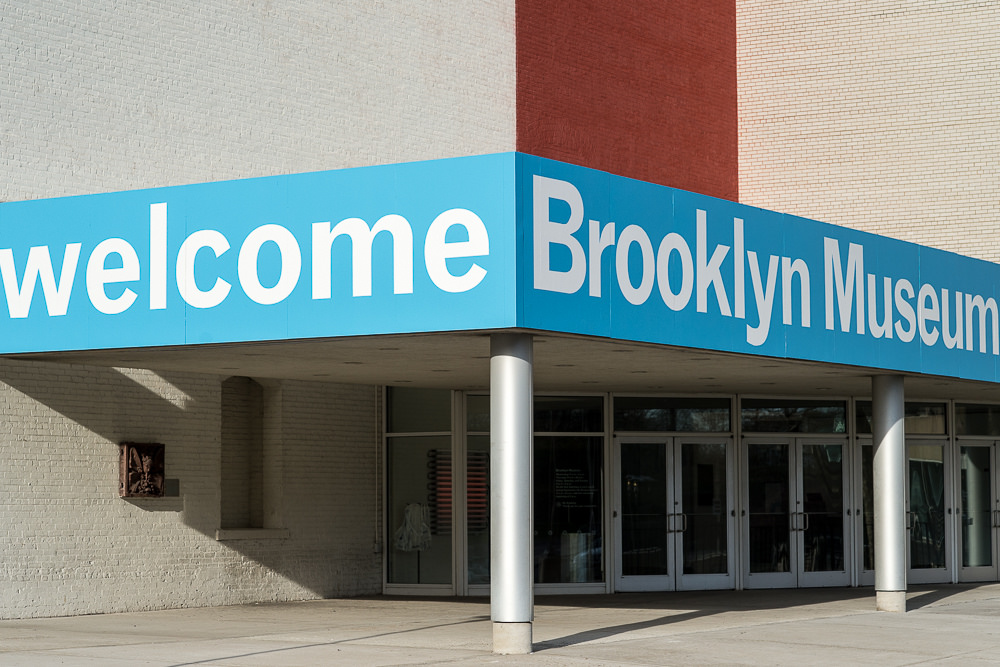 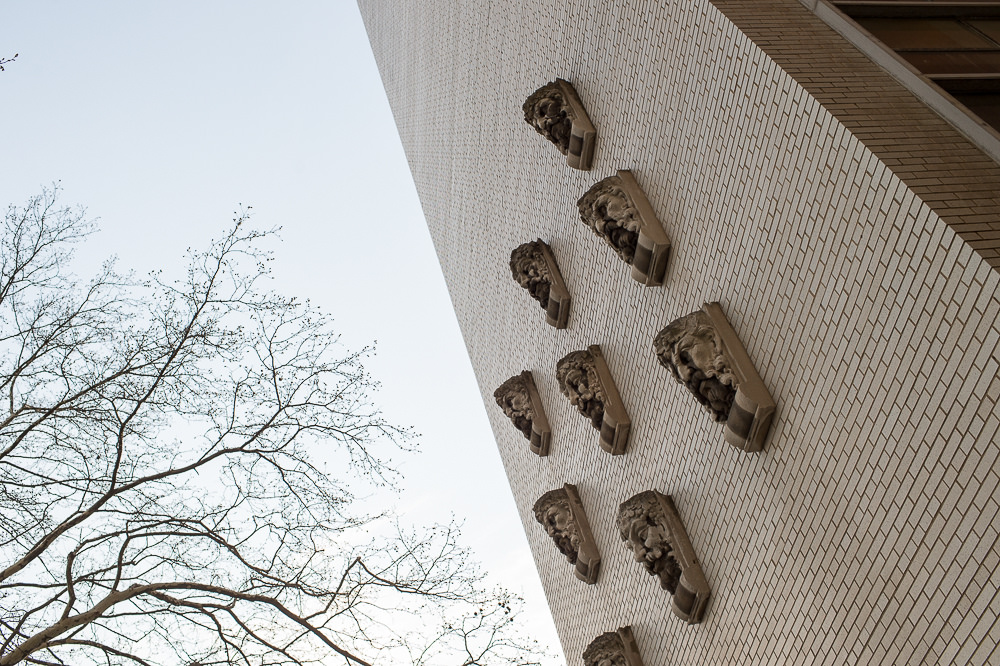 Museums, along with stadiums and concert halls, have been overhauling their culinary offerings this past decade to cater to gastronomic-savvy guests who'd rather not pay a markup for heat lamp pizza or other fare inspired by the local prison commissary. The trick of course is to accommodate daytime or early-evening eaters who want to get in and out fast (or back to the exhibits), while also courting destination diners who can fill the restaurant and settle in after the museum closes. Danny Meyer has perhaps struck this balance better than anyone else at The Modern, a Michelin-starred spot with small plates in its bar room and set-menu dining in the back. Even better: Patrons can directly access Meyer's packed space from a lively stretch of 53rd Street in Manhattan.

To directly access Saul, you walk around the exterior of The Brooklyn Museum and enter through the back by the parking lot. But that's the long way. Most will enter Saul through the front, walk past a security guard, continue on through an empty museum lobby, hang a left, then a right, past another security guard, then through a set of doors that leads to a hallway with chairs stacked on top of the tables. The hosts may or may not greet you on the way in or out. Charming, right? 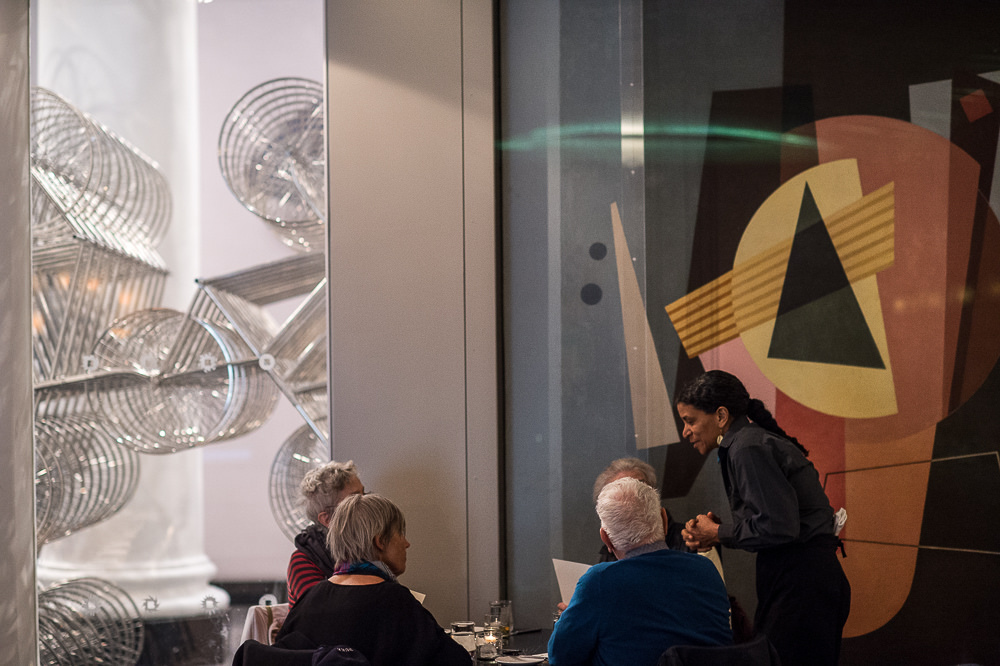 And then there's the question of ambience. When dining in a museum, it's nice to actually see the museum. Those seated in the spendy back room at The Modern are treated to a panoramic view of that institution's famed sculpture garden via floor to ceiling windows. Those who dine at Saul might have partial views of the wrong side of a bike exhibit. I say wrong side because there was a spotlight shining on it from the opposite side, and into my eyes, on Saturday. 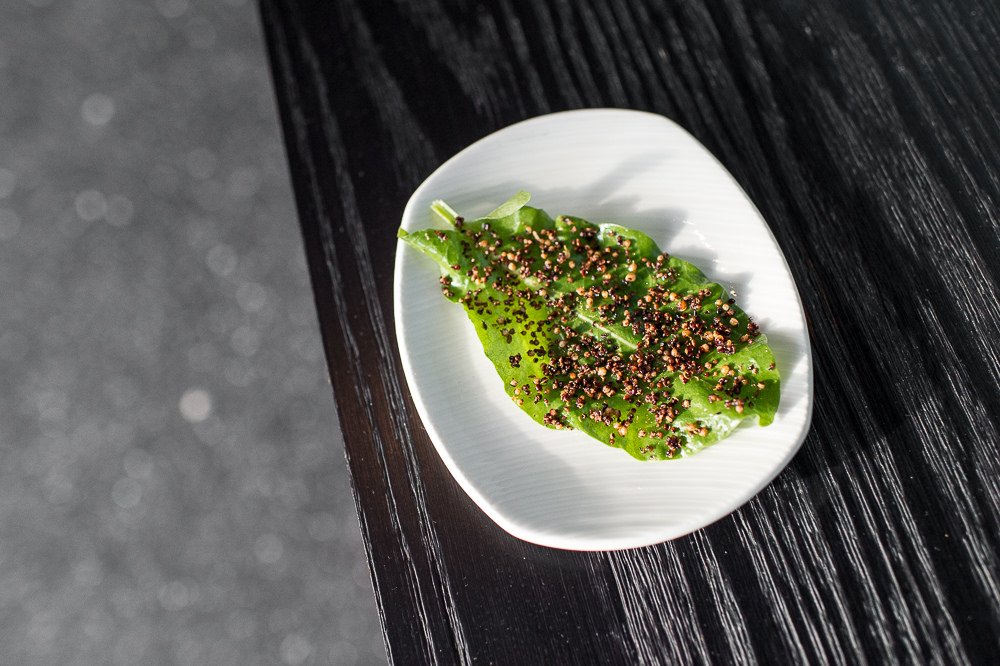 Yes, you forget about some of these ignominies when the amuse arrives. The chef sends out a sorrel leaf topped with toasted quinoa and a hint of maple — a "leaf taco" that bursts of citrus and sugar. And Saul is a serviceable enough space for a glass of Peter Zemmer pinot noir ($15) with a plate of charcuterie ($18); the meat platter includes heady lamb terrine, passable head cheese, silky liver pâté, smoky rabbit rillettes, curried cauliflower, and pickled crosnes.

Then you notice that you're sitting funny; it's because the seats are too narrow from back to front, imparting the sensation that you might slide off. In other words, Saul, with about half the charm of Houston's or any other restaurant located in Long Island's Roosevelt Field shopping mall, is not where you want to have a tasting menu.

The $85 tasting menu starts off right but hits some major speedbumps.

To be fair, that $85 option starts off right, with a vinegared oyster, and a sweet-sour beet salad that somehow rises above the mediocre ubiquity that dish has attained in recent years; Saul throws in a few dried strawberries, gooseberries, and just enough vinegar to keep all the sugars in check.

Then you're served a cup of vegan carrot-ginger soup that wouldn't pass muster at Whole Foods. Nasty stuff. It's also large enough to serve as a small meal in itself. That's followed by a preternaturally sweet diver scallop. Right on. Too bad the mollusk is paired with a Persian lime-spiked labneh that tastes precisely like what would happen if someone accidentally dumped a packet of unsweetened Purplesaurus Rex Kool-Aid into a vat of yogurt. 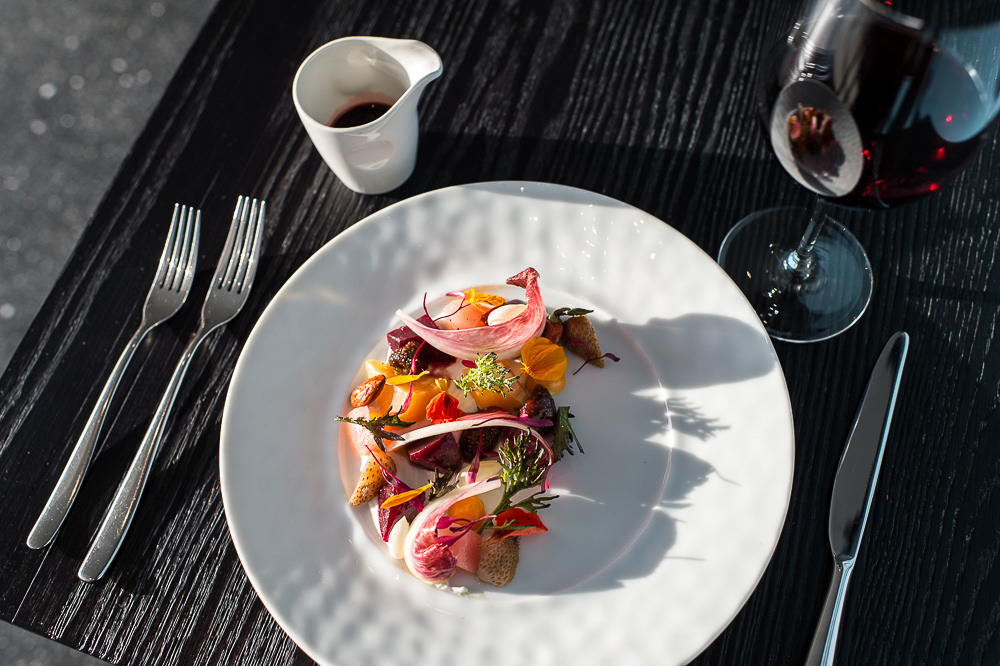 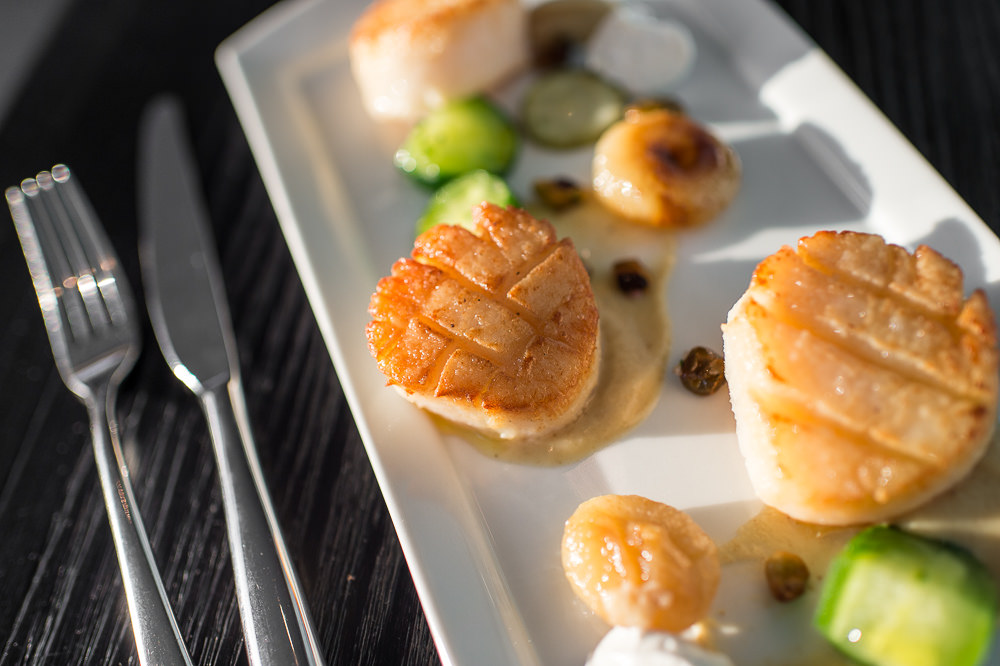 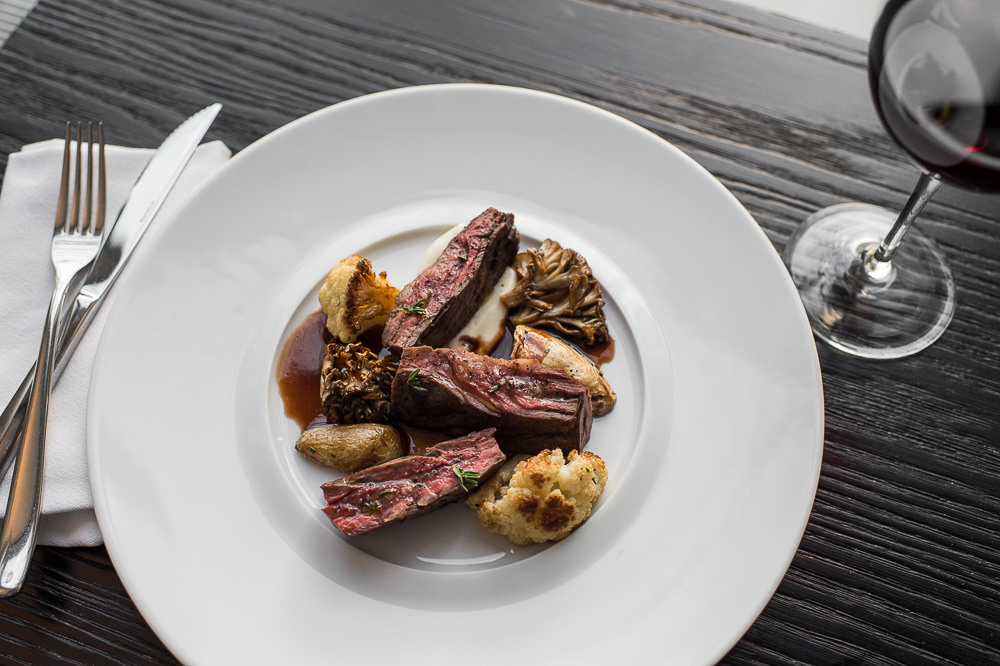 And whoever is cooking the Wagyu skirt steak isn't rendering out the intramuscular fat, and as a result I chewed over fifty times to render one of the pieces swallowable. Cracking a winter lobster with my bare hands would've been less burdensome. The meal ended with a leaden macaron so dense it could double as a protective jewelry box, as well as a pâté de fruit whose density was closer to Chuckles than a good French candy.

Smart folks will take their post-Museum meals elsewhere, perhaps at Marco's just a mile away, serving one of New York's best rotisserie chickens. But the unlucky who are dragged to eat here should order a la carte, and they'll be in and out quickly enough, as Restaurant Associates runs a tight ship with fine service. 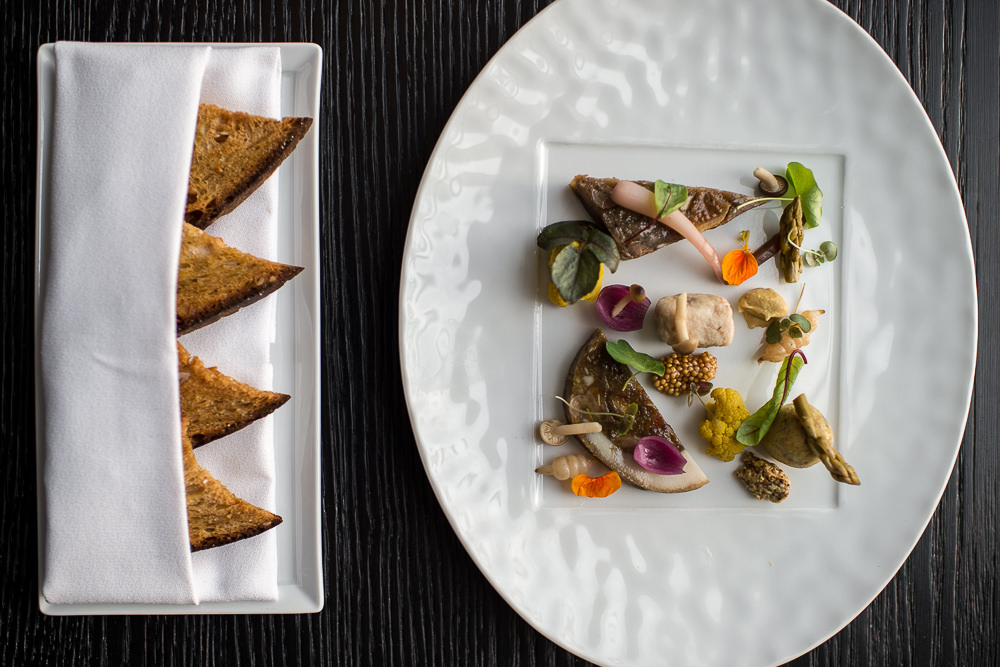 There are no snacks, mid-courses, small plates, or nose-to-tail, large format feasts, just old-school appetizers, entrees, and desserts. So do the charcuterie platter, as well as the beet salad or raw fluke with chile and lemon. Halibut with butter and peas flakes like it should in a three-star restaurant, and rabbit three ways (breast, leg, and fatty rib) scores three ways. Pork chops ($35) boast as much musk as dry aged game; too bad they're as tough as leather. A serrated knife barely cuts through the meat and the skin is so toothsome it would be better off tanned, laced, and thrown into the end zone.

Desserts — those tasting menu mignardises aside — are impressive. Panna cotta is infused with the sweet, vegetal flavor of asparagus; pea sorbet on top adds a grassy jolt. And Baked Alaska turns out to be a lemon meringue tarte with inverted proportions; there's twice as much soft egg white as sour lemon curd. Clever.

Then you walk out and see one of the hosts is checking her iPhone while the other is staring at a computer. Saul, once a Brooklyn trendsetter, is now just another museum restaurant.

Our review of Saul

Cost
About $100 per person for an appetizer, entree, dessert and two glasses of wine. Tasting menu is $85; a three-course prix-fixe (mixed green salad, plus chicken or scallops and dessert) is $45. Lunch is $28 for two courses or $60 for the tasting.
Sample dishes
Not the tasting menu. Do the charcuterie platter, any raw fish special, the Halibut, the rabbit, and the spring pea panna cotta.
What to drink
Wine, priced at $10-$15, with Champagne is $25. My Old Palenque cocktail (Mezcal, sherry, ginger-agave syrup) was so cloying I poured water in it.
Bonus tip
Reservations accepted but dining room was never more than half-full during my visits. I'm told there will be outdoor seating during the warmer months, where guests will overlook the sculpture garden. And the parking lot.