Big Hing Wong and Other Great Cheap Places in NYC

Share All sharing options for: Big Hing Wong and Other Great Cheap Places in NYC

I won't lie, the first time I entered it was because of the name. Ten years ago the small Cantonese café near the corner of Grand and Allen was called the New Manpole Restaurant, and between then and now it has undergone at least four identity changes — seemingly with the same crew in charge. Recently it's been re-dubbed Big Hing Wong. Throughout this time, the place has remained steadfastly a duck shop, of the kind that once existed on every block of Chinatown before the Fujianese toddled in. 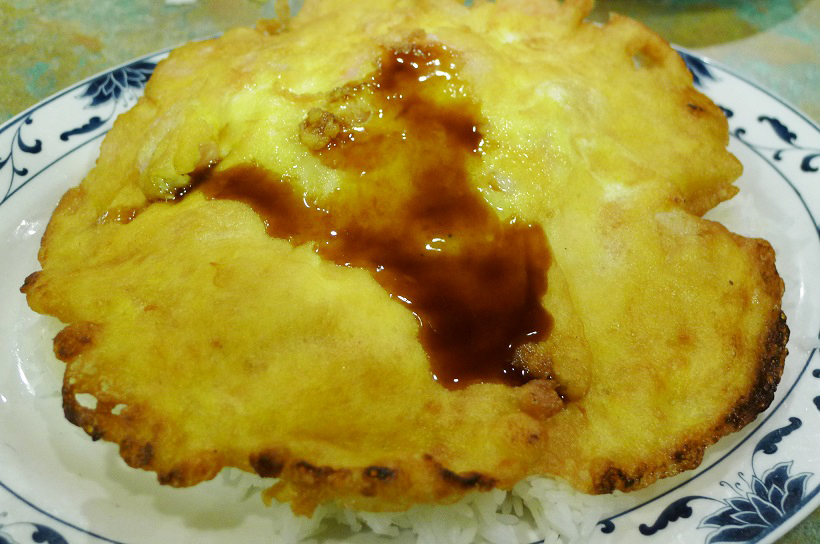 Over-rice meals continue to be particularly inexpensive, averaging $5, including shrimp with scrambled eggs (shown), which is almost like a crepe, weighed down with crustaceans and drizzled with salty brown charcuterie drippings. 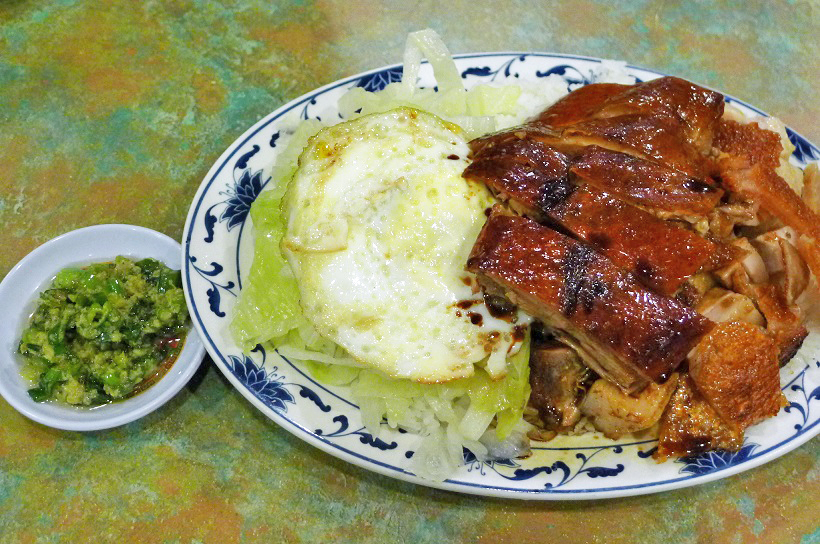 But why not take advantage of the expertly prepared Chinese charcuterie? Any two selections from the front window over rice (the picture shows duck and baby pig) comes to $6, and arrives with tons of rice, steamed cabbage or other veggie du jour, and, if you know to ask for it, a wonderful scallion-ginger relish prepared on the premises. Just ask for "green sauce." A fried egg is a desirable addition, and costs just 50 cents. Apart from that, the menu lists dozens of stir-fries, congees, noodles soups, and lo meins, Hong Kong style. And the last time I went, they'd added a menu of OK dim sum, the best of which was rice noodles stuffed with ground beef and cilantro. Still, better to get your dim sum elsewhere. (300 Grand St, 212-925-1662) 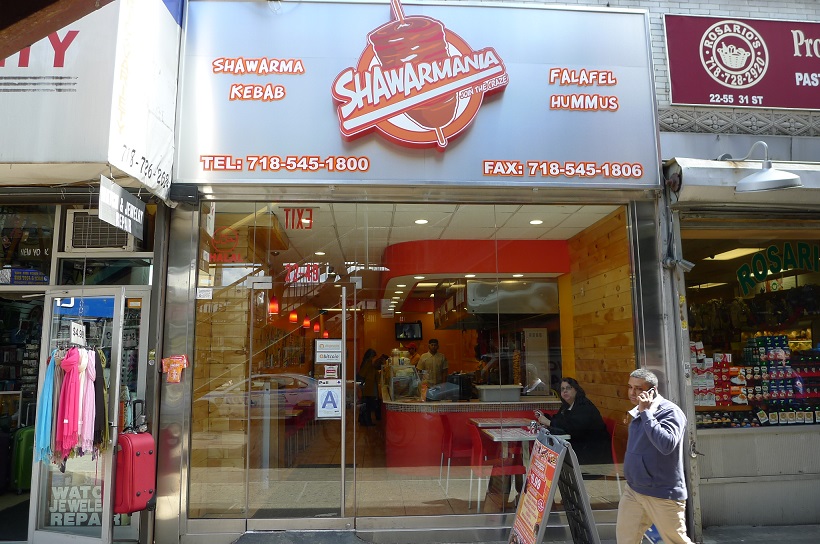 Shawarmania is the jazzy name for a new Egyptian spit-roasted meat specialist under the Ditmars station in Astoria, brightly colored and brightly lit, with plenty of comfortable seating and pictures of the pharaohs and the pyramids in a cartoonish style. Two types of shawarma (a/k/a gyro) were available when I visited, chicken and beef, though the menu also lists lamb. A good first exposure to the place is the combination shawarma sandwich ($5.99), a gutbomb of meat oozing juices, pickles, tomatoes, tahini, and — at your request — the fluffy white Levantine garlic sauce called toum. 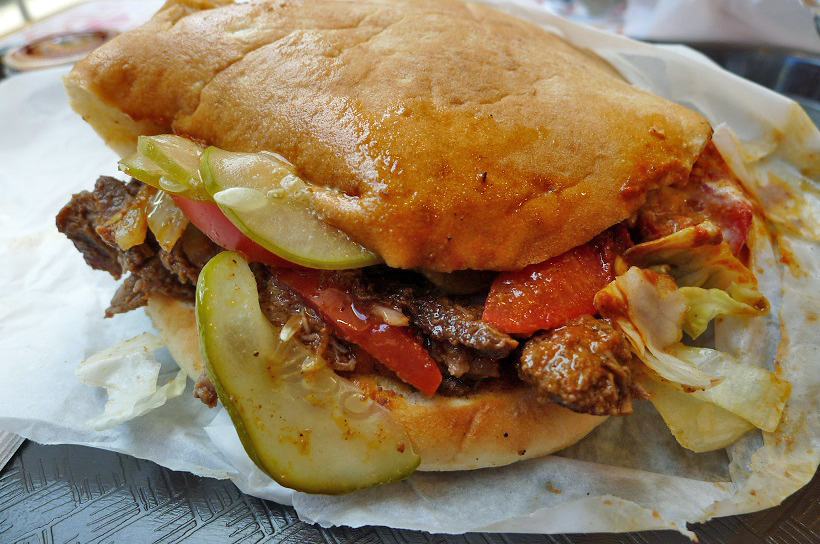 The sandwich uses a thicker than average pita that absorbs lots of juices but miraculously fails to fall apart. I also bought a tub of babaganoush which was distinguished by a light texture and some nice chunks of aubergine. Lots of salad and other vegetable matter on the menu make this a nice destination for both carnivores and herbivores. (22-49 31st St, Queens, 718-545-1800) 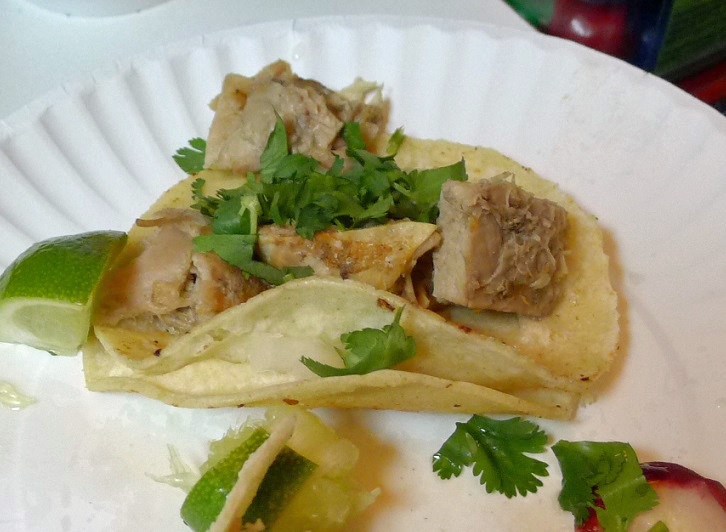 Thankfully, the best taqueria in Bushwick is also the cheapest. Taqueria Izucar, named after Izucar de Matamoros, a city in southwestern Puebla, turns out the little, double-corn-tortilla tacos sometimes called taquitos. Number one on its lengthy list is suadero, braised veal flank (shown). It looks something like canned tuna, but the flavor is rich and subtle, especially when squirted with the green sauce from the bottle on the counter, tart and fiery. The other taquitos are worth trying, especially the oreja (ear), buche (pig stomach), and Arabe (spicy pork). Vegetarians especially will appreciate the "de papa" taco, which comes stuffed with stewed potatoes — though be forewarned a thick lard haze hangs heavy in the taqueria's air at all times. 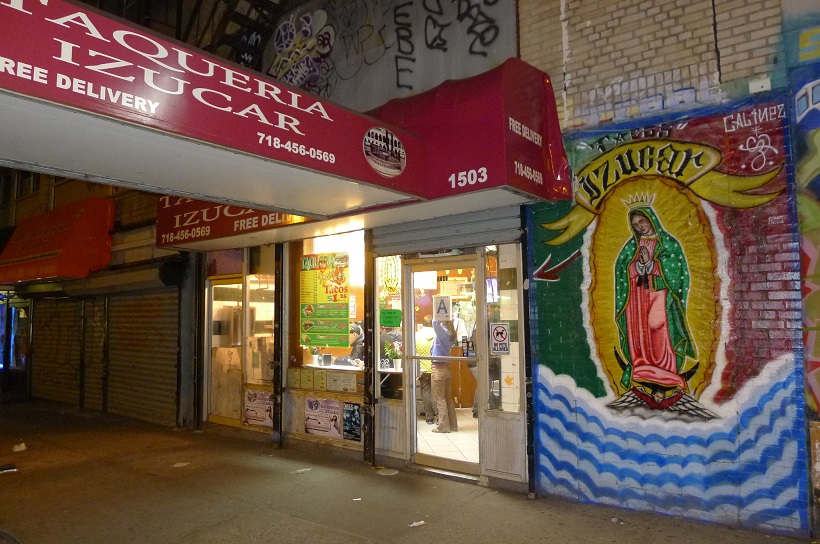 The tiny place under the M tracks is heralded by a life-size painting of the Virgin of Guadeloupe, who welcomes you with her outstretched arms. There's barely any room inside, with a narrow shelf where you may eat your taquitos standing up, and a menu that also includes tortas, cemitas, tostadas, and hamburguesas. This is not country-folk food, but food for urban sophisticates. The most maddening thing about Taqueria Izucar is the unpredictable nature of the hours. I've found it open at one a.m. at night and bustling, and with the gate pulled down at five p.m. in the afternoon. And, by the way, the tacos are only $1.25 apiece. How's that for cheap?

· All Posts by Sietsema [~ENY~]
· All Cheap Restaurant Recommendations [~ENY~]

Three Great Cheap Places You Should Know About