First Glimpse: Savoury on the Upper West Side

Share All sharing options for: First Glimpse: Savoury on the Upper West Side

The New York area has several distinct collections of South Asian restaurants, and they tend to be grouped by neighborhood. Jackson Heights glories in its all-you-can-eat Punjabi buffets, while Jersey City flaunts their polar opposite: South Indian vegetarian spots, some specializing almost exclusively in dosas. Curry Hill along Lower Lex has the city's best aggregation of regional cuisines, including South Indian, Gujarati, Mumbai-style fast food, Indo-Chinese, Pakistani, and cafes that pride themselves on presenting dishes from several Indian cuisines at once. Coney Island Avenue has its Pakistani cabbie hangs, while Staten Island specializes in Sri Lankan.

The East Village's Sixth Street is traditionally Bangladeshi, though other types of restaurants have infiltrated over the years including Anglo-Indian and pan-regional. But the most-overlooked hotbed of Indian cuisine is the Upper West Side. There, sprinkled along its bustling avenues and right on Broadway are at least 20 slightly upscale spots, with formal service, white napery, and lots of plate-polishing going on. The menu remains mainly Punjabi, of the brown-gravied, ginger-heavy sort — though lately regional dishes similarly heavy on the meat and seafood have been added from places like Kerala, Goa, and Tamil Nadu. Neighborhood diners clearly like their Indian food meaty and in multiple shades of brown. 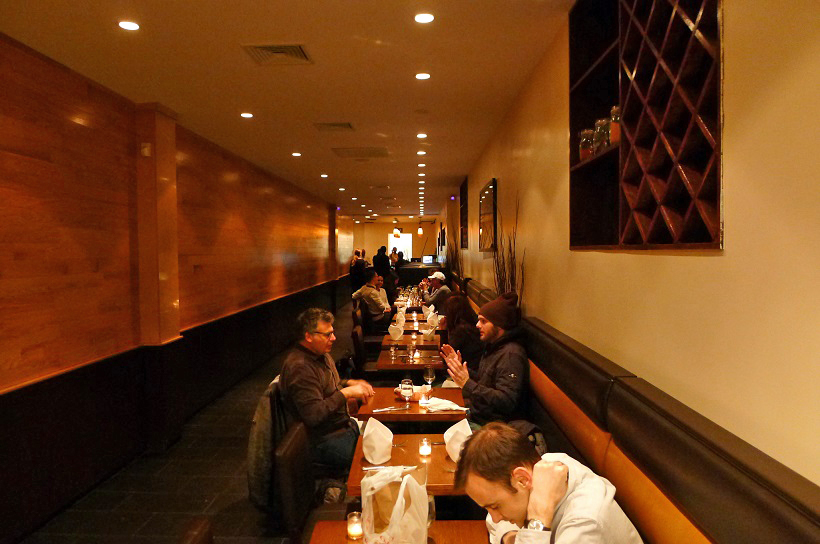 Now another place has joined this collection, with an unusual pedigree. Opened recently on Columbus Avenue near the corner of 83rd Street, in an area crammed with more restaurants than you can count, Savoury is successor to the long-lasting, but now defunct, West Village restaurant Surya. It opened on Bleecker Street in 1998, concentrating on "Modern Cuisine of South India," according to the hype. And indeed the menu introduced Chettinad fare from Tamil Nadu to our city for the first time, including nandu varuval (soft-shell crabs in a sharply flavored tamarind sauce) and koli chettinad (chicken in fiery coconut milk). In a review published at the time, I noted enthusiastically, "One of Surya's most appealing aspects is its willingness to wield the chile pepper."

But over the years, Surya sadly declined as the emphasis switched to more northerly Indian fare, and the business plan came to favor carryout and delivery over putting bodies in seats. So, news that a new successor to Surya had popped up on the Upper West Side naturally engendered the question, Which Surya are we talking about, the old or the new? Design-wise, Savoury fits perfectly in the Upper West Side Indian restaurant canon: a dark room that runs narrow and deep, culminating in a bar and expanded room with a table for large groups. Art appears sparingly on the walls; the bar, for now, is liquor-less. BYOB from the wine store on the same block. 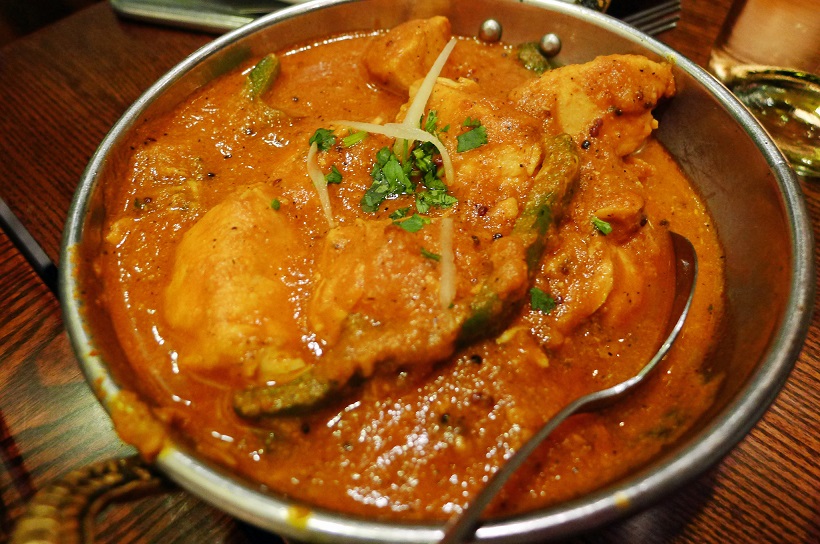 [Kerala pepper chicken]
A glance at the menu indicates the second version of Surya is the dominant influence, with lots of northern Indian standards such as chicken saag, chana masala, pooris, lamb rogan josh, dal makhani, and a very full selection of tandoori meats. My crew of four naturally gravitated toward the South Indian stuff, but with a sprinkling of North Indian dishes that more perfectly reflected Upper West Side preferences. From the South we tried Kerala pepper chicken ($16), referring to India's southernmost state. Unfortunately, the dish was made with skinless, boneless, soulless white chicken breast, the pieces floating like so many marshmallows on a surf of sauce. The sauce lacked the promised curry leaves, and instead of green chiles, we got green bell peppers. 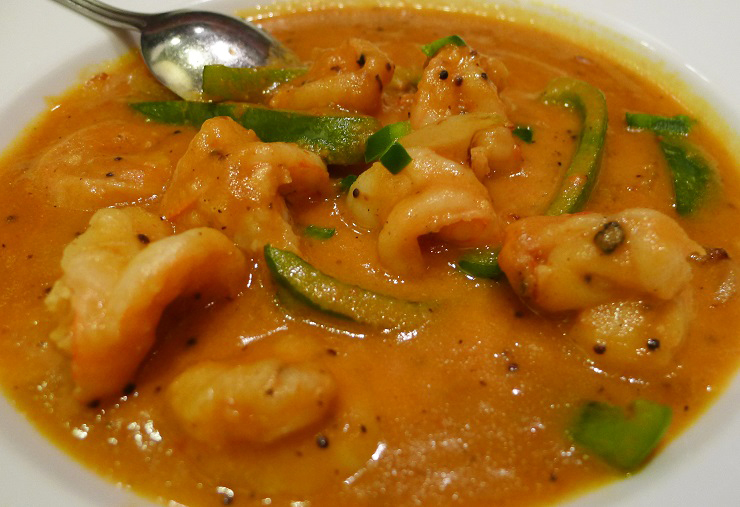 [Konju pappas]
Also from Kerala, konju pappas ($19) fared better, featuring nicely peeled and deveined shrimp of substantial size in a sauce dominated by black mustard seed, but low on the quantity of coconut milk. But once again, as with the Kerala pepper chicken, the heat was minimal, verging on the non-existent. These are dishes that are supposed to be fiery. There was a bit more spice in the lamb rogan josh — a Punjabi specialty laced with cardamom and saffron. Note that all these main courses were turned out in decent size servings, and were freshly prepared — they simply lacked the pungency one might hope for. It's easy to say they were being tailored for Upper West Side tastes, but I know plenty of people up there who like spicy food (including a dining companion, who muttered throughout the meal how much spicier the food was at Indigo, another Indian restaurant down the street). But we thoroughly enjoy lasuni gobi ($7) — lightly breaded cauliflower in a sweet clear glaze, and Cochin jhinga — another shrimp-driven dish from Kerala. 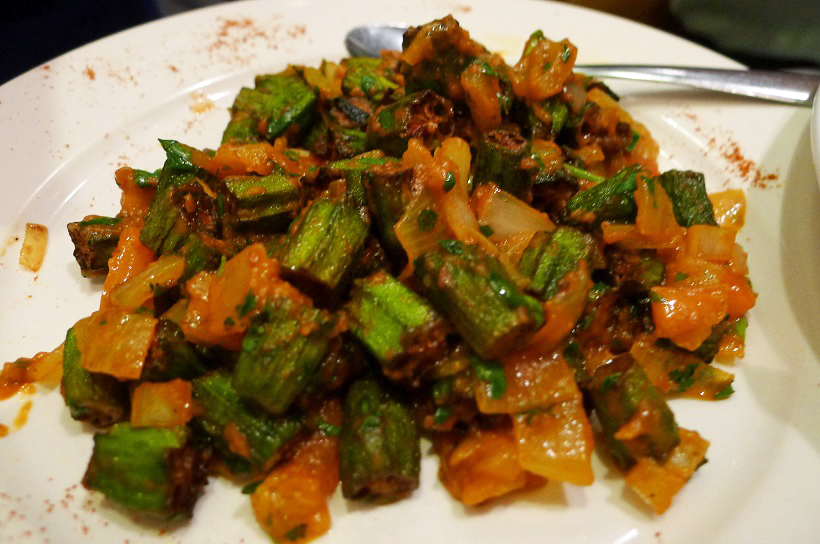 [Spiced okra]
Both of those were apps. The vegetarian entrée spiced okra ($13), a Mughal dish from northern India, found the pod crisply stir-fried with onions and possessing minimal slime. It was the second best thing we ate that evening at Savoury. 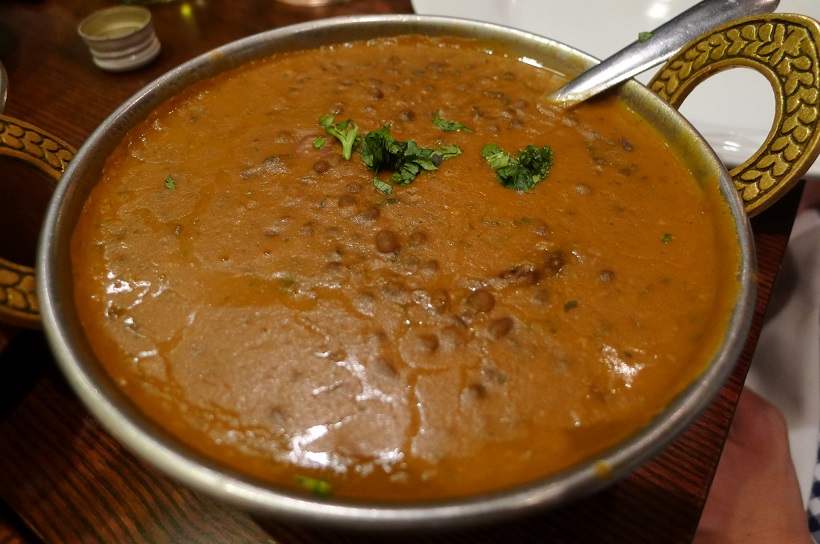 [Dal Savoury]
Best was another Punjabi classic, proudly called by the menu "dal Savoury," even though the common name is dal makhani. It features black lentils in a thick gravy tasting of ginger and cumin. 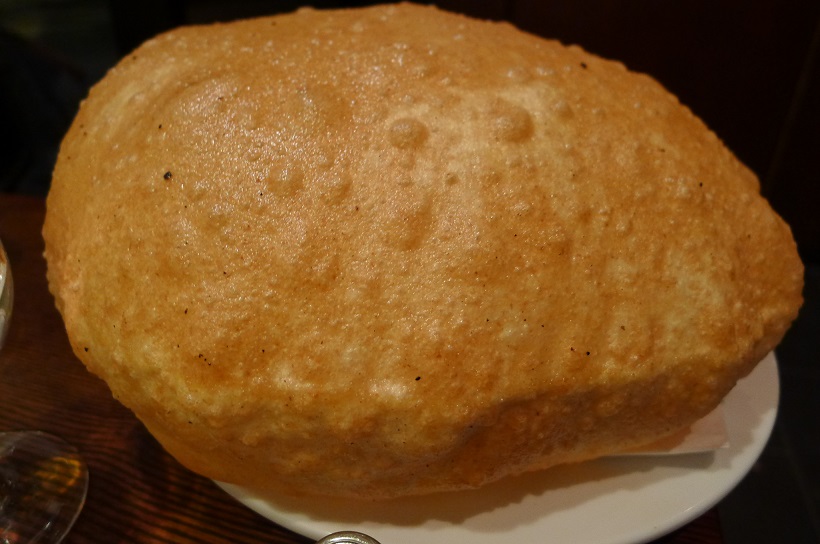 [Poori]
We ate several decent breads and desserts that evening, but, really, at this point there's little to distinguish Savoury from any of the other Punjabi places on the Upper West Side. That is what denizens of the neighborhood want — or so the restaurateurs think. But until the menu adds a few more interesting things, and trusts the gringos with chiles, the potential of this place lies in being a favorite in the immediate neighborhood, since there's virtually nothing about it that would lure you in from a remote location. Which is a shame, because the original Surya was a quasi-revolutionary spot.