In each installment of Pastry Cases, sweets fanatics and lovers of (most) things baked Charlotte Druckman and Gabriella Gershenson (of Every Day with Rachael Ray) share a favorite baked good, chocolate, ice cream scoop, or other delectable delight worth the sugar high—and the trek. In this week's edition, the cake addicts go to Momofuku Milk Bar, where they special order a limited edition Christina Tosi creation that shows off the pastry chef's perverse genius in all of its high-low glory. 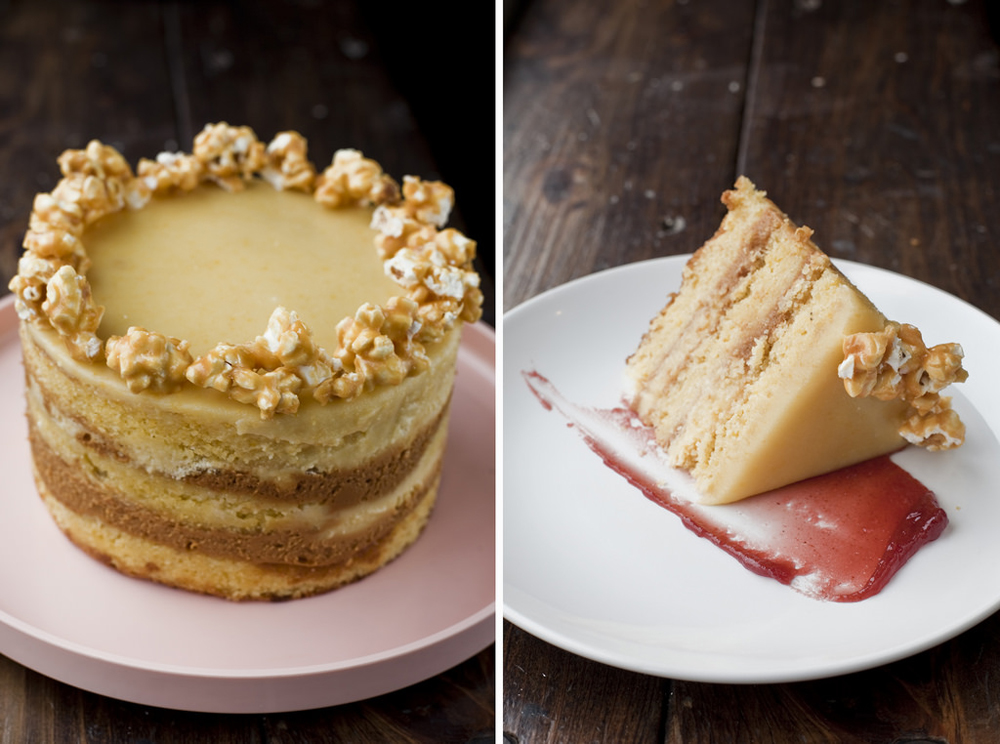 [What a beauty! This is how Christina Tosi's popcorn cake looks when it's first brought to your table at Momofuku Ssam Bar (left); and this is how it looks when it's plated, by the slice with a smear of jam. All photos by Paul Crispin Quitoriano.]

GG: This is a rare occasion where you get to pick two weeks in a row. What gives?

CD: I went to Momofuku Ssäm Bar for a rib-eye dinner a few weeks ago and everything changed when a surprise dessert showed up.

GG: It came after a huge Momofuku large-format meal? And you still got a boner for it?

GG: Wow. They brought a whole cake to the table?

GG: And then you wrangled one for us after the fact, because you said I had to try it. How'd you manage that?

CD: I emailed Tosi et al. and asked if I could pre-order.

GG: And she was game! Because she's an enabler! 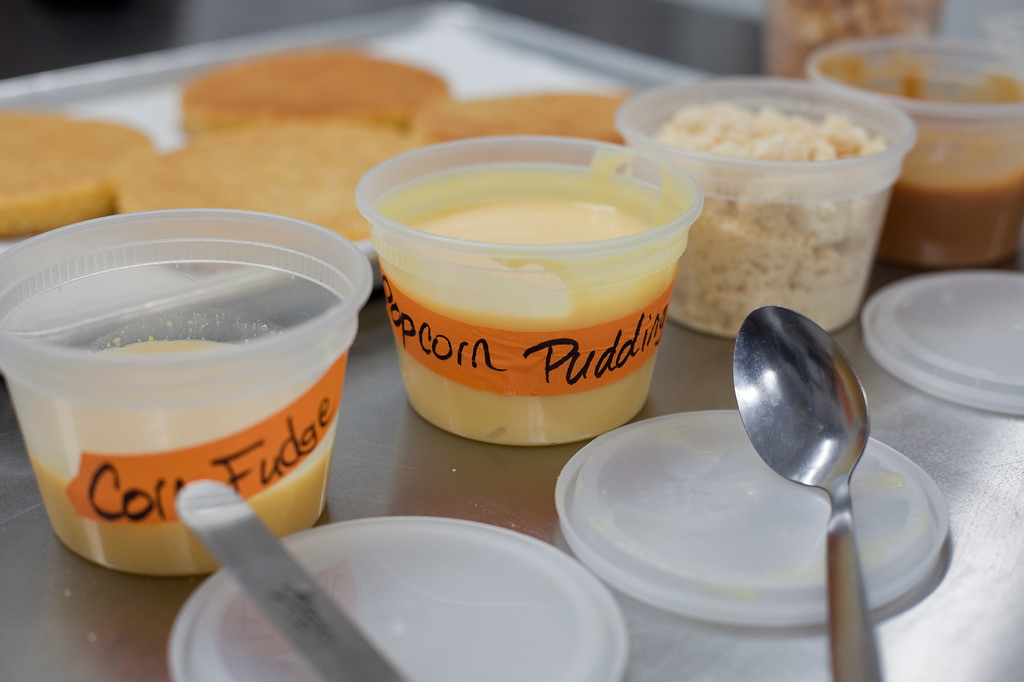 [At the assembly station, the mise en place includes all the cake's components.]

CD: Exactly. I hoarded that popcorn cake like it was diamonds—one half for you, the other for me.

GG: It was so fresh; they really did make it just for us.

CD: That top layer of corn fudge alone is just ridiculous, is it not? And it has that sweet little ring of crunchy caramel corn around it. You kind of just want to stick your face in it.

[Four tiers of cake ready for stacking; ground popcorn is incorporated into the batter.]

GG: There were so many components…

CD: I had to ask Tosi to explain it. It's very complicated but the inspiration is so simple. Her favorite thing to have at the movies is popcorn and Coke, and she wanted to pay homage to that. When the Ssäm crew tried the first cake Milk Bar presented, they didn't love the Coca Cola factor. So the Milk Bar folks 86-ed the pop, and kept the popcorn. Now we have a popcorn cake: Ground, sifted popcorn is folded into the batter, which gives it a nice, thick, grainy crumb. Then there's salted caramel—easy enough. There are also popcorn crumbs—you know Tosi and her "crumbs." And there's a popcorn pudding made on the stovetop, like mom used to do with cornstarch. Plus, each layer is treated to a popcorn milk soak, so the flavor's intensified. 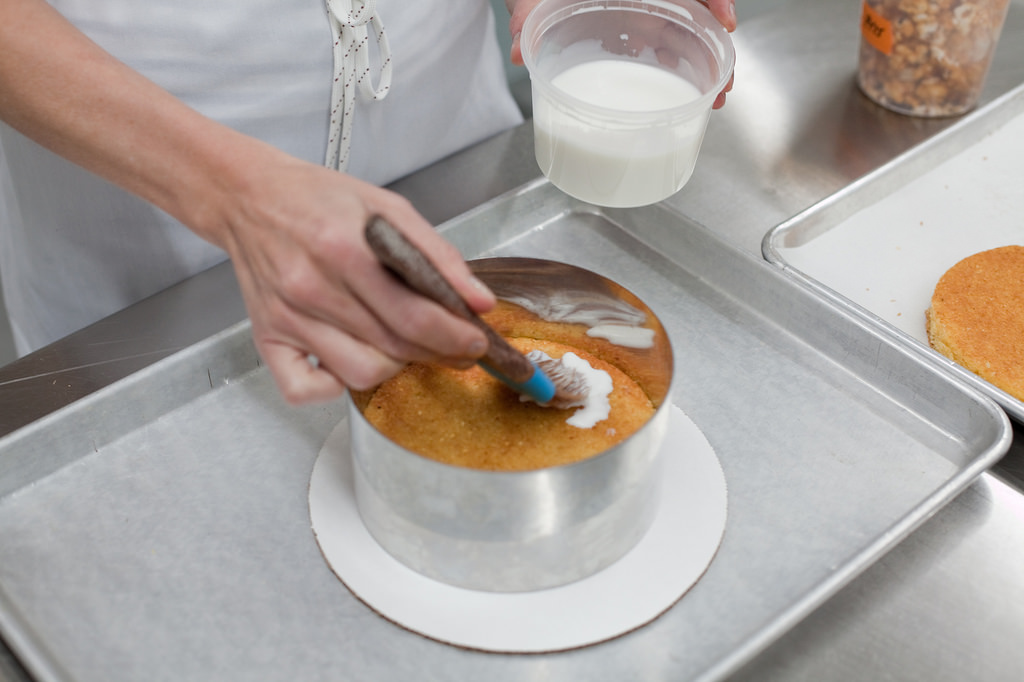 [After each tier is set down in the ring mold, Tosi applies a popcorn milk soak for maximum flavor infusion.]

GG: When I tasted it, what I really sensed was a buttered popcorn cake, and then the vinegary salty pickled tri-star strawberry jam served with it made it taste like a jam butty, one of my favorite things—a sandwich with salted butter and strawberry jam on white bread. 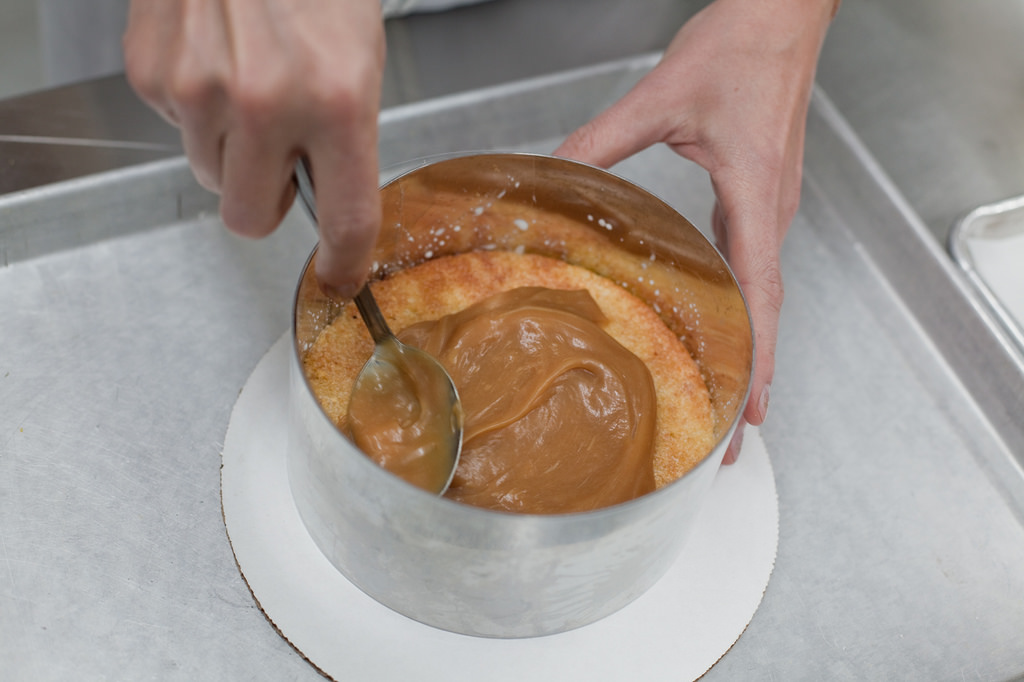 CD: Normally, you'd have jam in the cake, but I love it as a condiment. When you and I tasted the cake, they packaged the jam in a large container so we could add as much as we wanted. At Ssäm Bar, after they present your cake (like a prime rib!) they slice it and each person's plate has a huge slab and a side swoosh of jam to drag your bites into. 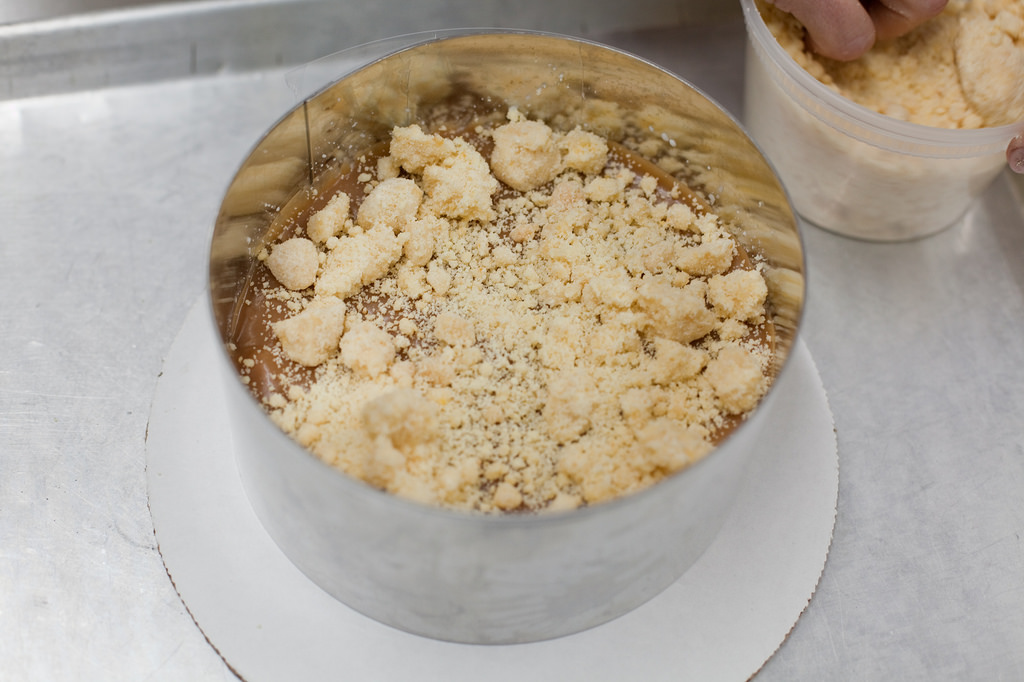 [For some textural contrast, a layer of crumbly-sandy popcorn crumbs made in the style of milk crumbs.]

GG: I think I was so taken with having as much jam as my heart desired that I was cool with having it on the side. But I do love a jam layer in my cake. Can we talk about Tosi's frosting philosophy for a moment? The first time I saw Milk Bar's wedding cakes they enraged me. I grew up watching my mom, who is a caterer, painstakingly put a crumb layer and then frosting on her wedding cakes. On Tosi's the sides are simply left bare; they aren't even frosted. It's like she stopped well before the cakes were finished. That seemed very "fuck you" to me, knowing how much effort it takes to frost a nice cake.

CD: As is true of the popcorn cake, Tosi's frosting is so concentrated you don't need as much. I've always liked the rough look of the exposed layers and I wonder what it would be like to grow up in a world where the Milk Bar layer cake aesthetic is the norm. It's a pretty gutsy, naked cake. Often, frosting is used to hide mistakes. 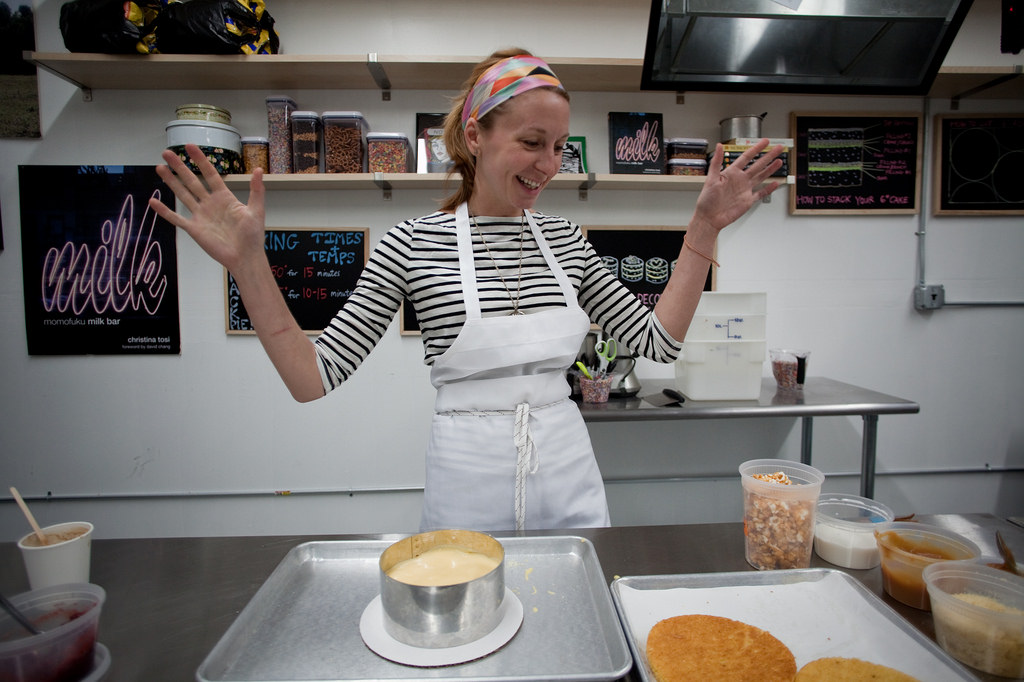 [And the crowd cheers after Tosi smooths a layer of popcorn pudding on her cake.]

GG: It's so "more is more." You're right, the last thing it needs is more frosting. I'm over it now but it was quite a shock at first. So, why did you respond so wildly to this cake? I really dug it, it's so peculiar and great, but it hit a tender spot with you.

CD: I loved how incredibly clever it was and that it tasted so fucking good at the same time, and then, how much care went into it. To infuse that popcorn flavor into every element takes a lot of work and planning. And yet it's playful, too. It's so very Tosi—no shortcuts, but so much fun. This cake is the kind of thing that made me take notice of her when she first got to Momofuku Land—before Milk Bar—at Ko. 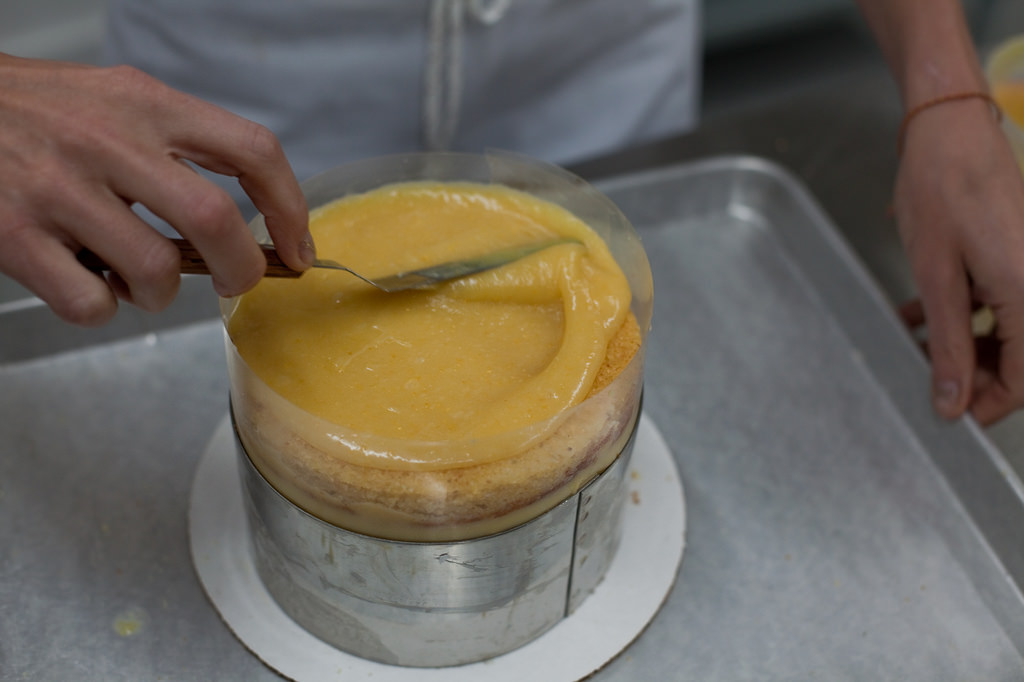 [For the final layer fudge--corn fudge.]

GG: I am thinking of a slice now. Cutting into the cake was so satisfying. It really was like cutting into a stick of butter. And the flavor. On the one hand, I had to almost force each bite down because it was so rich; but on the other hand, each bite made me smile with the salt and the tang and the cloying thickness of the fudge, and those over the top caramel cloaked popcorn pieces on top that you mentioned earlier. It's a cake that made me say "mercy." 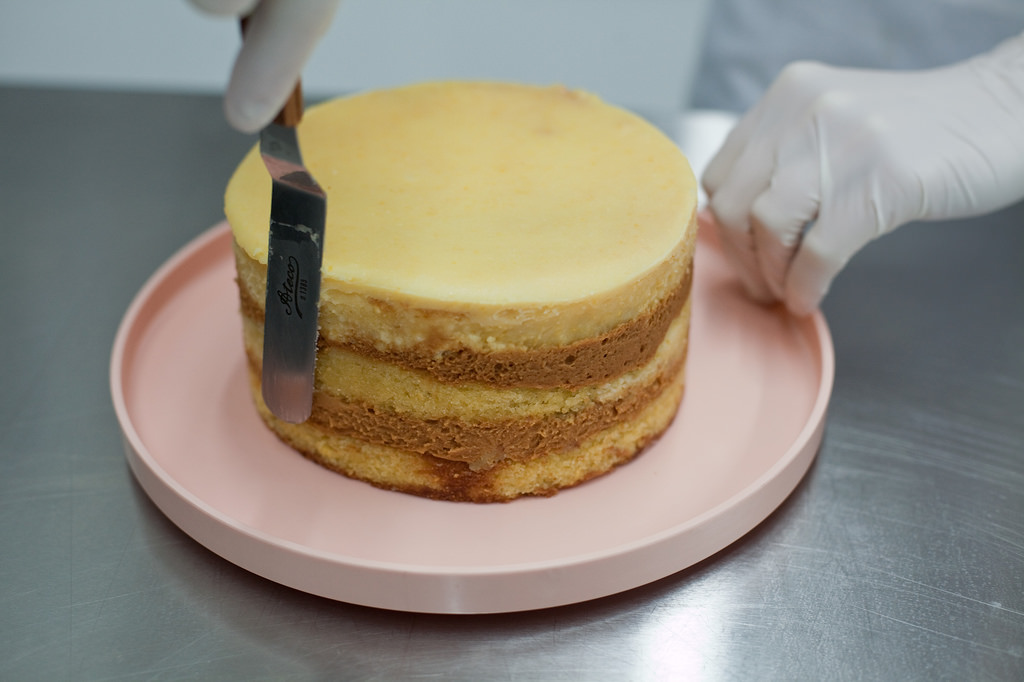 [Smoothing out the rough, exposed edges.]

CD: Because I knew we were going to be chatting about this cake for all the people, I thought it would be worth finding out if maybe, for a short time, New Yorkers could order themselves one from Milk Bar and pick it up. And they can! It'll be a limited run (around 50) and only available until May 11 or until the limited run sells out, so people need to act fast to secure their tower of popcorn power ($38 for a 6-incher).

[A wreath of caramel corn garnish brings the crunch.]

GG: So cryptic! So exclusive!

CD: That's what we're here for, to let the people in on the secrets. 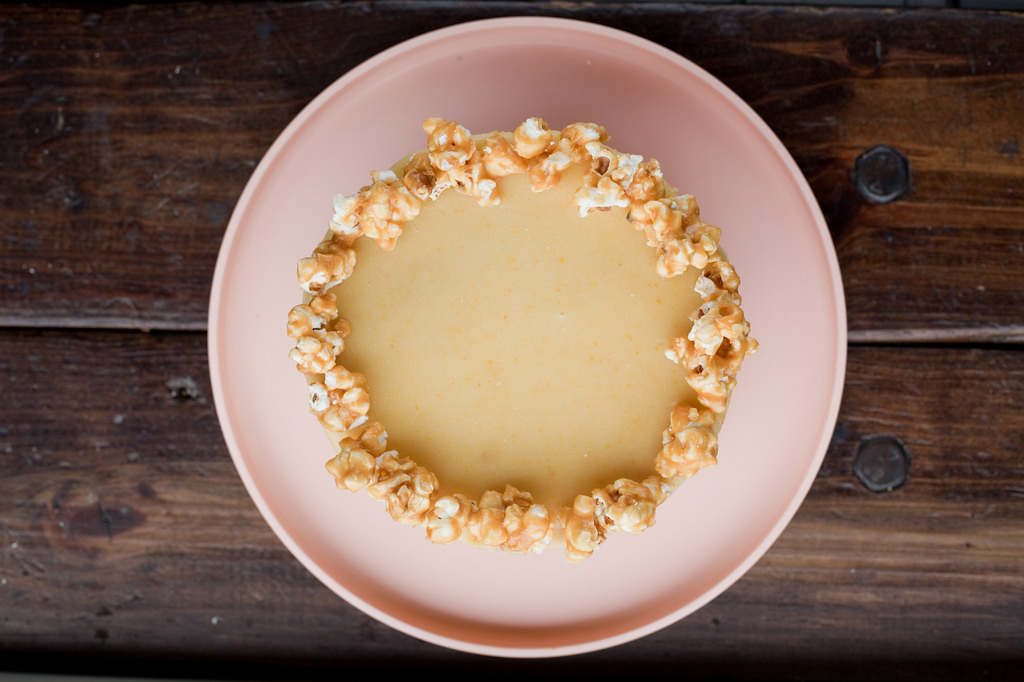