My credit card statement says I've been dropping a few more dollars than usual on shrimp balls, habanero fried chicken, and vegan (!!!) rice cakes at Momofuku Má Pêche in Midtown. For those spending sprees I have a brand new David Chang innovation to thank: Price-less food carts. It's another brilliant effort by an expensive restaurant to magically help us forget how much we're paying. Well, at least until the bill comes.

And that's not necessarily a bad thing. One hundred percent price transparency, while great on restaurant websites, doesn't necessarily make for more enjoyable meals. Eating out would be pretty miserable if the price of your hay-smoked squid steak were etched onto the reclaimed driftwood it was served on, if waiters gave lectures on Champagne markups while pouring $75 glasses of bubbly, and if iPads were affixed to each table displaying a course-by-course feed of how much we'll owe American Express in 30 days.

Traditionally, restaurants help soften the blow of the bill via a time honored method: Large quantities of alcohol, often served under the euphemism of "beverage pairings." Smart venues like Blanca go even further, doing away with pesky menus and the prices printed on them. And smarter spots like Elizabeth and Trois Mec have you pay for the whole thing in advance, which is great if you just want to get up and walk out like a gangster with your fly-ass in-laws when you're done.

The disappearing menu is a pretty clever parlor trick, which is what brings us back to the Chambers Hotel in Midtown and the curious case of Má Pêche, a four-year-old restaurant that might be the first ambitious à la carte spot to pull off this feat. And while you might end up spending more than you'd planned, I'll argue the gamble is (usually) worth it with food this good. Chef Paul Carmichael's refined-global fare, veering from Japanese (sashimi) to New York-ese ($450 haute halal) to Korean (kimichi stew) to West Indian (jerk chicken wings), is as good as or better than what Momofuku's more popular Ssäm Bar has been putting out as of late. 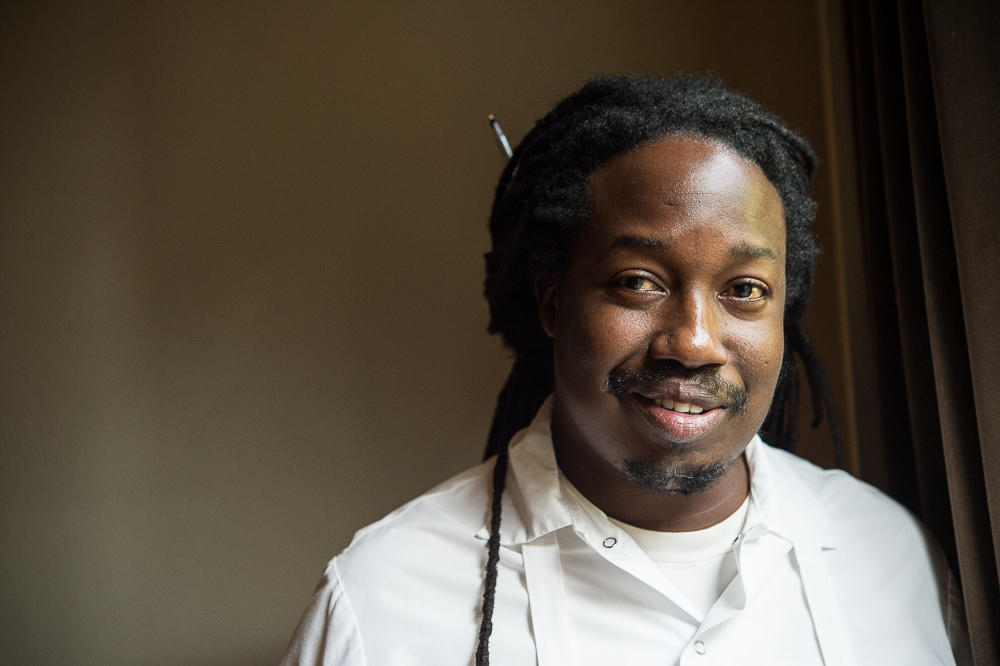 Yes, there technically is a menu, but you don't really order off of it and it's entirely likely you'll never look at it (or its prices) during your meal, because your server, rather than showing you the list of offerings, rolls it up into a cylinder and places it in a glass like a bar tab at your local pub. Nothing to see here, folks.

The process is simple: The food comes to you, and you decide whether to partake or pass.

Think of it as a tasting menu joint where you only pay for what you want.

Think of it as a tasting menu joint where you only pay for what you want. There are over 50 items, virtually all of which you will be shown as waiters and chefs periodically swing by with trays, carts, and trolleys in a relatively seamless process that cumulatively doesn't take up any more time than the seven minutes you'd spend blankly staring at a four-page menu elsewhere. Such a system, which alternately recalls a Brazilian churrascaria, a Chinese dim sum palace, and your local shopping mall's by-the-pound hot lunch buffet, really is a smarter way to dine. You make an emotional, visual connection with every single item offered. It's the culinary equivalent of meeting people in real life, rather than mail ordering your dinner date from a Match.com profile with no photo. 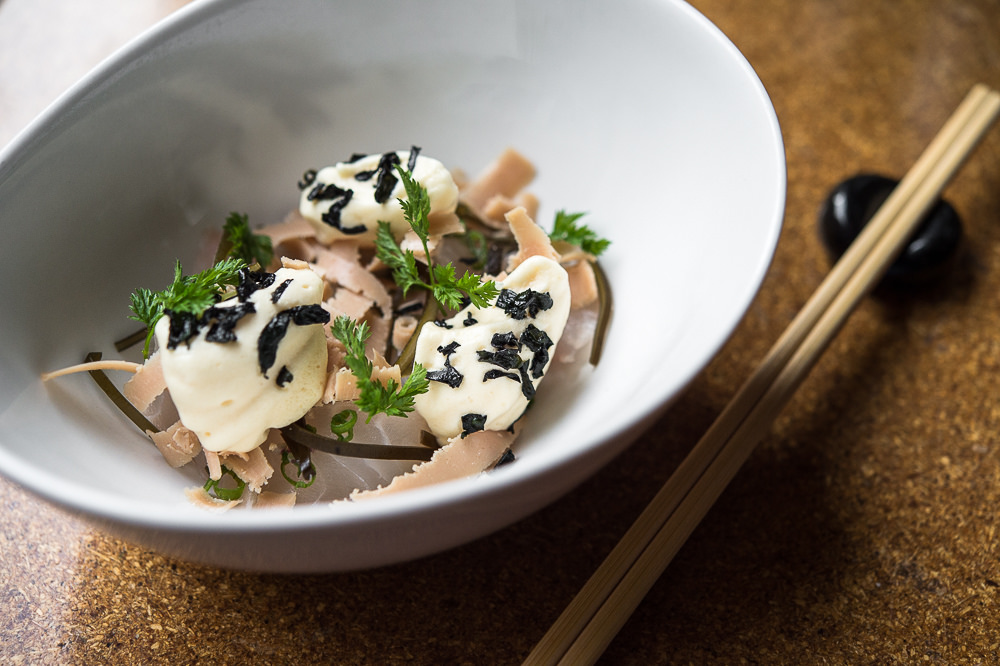 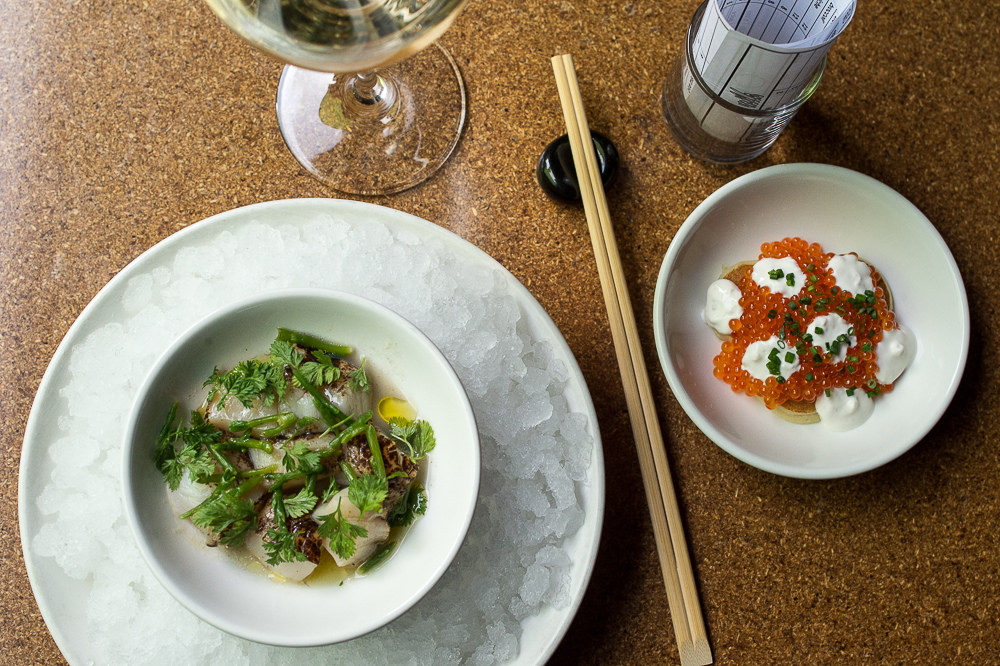 Like the way the raw bass looks? Order it. For some, trolley cart sashimi might not be far enough removed from conveyor belt sushi, so rest assured the flavors and temperatures didn't taste any less perfect than any à la minute crudo I've sampled at high-end Japanese spots. The clean, neutral fish acts as a springboard to show off pickled kombu and melty shavings of sweet foie gras. Gorgeous.

The trout roe is another BUY at $16. A generous heap of the firm, oily eggs sits atop potato blini. They pop in the mouth like bubble wrap. Fancier abodes take note: You'll make more money offering affordable red caviar like this as opposed to $95 sturgeon roe.

Má Pêche take note as well: Do we need to be serving the same forgettable shrimp cocktail as at any other Midtown joint, with the succulent heads removed from every crustacean? At least we know this before ordering thanks to the trolley carts. 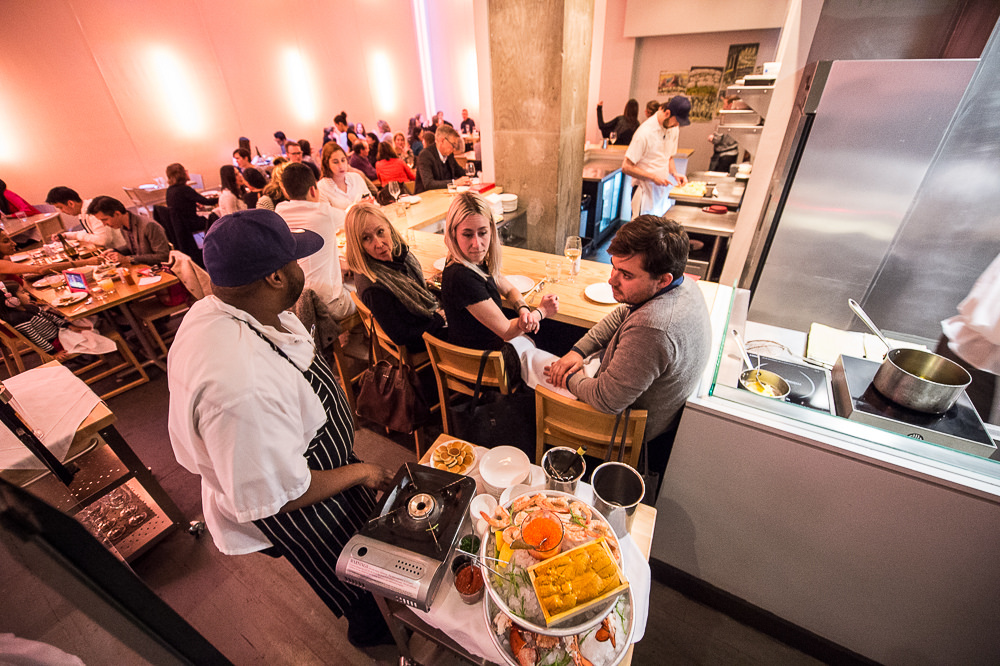 Be sure to check that rolled-up menu every now and then. The pushcarts once had deli-style price placards next to each item and now they don't because, well, this ain't no deli. Just about everything's under $30, though some items are unexpectedly pricey — half a cold lobster tail and a claw, brilliant with lemongrass butter, set me back $24. The lesson is this: It's a lot easier to spend your money when you're not precisely sure how much you're spending, which is why it's quite easy to dispense with $125-$150 per person after tax and tip at Má Pêche on any given night. 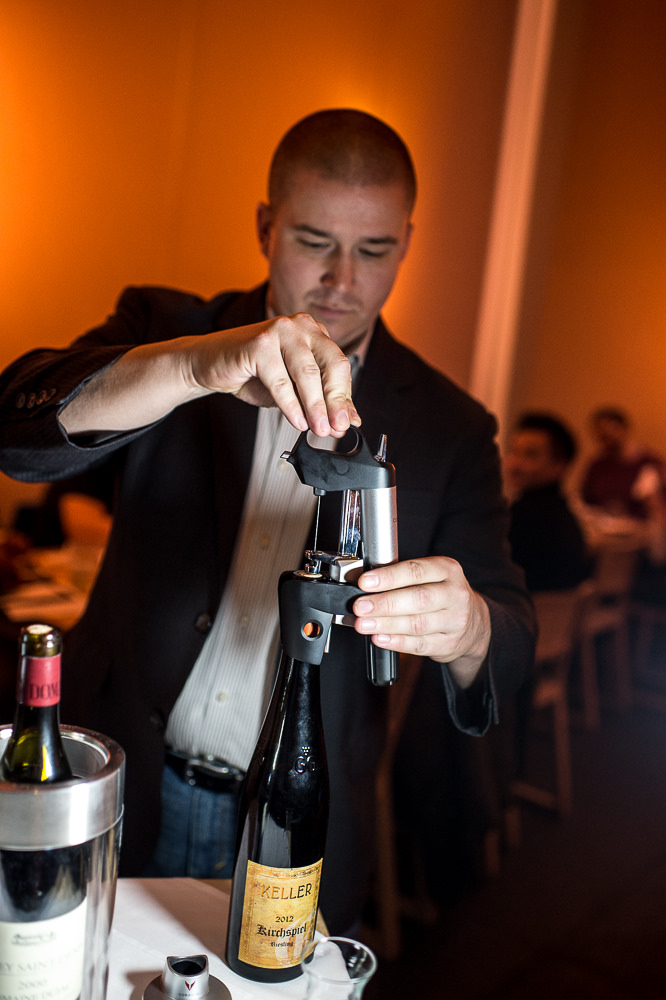 But kudos to Momofuku beverage director Jordan Salcito for keeping the wine list reasonable. She offers 56 by the bottle selections for $56, including a floral Alsatian gewurztraminer that will cut through the spicy fare like a sharp knife. And while sommeliers around town are using the new Coravin wine-preservation system to show off $100-$500 pours from bottles that can cost as much as a low-end Ducati, Salcito sells those pours at $22-$66. Mad respect.

Order vegetables. Kimchi radish stew has enough spice to cure a proper late spring cold. Broccoli with sunflower seeds boasts deep vegetal and nutty overtones thanks to miso and, more importantly, hozon, Chang's instant-umami product that has an uncanny ability to deliver a savory roundness in meatless dishes. No hozon in the vegan rice cakes, which blend tofu sauce, bean paste, sautéed greens, and Sichuan peppercorns for such a profound depth of flavor that you'd swear there was veal stock or MSG in there (there's neither). Outstanding.

Knock back a few fried shrimp balls when they come around; they sport that gentle metallic maritime tang that lets you know you're eating a Harvard-level crustacean. Order the dry-aged beef frankfurter if it's available. Carmichael calls it an ode to the Midtown dirty water dog, which is amusing because the sausage packs more dry-aged tang than tons of steaks in this part of the city. Just as good are lamb chops, roasted slow and sliced thin, with the rare meat as silky as its cotton-candy fat. It's meant for wrapping in lavash flatbread like a Middle Eastern taco. 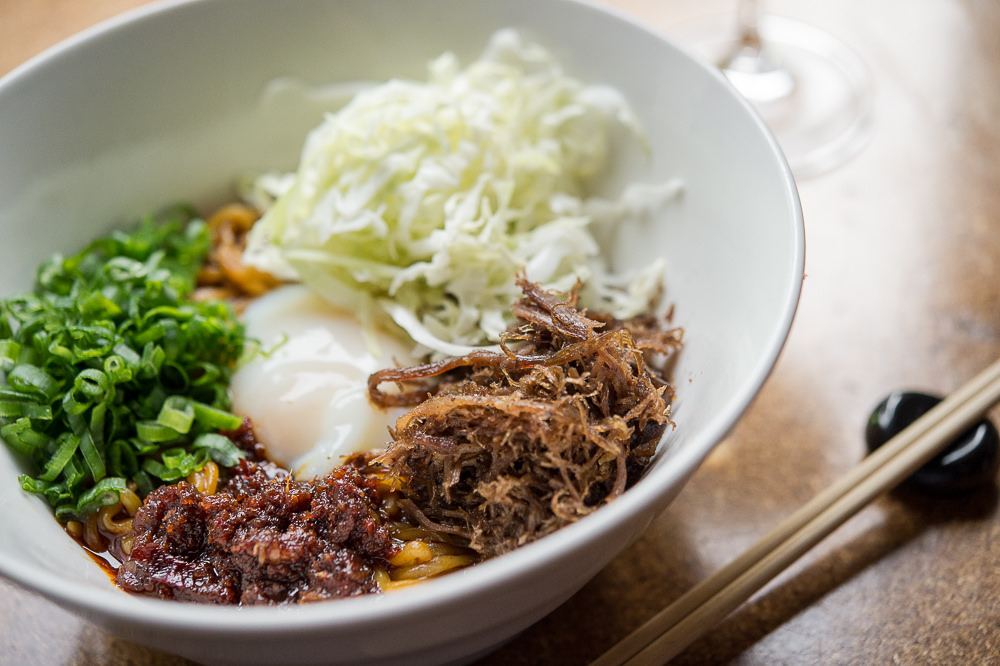 Cod fritters, a few bites of meaty bliss, stray from the pillowy Spanish standard; these mahogany balls are filled with spicy, toothsome meat. Carmichael tells me the recipe is from his grandmother who, like himself, is from Barbados. That's no small matter. For all those who rightly argue that there aren't enough women running kitchens — they make up just 20 percent of America's head chefs — it's worth remembering that there are even fewer cooks of African descent at the top, 13.7 percent nationwide, to be precise.

That means we need more folks like Carmichael. Who else is going to wean Midtowners onto fancy Caribbean-inflected fare? The chef brines chicken in habanero, seasons it with habanero paste, and adds habanero powder to the crust. But the heat is restrained. You experience the fruity, insanely delicious flavor of this chile without all the spicy pain. It's one of a few larger dishes available for actual "ordering" off a short, printed menu. Also on that list: a $50, deboned, hot-sauce-spiked fried porgy. You eat it with your hands and mop up all the remnants with West Indian fry bread. Do it. 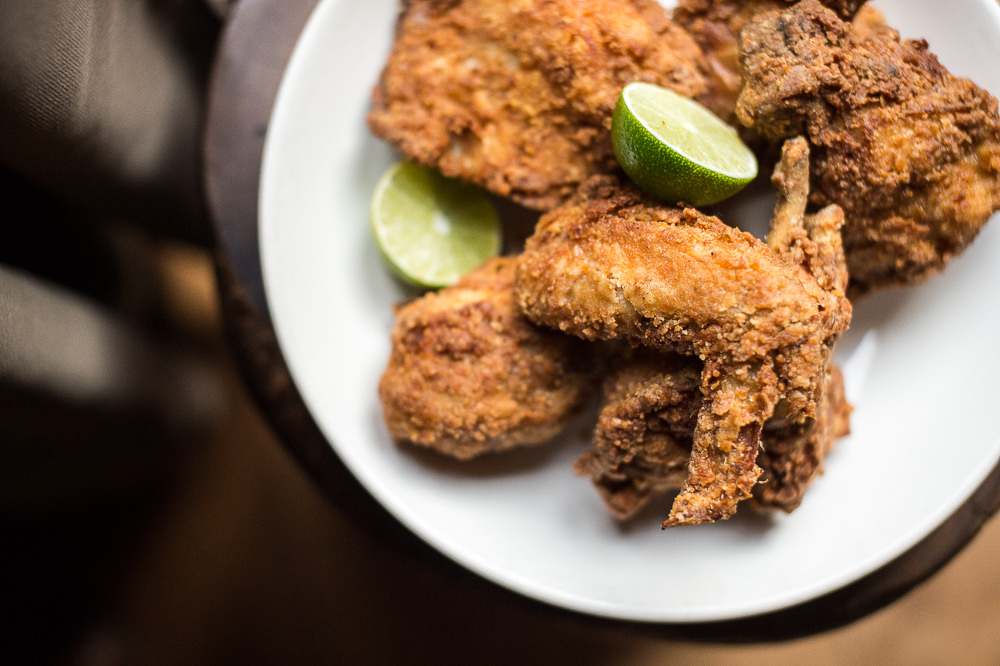 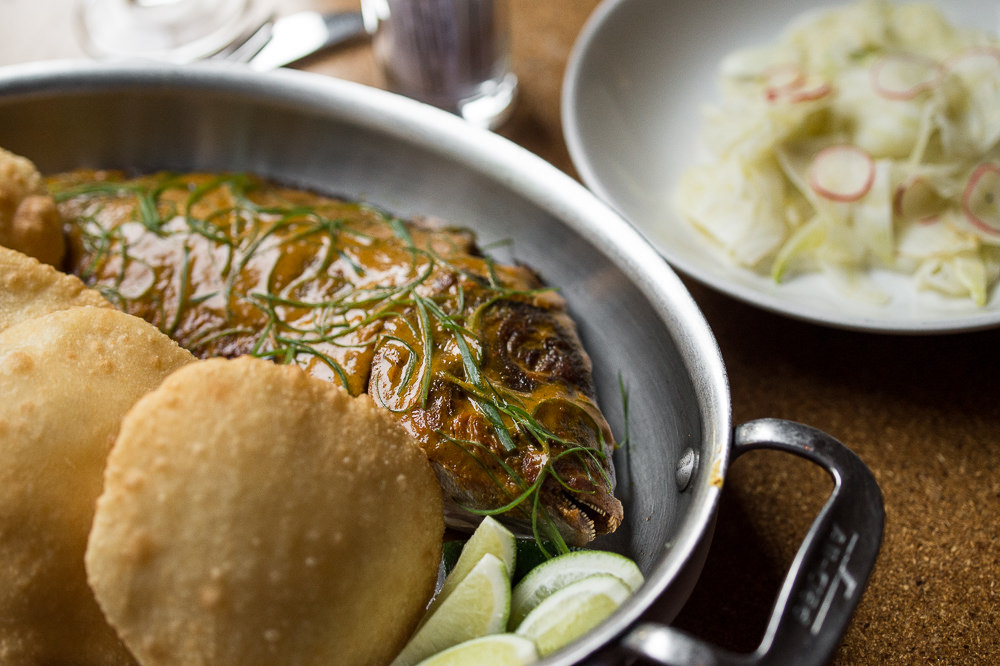 There are misses. Skip the bland lobster fried rice and ho-hum roasted cod. And for those who aren't tired of Chang's famous pork buns, Má Pêche peddles them for $5 apiece, or $10 with a shot of hot sake that helps numb your palate to how average this dish tastes a decade after it first wowed us. Carmichael tells me it's the restaurant's best-seller, which is too bad. It's also too bad that most of the dessert offerings are Milk Bar creations, making this part of Má Pêche feel more like a brand extension than an effort to do something genuinely creative. 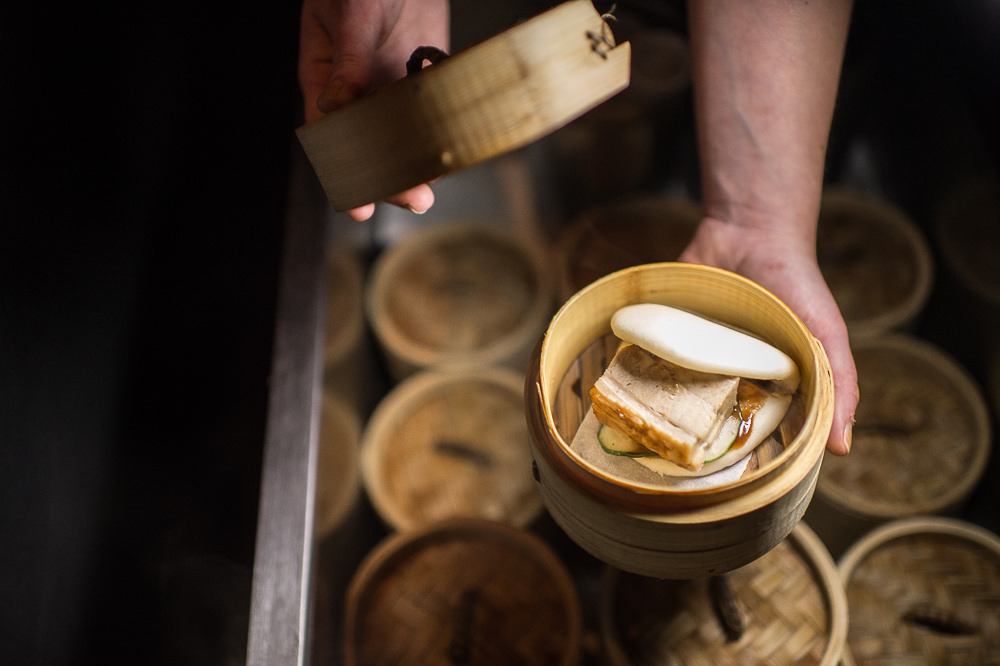 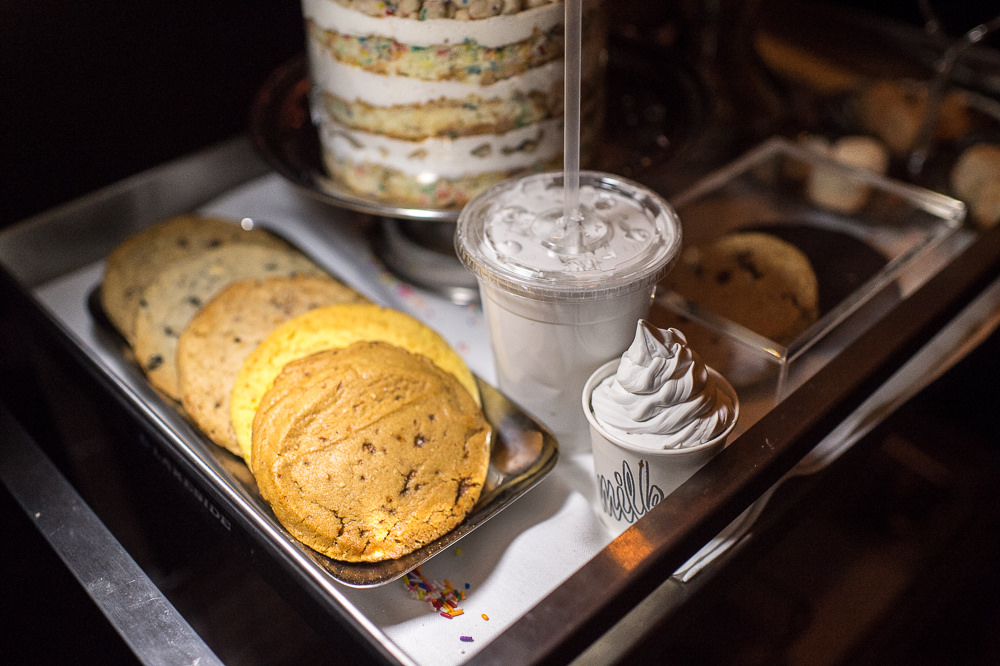 Still, Má Pêche is a risk-taker, something uncommon not just for Midtown but for a restaurant group the size of Momofuku. And let's hope we see these trolleys at other venues soon. Just as you shouldn't have to read the playbill to enjoy a Broadway show, you shouldn't have to divine what your food might look like from a menu printed in an 11-point font that's designed to be read under first-date make-out lighting. Can I get a hell yeah?

Our review of Má Pêche

Cost
You can order some fried chicken and beer and get out for about fifty bucks, but hungry folks doing the full dim sum experience with wine can expect to spend $125-$150 per person after tax and tip.
Sample dishes
Trout roe, black bass with foie, vegan rice cakes, radish kimchi stew, cauliflower with guacamole sauce, fried chicken, lamb chop, porgy for two. And I'm told there an ice cream cart in the works!
What to drink
Do the $56 bottles of wine or try an excellent classic cocktail.
Bonus tip
Make an online booking through CityEats. Remember that Má Pêche, unlike Ssam Bar or Noodle Bar, takes reservations for a la carte dining. Tell Carmichael to bring back the Ukrainian-inspired spaetzle with chicken gravy and shabu shabu, an insanely delicious special that one of his cooks offered a month ago.