Marc Murphy Looks Back on 10 Years of Landmarc

Share All sharing options for: Marc Murphy Looks Back on 10 Years of Landmarc

In the New York City restaurant industry, it's very hard to make it to the 10-year mark. Welcome to 10 Years In, wherein Eater meets with the restaurateurs that are celebrating this milestone to chat about the ups and downs of their decade in business. Up now: Marc Murphy. 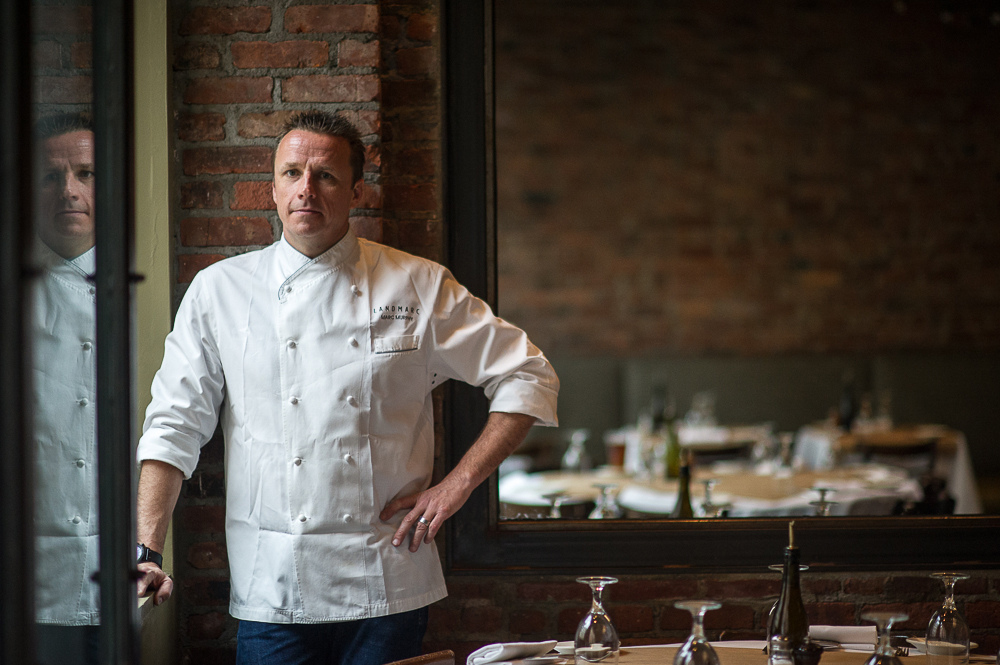 Marc Murphy loves creating neighborhood restaurants. These aren't the places that the foodie hordes flock to, and they're not establishments that the critics scrutinize too heavily. But they are restaurants that offer a little something for everyone at a reasonable price with good service all around. On the occasion of Landmarc Tribeca's tenth anniversary, Eater sat down with the chef to talk about how he started his small empire of neighborhood restaurants, and how he's kept the quality up over the years:

When you think about the opening of Landmarc Tribeca 10 years ago, what's the first thing that comes to mind?
My wife and I just got married. We went traveling for a while, we took a three month tour to get to know each other so to speak, and we came back and got married and had a kid. In the meantime, I thought, "My whole career, I've worked for other people, and here I go getting a job working seven days a week. Why don't we just do our own little thing?"

I want a place where I'll see my friends and make people happy, a lot, every day of the the week. I want a restaurant that's not a special occasion restaurant.

We bought this small building and rebuilt this place with a friend of mine. I had worked at high-end restaurants my whole life. I worked at Le Cirque, I was at La Fourchette, I was at Monte Carlo with Ducasse, and I was a chef on top of the World Trade Center at Cellar in the Sky. I wanted to know how to do it right and then I could manipulate it how I wanted. I knew when I worked at a three-star Michelin restaurant, in Monte Carlo, I was like, "I'm never going to have a restaurant like this. I want a place where I'll see my friends and make people happy, a lot, every day of the the week. I want a restaurant that's not a special occasion restaurant. I want a restaurant where people can come and eat here three days a week."

Is there anything you would have done differently?
Honestly, the only thing that I would've liked to have had is a back door entrance to be able to bring the deliveries in so I could be open for breakfast. You can't get the deliveries in while breakfast is going on.

Did you ever think when you opened this restaurant that in two years or three years you could turn it into something so big and do another one?
When we started this place it was me, a friend of mine, and a couple of cooks downstairs. We thought, "It's a small place. We've got about a hundred seats. Maybe we'll do about a hundred, hundred-and-ten covers a night. It'll be nice and fun." Then it turned into us doing 300 or 350 covers a night. It was crazy busy. It was really fun. We were really happy about it. You think, "It's the beginning." But it kept going and going and going. It was just great, and we found this great place in the West Village. We thought, "Let's open this little place called Ditch Plains where we can have oysters and beer whenever we want," and we did that.

The impetus to doing these things is that you open a restaurant like this, and you get great staff — you have great people working for you. But at a certain point, there's nowhere for them to go. They want to keep going and grow in their career and I want them to come with me. It was sort of the natural extension of going off and doing something else. I mean, the guy who is the bartender at Ditch Plains was one of our first hires here at Landmarc Tribeca. 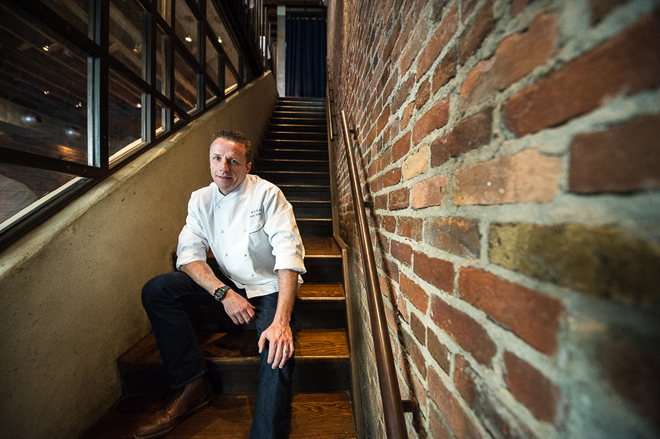 [Daniel Krieger]
Over the years, a lot of critics and food writers have described your restaurants as neighborhood places, even the one in the Time Warner Center.
That's my main goal.

I want this place to succeed and I want it to be successful for many, many years. And the only way you're going to do that is with the local, regular people coming in two or three times a week.

Did you ever feel like you didn't want to be put in a certain...peg hole?
That's the peg hole I want. I feel as though when I did other restaurants and other places where, when the review comes out, everybody's sitting at the restaurant with the review and they're saying, "Ruth Reichl says to eat the chicken." So they all order the chicken. Everyone in the restaurant eats the chicken, but they come from over there and over here. I didn't want that.

We bought the building, so we're going to be here for a long time. I want this place to succeed and I want it to be successful for many, many years. And the only way you're going to do that is with the local, regular people coming in two or three times a week. I need Bob and Joe living down the street to be here three times a week. It's the same concept with Kingside. I mean Kingside is a nice Midtown restaurant, but you know what? The first couple of months being there we met the people that live across the street and the people that are in for brunch and the people who work down the hall or up above you. Those are the people that I want every day. To me, the most interesting people are the people who are in here all the time. They get to know me and they get to know my staff. We've seen kids grow up in this neighborhood from the families that have been coming in.

10 years down the road, what are some of the creative challenges of running this first restaurant? Do you want to keep adding new stuff, or do keep doing the same stuff and just keep doing it at a really high level? Or is it a mix of the two?
People feel like they have to reinvent themselves, but if you go to Paris, you can walk into a restaurant that's been there for 100 years and they're doing the same thing. I mean, actually, we were just in Florida — Joe's Stone Crab, it's been there 100 years. They're not doing anything differently. All they do is buy dishes when they break, and that's about it. They probably replace the stoves every once in a while. They're cooking the same damn good food. What I love about this menu at Landmarc, which is the way that it's always been, is that about 75 percent of it stays the same — well, no, about 60 percent of it stays the same and 20 percent of it rotates through the seasons. For example, take the lamb shank. If I didn't put the lamb shank back on next winter, I'd probably have a revolution because people come here for that lamb shank in the winter and they want the lamb sandwich that comes from that lamb shank.

There are certain things that are key to a neighborhood restaurant. If you live two blocks from here, you know you can come here and you don't even have to open the menu. You can say, "I want the French onion soup and I want the boudin noir," and by God we better make that thing exactly the same every time so it tastes the right way. The vinaigrettes have to be the same. It's about consistency for the neighborhood restaurant.

Do you see this as the flagship restaurant in your group? Do you think that part of its DNA is in Kingside and Ditch Plains, or do you see them as distinctly different entities?
They're a little different but they all have the same soul, the neighborhood aspect. The same soul is how we treat our staff and how we work with our staff. I think it's very important. I think that directly correlates to how the customers get treated, and that's something I concentrate very much on. As I say to any of my managers, we're hiring nice people and we can teach them how to wait tables or work in the kitchen. 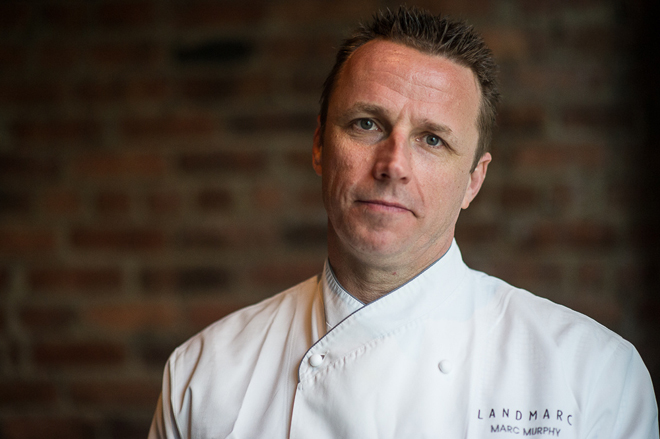 [Daniel Krieger]
Is a lot of your clientele made up of people that have been coming here for years, or do you still get a lot of new customers?
What's interesting to me is to see the people that have grown up in this neighborhood or used to live in this neighborhood, but now they've moved and are customers at Ditch Plains or Landmarc uptown. They'll always come back and visit — it's the whole reminiscent thing. So yes, there are certain families that come and go but they always seem to come back, which is great. There are new faces, too. But today I was at Time Warner...there's a guy that's at the bar every day at lunch from from 11 o'clock to 12:30. He's been there since the day we opened, and it's great to see him.

Obviously, a lot of people know you from TV. After having a few years of experience like that, do you feel like there's a different sort of pressure for your restaurants to perform or deliver?
I think we just strive to do the best we can every day. We get up and do the best job that we can. TV or no TV, whatever it is, those are separate businesses in a sense. We've always strived to do the best we can every day. Sometimes we do fail. There are times where things don't always go right. We try to do better. I have about 550 employees, and if I had every one of my 550 employees doing everything exactly the way they were supposed to, I think we'd be living on a different planet. I'm not sure that's actually going to be reality. I was actually with Mario Batali last night and he was like, "Isn't it great when people complain about stuff sometimes?" It's like...what are you gonna do? Sometimes things go wrong!

Does it feel like it's been a decade?
Not really. It's pretty amazing. It does feel like a flash. It's a good flash. You come here and the memories are great.

· All Coverage of Marc Murphy [~ENY~]