Share All sharing options for: Artisanal-Everything Roberta's Defies the Stereotypes

Artisanal everything has become somewhat of a Brooklyn stereotype, the stuff of gentle mockery in Simon Rich stories and episodes of HBO's Girls. I no longer ask if the Kool-Aid is locally-powdered and house-diluted when dining out, because I know it is and that the waitstaff is drinking gallons of it. So it's with a certain skepticism that I encountered the house-made duck prosciutto at Roberta's. And then I tried it. It's good — very good.

Actually, strike that. Not since Dr. Seuss unveiled Green Eggs and Ham half a century ago has there been such a compelling expression of American charcuterie. I'll go even further, Sutton-I-Am. Roberta's duck ham is one of the world's great luxury goods. It has more depth of flavor than Italy's famed Prosciutto di Parma and it's the closest thing we have to Spain's Jamon Iberico de Bellota, an appetizer that can fetch $36 or more elsewhere.

Roberta's asks just $13 for this paper-thin product. Each slice is two-thirds flesh, one-third fat, and it looks like what would happen if you flattened a candy cane with a rolling pin. The white cap melts like ice cream in the mouth while the lean meat sports a mineral tang as complex as Minetta's Tavern's strip steak. Chew, then inhale. This is the musky bouquet of game. This is the perfume of a chophouse. This is the terroir of New York. 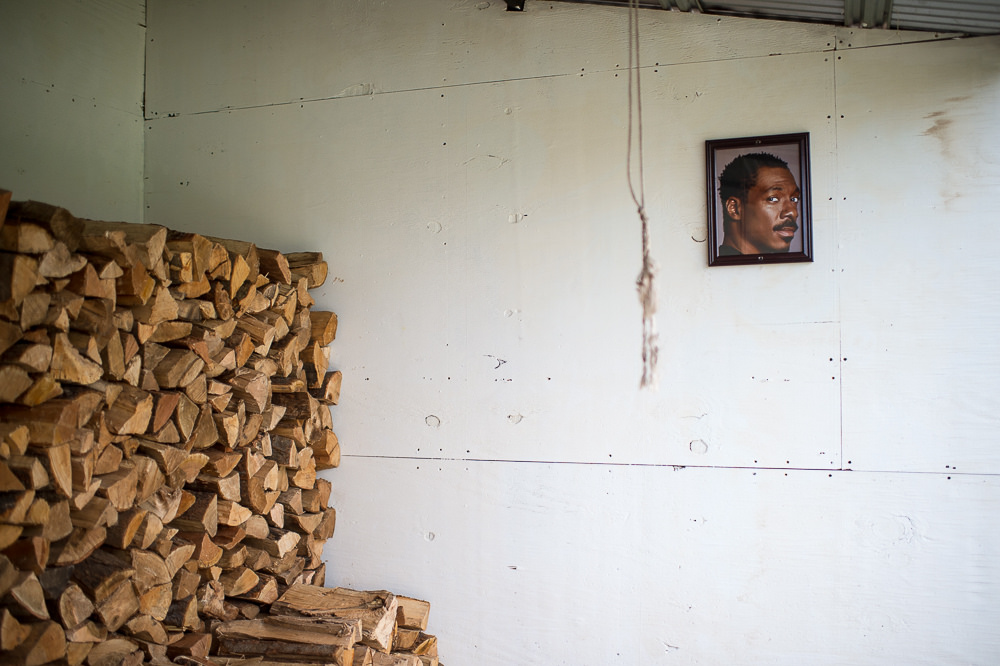 Roberta's is six years old; I've been eating my way through the menu for about half that time. And over the past year this underdog has steadily been transforming itself from a very good Italian-American joint and pizza parlor into one of New York's most quintessential kitchens.

It's a place I send out-of-towners because the vegetables are as refined as at a high-end French spot, and because the $13 pastrami sandwich is better (and $3 cheaper) than Katz's. The trick is a light smoke (so it doesn't taste like barbecue), a gentle cure (so you can actually tell that it's beef), a subdued peppering (this is New York not Sichuan Province), and a thick cut (to prove how tender the pastrami really is).

Put that on marble rye and there's your lunch for two days straight.

Such carnivorous jiu-jitsu occurs under the supervision of chef Carlo Mirarchi. He rides a fixed gear bike to work (of course). He wears a mustache (why not?).
He runs sister spot Blanca next door, a 25-course, $700-for-two tasting menu spot with a Michelin star (no Groupons accepted).

At Roberta's, by contrast, virtually every dish is under $20. In an era when the prices at stripped-down, budget-gourmet restaurants sometimes approach those at gussied up fine dining joints, Roberta's deserves credit for keeping things reasonable. The margherita pizza tastes like it should — a tightrope balance of tangy tomatoes, mozzarella, and basil. But here, at $12, it boasts one of the city's lowest prices. Just keep in mind that Roberta's isn't quite Daniel. 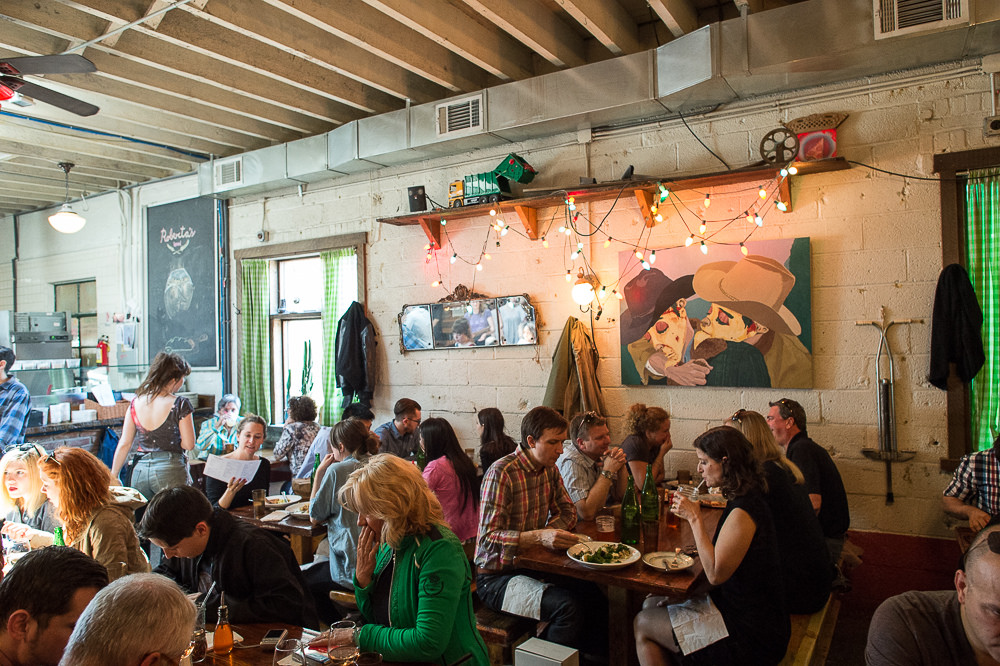 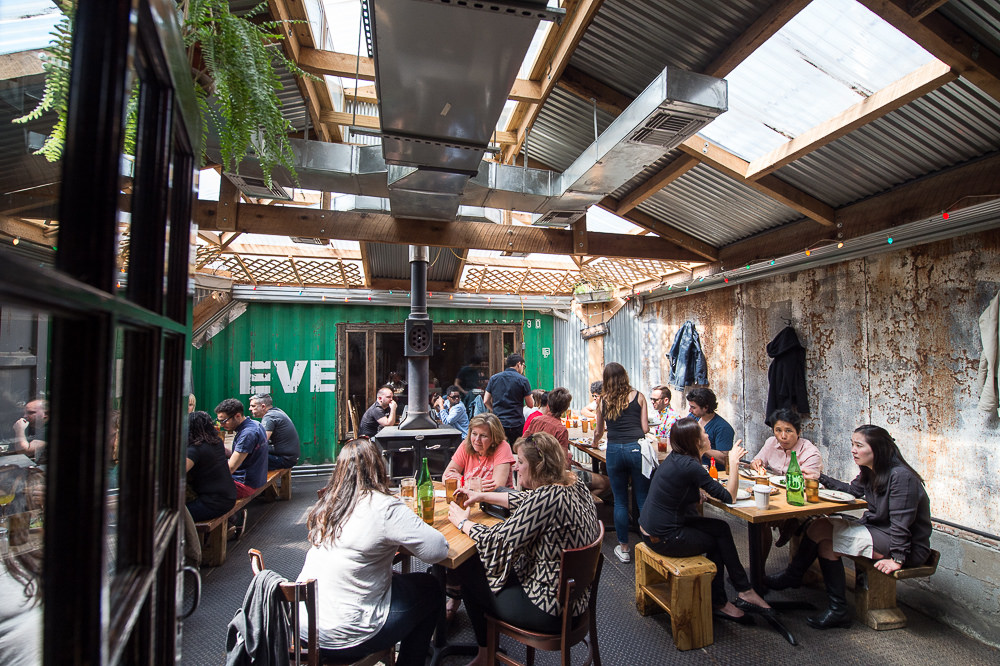 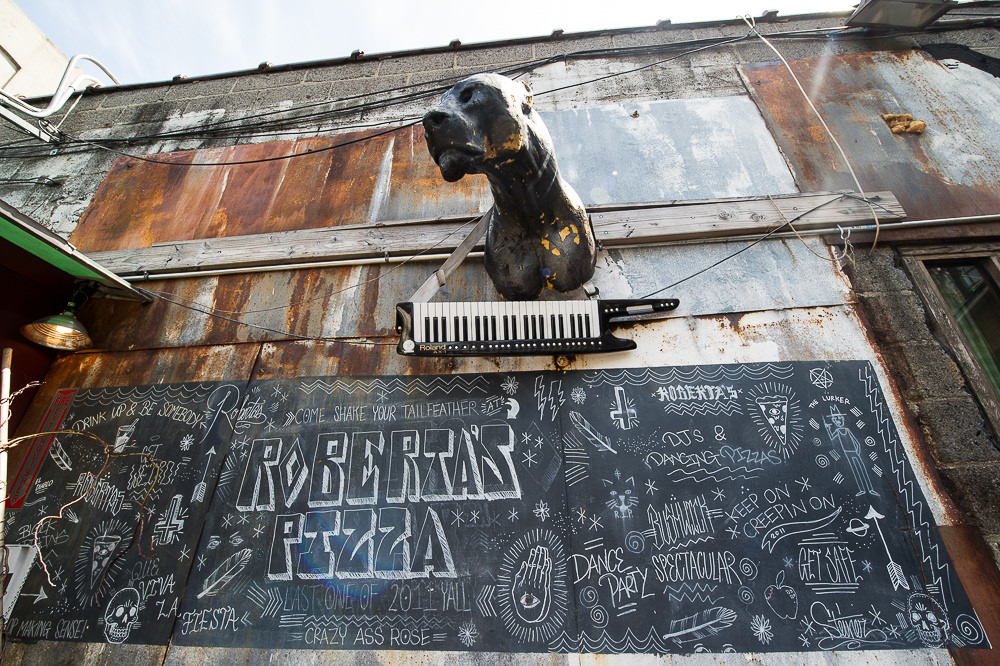 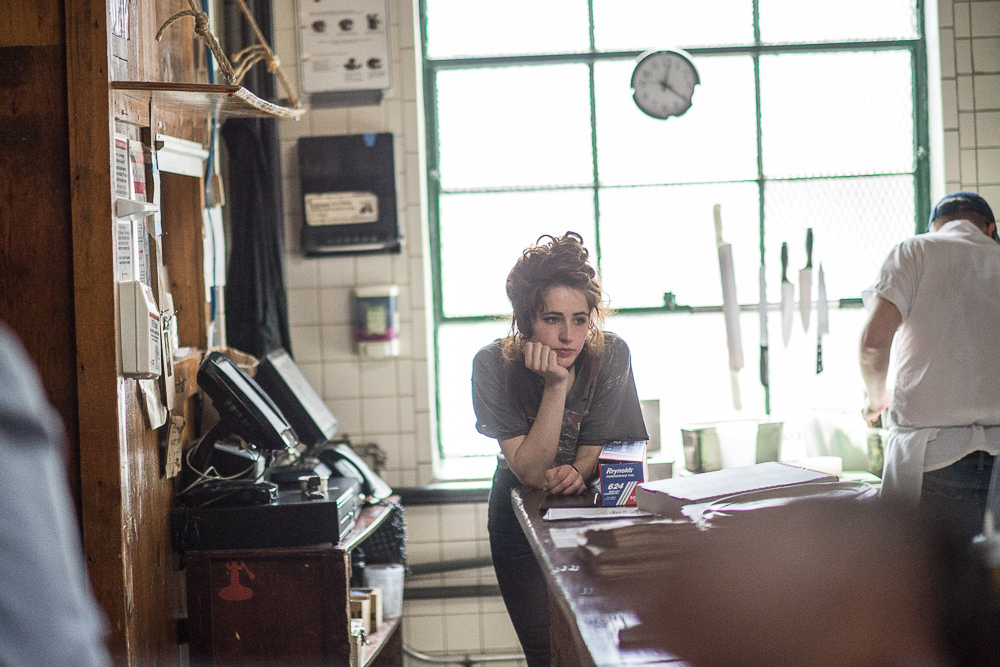 Walk inside and you'll encounter a drawing of a woman's barely-covered posterior ("nice buns"), Mexican Christmas lights, a fire-breathing pizza oven, and an ode to the amorous cowboys in "Brokeback Mountain," painted in "pizza face."

There's also a rooftop garden, a pastry case, a bathroom mirror with so many stickers it's no longer a mirror, a defaced Dyson hand dryer, a sound system playing Metallica's "Master of Puppets," an outdoor tiki bar that's light on tiki cocktails, communal benches without backs, bar stools with backs, wine glasses with proper stems (you thought they'd use tumblers?), skinny men drinking fat tallboys (Negro Modelo), a fully functioning radio studio inside a shipping container (long story), a kitchen that's smaller than your studio apartment, bartenders who know to check your ID if you're ordering $4 cans of Bud, and a television showing the big game. Should God or Guy Fieri ever decide to rid our world of life and taste with a tsunami of burning taco grease, Roberta's would make a heck of an arc.

The bad news is that not everyone can fit on this hip Bushwick ship. 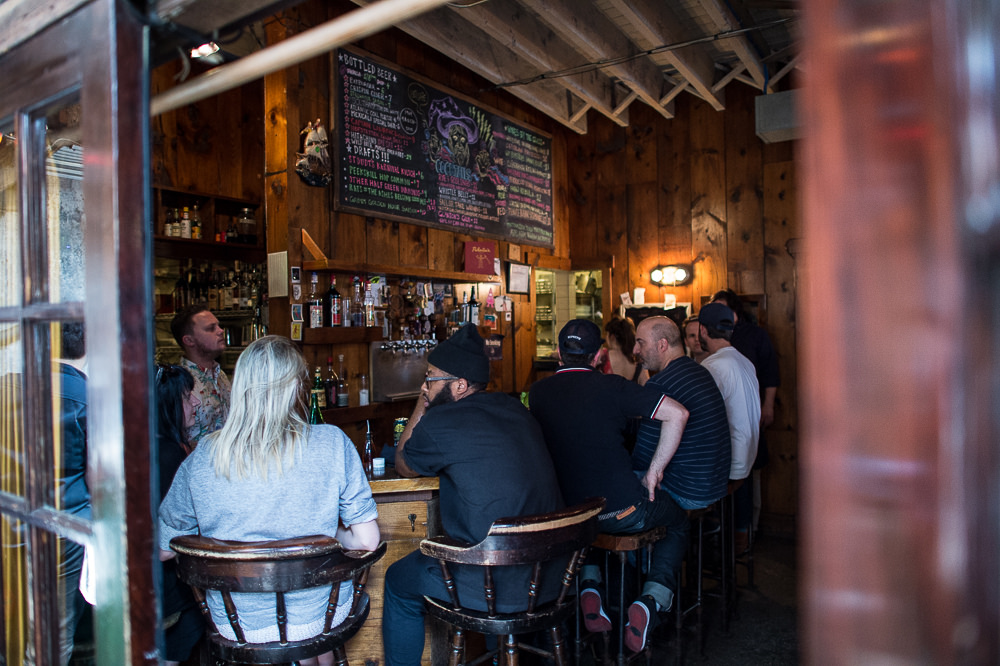 Waits can stretch well past two hours on the weekend, though lucky diners might be able to shave an hour or more off that queue by jonesing for seats at the bar. That's where you'll find me and my crew on a Saturday, knocking back some Kolsch Lager ($6), watching the Yankees beat up on the Sox, and checking out the squid situation. Rest assured, the situation is strong. Mirarchi grills his calamari, the firm tofu of the sea, and uses it as a neutral whiteboard for a Meyer lemon sauce that's more perfume and pepper than acid. Right on.

Is Roberta's serving tartare as a special? Order it. The kitchen dices up aged Wagyu and gently heats the meat to bring out its sexy locker room funk. No capers or mustard get in the way, just sweet meat with a firm black pepper bite. Fold up the meat into a nasturtium leaf and there's your Korean-lettuce wrap, Brooklyn style. 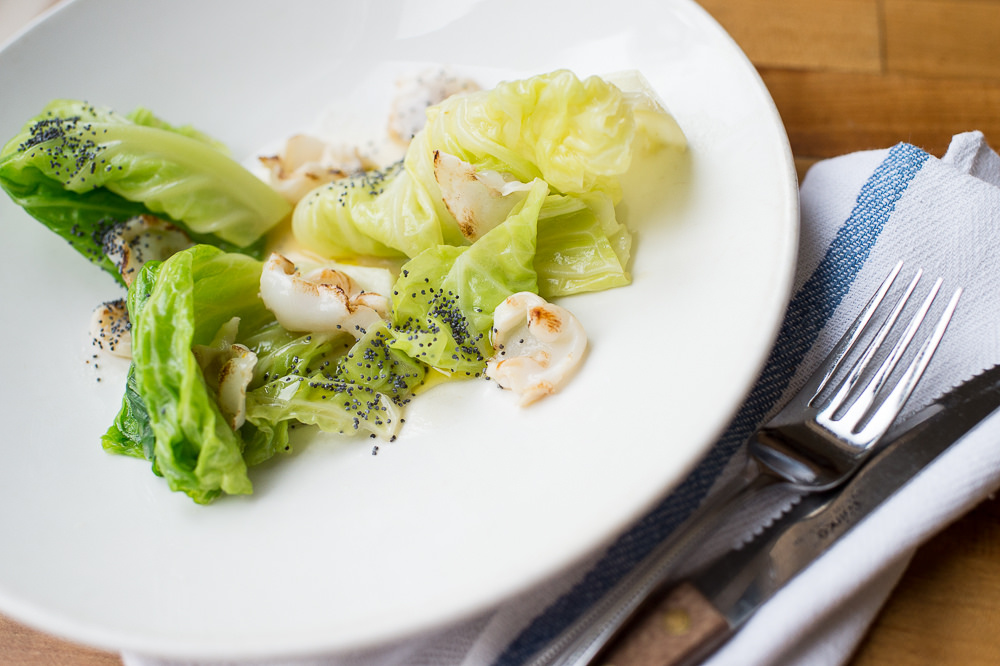 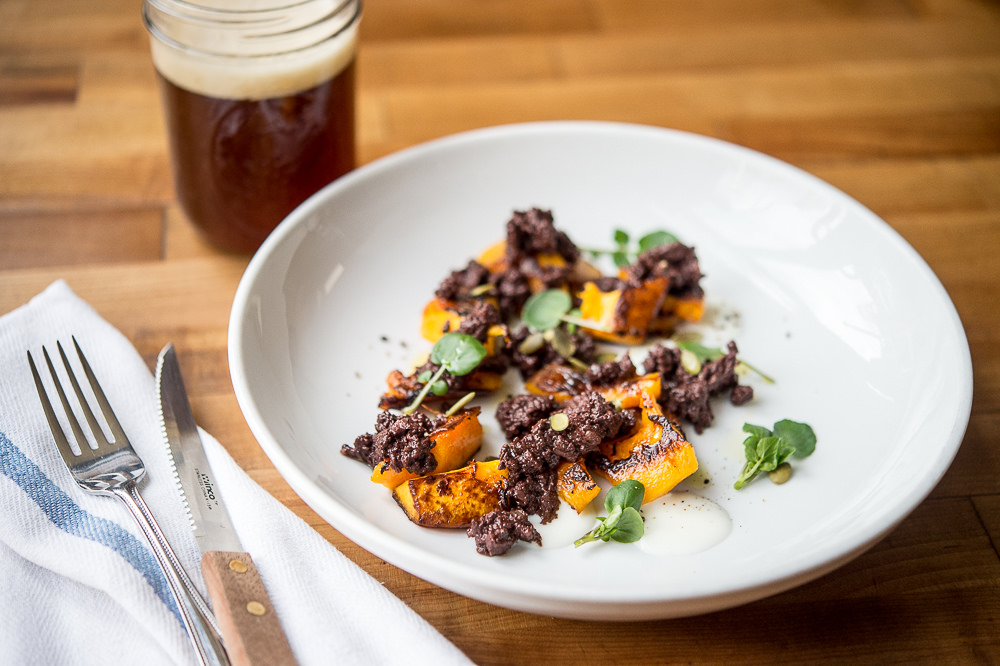 More so than in years past, protein-light dishes can make up three quarters of the starters on any given night. And on those nights you'll eat very well. Little bits of octopus dot a larger plate of cabbage like maritime orecchiette, imparting some umami roundness to the leaves.

Torchetti with garlic, clams, and parsley serves as the backdrop for one of the city's best bivalve pasta dishes.

Blood sausage is crumbled on top of pumpkin that's as soft as soufflé, adding a restrained sweetness to the vegetal squash. And grilled mussels provide a savory backbone to a pile of roasted carrots with carrot puree and lime, a dish so indulgent (yet balanced) you could pour it into a pie crust and call it dessert. Perhaps this is the influence of Nick Barker, the chef de cuisine who cut his teeth at Manresa in Los Gatos, California, where this style of "vegetables seasoned with meat" is a way of life.

Pastas are nimble mid-courses. Toasted-flour spaghetti with fiore sardo cheese and black olives tastes like what would happen if you served Japanese soba in Italy, which is to say something brilliant. Agnolloti, meanwhile, are stuffed with something unexpected — blu di bufala, little bombs of funk and acid. And torchetti with garlic, clams, and parsley serves as the backdrop for one of the city's best bivalve pasta dishes (Esca and The Elm are up there too). 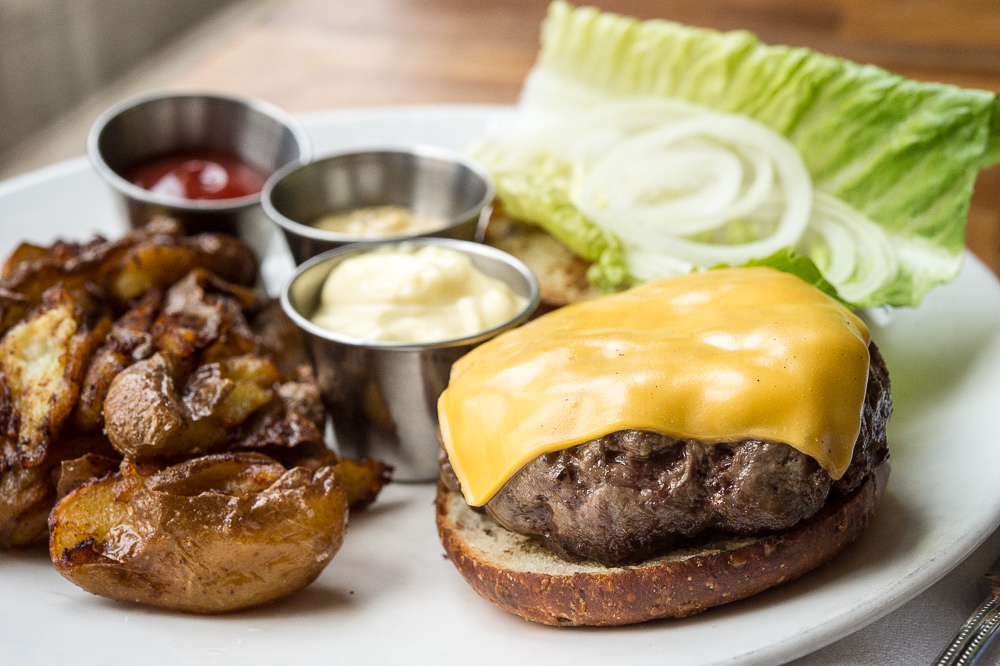 The lunch-only burger packs more flavors than most steaks around town.

Pigtail lasagna is not a mid-course — it's a $16 calorie assault that feeds three. Imagine the flavors of a regular lasagna, replaced by ricotta as rich as pot de crème and a chewy, gelatinous bolognese. It's an outstanding creation occasionally offered as a lunch special. The burger is a midday-only item as well, which is too bad because it packs more flavor than most steaks around town. 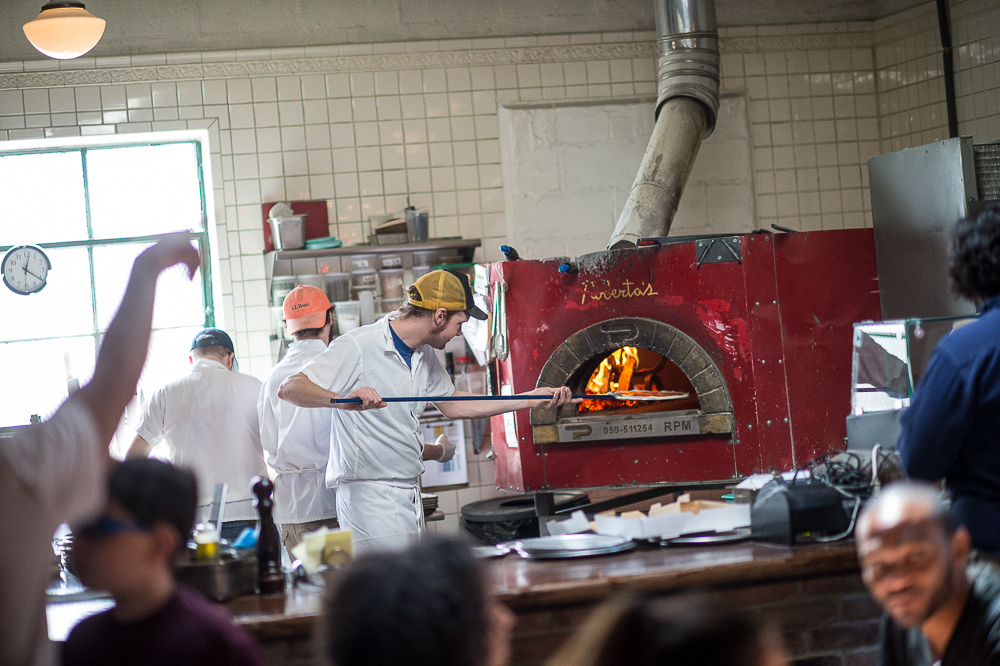 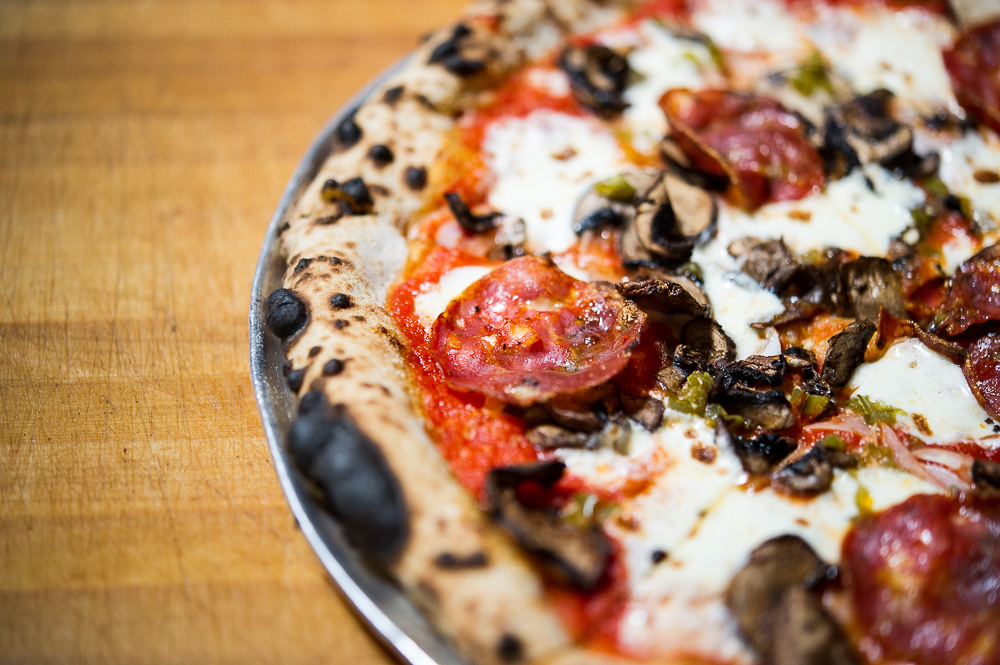 Mirarchi says that it's increasingly rare for guests to come in and order only pizza, but pies account for about 60 percent of the Roberta's food orders by volume. There's a good reason for that: the pizza is a stunning New York-Neapolitan hybrid, without that soupy center beloved by Italians and a handful of my Antonin Scalia pizza-originalist friends. To achieve this, chef Lauren Calhoun partially drains her mozz, uses a thinner crust than others, and goes easy on the olive oil. The result is a pie with very little droopiness or crust tip.

Entrees can trend weak at times — a softer than usual skate here, a forgettable flank steak there. But they're never enough to detract from the greatness of the meal. And smart guests will order the large-format steak whenever it's offered, as it's proof that American Wagyu can hold its own against the Australian stuff. The pan-roasted, Imperial-brand strip is charred brown on the outside and as red as tuna within. It cuts with the tenderness of a filet and and exudes more funk than a George Clinton concert. And unlike lesser cuts, the sweet livery musk continues throughout the chew, rather than disappearing after the first bite. It's one of our country's great steaks, and at $160, it better be. 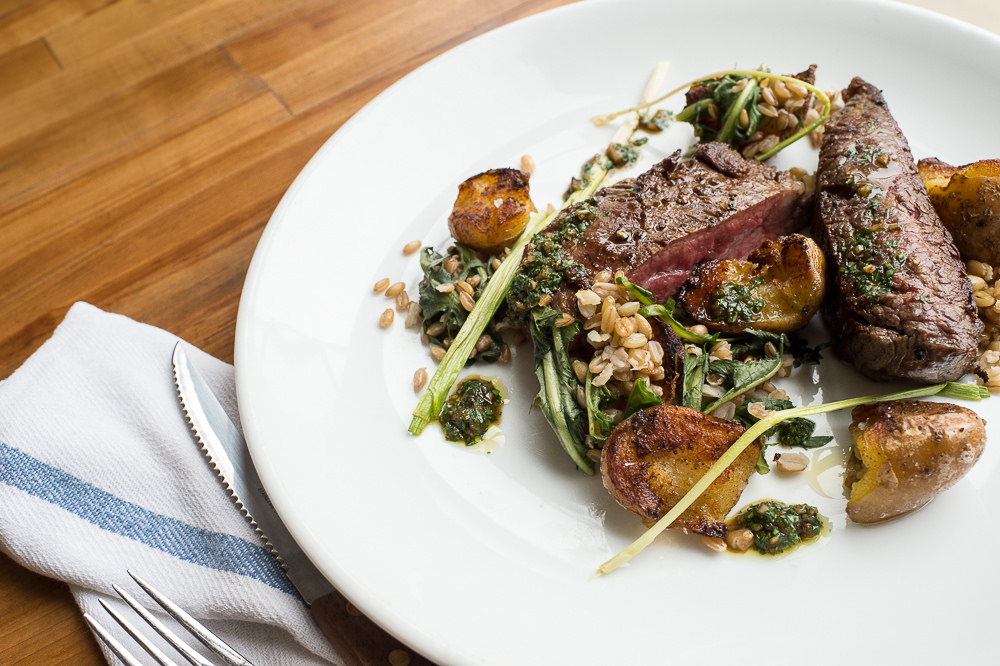 Samantha Short's desserts, like the rest of the menu, both sate the palate while challenging it. There are soft almond tarts with yuzu sorbet (like crack profiteroles) and knobs of chocolate cake with kaffir lime ice cream. They are serious creations, and Roberta's should give them more recognition by putting the sweets menu online like everything else.

Roberta's, like a 24-hour New York diner, tries to be the affordable jack of all trades.

Pastas, steaks, salads, vegetables, sandwiches, pizzas, and pastries: Roberta's, like a 24-hour New York diner, tries to be the affordable jack of all trades. And it succeeds. So finish off with a shot of Montenegro amaro and make room for the next guy. He's been waiting a while.

Our review of Roberta's

Cost
Pizzas and pastas at $17 or less; charcuterie and starters at $16 or less. Entrees at $21-$28. The Wagyu strip, which can easily feed three, usually runs $160.
Sample dishes
Duck ham, squid, carrots, torchetti, Wagyu strip, chocolate cake with kaffir lime ice cream.
What to drink
Beer. Kolsch or try the Hitachno Dai Dai IPA for something off the beaten track. Wines by the glass are all $13 or under. The Guy Bussiere sparkling rose, at the top of that range, will get the job done throughout the meal.
Bonus tip
No reservations, so come early, come late, or be prepared to wait. Roberta's pizzas, like all pizzas, taste better when they've had ample time to rest (10-30 minutes). That means take it home.