Review and information for Mapo BBQ

When I first visited Mapo Korean B.B.Q. last winter, Murray Hill, Queens was like something out of a Robert Frost poem: a tree-lined village green heaped with fresh snow, with a railroad platform at its center, an ancient church or two on the edges, and streets bearing small storefronts circling the green like sleepwalkers on that cold and blustery evening. The town was carved from a tree nursery owned by one M.A. Murray around 1890, but nowadays, most of the land is occupied by trim stuccoed houses and brick apartment buildings, while the balance is mainly small cafes, brightly decorated with colorful signs broadcasting their specialties. In fact, outside of Manhattan's 32nd Street, no place in the five boroughs has a better collection of Korean restaurants.

Focusing on tabletop barbecue, Mapo occupies a prime corner overlooking the green, where, with springtime upon us, yellow daffodils rise in random clumps. The windows are plastered with banners of bright red meat calculated to set the salivary glands flowing. Inside, there's room for around 50 diners at 10 or so brightly lit tables. Here and there, broad-flanked Black Angus cattle pose in pastures like magazine pin-ups, as if too aware of their intrinsic attractiveness. From a raised platform a manager surveys the room, monitoring the comings and goings of employees dashing around the room like cowpokes, setting up and breaking down barbecues, distributing bottles of beer and platters of raw meat, busing tables, and forestalling groups of diners waiting hungrily in a knot just inside the door. 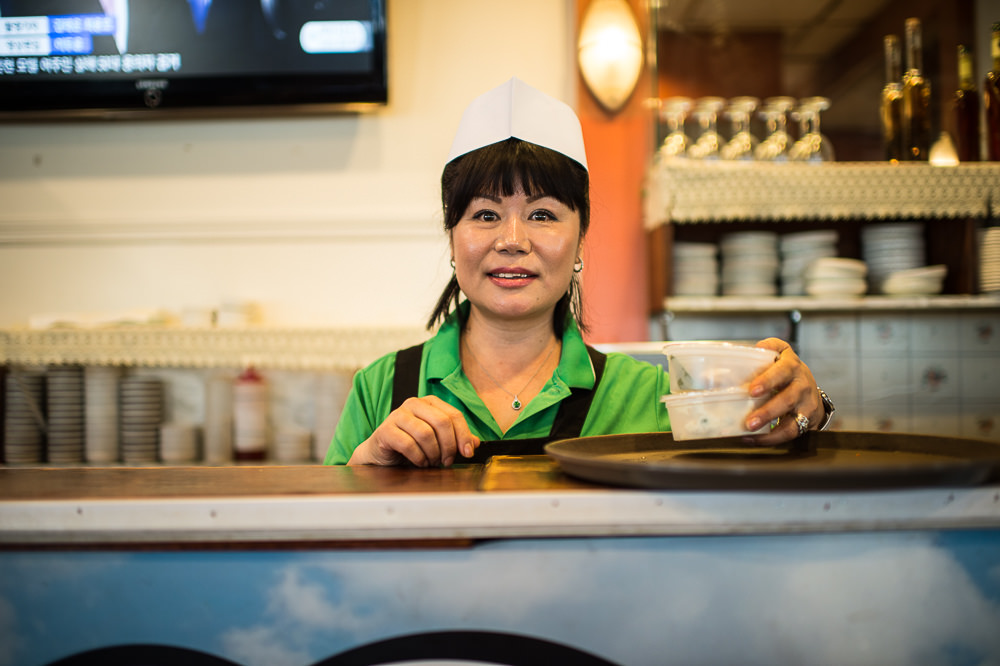 But why should you venture to this quaint but rather obscure spot rather than going to any other Korean barbecue in town? Two reasons: the place cooks its meat over lump charcoal, imbuing it with smoky savor. And rather than serving flesh in small, unsatisfying portions, as they do it in Manhattan, Mapo delivers saddlebag-size hanks deeply veined with fat, which renders and sizzles as it hits the grill. Here's how a meal goes down. 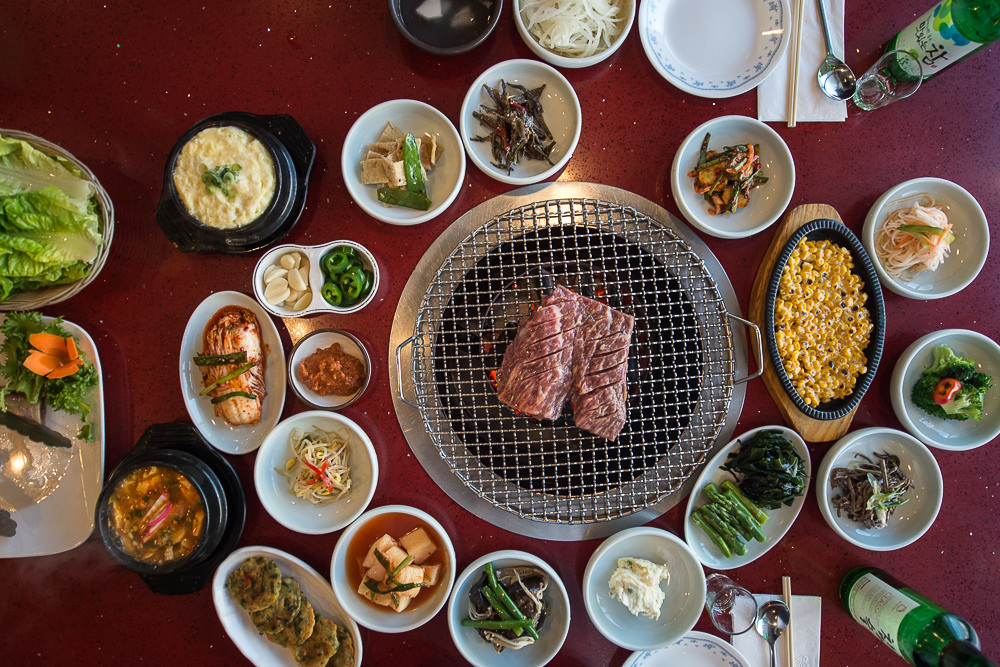 Though Mapo is a full service restaurant, there's no doubt barbecue is its raison d'être. Unlike the 32nd Street barbecues, which offer perhaps a score of grillable choices, Mapo provides only four, and selecting which to get is the most important decision. Top of the line is marinated kalbi, which is fatty beef rib stripped from the bone and soaked in a solution of soy and Asian pear, tenderizing the beef and imparting a slightly sweet and salty taste. For Texans and other barbecue purists, there's an unmarinated version available.

Pork belly is a compulsory offering for any Korean barbecue joint, thick slices of unsmoked bacon that's mainly fat. Tragically, this cut cannot be cooked directly over the charcoal because it would burst into flame like an improvised explosive device and send diners scurrying from the restaurant. Accordingly, the belly is seared on a domed contraption placed over the grill that prevents it from absorbing much smoke. It's great anyway. The fourth and last choice is also piggy: fat-rimmed ribs that look like boneless pork chops, which cook up nice and smoky directly over the flame.

Portions of kalbi are priced at $34.95, with the pork belly and pork ribs a few dollars less. The tables are set up for four or more diners (never go alone to a place like this), and one can easily order one less portion than the number of diners. It still sounds expensive, right? Wrong! With every allotment of barbecue comes a panoply of accompanying dishes, plus unlimited rice. 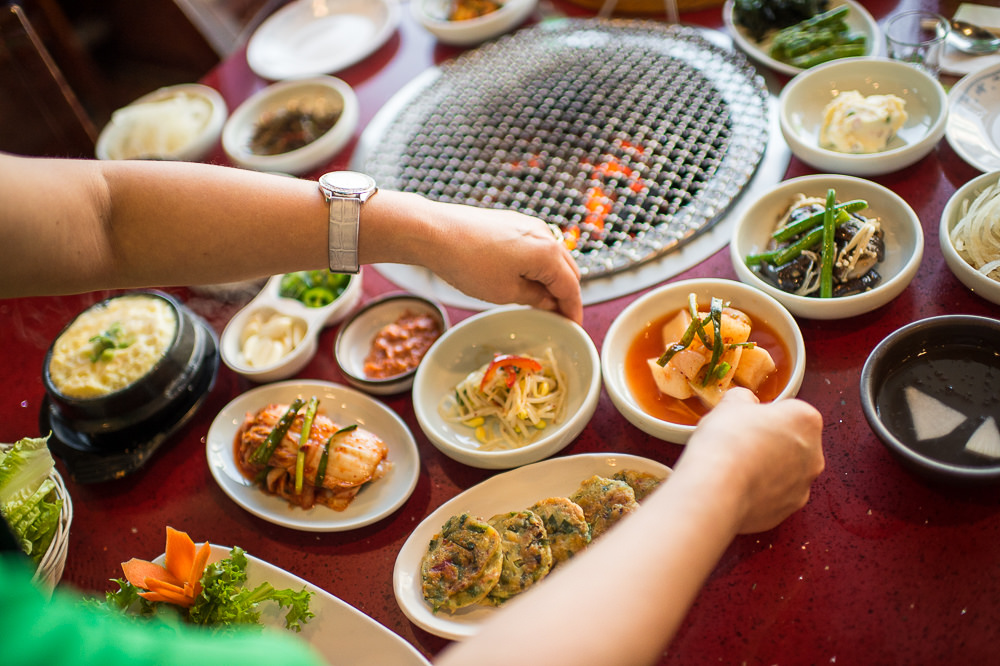 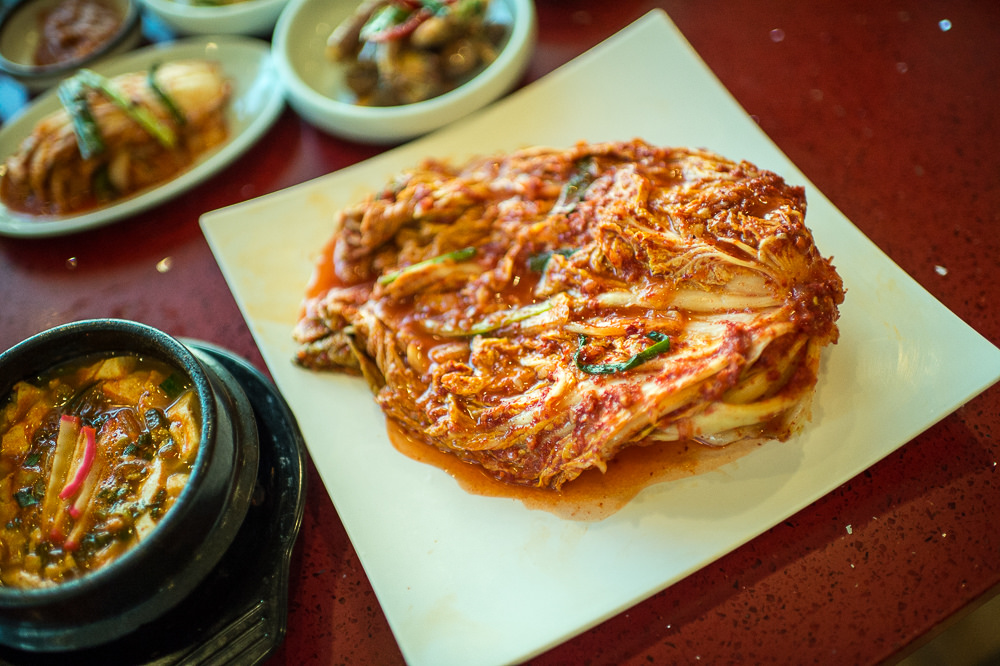 First to hit the table like a flock of birds settling on a field of grain are the banchan – small dishes served in bowls and on saucers. Those accustomed to eating in Korean restaurants offering four or five of these in a predictable vein will be astonished by Mapo's banchan. On a more recent visit in early spring, three friends and I received 13. Besides the obvious cabbage kimchee, shredded daikon pickle, and cucumber salad, we got sweetened shavings of dried squid, boiled eggs, and chiles in soy sauce, sweet potato noodles with slivers of vegetable, mushroom stems in a tart salty dressing, sweet thick swatches of tofu skin, and ripply cubes of something amusingly called devil's tongue jelly, dressed with scallions and sesame oil.

With every allotment of barbecue comes a panoply of accompanying dishes, plus unlimited rice.

Each dish was like a little adventure, though my fellow diners that evening didn't admire the potato puree that constituted a weak stab at American potato salad. These banchan serve a triple function throughout the meal: as appetizers, as side dishes, and as condiments with the grilled meat. By the way, when you run out of any of them – the long-aged cabbage kimchee is invariably gone by the middle of your repast – you should ask the waitress for more, and she readily complies.

You can almost hear a drum roll as the barbecue accoutrements arrive – a guy dashes up to the table and stops abruptly, holding with tongs a blackened metal vessel glowing with lump charcoal. Everyone pulls back apprehensively as he thrusts the smudge pot into a depression in the middle of the table, shooting up sparks into the overhead hood. Another employee installs a stainless steel grill over the live charcoal. Next the waitress appears with your meat. She ostentatiously displays the well-marbled meat, then shows us the bones it was cut from, picked clean, to demonstrate we weren't being cheated. We hadn't mistrusted her for a moment. 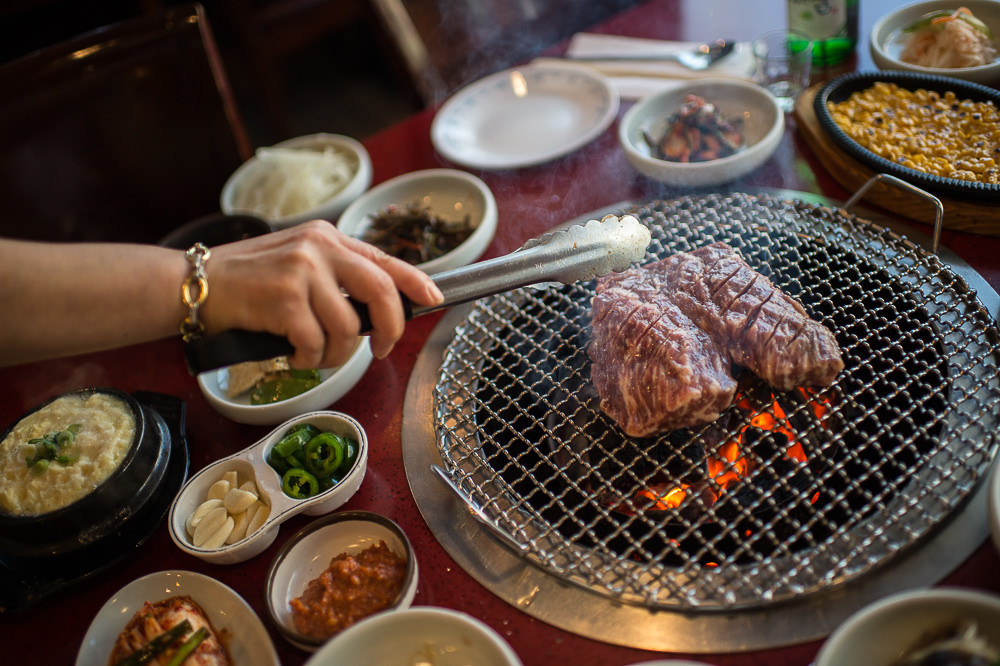 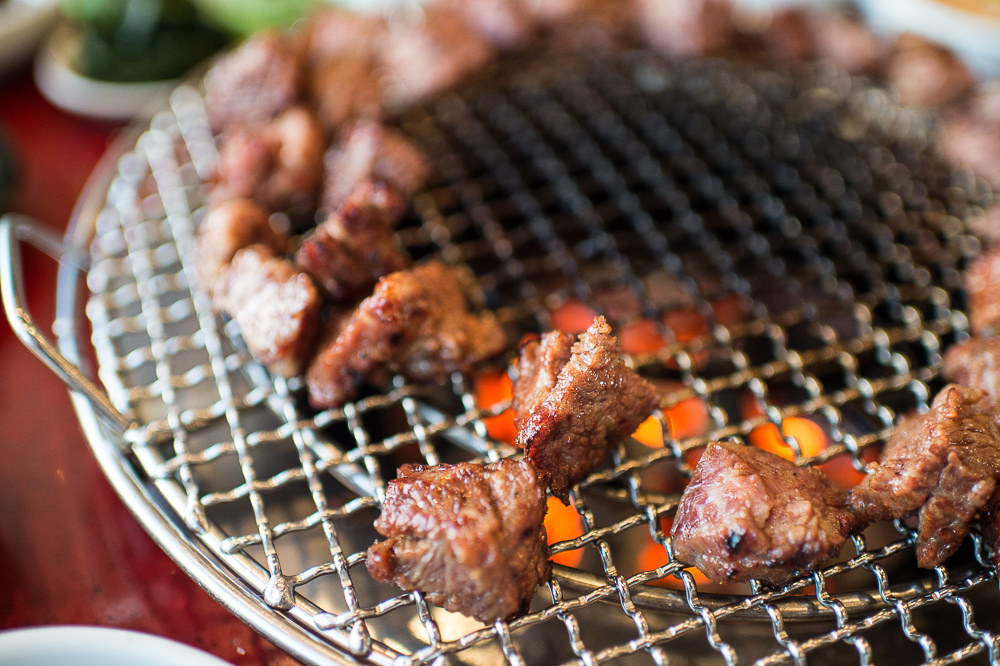 An important note: In general, you must order two portions of barbecue to be allowed to cook it at the table. Order one and they'll do it for you in the kitchen and deliver it already grilled. This could actually be good in summer if you don't want to sit on top of glowing coals. Even when you barbecue at the table, the waitress does most of the work, flopping the meat, snipping it with scissors into smaller chunks, then mounting the grill on an elevated rack and pushing the meat to the sides when it's perfectly done. At this point you serve yourself from the grill using chopsticks, or push the meat to the center if you want it done further or blackened to crispness. My advice: don't. The meat is tenderest when rare, and further grilling, while adding smokiness, can make the meat tough.

The waitress shows us the bones, picked clean, to demonstrate we weren't being cheated.

Chunks of beef or pork should be wrapped in the oak leaf lettuce provided. Smear on a little bean paste, and then add some of the marinated onions, or a clove of garlic. Indeed, some kimchee or one of the other banchan can be also included in the lettuce packet. If you get pork belly, you should dip it in a condiment of sesame oil, salt, and pepper that is provided before wrapping it in lettuce. Ultimately, there's so much meat in an order at Mapo, you may find yourself indulgently eating it with no accompaniments at all. 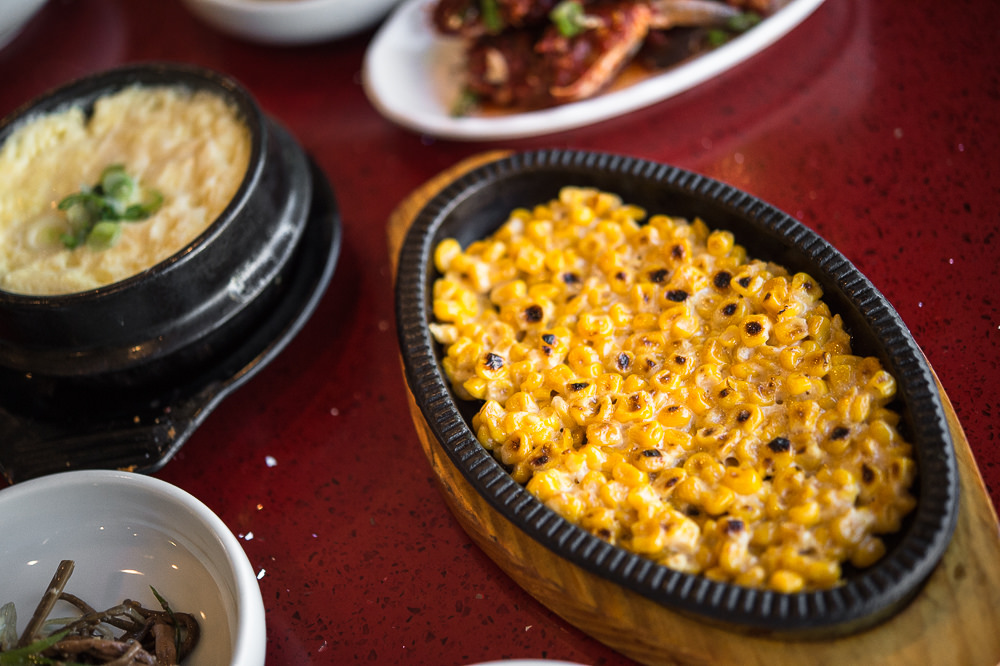 A compelling free side: creamed corn

In addition to meat and banchan, there are free side dishes, too, believe it or not. One is a sort of sizzling soufflé in a stone crock, to be spooned up like pudding; another holds soon dubu, which is fresh tofu in a fiery stew; and, weirdest of all, a platter of creamed corn like you might find at a potluck church supper. You'll never go hungry at Mapo, but you may feel overwhelmed with all the details of what is essentially a prix fixe feast.

But other dishes beckon from the menu, too. The mandoo gui dumplings ($14.95) are clearly homemade, and available either in soups or pan-fried (pick the latter). No vermicelli inside, but finely chopped greens and shredded pork. These are not part of the meal, but must be ordered separately. Other house specialties include the spicy red stews called jigaes; the seafood, tofu, or kimchee pancakes known as pajeon; steak tartare; and various noodle and seafood stir-fries. You don't really need these dishes, volume-wise, and it's nearly impossible to specify when they should arrive during your dinner. In general, they just mean a distraction from the rest of the voluminous meal. 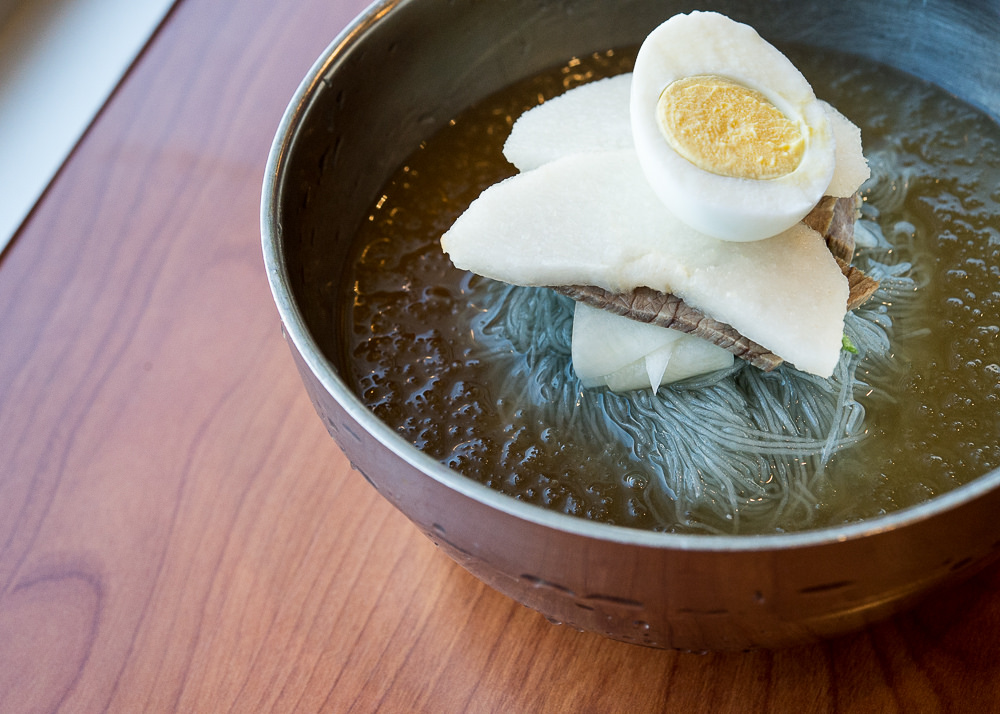 So skip them, with one exception besides the mandoo: The usual conclusion to a meal of Korean barbecue, which is all fire and smoke, is a cooling bowl of mul naeng myun ($17.95), either with or without broth. The fine-bore buckwheat noodles are pleasantly frigid and slippery, and the waitress snips them in the bowl with sliced beef, boiled egg, and Asian pear. Order them, and if you happen to not be Korean, or have Korean friends along with you, she'll look at you with renewed respect.

Cost: Dinner for four, with mandoo gui, a few beers, and a shared serving of naeng myun afterwards, $160 pre-tip.

What to drink: Beer (try Korean beers Hite or OB) and soju (a distilled sweet-potato beverage something like weak vodka)

Bonus tip: If you don't have a friend with a car, the easiest way to get to Mapo is from Pennsylvania Station via the Long Island Rail Road to the Murray Hill stop (ride in the last four cars). The restaurant is steps from the station.

Our review of Mapo BBQ

Cost: Dinner for four, with mandoo gui, a few beers, and a shared serving of naeng myun afterwards, $160 pre-tip.

What to drink: Beer (try Korean beers Hite or OB) and soju (a distilled sweet-potato beverage something like weak vodka)

Bonus tip: If you don't have a friend with a car, the easiest way to get to Mapo is from Pennsylvania Station via the Long Island Rail Road to the Murray Hill stop (ride in the last four cars). The restaurant is steps from the station.